Art as a Herb

Good morning, how'd you sleep? That's good. You snored by the way. Also, you said some really strange stuff through the night, some of it was pretty offensive. I think it might be a good idea for you to speak to a counsellor about it, but ok, we can talk about that after coffee, I'll put the kettle on, in the meantime though it's great that you're awake now because I have two exciting things to tell you! 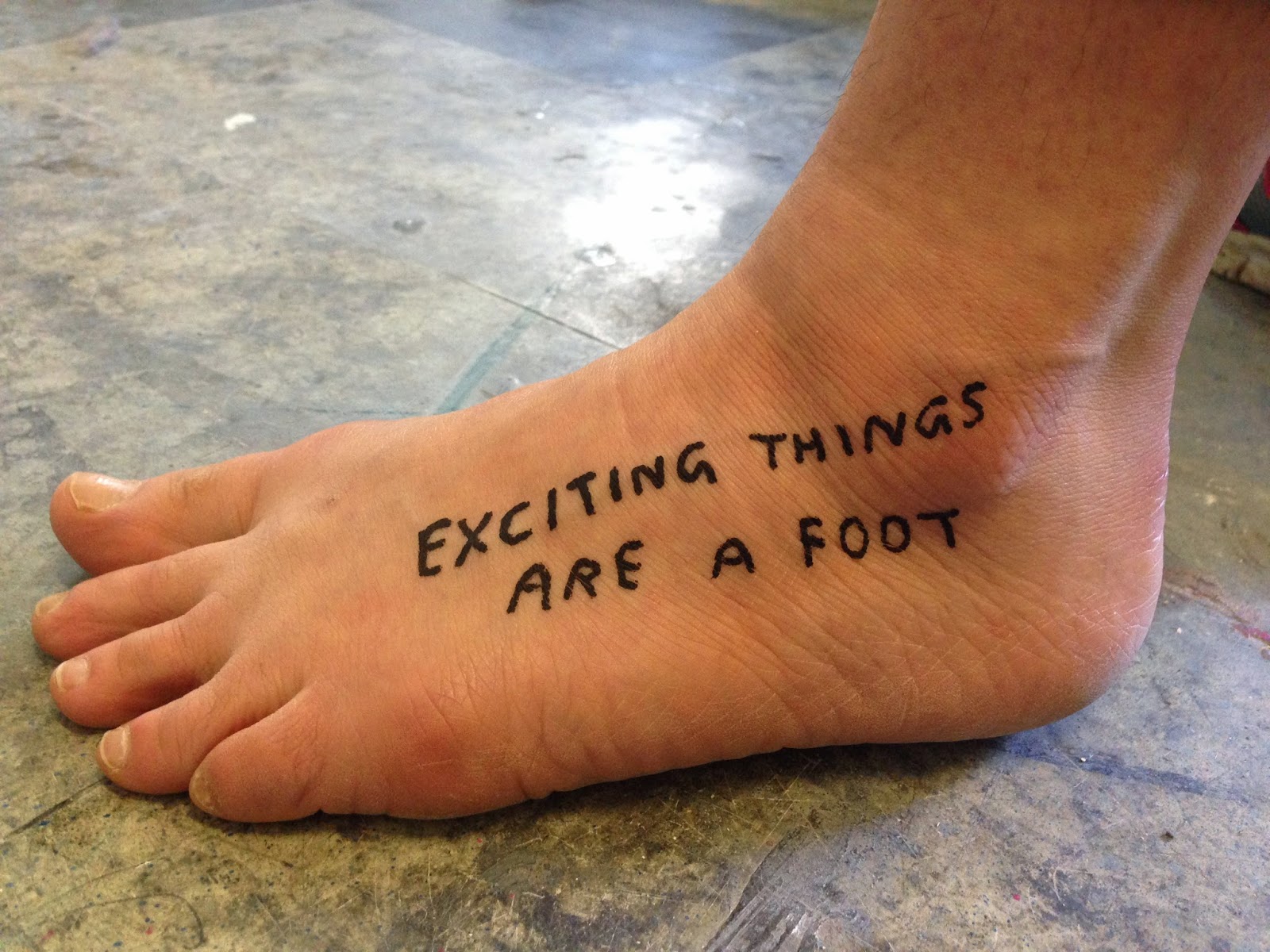 On a side note, if you're thinking about getting a tattoo on your foot, maybe this is the tattoo you should get.

(If you're thinking of getting a tattoo on your shoulder you should probably get this as well, although it'll be less of a pun. Some people hate puns though, so maybe you'd be into that.)

The foot in the photo isn't mine in case you're wondering, I drew it on the foot of my great studio pal Alanna. Here's a photo I took of Alanna showing off your potential new tattoo to some guy she was talking to. 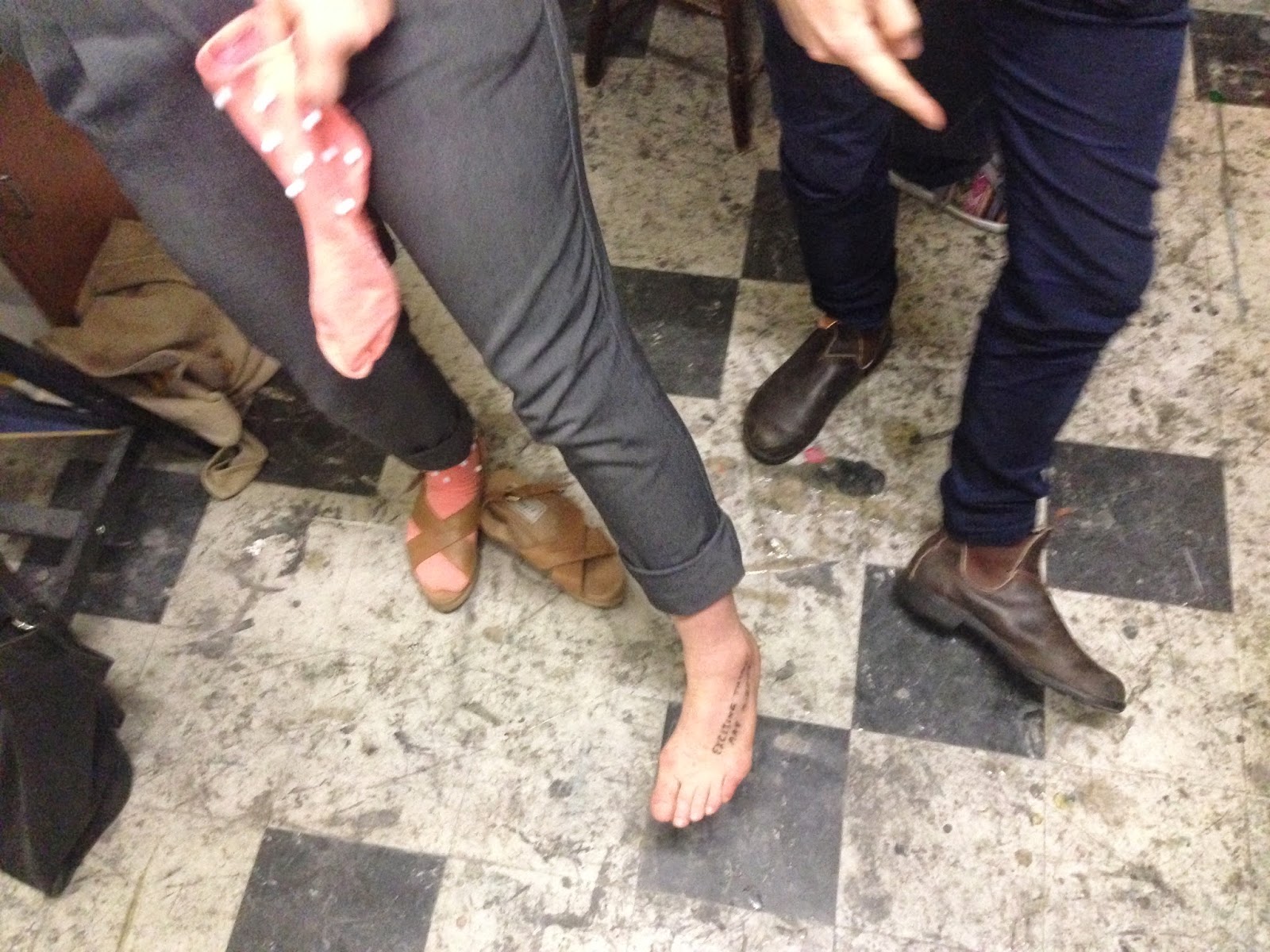 I'm pretty sure after she showed it to the guy the two of them have fallen madly in love and are probably planning a weekend holiday in Tasmania as we speak. Or maybe they never spoke again, I'm not sure which I wasn't paying attention, what I am sure about though is that if you want love and success then I think this is the tattoo for you.

Anyway what was I talking about? Oh right, I've got two things to tell you! They're both very exciting and very delicious! (Well, actually only one of them is delicious.)

The first thing is that I'm in the next exhibition at MUMA, (the Monash University Museum of Art)!

Amazing right?! Far out. Let's give that a second to sink in... 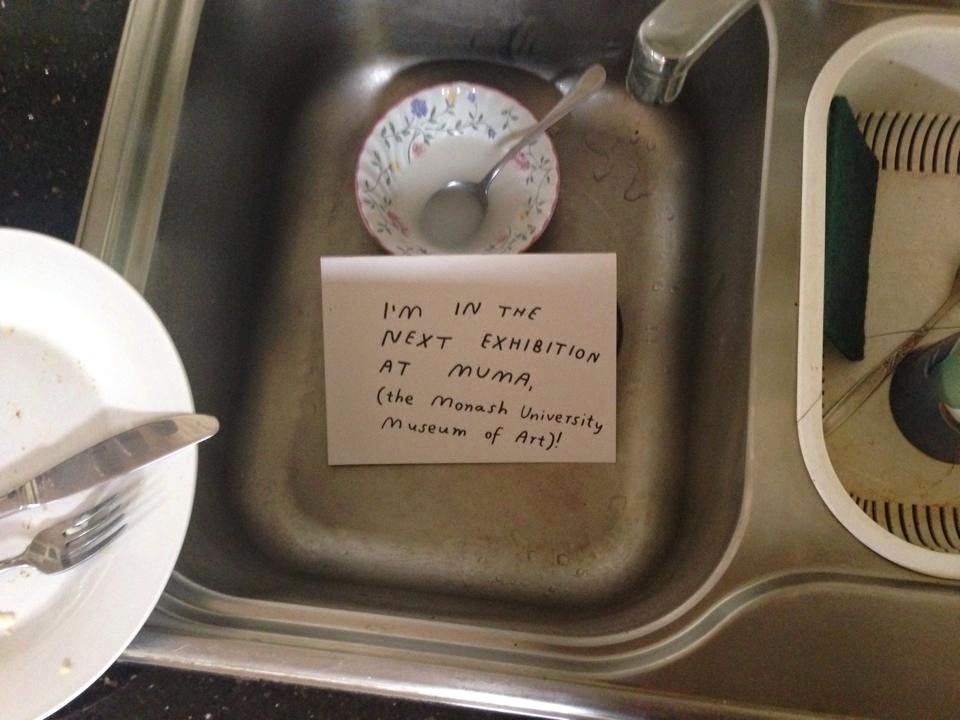 Ok now that we've let it sink in, the next thing you need to know is that it opens today! What are you doing today? As in Saturday, October 3? Cause if you're free then please come along to the opening from 3-5pm.

The show has been curated by Charlotte Day, Francis E. Parker and Patrice Sharkey, and is presented in association with the Melbourne Festival.

The name of the show is "Art As A Verb" and so basically the theme is action based art.

I guess I'm a pretty action based kind of artist, as seen here in this photo of me fighting a gladiator at the Colosseum. 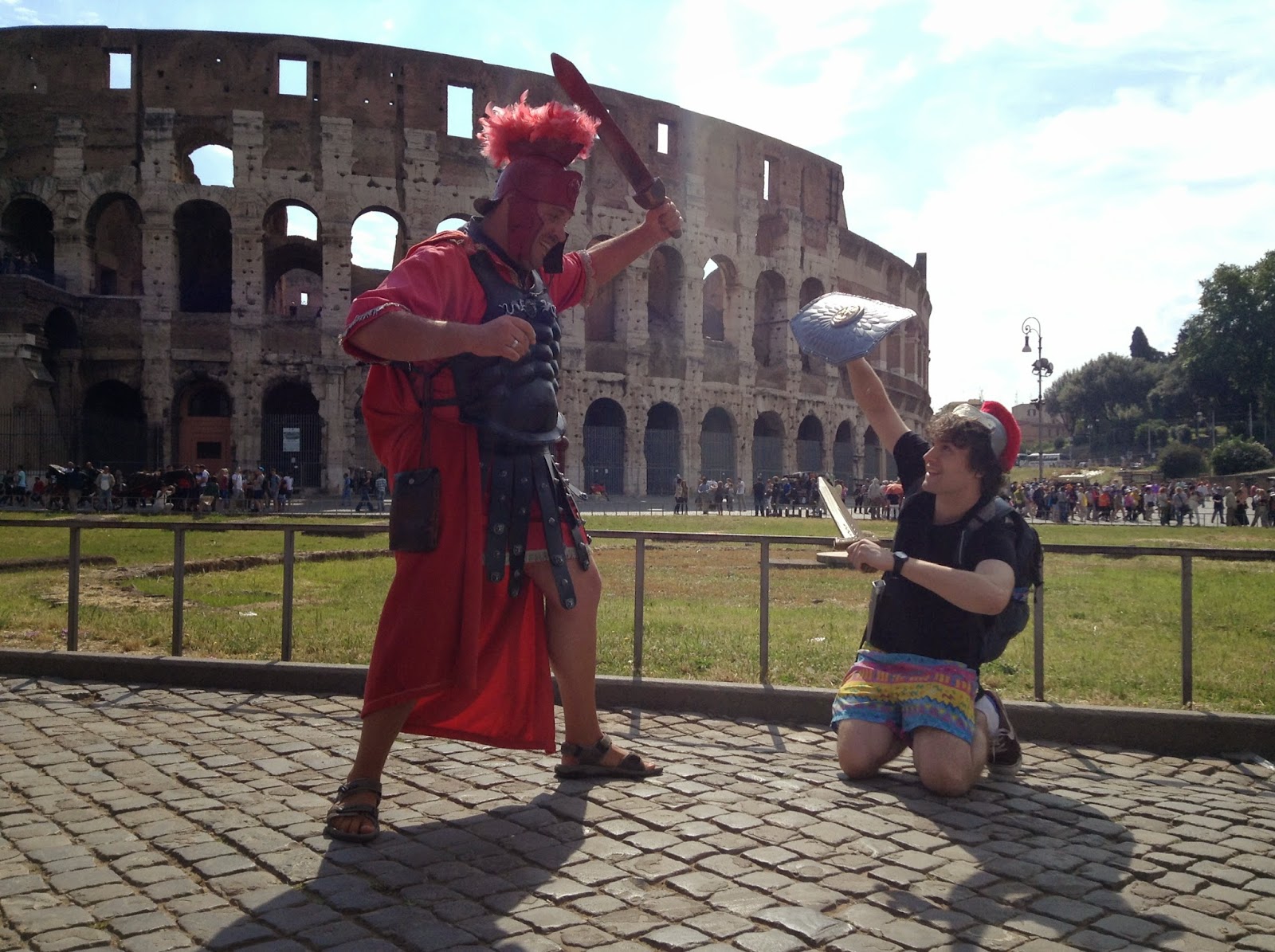 (The real action based aspect of that situation came after the photo was taken when the Gladiator and I had to agree on how many euros I owed him.)

As I said, Art As A Verb opens today, but if you can't make the opening it runs until December 16th.

I've always loved MUMA, and so to be in this show is really a little bit of a dream come true.

Oh and hey, on top of that, look, Art Guide magazine put it on their top five shows to see this week; 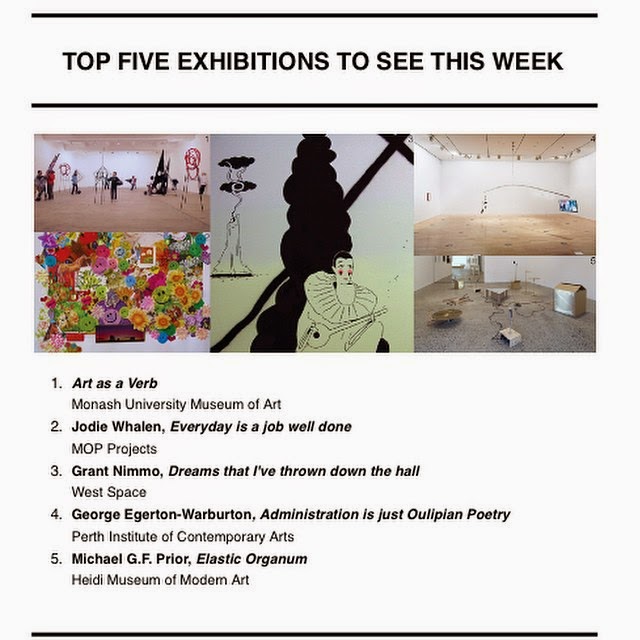 Ha, of course being in the top show to see this week has absolutely nothing to do with me, but it does have a huge amount to to do with the fact that some AMAZING artists, some of my heroes in fact, are in this show; you may have heard of Claes Oldenburg, who makes big plaster food, or Martin Creed, who turns a light switch on and off, or Marina Abramovic, who when not sitting on a chair is dancing with Jay Z, and Yoko Ono, who single handedly split up The Beatles.

(Ha, I know, I know, Yoko didn't single handedly split up The Beatles. I love Yoko. The Beatles had been drifting apart and wanting to work on other projects involving other people for a long time coming. That's just how it goes when you travel down a long and winding road working with the same three people for ten years, eight days a week, eventually it might make you want to twist and shout.)

Here's the complete list of all the incredible artists (and also me) who're in the show;

The last thing I'll say about Art As A Verb today, (because I wanna give you time to go do your hair, put on pants and come to the opening), is that you can click on this part of the sentence if you'd like to read the generous write up that it got on The Thousands, written by R. Smutt.

So ok, the other thing I wanted to tell you in this blog post I'll just mention really briefly, both because I don't want to take any attention away from the MUMA exhibition and also because it's not nearly as interesting as the MUMA exhibition, is that I realised I've been using instagram wrong all this time.

Instagram isn't for photos of my art, it's for photo's of my food, and so for this month of October I've stupidly committed myself to posting a photo of every single thing I eat.

I'm not sure if this is possible, and I am sure that anyone following me will pretty quickly stop doing so, but if for some reason you're the kind of tasteless weirdo who wants to know everything I eat, then you're in for a treat.

My best bud Tom commented on one of my photos at the end of the first day and said "You eat a lot less than I do. And you eat a lot more healthy." And I answered that yeah I think I'm eating less so I don't have to post as often, and also I'm eating healthier than usual because of it as well. Obviously by doing this project it is altering the way I eat, I think it would be ridiculous not to acknowledge that.

At the end of the second night I posted a photo of the Sultana Bran I was eating and my friend Sarah wrote "Eat more greens!" Ha, and so I think maybe that's the point of this as well, to have people be able to say things like that to me.

I think the hardest part about it is making sure my phone's always charged. Right now it's 10.30am and my phone is as flat as a... I don't know, pancake, that's the expression isn't it? Pancakes aren't that flat though. They're at least a good 4 to 6 mil. The ones I make are pretty thick because I like to put in banana, blueberry and bacon. I haven't made them in a while, maybe I will, and if I do I'll be sure to instagram it.

I actually hate this idea already. It's exhausting and I feel very exposed. But I'm committed to it now and hopefully the month will fly by. Actually one nice thing that happened around about midnight last night is I posted a photo of the peanut butter sandwich I'd just made; 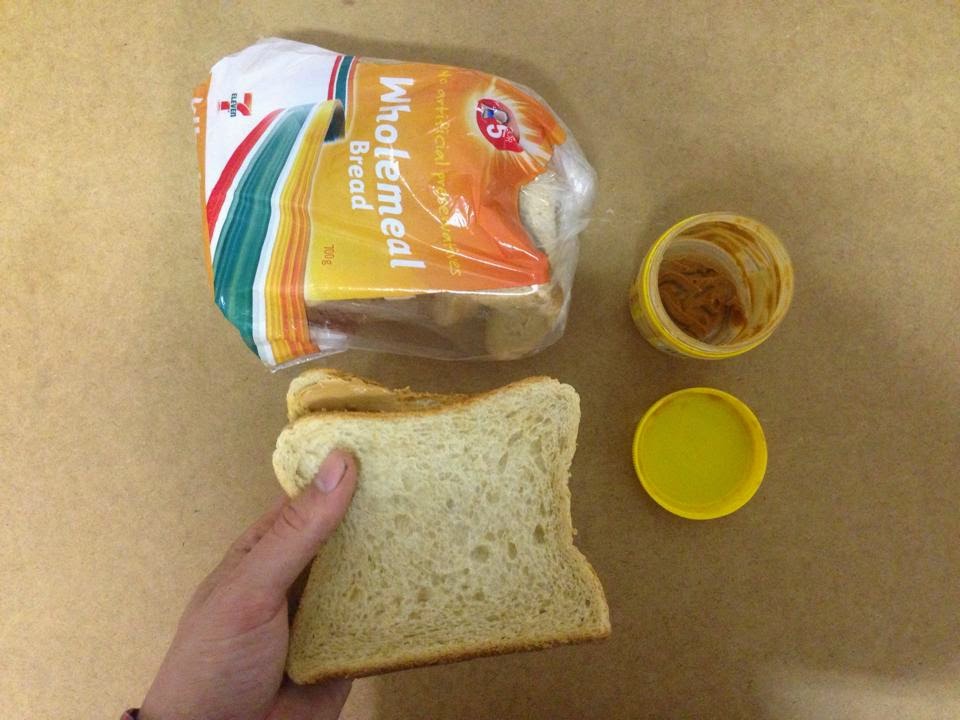 and ten minutes later a person named Ruth in Los Angeles posted a photo to me of the peanut butter wrap that she was having at the same time for breakfast. 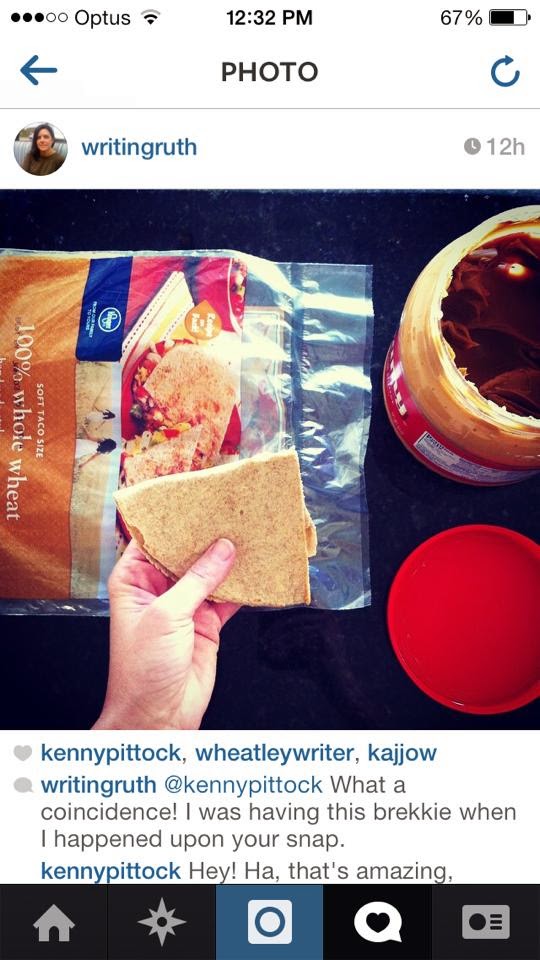 Ha, anyway I know it's no big deal for two strangers on opposite sides of the world to be eating peanut butter at the same time, but it's kind of nice to be able to acknowledge it.

But ok, I hope I haven't bored you too much at the end of this post. I'm pretty tired. I should go look directly into the sun or something to wake up. It's a beautiful day, please come to MUMA, (Building F, Monash University, Caulfield Campus, 900 Dandenong Road, Caulfield East), and see this incredible show that they've done such an wonderful job putting together, and yeah, come say hi and let's have a beer.