Good morning students, I just thought I'd write a quick blog post to let you know if you happen to be around Melbourne Uni during the next couple of days you can see eight big drawings of mine hanging in the window space in front of George Paton Gallery in Union House.

Also around Union House is work by Melbourne artists Sean Peoples and Georgina Lee. The show is curated by Catherine Reid, it's titled "So... about that brief", and basically for it Catherine asked each of us to respond to the university.

With this in mind I included eight drawings, blown up in scale to fit the unique space, that I drew back when I was at uni where I probably should've been paying more attention during classes, lectures and artist talks. 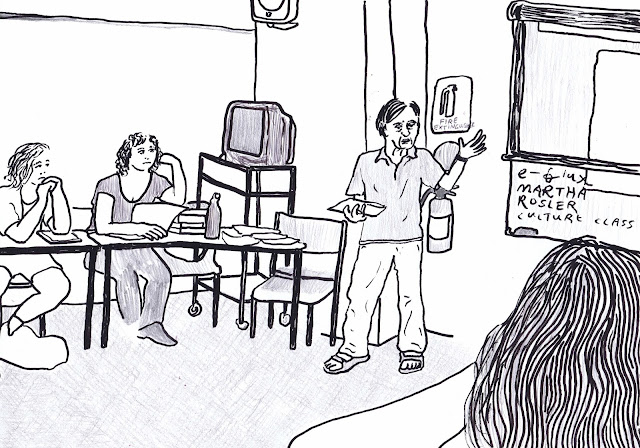 The exhibition "So... about that brief" is open only briefly, so briefly in fact that there's only a few days left, but there's a closing celebration with free drinks and snacks tomorrow night between 5 and 7pm, come say hi!

This sentence is a link to the facebook event thing.

And to give you a brief look at the show, here's some guys checking it out while a woman in the background charges her phone. 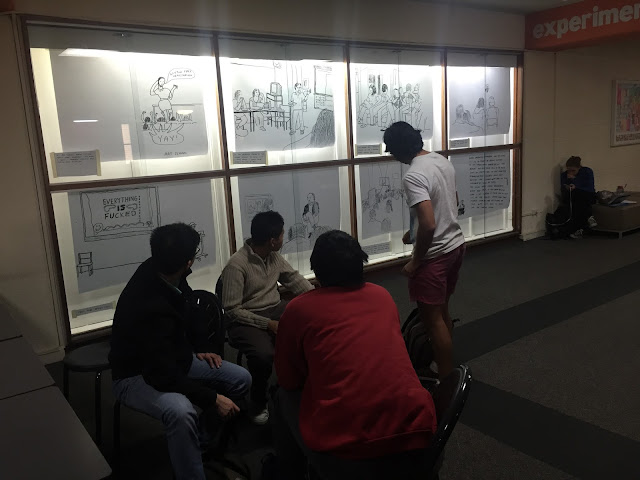 Here's another photo of the show, the two people on the right leaning against the window were very publicly breaking up which was pretty sad, although they were doing it in front of my drawing titled "Girlfriend and boyfriend and lecturer" which made it just a tiny bit funny. 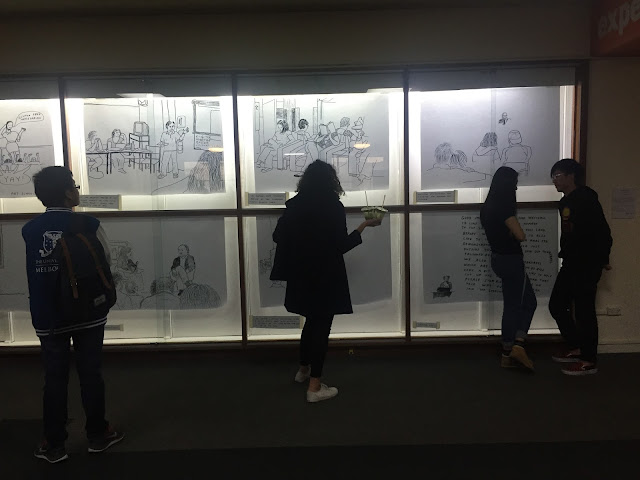 And really shaking things up, here's my pal Hanann enjoying four green shakes while looking at my drawing of a Paul Yore artist talk. 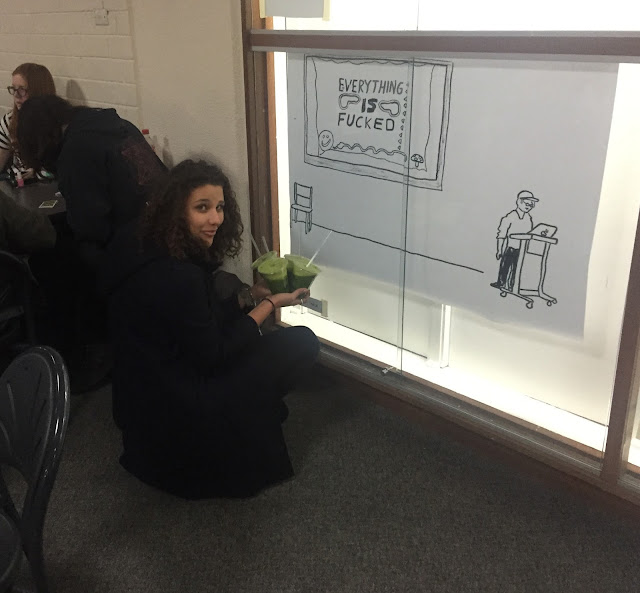 I would've loved for Paul Yore to see the show but unfortunately he's currently on a research based trip in Europe. I was feeling pretty good about my life until he told me that, now I'm just super jealous of him.

Ha, no, I guess cruising around Europe for the next few months would be ok, if you're into that kind of thing, but beautiful Melbourne is still the worlds most liveable city, and so I actually kind of feel sorry for Paul, after all, he didn't get to experience the thrill of standing in the freezing cold today and missing a train because he had to wait in line for twenty minutes to top up his myki at the Melbourne Uni tram stop. 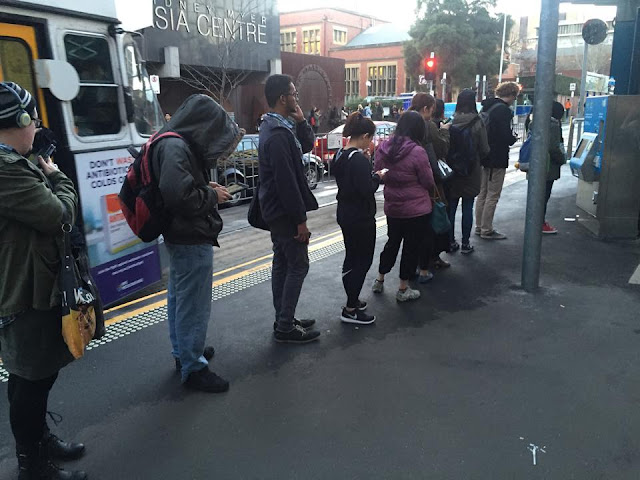 Ha, but aside from Paul Yore another person who appears in one of the drawings in the show is the brilliant writer Justin Clemens, featured in this drawing titled "The Justin Clemens lecture was packed. I got a pretty good spot up the back although I couldn't see his head because it was blocked by a TV". 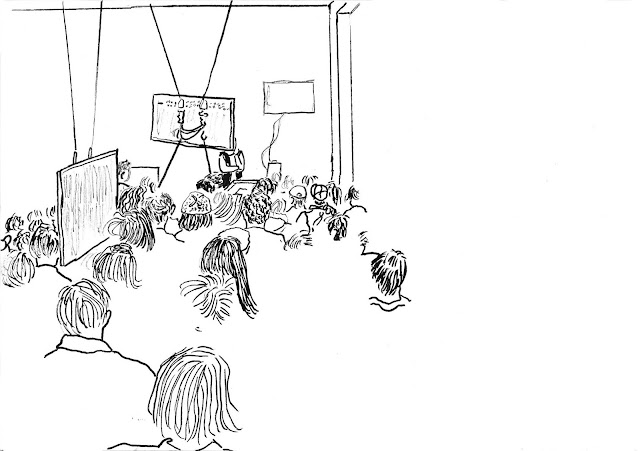 Click on this sentence to read the blog post "When life gives you Clemens", where I talk about the time I made this drawing.

Here's a photo of the drawing of Clemens head being blocked getting blocked itself by two people by eating lunch in front of it. 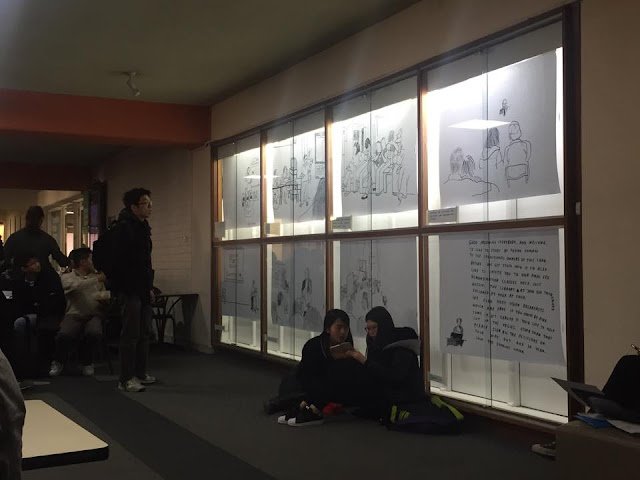 And here's a photo my buddy Christina sent me of the Justin Clemens drawing being blocked by someone holding balloons. 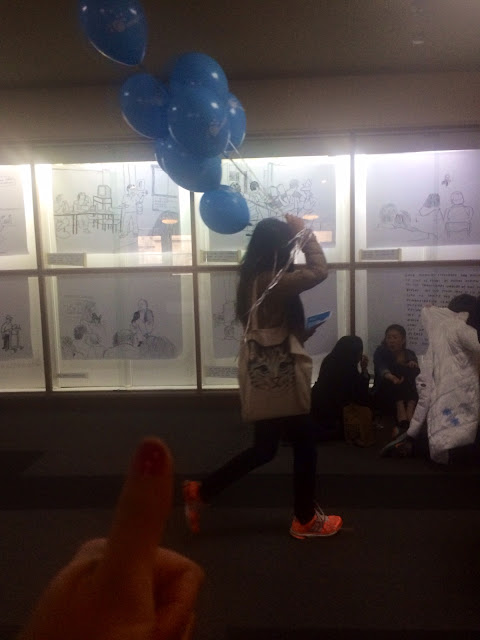 Amazingly, Justin Clemens actually saw the show, (so cool!), and here we are hanging out in front of my drawing of him. 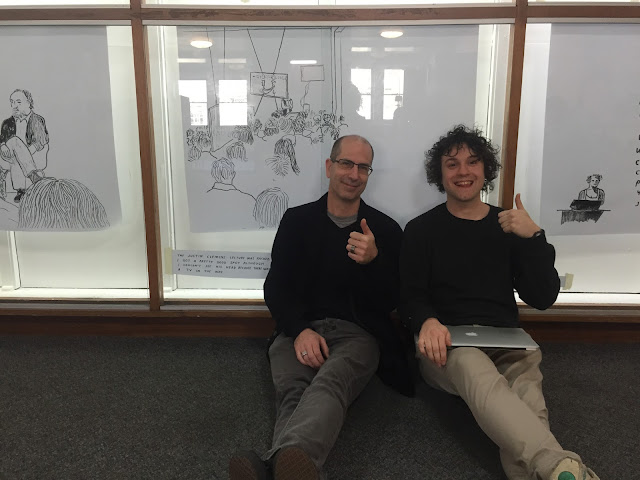 But you probably don't recognise him in that photo of us because in it you can see his face, so here I am using my laptop to block our faces. 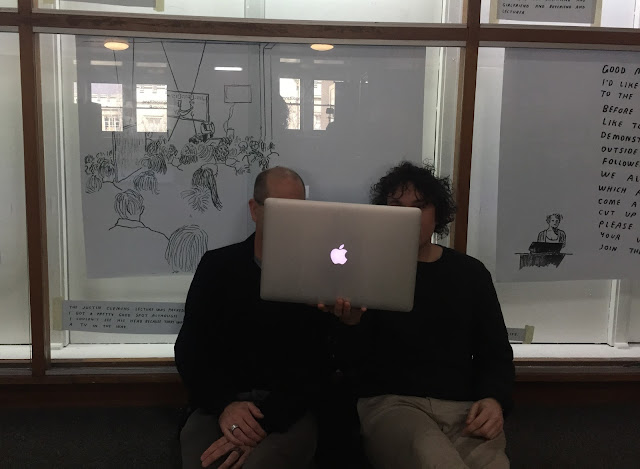 (Big thanks to Hanann for taking the photo and Justin for being in it.)

Ha, but yeah, "So... about that brief" is on for just a few more days, it's open 8am to 9pm so hopefully you're able to get there Justin the nick of time and have a look. The show came about very last minute but I'm really happy with it. I think one day I might even like to turn this series of drawings into a little book or something.

Speaking of which, immediately after I deinstall the drawings I'm heading to Sydney for the weekend as I have a stall at the VOLUME Art Book Fair at Artspace. VOLUME is being presented in partnership by two the publishers Perimeter Books (from Melbourne) and Printed Matter (from New York, New York, it's a hell of a town), and there's heaps of my favourite galleries and publications involved, click here for a full list of all the stall holders.

It's gonna be heaps of fun so if you're around Sydney for the Art Fair and Spring 1883 then don't forget to please turn up the volume, turn up to VOLUME and come visit me!

VOLUME opens this Friday night from 5-9pm, then is open Saturday from 11am-7pm and Sunday from 11am-6pm. This sentence is a link to the facebook event for that.

In the meantime though school's out for ever and so's this blog post, thanks so much for reading, hopefully see you at George Paton this week or at Artspace this weekend, and to finish up for today here's one more of my drawings that's currently on show at Melbourne Uni, it's acrylic on paper and is titled "The mature aged students arrived at the classroom forty minutes early". 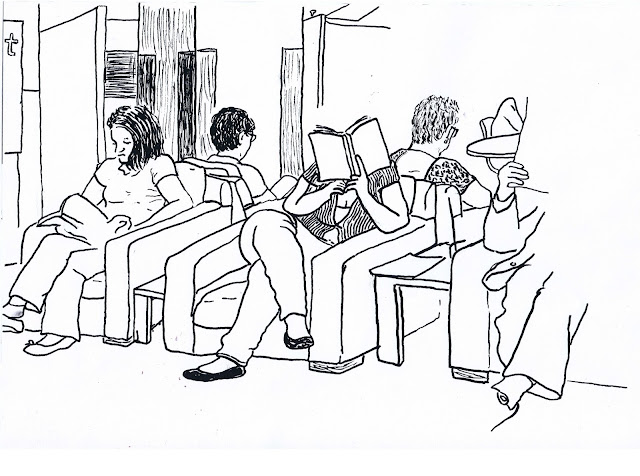 (Ha, what's not mentioned in the title of course is that for me to make the drawing I clearly arrived at the classroom forty minutes early as well.)
Posted by Kenny Pittock 1 comment: