It's better to be TAFE than sorry

Hey! Far out, this year is going so fast, I mean, it's already the middle of April!

But April schmapril, let's talk about July. Miranda July that is.

A few weeks ago I, (and fifteen hundred other people), was lucky enough to see a talk at Melbourne Town Hall by Miranda July, (the brilliant American artist/writer/film maker/superwoman).

In the weeks leading up to the talk I made a ceramic sculpture of Miranda July's latest book. Here's a detail shot of my painting of the cover; 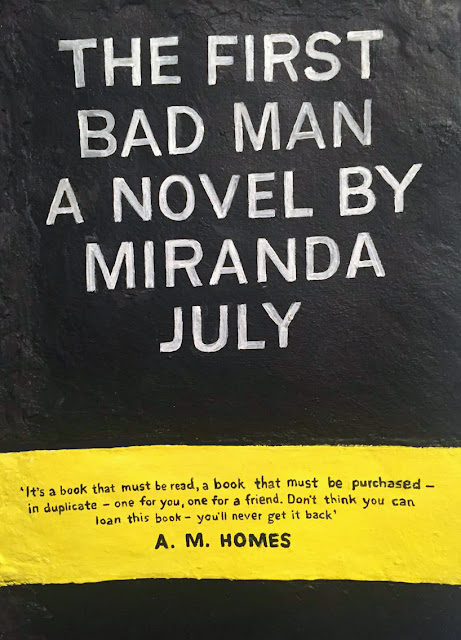 After the Miranda July talk here's a photo of me lining up to meet her, carrying my sculpture in a shoebox and feeling very nervous. 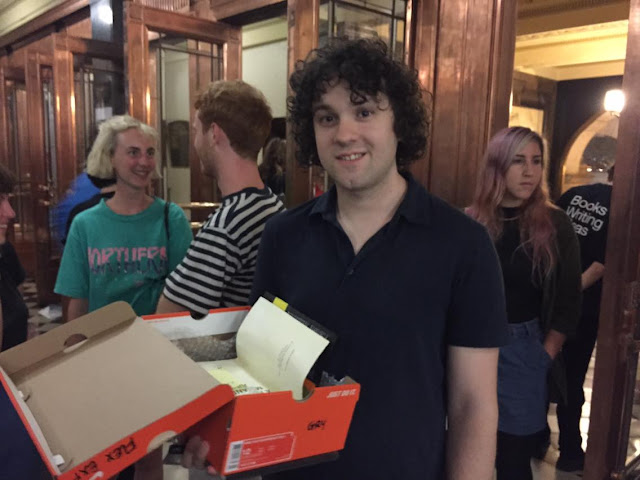 They say don't meet your idols but Miranda July was definitely an exception, she was super cool, super kind, and also super generous about my sculpture.

She even got out her phone, took a bunch of photos of my sculpture and told me "you should feel pretty special because I've just had to delete a video I recorded for my son so that my phone has enough space to take these photos". 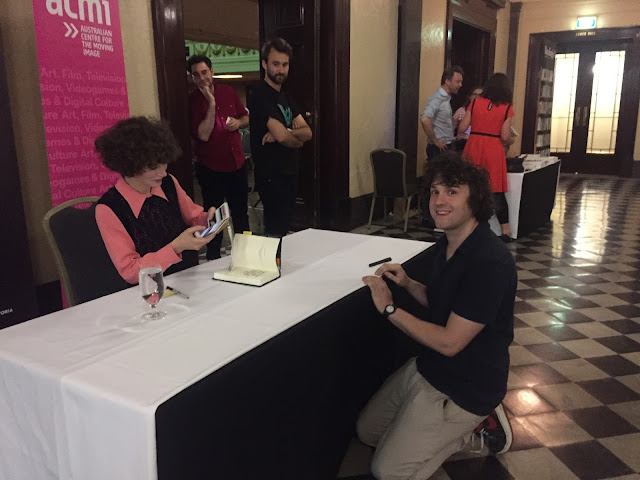 After that she handed me her phone and asked me to take some photos of her signing the sculpture, (which I very happily did, while resisting the urge to use her phone to call my phone and thus getting her number).And the most amazing bit of it all, later that night Miranda July posted one of the photos I took for her onto her instagram!

But so yeah, after hearing Miranda July's artist talk I left feeling all inspired about how good an artist talk can be, which was great timing because the morning after that I went back to my old TAFE and gave an artist talk of my own to the Swinburne first year visual art students.


My talk went pretty well I think and the students were really great, although secretly I was hoping that they'd all be skinny as a rake and have straightened their hair, just like me when I was in first year TAFE, as seen in this very cool photo from 2007. 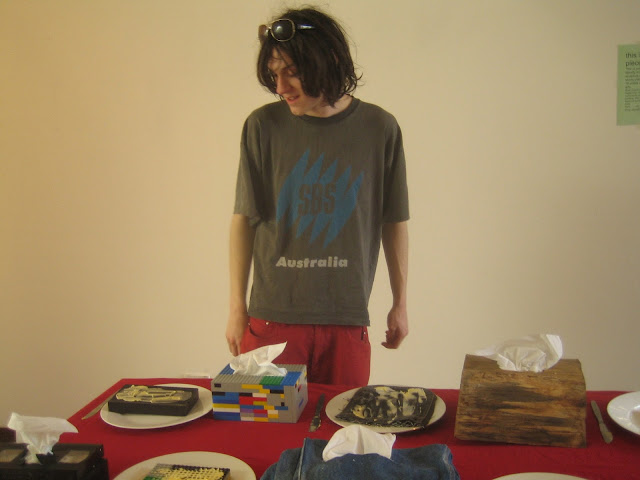 The next thing I want to mention in this blog post is that I've got a nice selection of work in a group exhibition that's on now at the gallery in the Melboune city library. The exhibition is titled PLAYFUL and has been curated by Sophia Cai as part of National Youth Week.

The library gallery is at 253 Flinders Lane, the show features a bunch of really great people and is on until April 29. A massive Frank you to Frankie magazine for doing a cool little write up on the exhibition; click here if you'd like to read that!

Also, if you're around Melbourne next Saturday afternoon I'm hosting a free drop by drawing workshop in the library gallery space between 1 and 3pm. Come along! Here's the flyer; 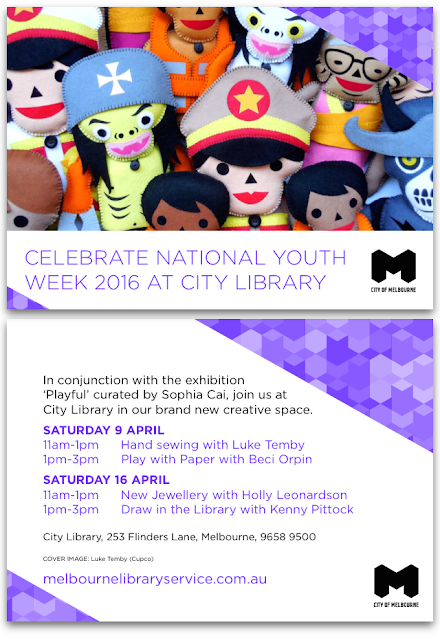 Thank you to all the bookworms who have already made it to the library to see the show, I really appreciate it and the fantastic feedback means a lot. And the same thanks also goes to you if you've managed to see the exhibition I'm in on at the Shepparton Art Museum, titled Cornucopia. If you haven't seen it yet there's still plenty of time as it's on until May 27.

A big thank you to Sarah Workmeister for writing a review of Cornucopia that was published on Art Guide, click here if you'd like to read it.

Definitely my favourite sentence from Workmeister's review is where she references that my work is exhibited next to Andy Warhol's. The review says, and I quote;
"They sit nicely together".
Super cool. I'll put up some photos of my work in the show next time, and the Warhol hung across from it, but in the meantime here's a quick drawing to give you an idea of what it looks like to see me and Andy Warhol sitting nicely together.


And if you happen to be near Shepparton on the evening of Thursday, April 21, from 6-7pm, come sit nicely together with me in person as I'll be presenting an artist talk at the Shepparton Art Museum. Here's all the info;

Also opening on the night of April 21 is the West Space fundraiser, so if you can't make it to Shepparton next Thursday then definitely help support the gallery West Space and head along to this. I've got three new little paintings hanging in the fundraiser exhibition, plus there's like a hundred other artists showing work too. Here's the full list; 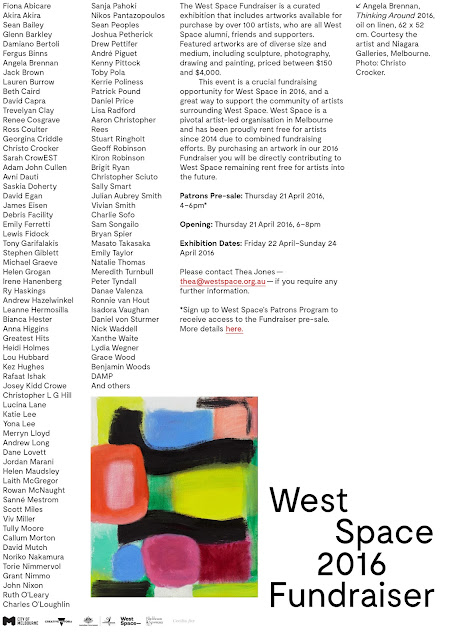 And the last date I want to mention, particularly if you're in Sydney, is I have a solo show at Gallerie PomPom in Chippendale, opening on Wednesday May 4th, (and running until May 29). Please come!

The show is titled A series of self poor traits.

As you can probably gather from the title, the show is loosely based around self portraits. I figured I'd do this because I'm clearly an egomaniac, but also because even though I've shown my work in a bunch of awesome Sydney galleries over the years, they were all in group shows, and so it's only polite that with my first Sydney solo show I should try to formerly introduce myself. Kind of like how Eminem's first hit single was "Hi, my name is". 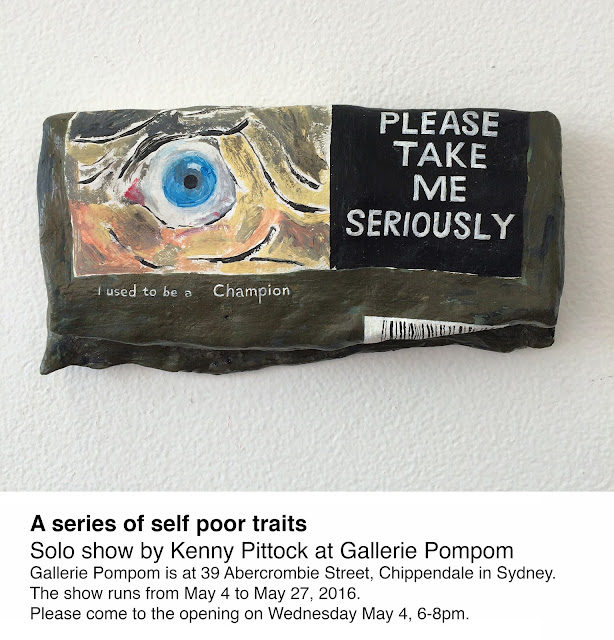 So in conclusion; here are the dates for your diary;

Wednesday May 4, from 6 - 8pm.
Solo show at Gallerie Pompom in Sydney opening,

And since I started this blogpost off by talking about my sculpture of a Miranda July book, I'll bookend this blogpost by sharing with you another ceramic sculpture I've recently made of a book.

This time the book I've replicated is a phycological thriller titled The killer and the slain, which was written in 1942 by Sir Hugh Walpole. (If you happen to have read it be sure to let me know!) 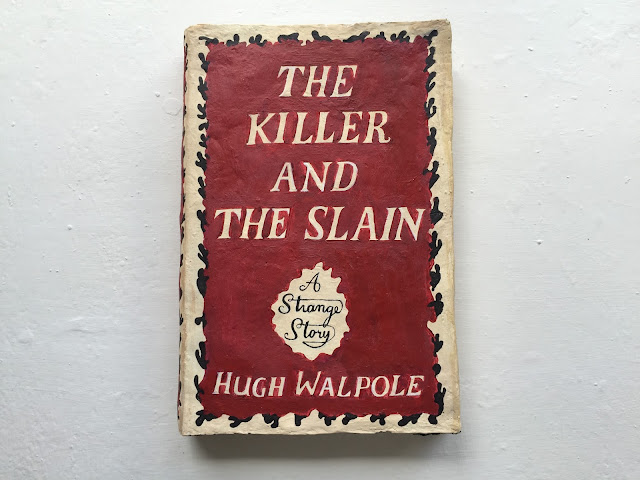 I made this sculpture for a woman who was wanting a replica made of her late husbands favourite book. And so yeah, this sculpture really means a lot to me, not just because I'm very proud of how hard I worked on the piece, but also because it was such an honour to be invited to create such a very special commission.

Here's a photo of me holding the actual book with my ceramic sculpture in the background. 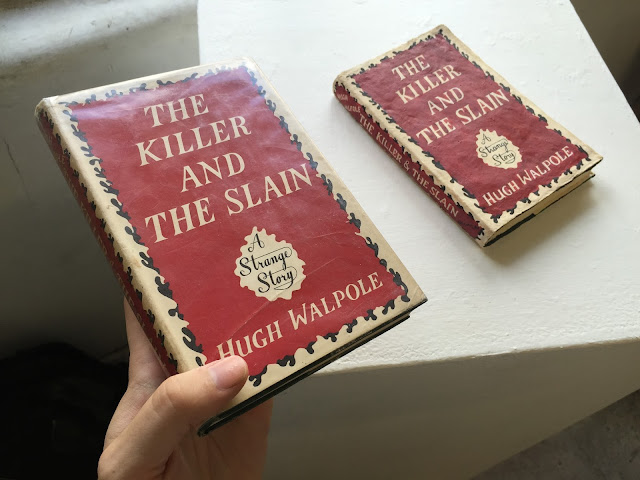 And here's the reverse; this time the actual book is in the background and I'm holding the sculpture. 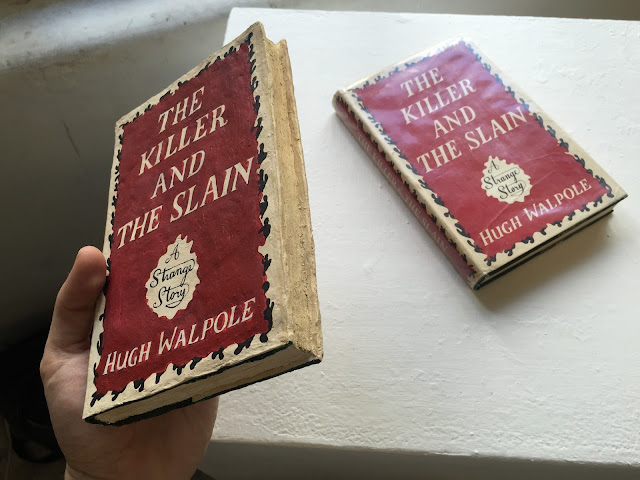 And finally, on an unrelated note to finish off this blog post, just for fun, here's a photo taken last week at the National Gallery of Victoria of me, my Mum and Whistlers mother. 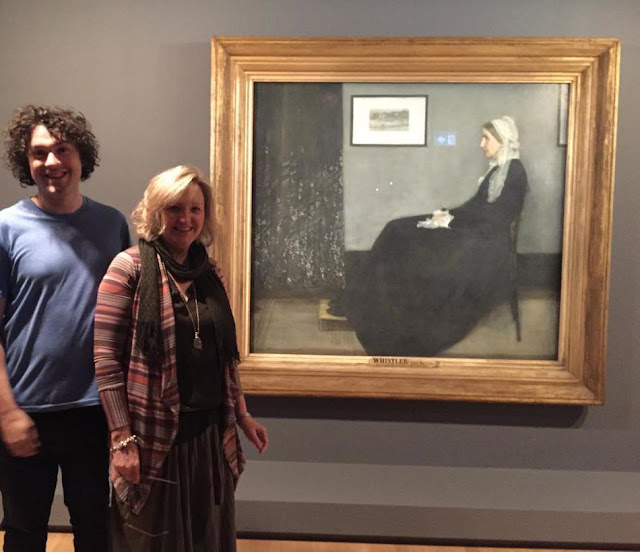 Thanks so much for reading, keep on whistling, keep on mothering, and hope to see you soon! 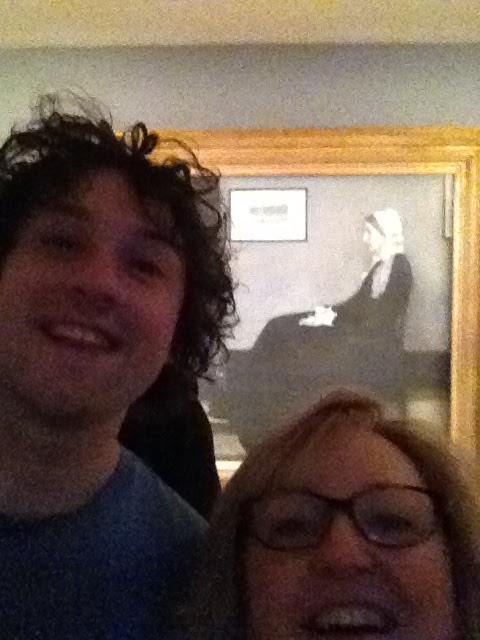