I didn't plan on seeing any of the windows, it just worked out that I did.

SPOILER ALERT, they're all the same.

But that's ok, because they're all great.

Anyway, I just thought I'd say 'hi', and also, just incase you haven't been spoilt enough this Christmas, here's a photo of every single spoiler that was in the Ferntree Gully Woolworth's car park at 3.46pm today. 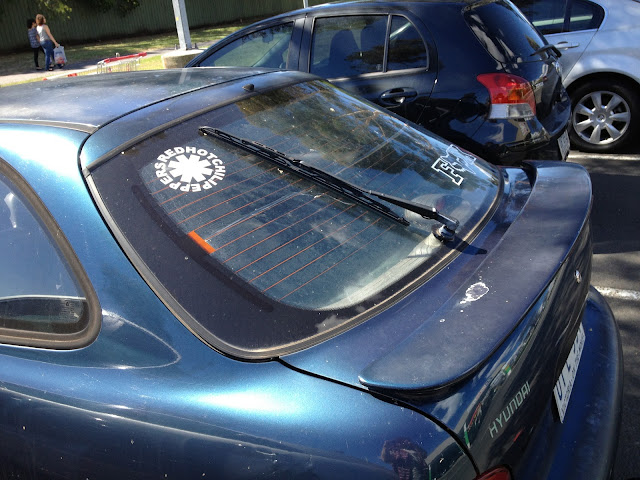 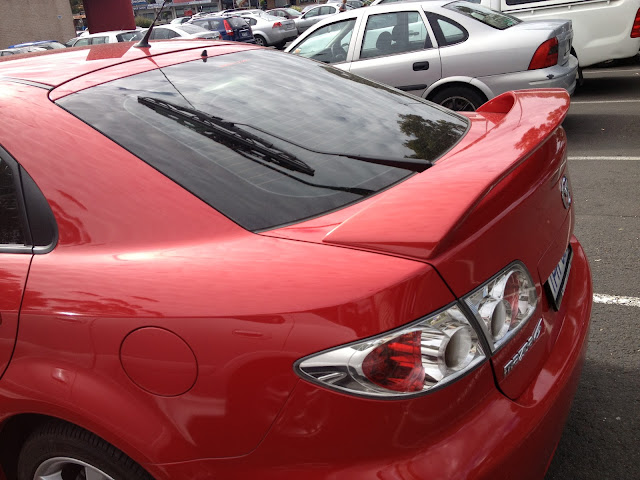 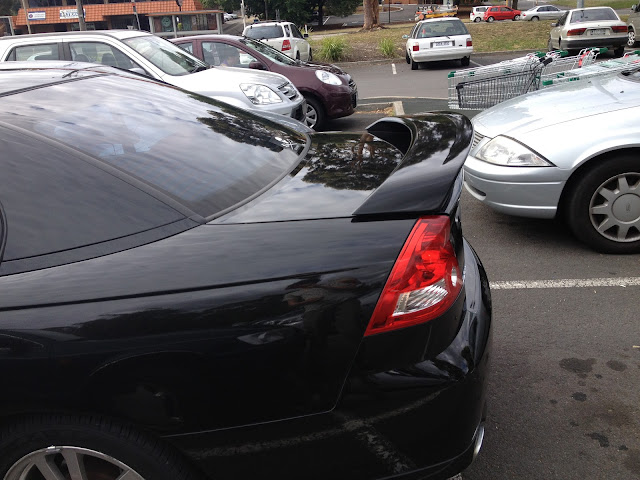 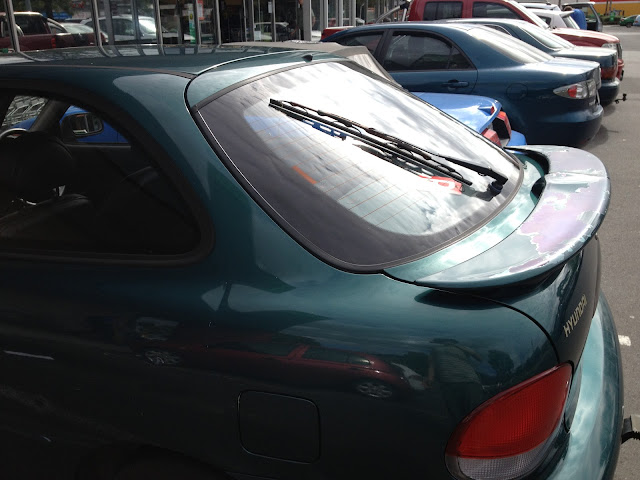 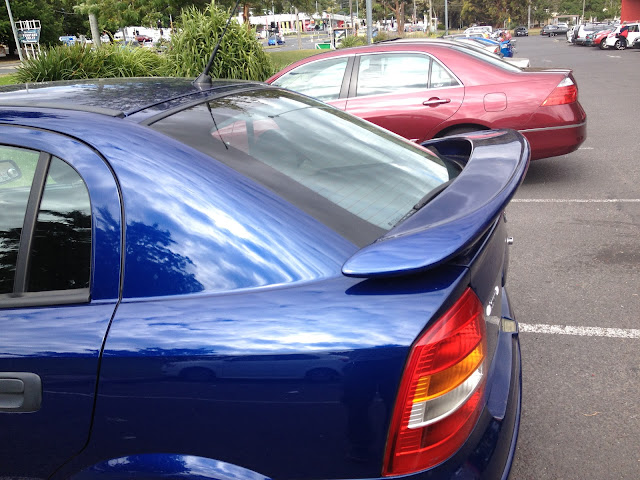 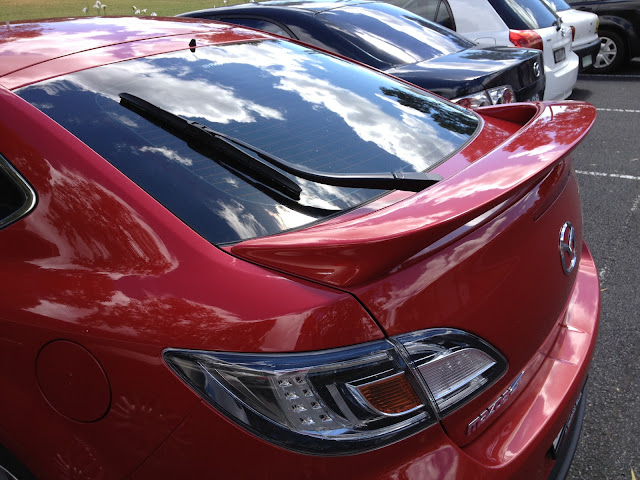 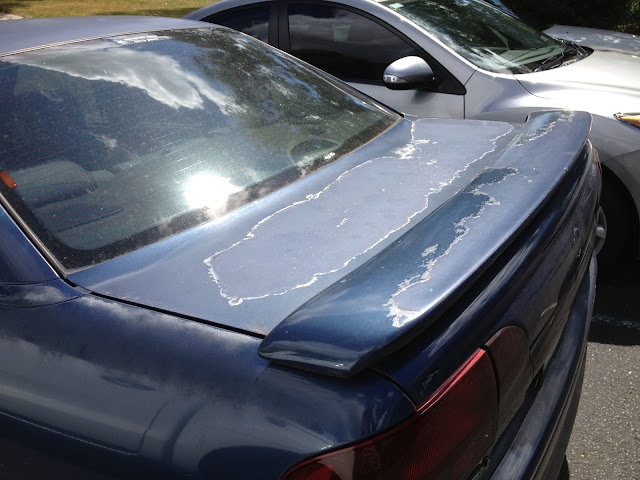 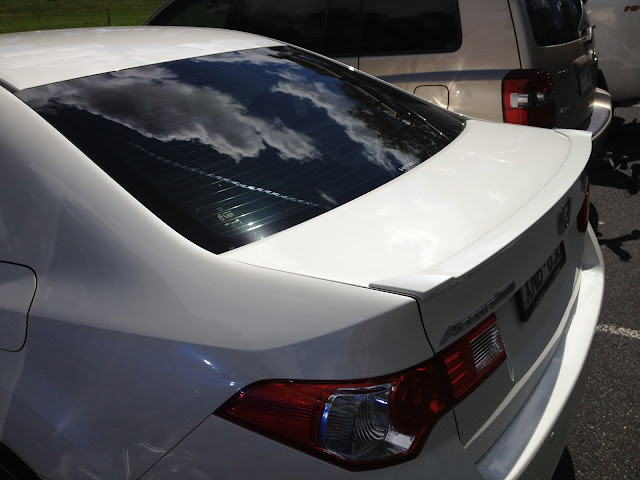 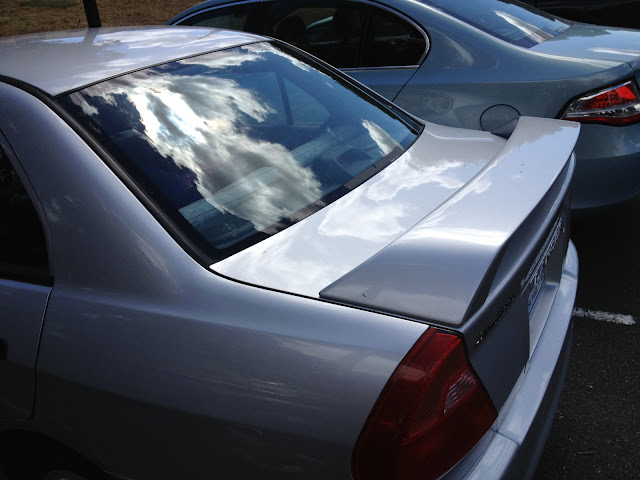 Taking these spoiler photos made me think of the Indian artist Anish Kapoor.

While I was in Sydney I saw the Anish Kapoor show they've got on at the Museum of Contemporary Art.

Here's a photo of Kapoors piece Sky Mirror that's currently installed out the front of the gallery. 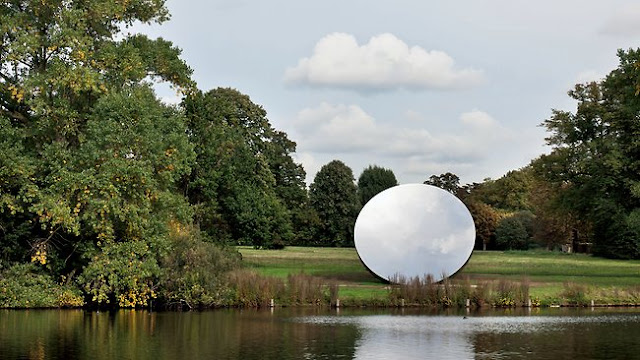 As simple and beautiful as Kapoors piece is though, I think for me personally I was just as interested, if not more interested, in looking at the sky reflected in the back windscreens of the cars in the Ferntree Gully Woolworths car park. 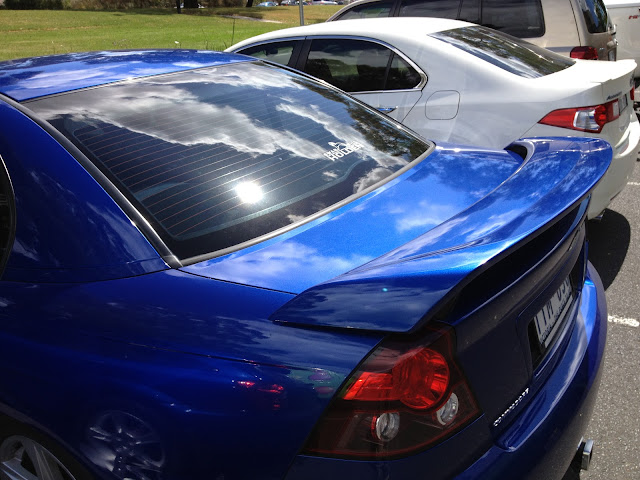 Apparently Sky Mirror cost 900,000 pounds to make, so maybe Kapoor could've just used that money to buy a really cool car and parked that out the front of the gallery.

Or I don't know, maybe not, maybe that would spoil everything.

I guess that's the difference between me and Anish Kapoor. I spoil stuff.

All my Christmas' at once

Hey. It's only six sleeps til' Christmas, but who's counting?

I'll tell you who's counting; me.

It wasn't cheap, and it took a little bit of running around, but this year I bought twenty-four different advent calendars. 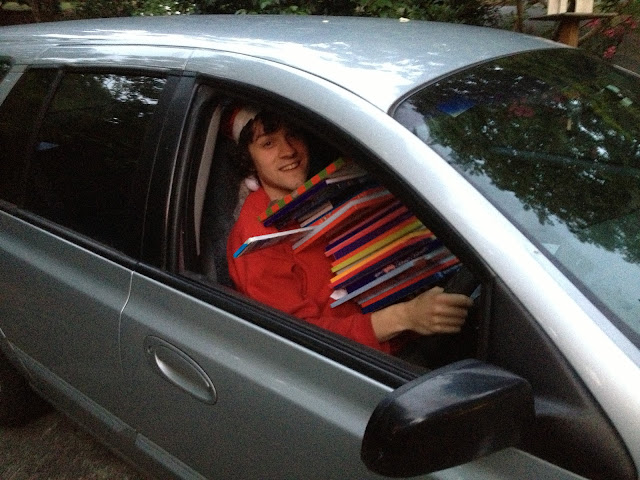 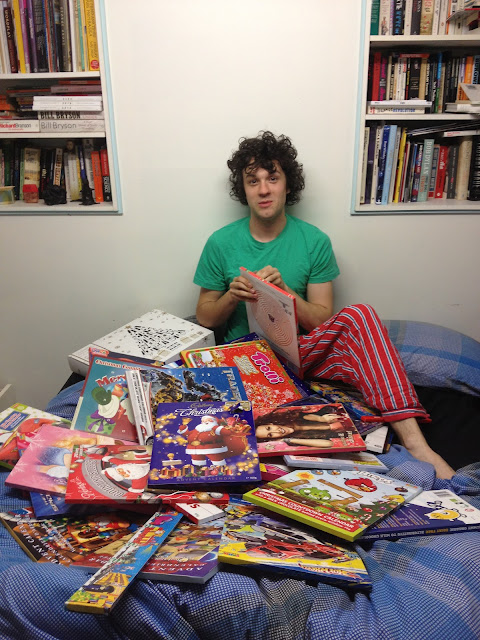 Oh and hey, as a special Kennys Christmas Trix- Turn your regular advent calendar chocolates from boring choc into exhilarating choc-mint by brushing your teeth.

Thanks for reading, see you soon, send me your old advent calendar when you're done with it, and from all of us here at kenny pittock dot com, have a great holiday season, you deserve it.
Posted by Kenny Pittock 2 comments:

Oh hi, how're you? I just got home, it's 3 in the morning, I'm writing this in blue because I just realised that this post, what you're about to read, the black writing, didn't go up today when I thought it did. That's ok, most of it is still relevant. It was a really great night, I'll write about it tomorrow, thanks so much to all my amazing friends who came, you guys are the best, I think I'll go make some tiger toast.

Hey, I should've mentioned this earlier, but come to The Alderman tonight!

It's the magazine launch of the latest issue of un. 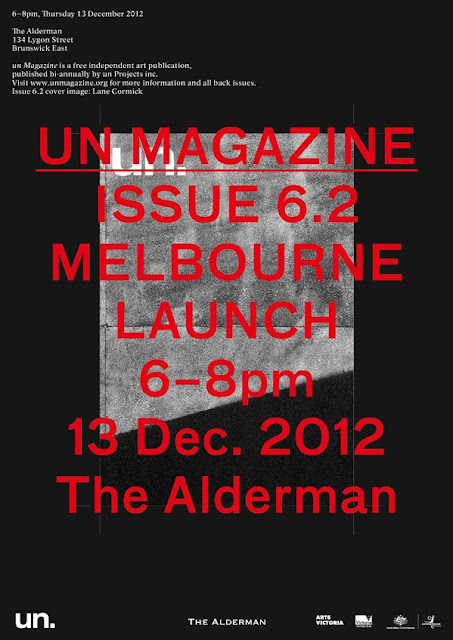 un is a biannually published art magazine. un is free. un is the best. And what's more, the latest thing that I'm very excited to brag about, is that this upcoming issue of un features an artist page by me.

The Alderman is at 134 Lygon Street, East Brunswick, Melbourne. So yeah, it's a hot day, come in sometime between 6 and 8pm, have a drink, get a free publication.


There'll be a big pile of un on the top floor, in the space where the Death Be Kind gallery used to be. There'll also be three video works playing in the space, as sort of a one night only exhibition.

One of the works is by the Sydney artist collective Brown Council, another is by Melbourne artist Lane Cormick, and the third video work is just by some guy, I forget his name, oh wait a sec, that's right, it's me.

I've always wanted to be in a show with Lane, hopefully this is the first of many. Here's a shot of Lanes video where he stacks eight million champagne glasses into a pyramid until eventually they shatter. 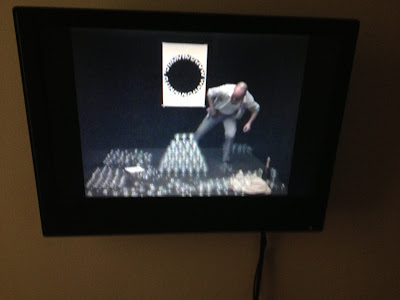 Just as I'd finished installing this piece I went down to the bar for a glass of water. As a dumb little reference to Lanes work I broke the glass and put it up against the wall in the gallery. Here's an awful photo of that. 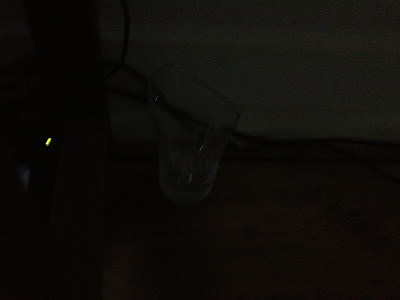 Lane told me he hoped I'd had to pay five dollars for the broken glass, like he'd had to for each of the seventy five glasses that broke in his video.

But so yeah, tonight, please come along!

If you're not from Melbourne though, the worlds most liveable city, and instead are from Sydney, there's another un launch happening just for you this Saturday, (December 15), at my favourite non-Melbourne artist run space; Alaska. 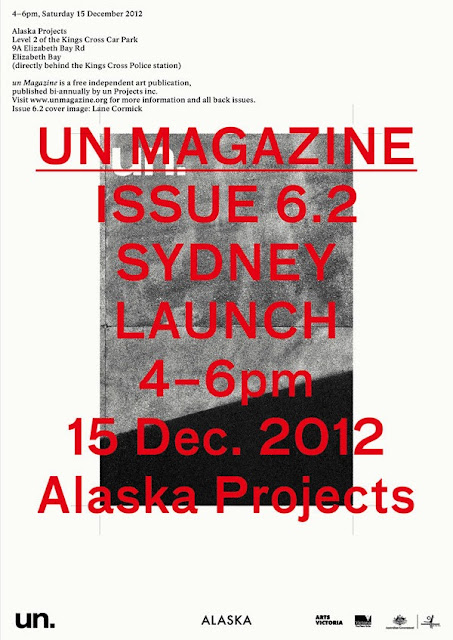 For more information, this sentence is a link to the facebook events.

Hope you can make it to one of the launches. If not be sure to get your hands on a copy of the issue. un is the best, and I'm pretty chuffed to be in the latest issue.

That's all, thanks for reading, really hope to see you tonight.

Hey, it's me again, the 3 in the morning just-got-home blue writing Kenny, I just thought you might like to know that I made the tiger toast. 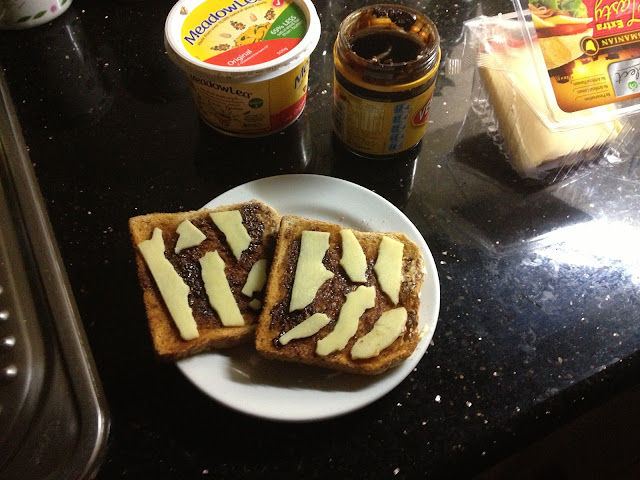 Hey, here's a piece I made a few months ago. 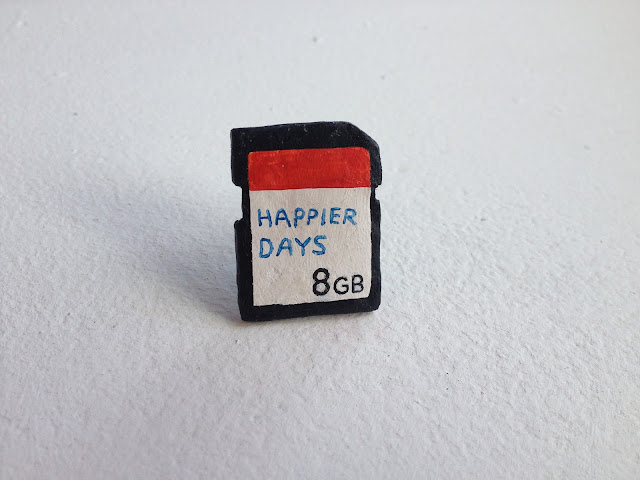 I included the piece in the Funny Games exhibition earlier this year.


If you went to the show you might've missed it, I tucked it away pretty low to the ground behind this sculpture by Anna Higgins. 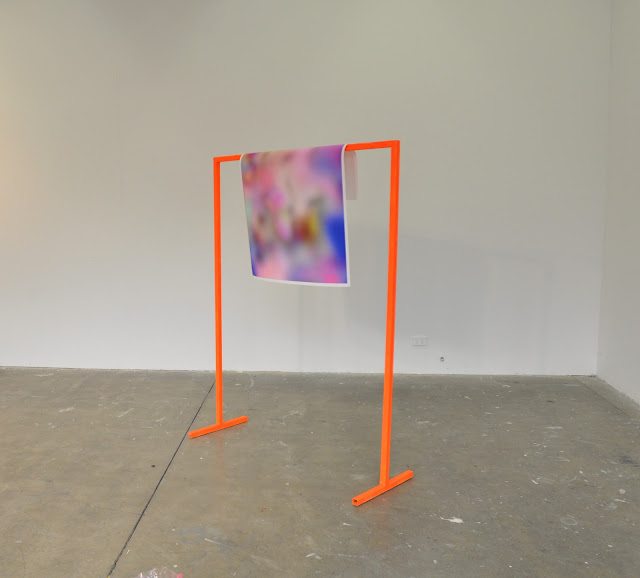 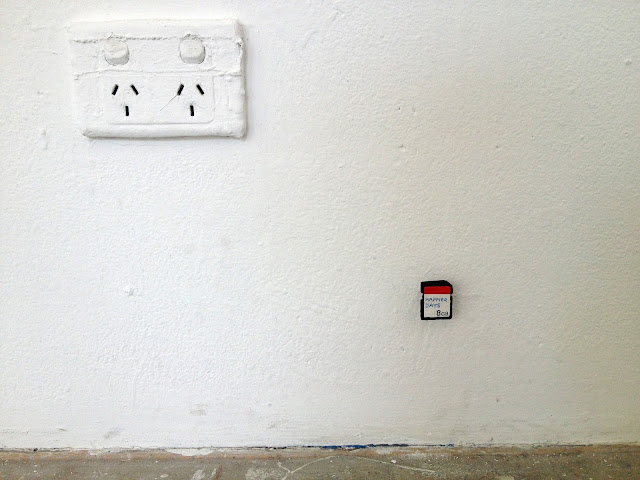 Happier days, that's what memory cards are all about right?

Either way I couldn't be happier.
Posted by Kenny Pittock No comments:

If you want blood, you got it

Hey, late last night these three drawings fell out from the back of the book I was reading.

All three drawings are of somebody donating blood.

The drawings aren't especially good or bad, but what's worth mentioning about them is that I was also donating blood at the time I drew them. 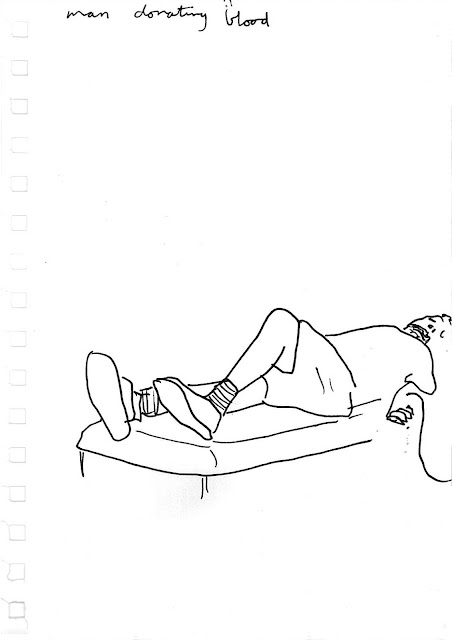 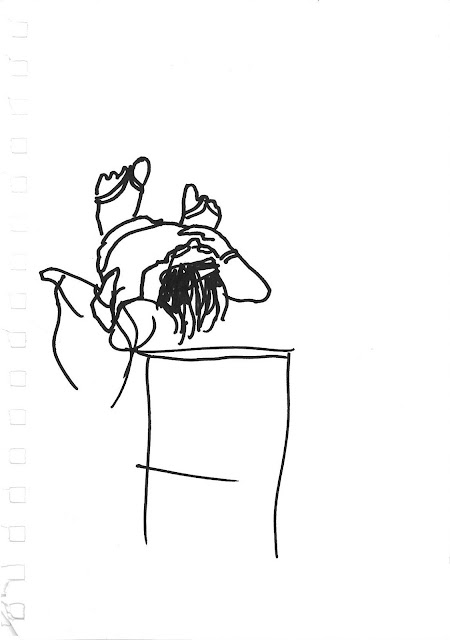 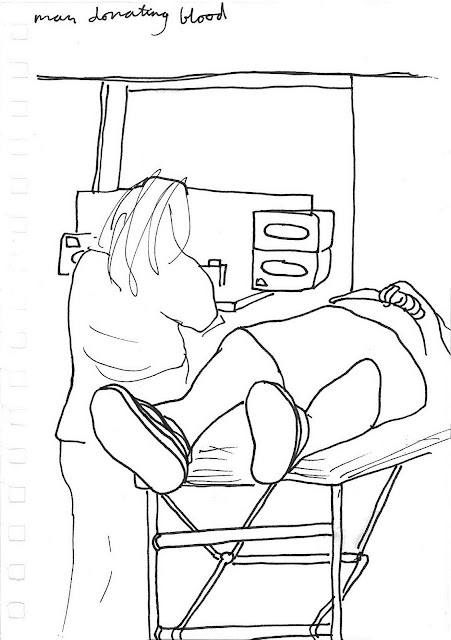 The nurse advised me not to draw until afterwards, but I assured her it was a bloody good idea. I thought I was so cool, ha, but I'm sure I just looked like a weirdo as usual.

(PS. Make me an offer I can't refuse if you're interested in buying these drawings, I'd be happy to sign the back of them in blood. Or, if for some strange reason you'd rather I didn't bleed on them, I guess I could just use pencil).
Posted by Kenny Pittock No comments:

Hey, so you know Jodie Foster? Sure you do, the American actress and film director, she's been in a million movies. I don't know many of them, actually I think Silence of the Lambs is the only one I've seen, but she was pretty good in that though hey.

Here's Clarice on a late night talk show spinning a basketball on her finger. 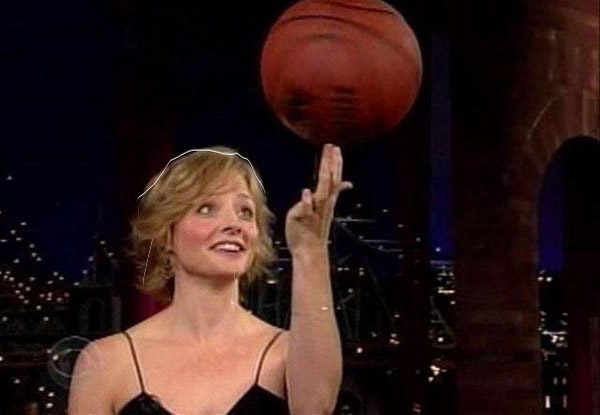 Apparently Jodie Foster also did the voice of Maggie in a recent episode of The Simpsons, although I haven't seen the episode. 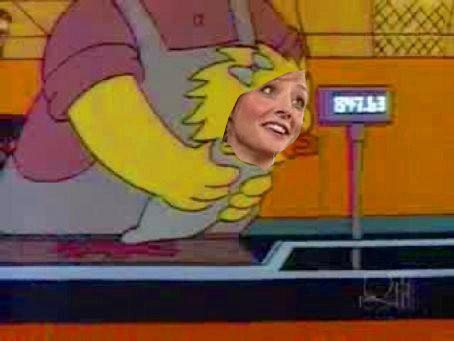 Admitting you haven't seen an episode of The Simpsons is always a bit of a shameful thing to do; we're all expected to have seen every one. Fortunately, admitting I haven't seen this particular episode; Four Great Women and a Manicure staring Jodie Foster as Maggie, is a lot less shameful than any other episode because apparently, and not to say that this is in any way a reflection on what I'm sure is an Oscar worthy voiceover performance by Jodie Foster, Four Great Women and a Manicure is the "lowest rating episode in terms of viewers in the shows history".

Since 1996 Daniel's been working on an obsessive and loving series of Jodie Foster fan art titled The Jodie Foster Archive. Here's a link to Daniels website. And here's a photo of Daniel, taken from the website. 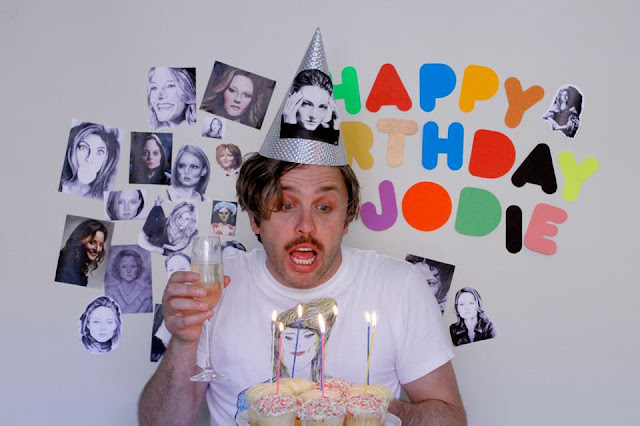 The other day, on Monday, November 19, Jodie Foster turned 50, and to mark the occasion Daniel asked a small handful of people to film a message wishing Jodie a happy birthday.

I'm very happy to say that amongst all the very talented people Daniel asked, he also asked me.

All the messages were then edited into this one 16 and a half minute video which was put onto both youtube and vimeo on Jodies birthday.

(In case you're in a rush, I'll let you know that my message starts at exactly 13 minutes in).
Thanks again to Daniel for inviting me to contribute, and also a thanks to my dear old pal Amanda for doing such a great job filming and helping me out as I struggled to control 50 helium balloons, a cordless drill and a Golden Gaytime.

After all this maybe tonight I should make a point to watch a Jodie Foster film, but realistically I'll probably just watch The Simpsons.
Posted by Kenny Pittock 1 comment: