Somewhere over the rainbow lorikeet

Hey chirpy, here's a little drawing I made of a rainbow lorikeet. 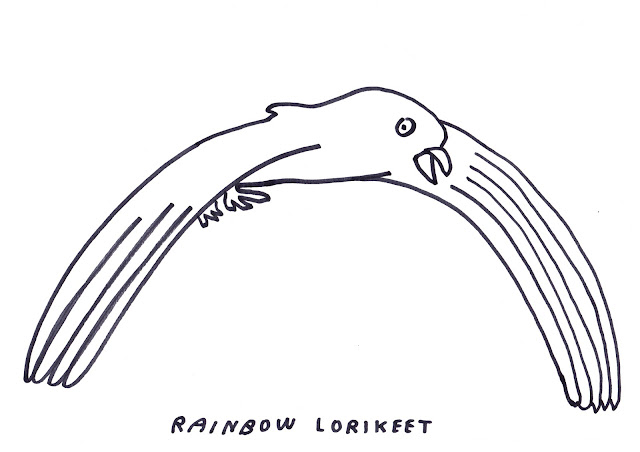 Very eggcitingly, the drawing's been included in a big group show that's just opened at the Mornington Peninsula Regional Gallery.

Here's another drawing I did, this one of an early bird catching a worm, being used to promote the exhibition on the back of a local newspaper lift out. 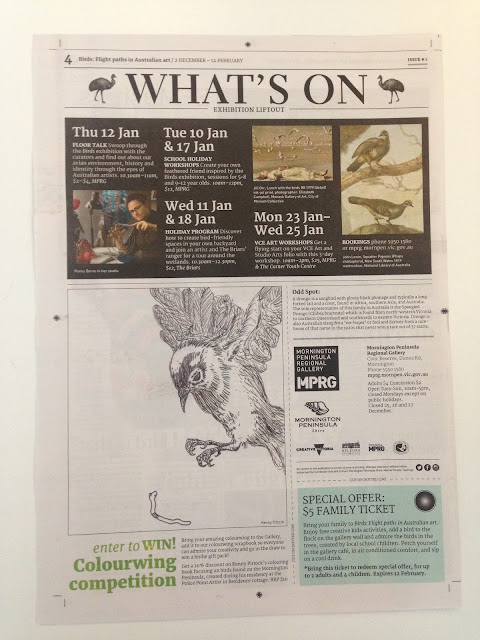 And so yeah, the show's called "Birds: Flight Paths in Australian Art" and it features heaps of eggcellent artists, including Arthur Bird
Albird Tucker
Louise Tweetver
Hen Quilty
and Flyona Hall.
(As well as me; Chickenny Pitcluck.)

Here's the flyer for the exhibition that I just found in the current issue of Art Guide Australia. 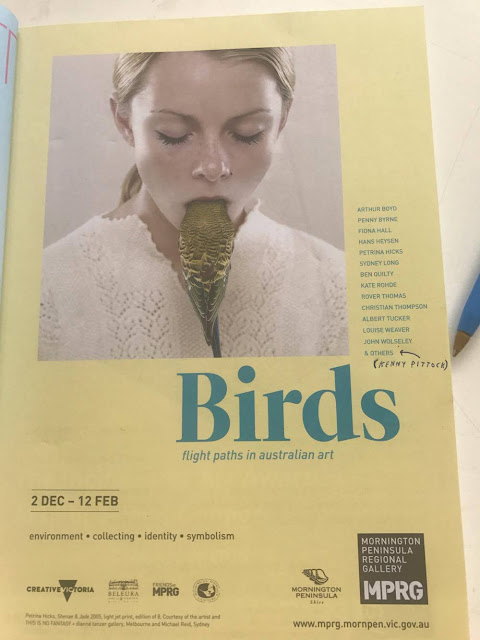 And so yeah, the eggsibition's on until Feb 12, pretty eggciting, hope you get a chance to chegg it out!

Oh and also, even more eggciting than having my drawing included in the show is that the gallery also commissioned me to make a colouring book, all about birds and my recent residency staying down in the Peninsula. The book is A4, 28 pages on nice paper, and available at the gallery for $10. (cheep, cheep, cheep!)

A huge thanks to Danny Lacy, Rowena Wiseman and everyone at the Mornington Peninsula Regional Gallery for hatching up this amazing opp-bird-tunity.

Here's the cover of the book; 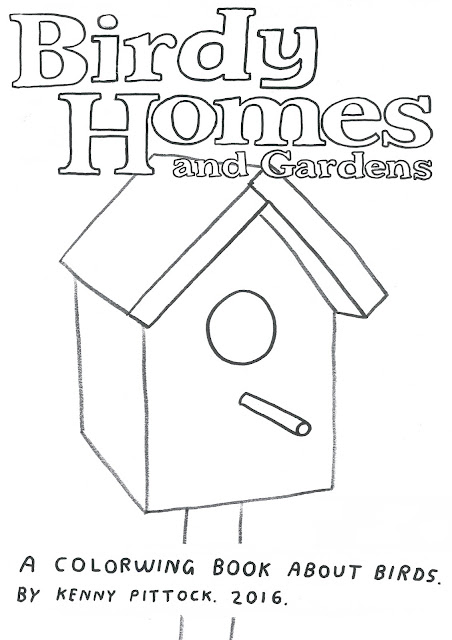 In other news, the annual C3 gallery fundraiser exhibition has also just opened and is on until December 11. For all the details of how to see this great show and help out a great gallery, click here for a link to C3's facebook event.

Here's my little contribution to the fundraiser, a ceramic piece from 2012 titled It's no picnic. 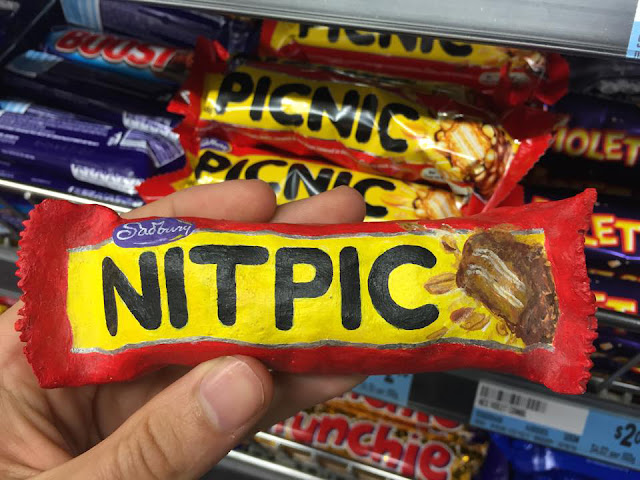 And in other news, my last exhibition for 2016 is a fun little group show titled Small Art, opening tonight (December 8) at Mailbox Artspace on Flinders Lane. The show's curated by the super talented artist Danielle Hakim, and it features myself and five other artists from all over Australia, here's the flyer. 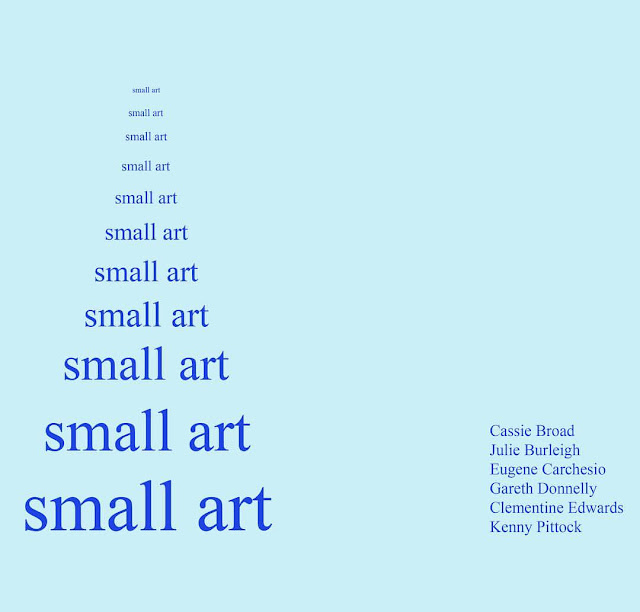 Small Art is on until January 28, for more details on the exhibition click here for a link to the facebook event. Or come along tonight, 6-8pm, for a free drink or two.

My little piece in the show is called Pushing the envelope, here's a little drawing I did to go along with it.
And for a sneak peak of my work that's actually in the show, here's a little snail I'd like you to meet, he's made of ceramic and he's really come out of his shell. (Also pictured is a ceramic teaspoon, which isn't in the show I made that just for fun). 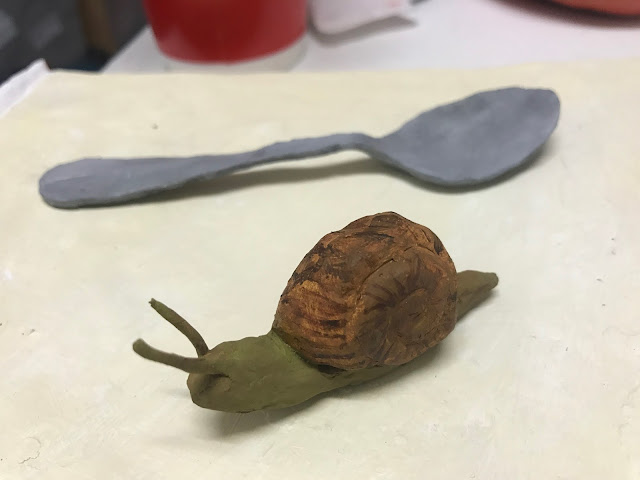 Another thing I wanna mention is that I got some good news the other day; my work in the McGivern Painting Prize, (which is a series of 25 ceramic shopping lists based on lists I found while working at Coles), just received the thousand buck peoples choice award!

Here’s a photo from the opening of me standing by my work with two of my best buds; Chris and Nelson. 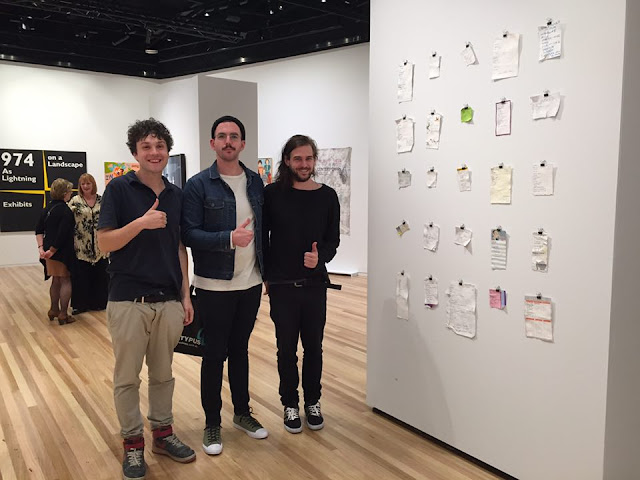 And finally, one last thing to mention today is that if you find yourself on the Upfield train line then be sure to look out the window when you're passing Gowrie station. For the past few weeks, (and continuing until December 15), I've been doing a project as part of the Moreart Festival where each week I put up a new A0 sized drawing in the window of the old ticket box, responding to the site. 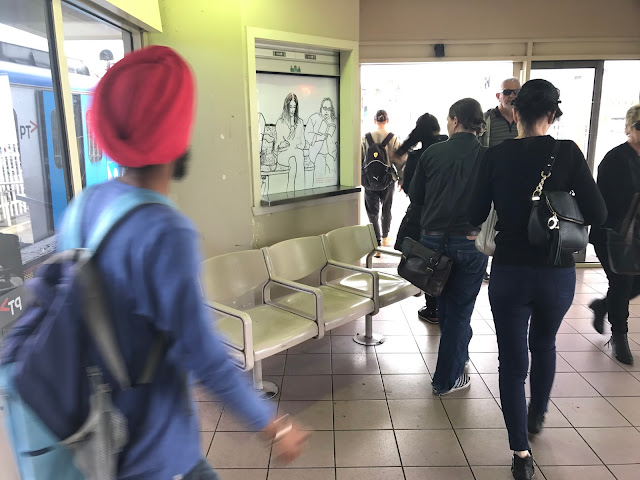 A big thanks to Jane O'Neil, Dan Mitchell and all the fantastic people who helped organise such an awesome event to be a part of. And so yeah, hopefully you can be touched by some art as you touch on your myki.

Also, I didn't actually realise that this festival had awards but amazingly it turned out my work received one of them, not the main one, but still it got something, the Moreart Victrack Award, which is really cool.

Thanks heaps for reading, hope you're going really good, hope to see you soon, and in the meantime if ever you need a little break from anything and everything then turn up this song, close your eyes and fly somewhere special.

All the best, or should I say, all the nest, Kenny. 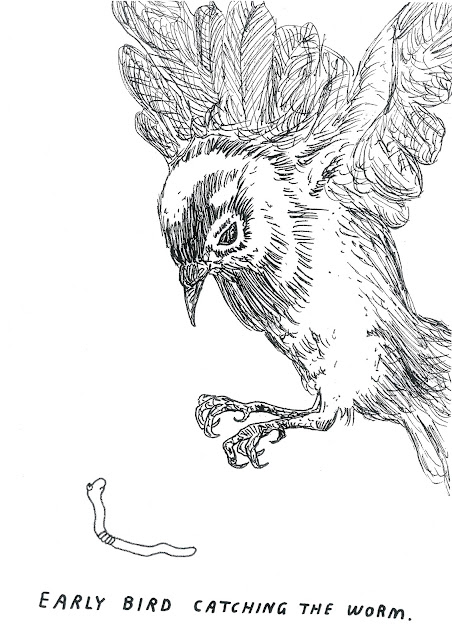 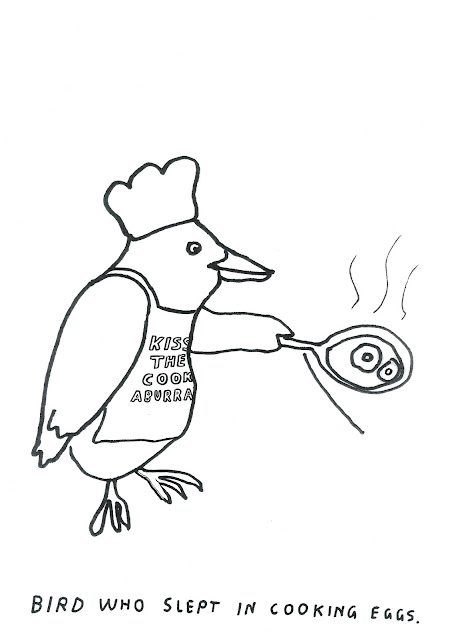