PICA on someone your own size

Hey pal, good to see ya, you're looking great. Pardon? Oh, I've got some paint in my hair?... Is it out now? Cool, thanks. Yeah this past week I've been painting. Getting a little cash money for it too. It looks like my first class honours painting degree is finally paying off. Ha, well, sort of.

Back in December I mentioned that I was invited to paint my LOOK WHAT I'VE BEEN REDUCED TO! onto the shopfront window of the store Third Drawer Down in Prahran, (here it is again). 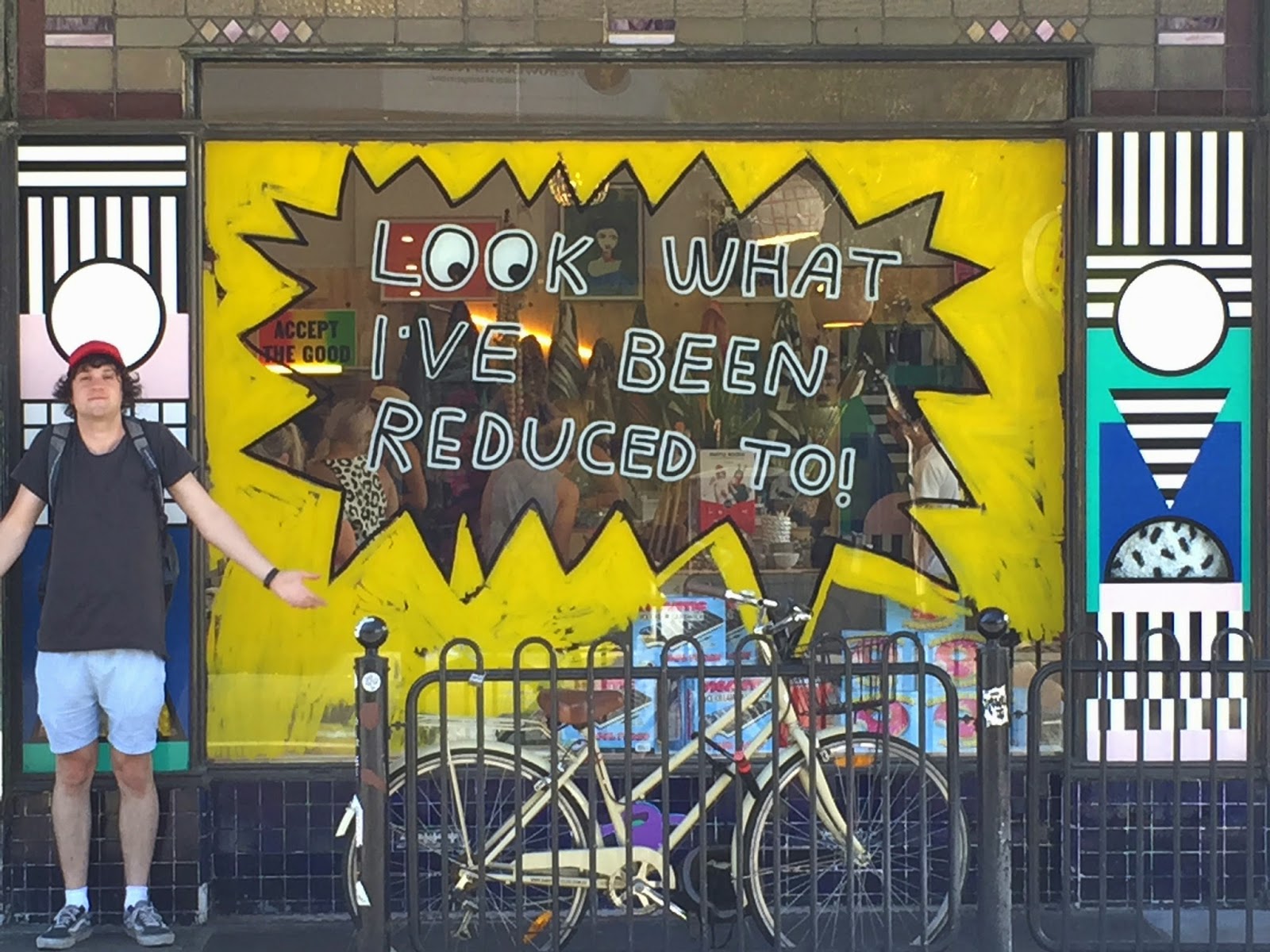 Well while I was doing that an elderly woman approached me and asked if I would paint her living room. "I don't mean like a mural" she said, "but I see you have good brush control and I want to hire you. We've bought all the paint but my husband is getting a bit old to be doing it himself".

I looked in my diary at the dates the woman wanted me to do the painting and the only thing I had on that week was "Take Chloe to puppy training class", so given that my schedule was so dog-gone spacious I told the woman that I'm the perfect man for the job and now look what I've been reduced to; I painted her living room pink, her bathroom white and I varnished her decking.

Here's a painting of me painting. 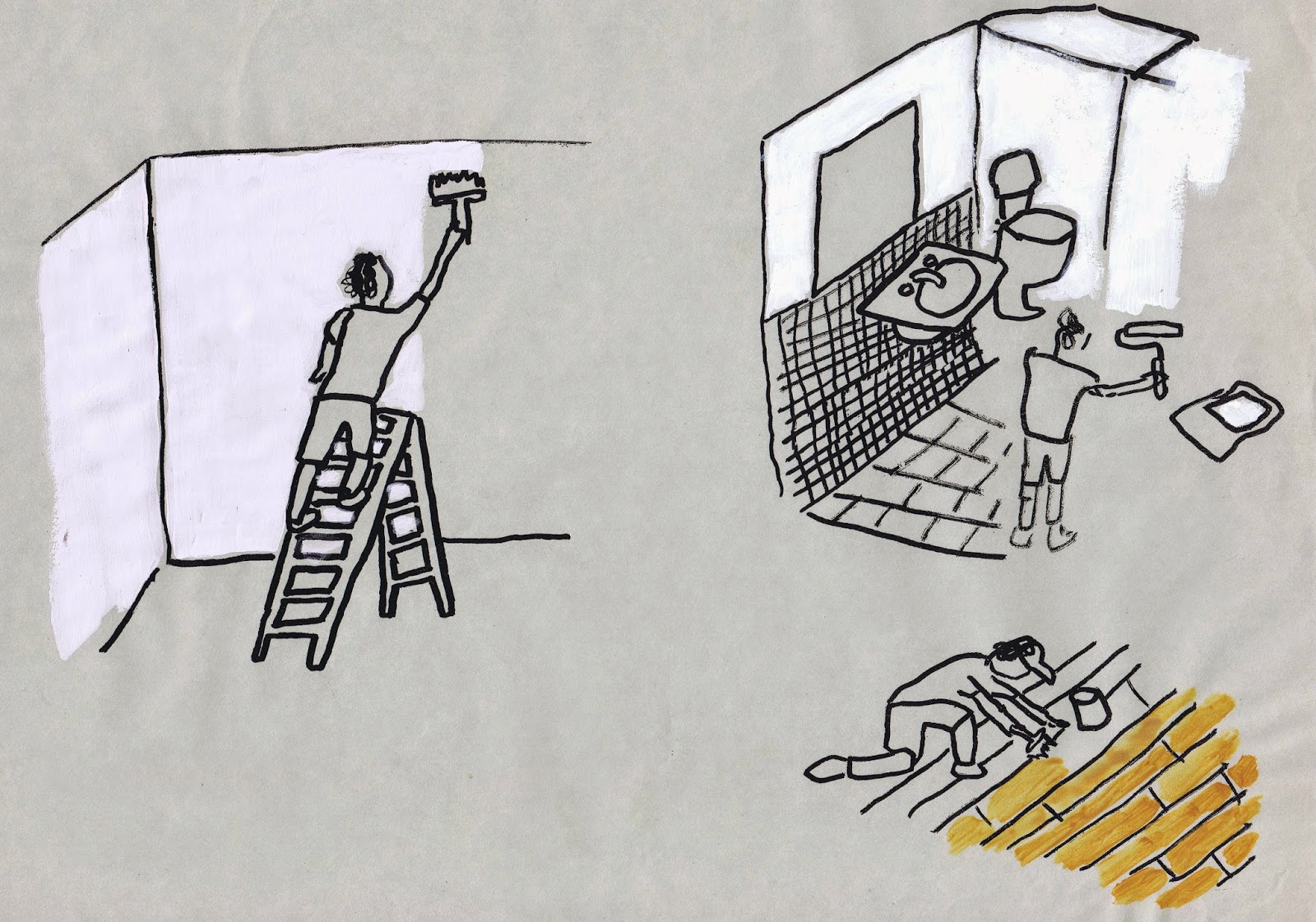 So now when I meet someone and they ask "what do you do?" and I say "uh, I'm a painter" and they assume I mean house painter, which sounds a lot more grown up than saying "I'm an artist" so sometimes I just don't correct them, well now I'm actually telling the truth.

But ok, speaking of painting houses I should actually do a bit of housekeeping on this blog and quickly remind you once again that issue 3 of Sturgeon, the rad publication put out by Artbank that features a new text and image work by me called 'Total Eclipse of the Art', is still available in all your favourite newsagents and gallery gift shops. Here's a photo I took while reading it and filling my car up with gas. 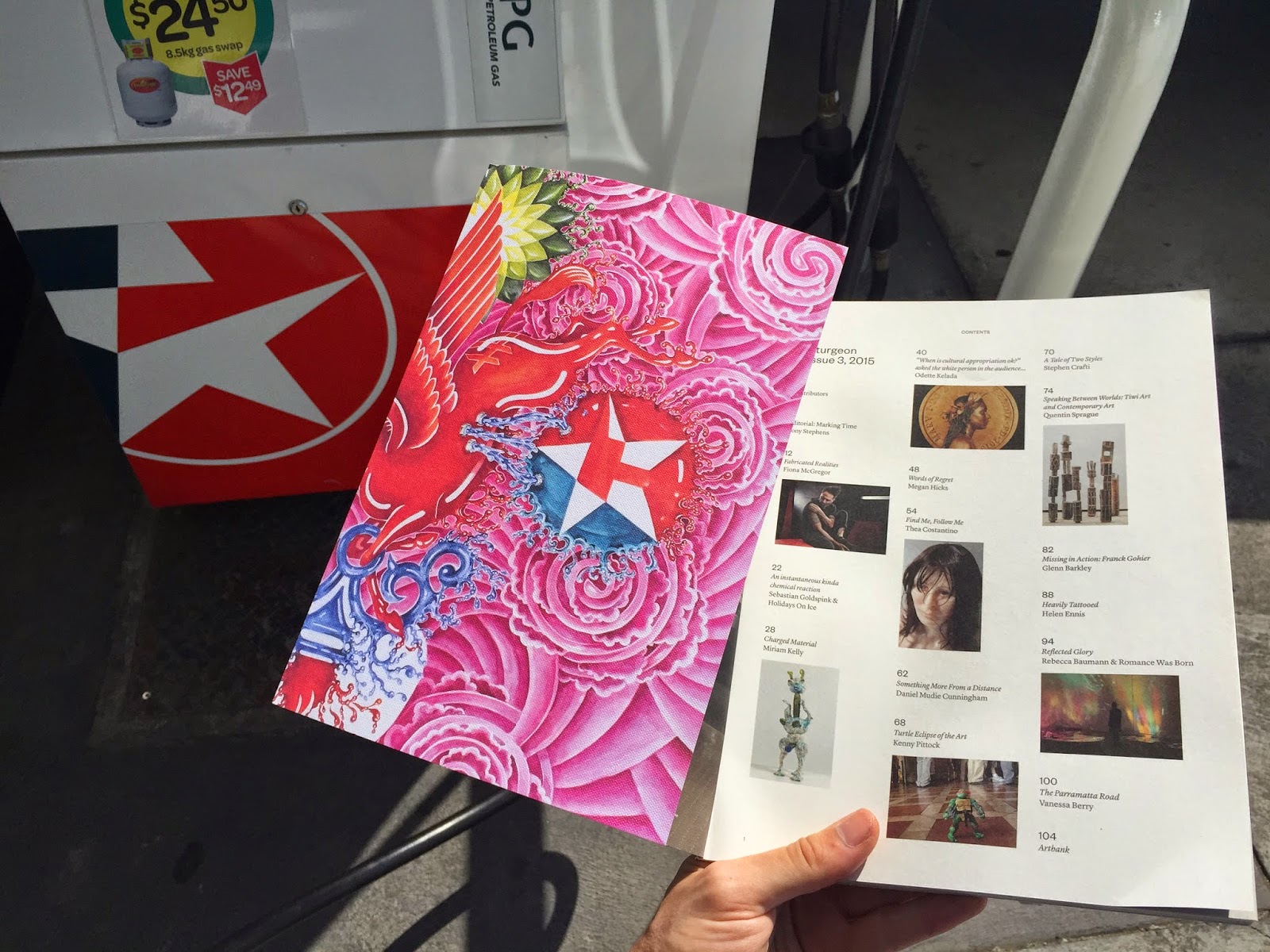 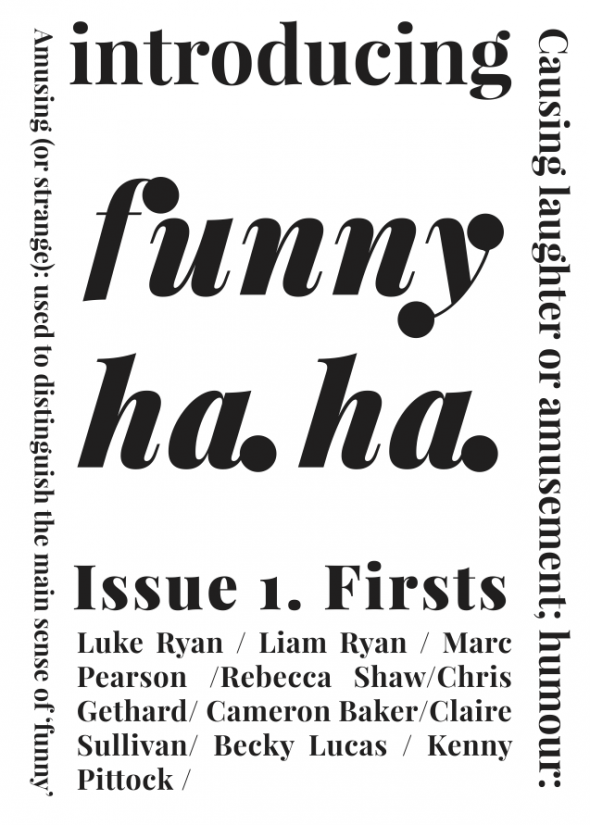 It's a real thrill for me to see my name on the poster as the other names on it are mostly all comedians, writers and actors. In particular Rebecca Shaw is one of my favourite short form writers at the moment, Becky Lucas is a really funny comedian from Brisbane and Chris Gethard was an actor in The Office.

Basically for Funny Ha-Ha I was asked by the editor if they could include a selection of photos from my instagram from back when I did my "You art what you eat" project, documenting everything I ate last October. It's funny (ha-ha) to see my photos away from their original context but I think it works, ha, as seen in this friendly review of Funny Ha-ha in The Thousands that simply says "Kenny Pittock's take on food photography is worth trying to get your head around."

Here I am trying to get my head around it while holding the publication and chilling with the wonderful Bec Varcoe, creator of Funny Ha-Ha. 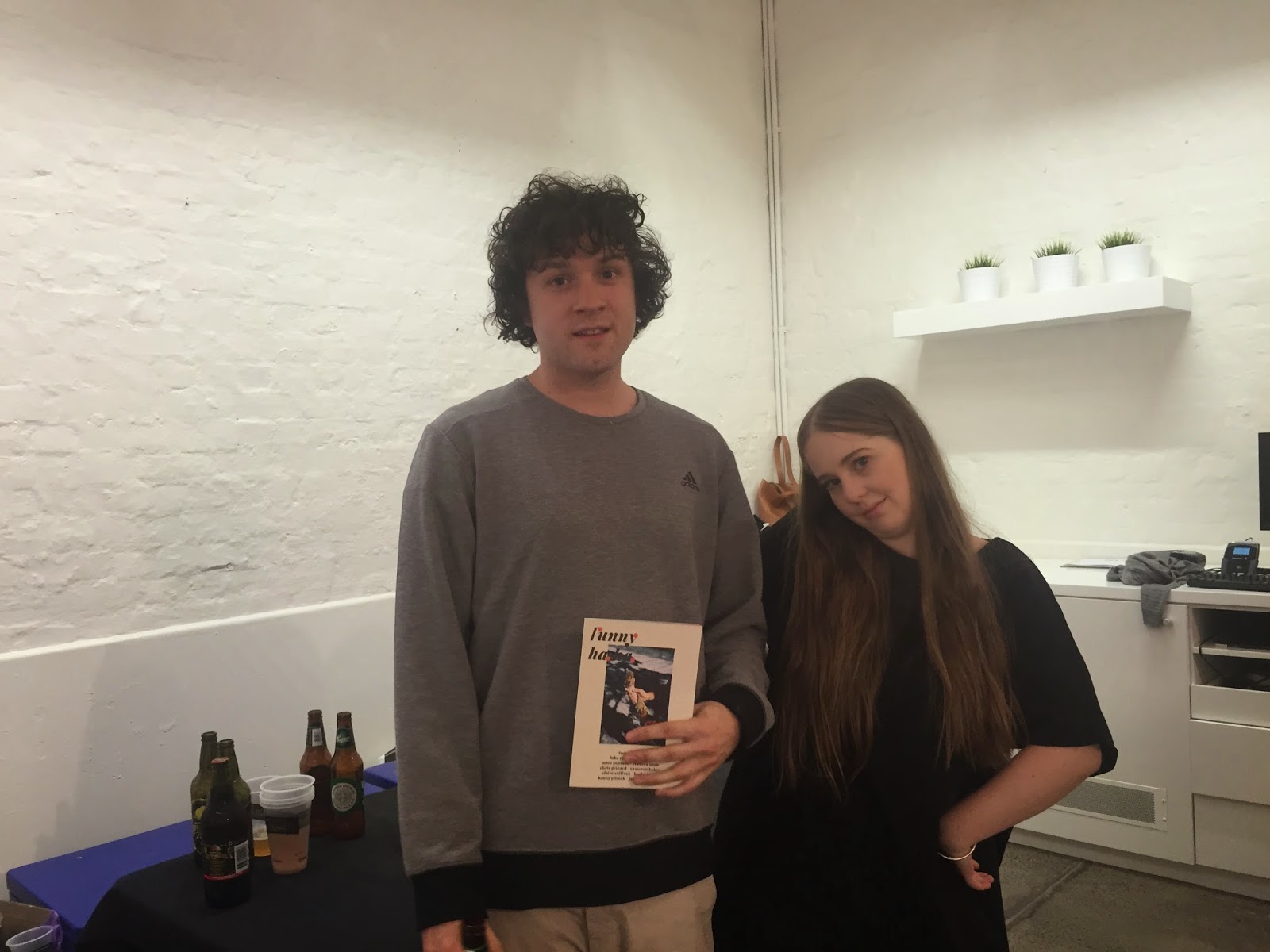 And here we are again, (but this time Bec's being blocked out by a sculpture). 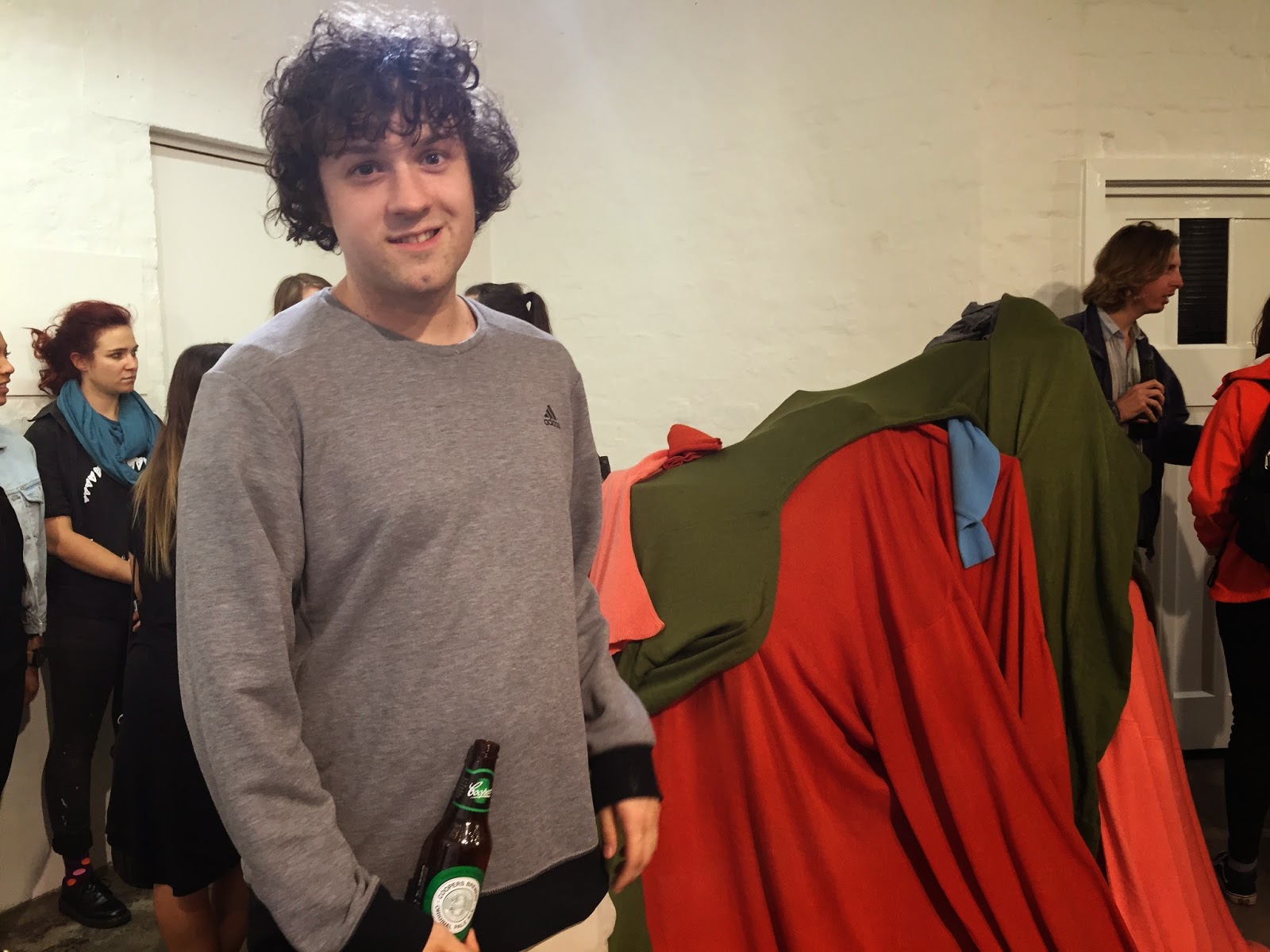 And here's some photos of my pages in Funny Ha-Ha taken at the book launch. 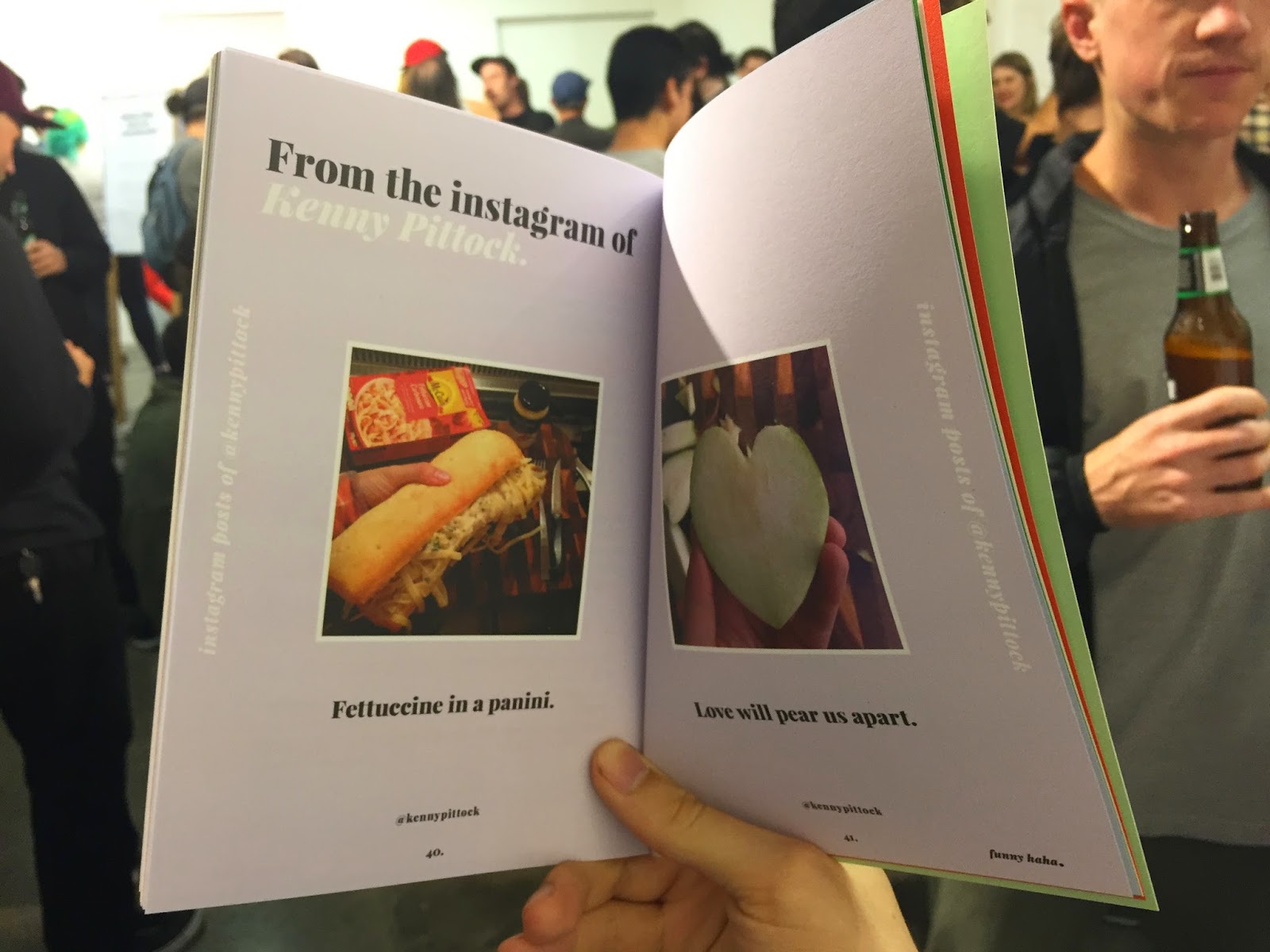 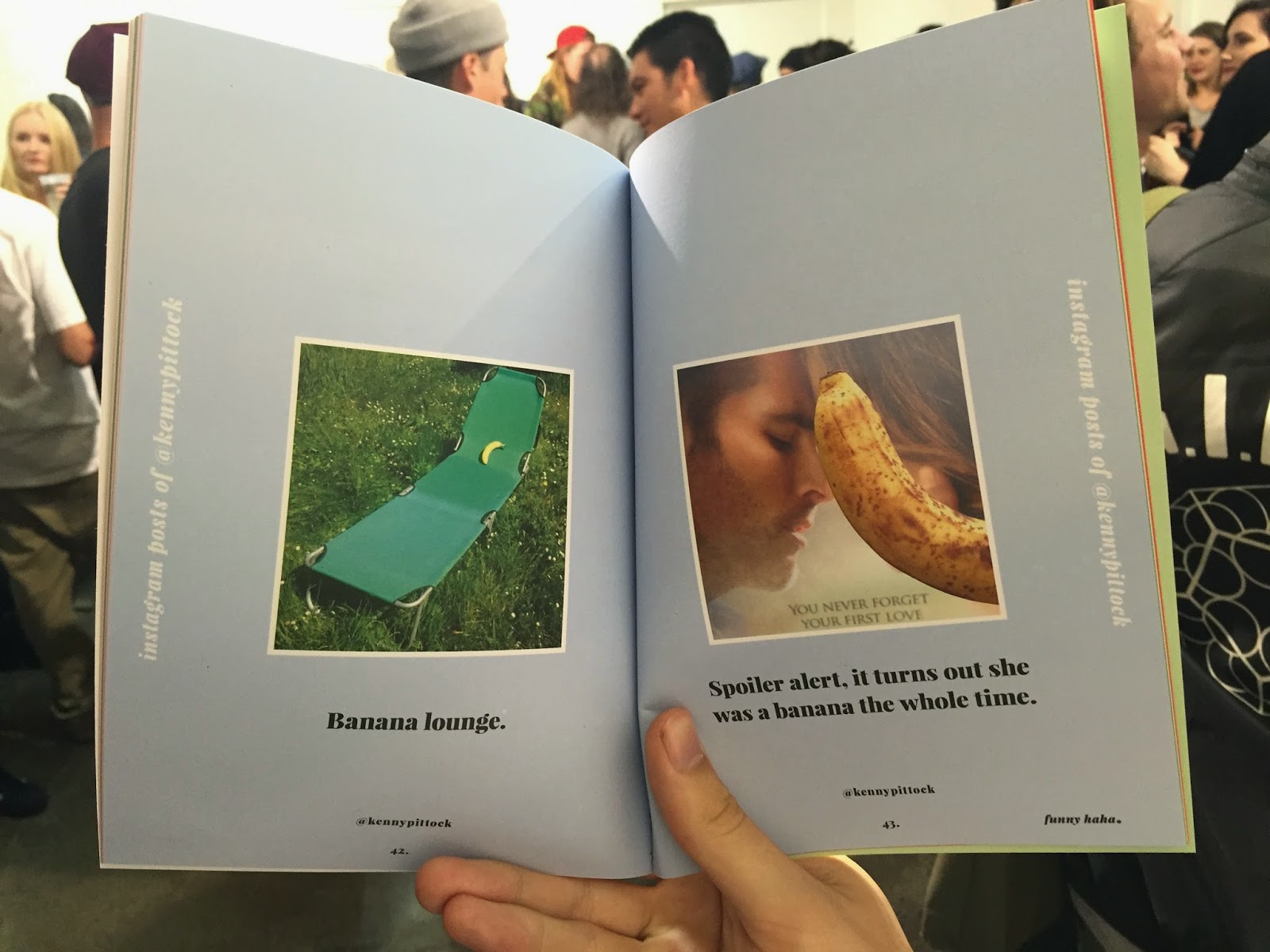 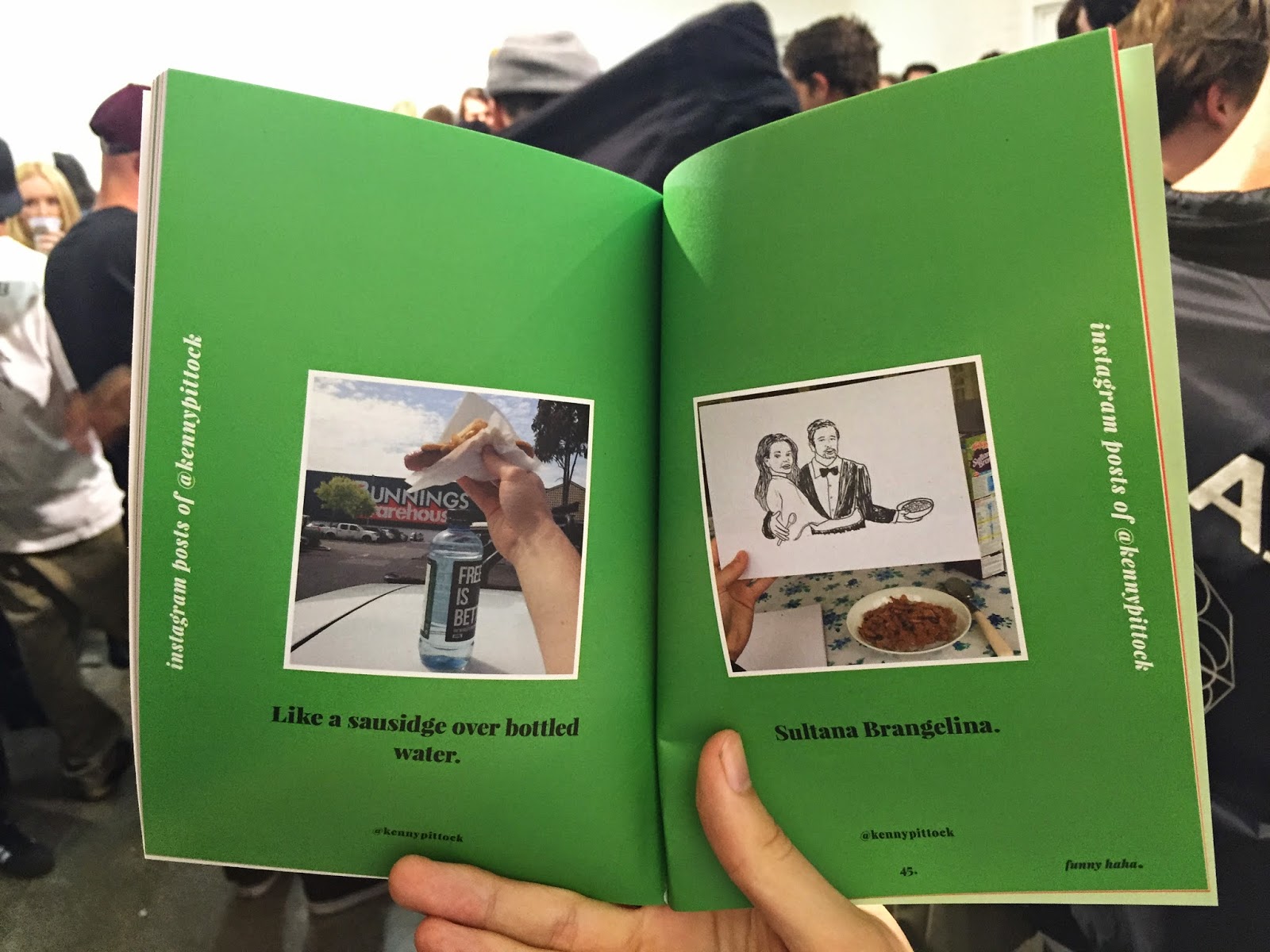 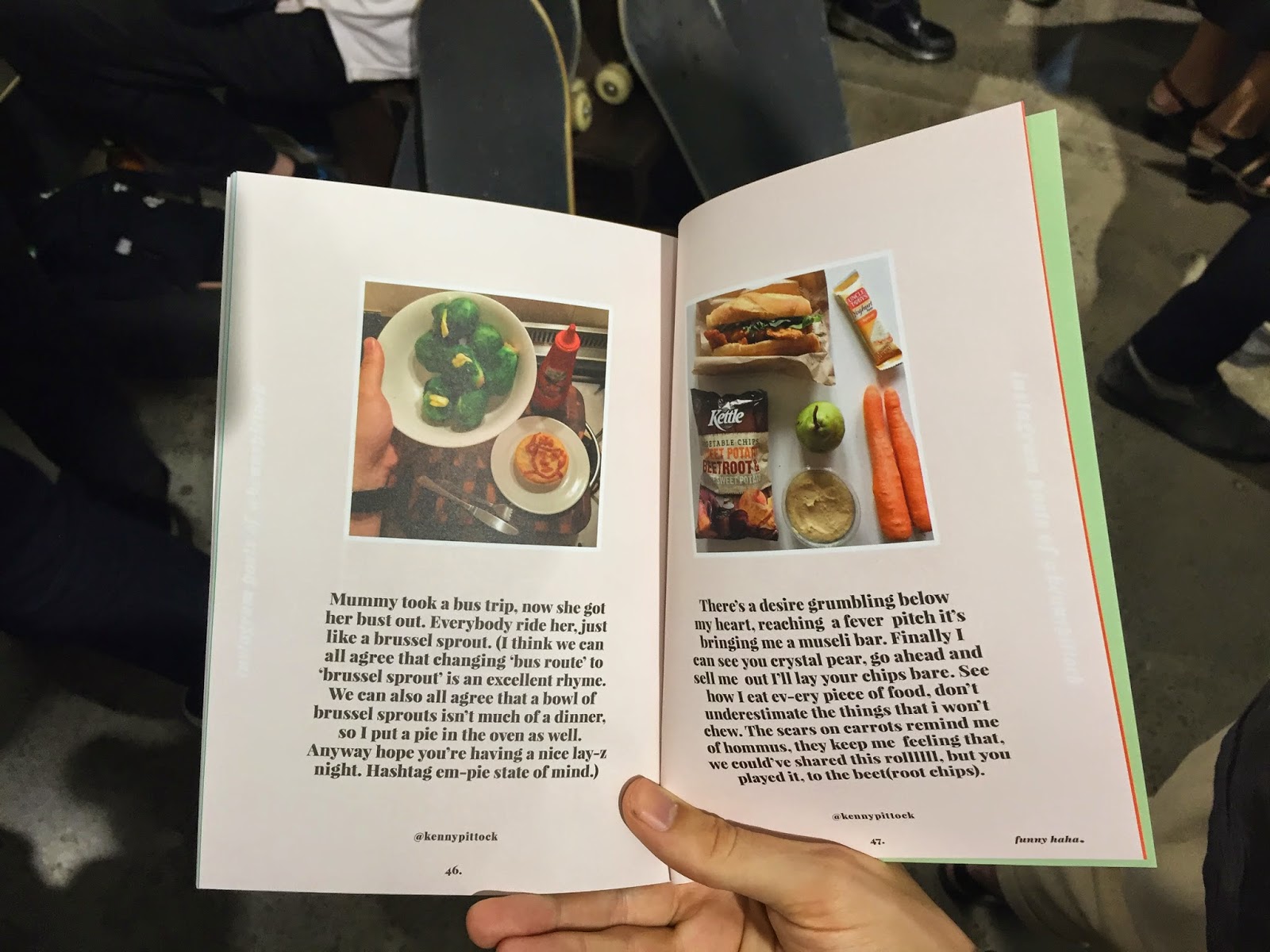 
Oh also, while I'm doing housekeeping, a few months ago a person named Lily wrote me a nice letter and included a "supposed to be ironic" photo that she wanted me to do a quick drawing of. I did the drawing but unfortunately I think I've lost the address, so Lily if you're reading this write to me again and I'll be sure to post it your way. 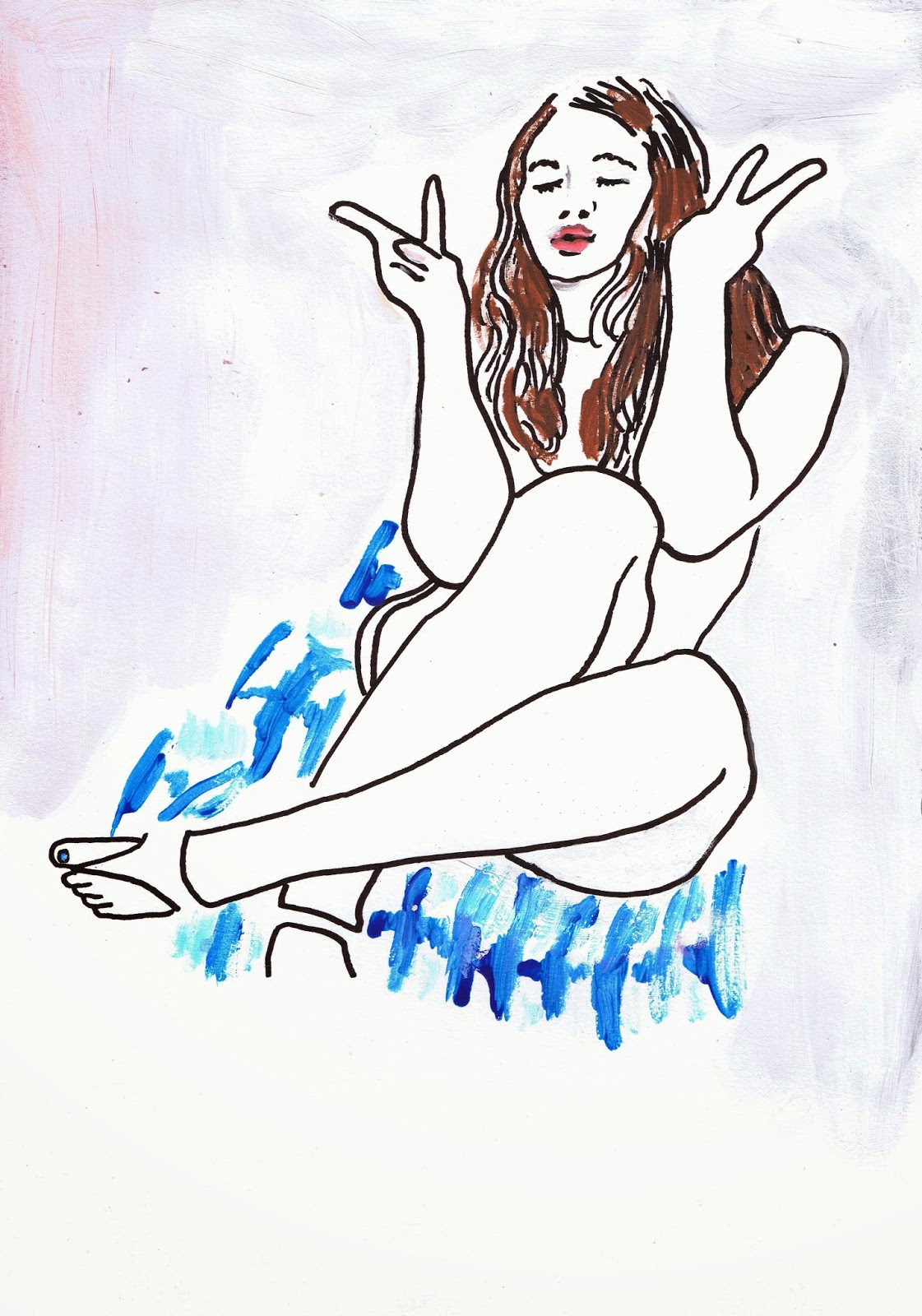 And the last thing I'll talk about today is that there's an interview with me in the latest issue of Colosoul, which is an online publication based in Perth. Click on this sentence to read it, I'm on page 29 and 30.

You can tell the interview was done a little while ago because when I'm asked about any upcoming shows I mention the Art As A Verb exhibition at MUMA, but definitely still check it out if you're interested as I also talk a little bit about childhood as well as the recent Salon exhibition at the Perth Institute of Contemporary Art, awesomely curated by Nadia Johnson. 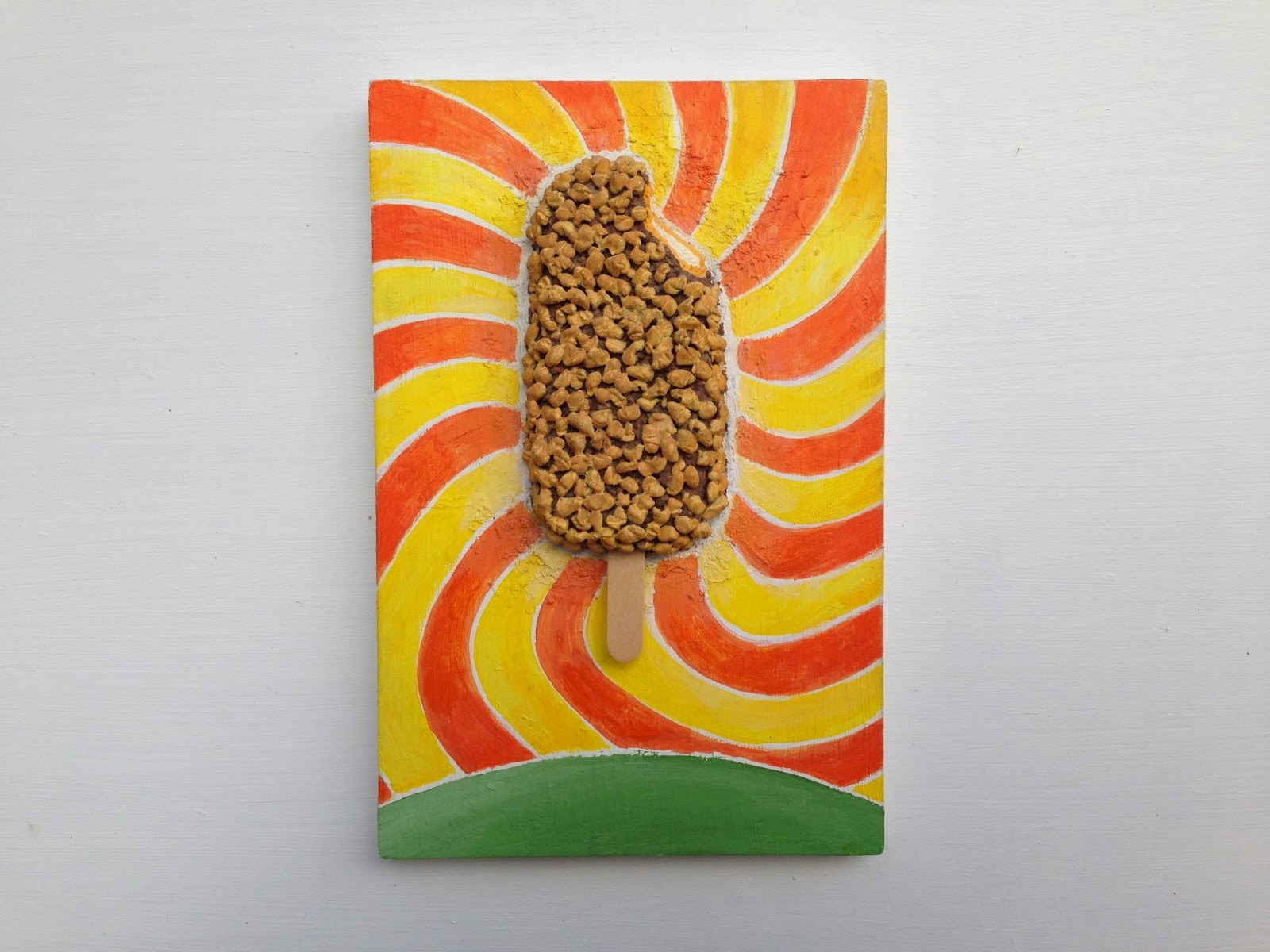 Acrylic and ceramic on board.

Here's a photo from when I installed it onto the front of a train station kiosk, (up the top). 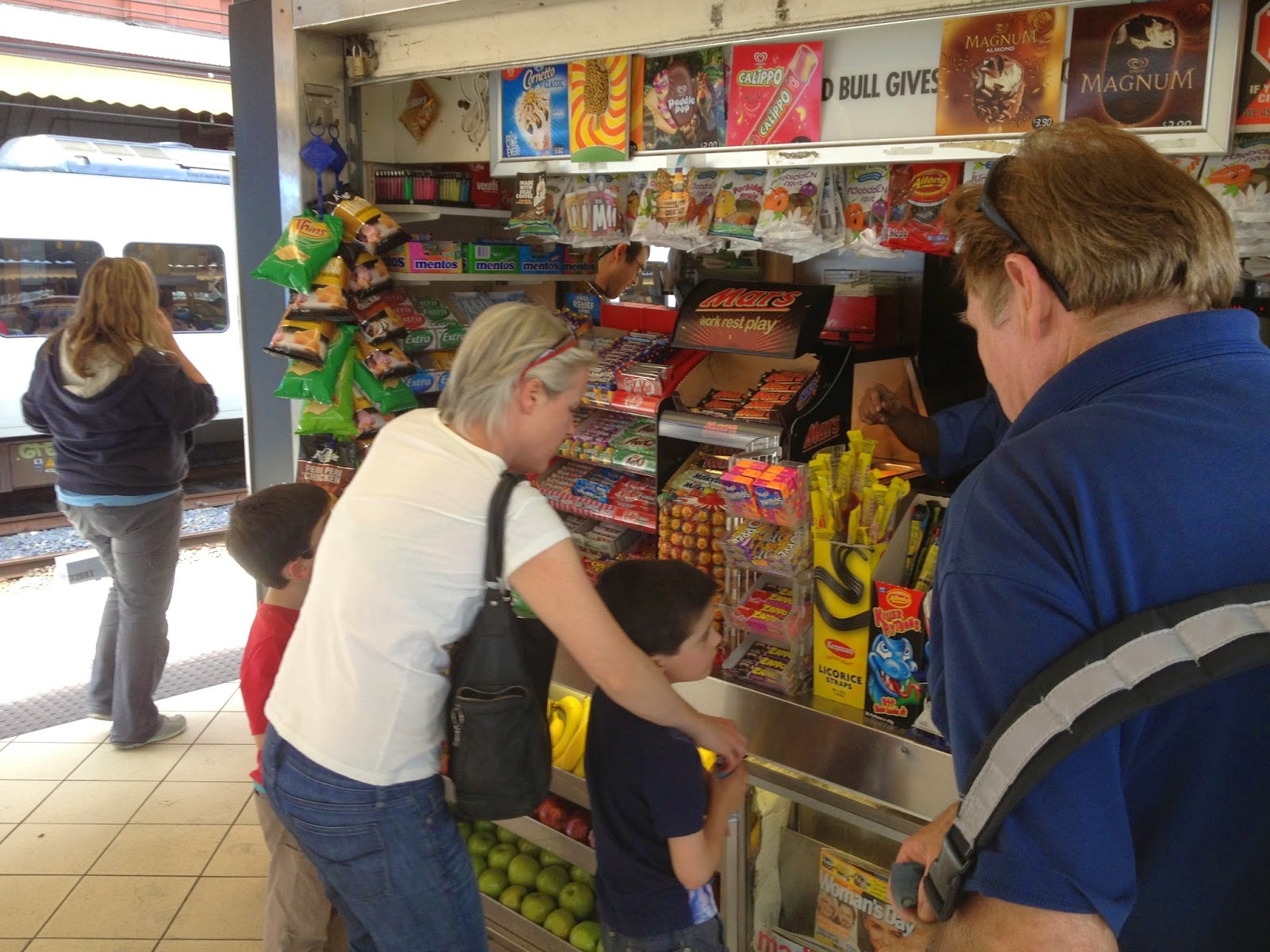 The more developed version of this painting that I made more recently for the PICA Salon measured 152 x 76 x 4cm. 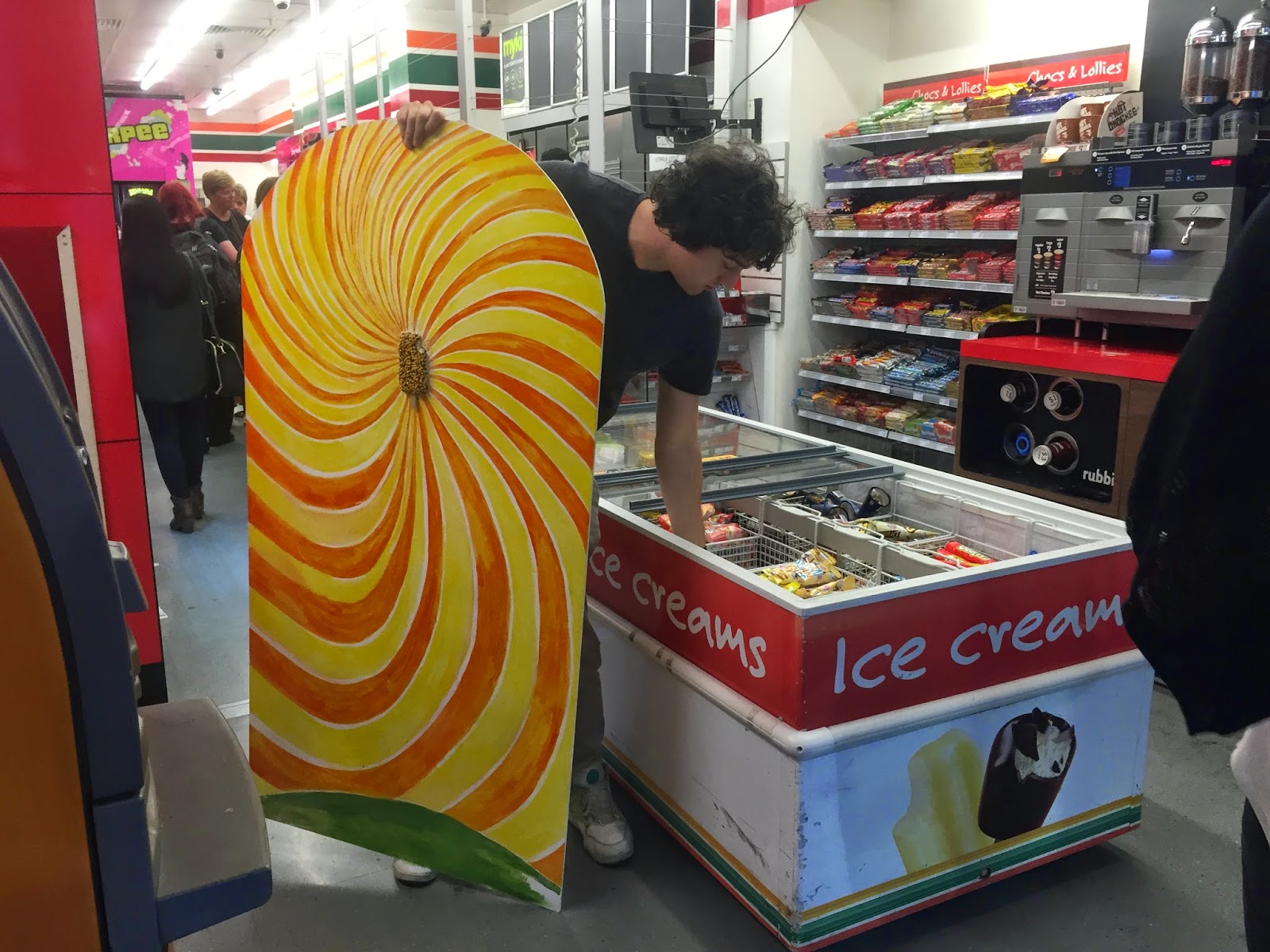 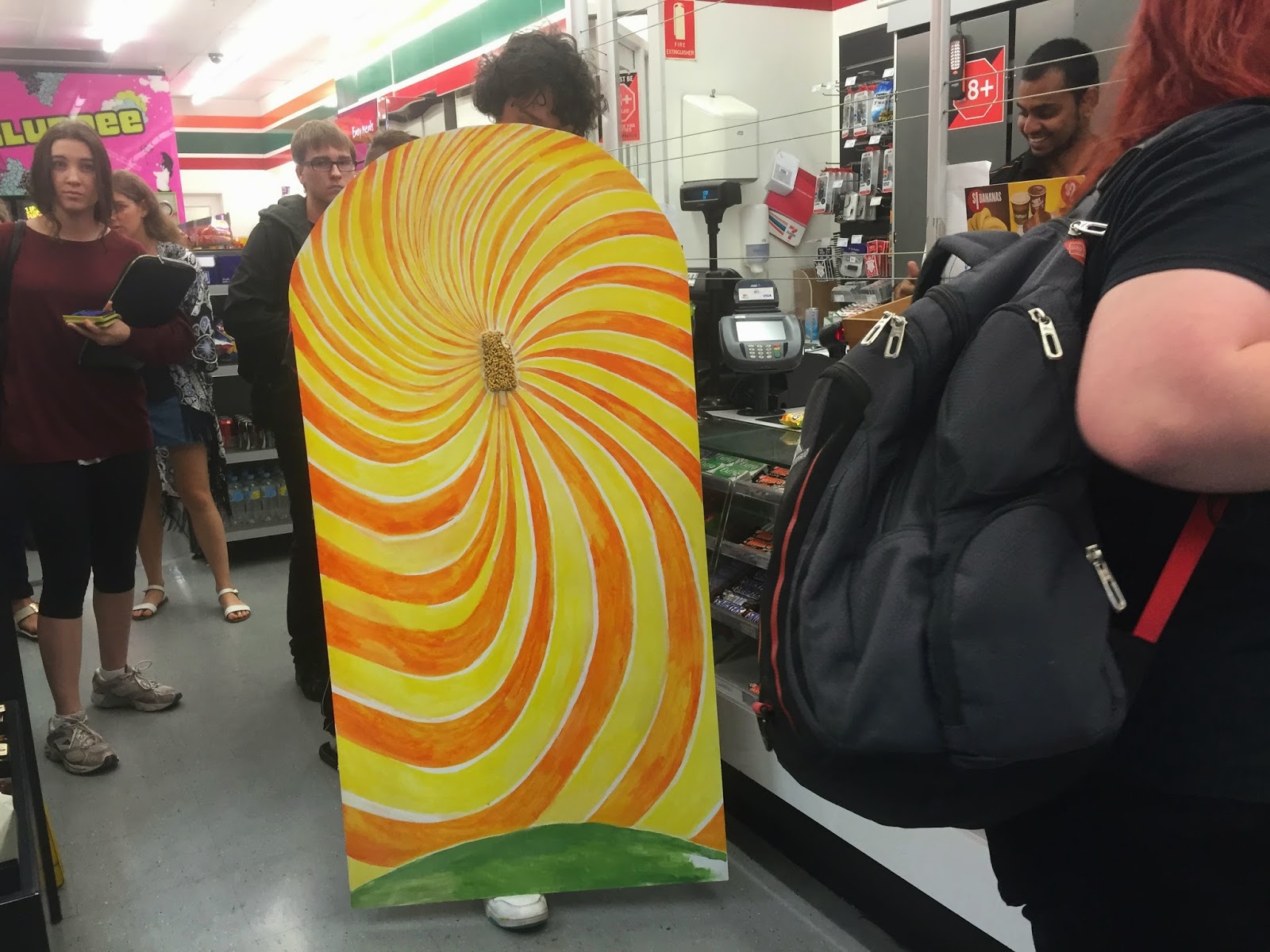 And here's my statement for the painting;

I love Perth, it’s hot and relaxed, which makes it the perthfect conditions for eating ice-cream. Aside from that though, probably the thing I associate most with Perth is mining; a lot of people I grew up with see it as a golden opportunity to go to Perth and work in the mines. The thought of me ever having to do that scares me out of my mined, instead whenever I’m in need of gold I just go to the milkbar.

It’s like what Neil Young is always singing about, “I wanna live, I wanna give, I’ve been a miner for a heart of Golden Gaytime”. 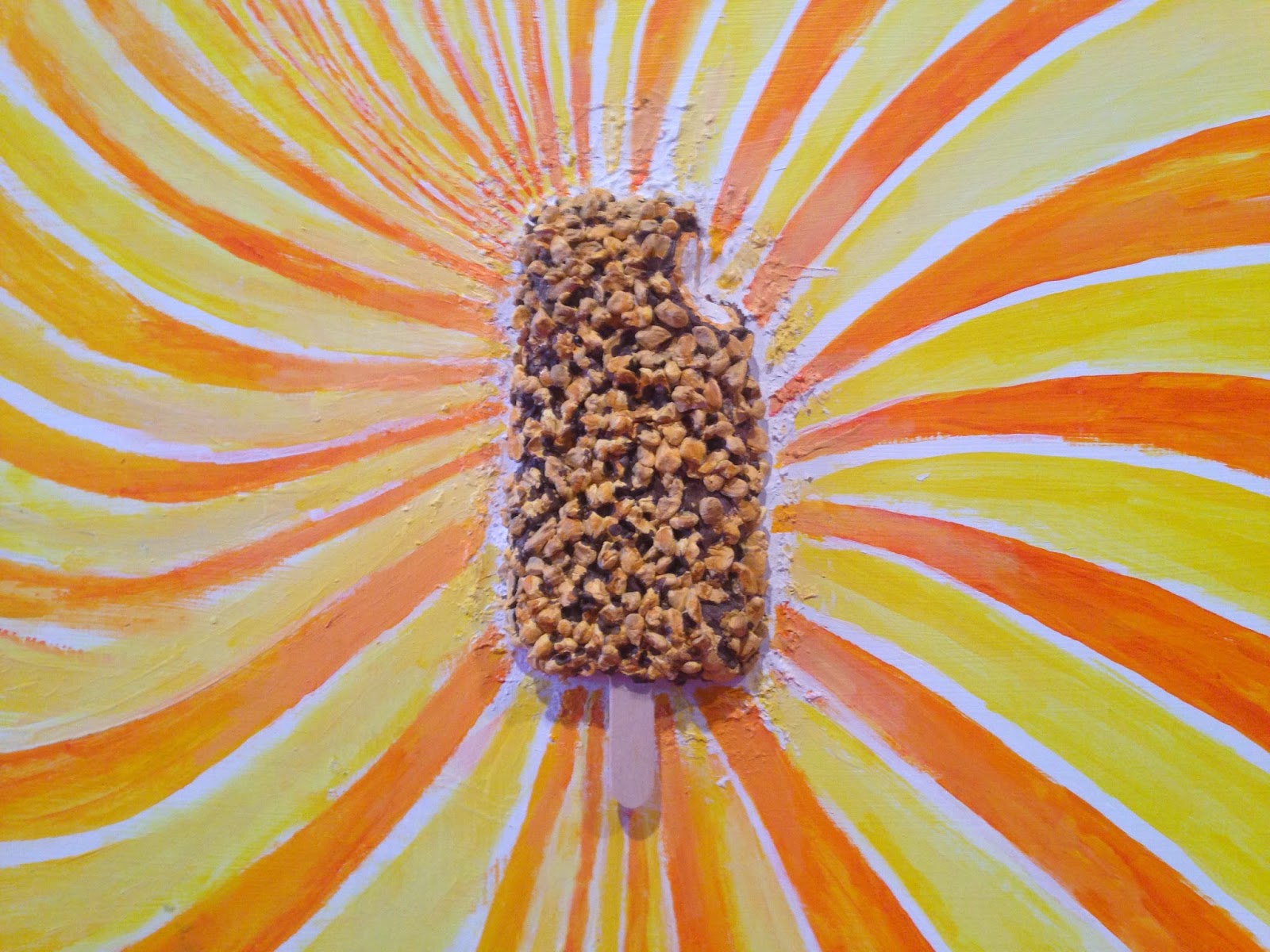 Going through some photos from the PICA Salon opening, here's one of my buddy Abdul Abdullah and I in front of our works that were hung next to each other. 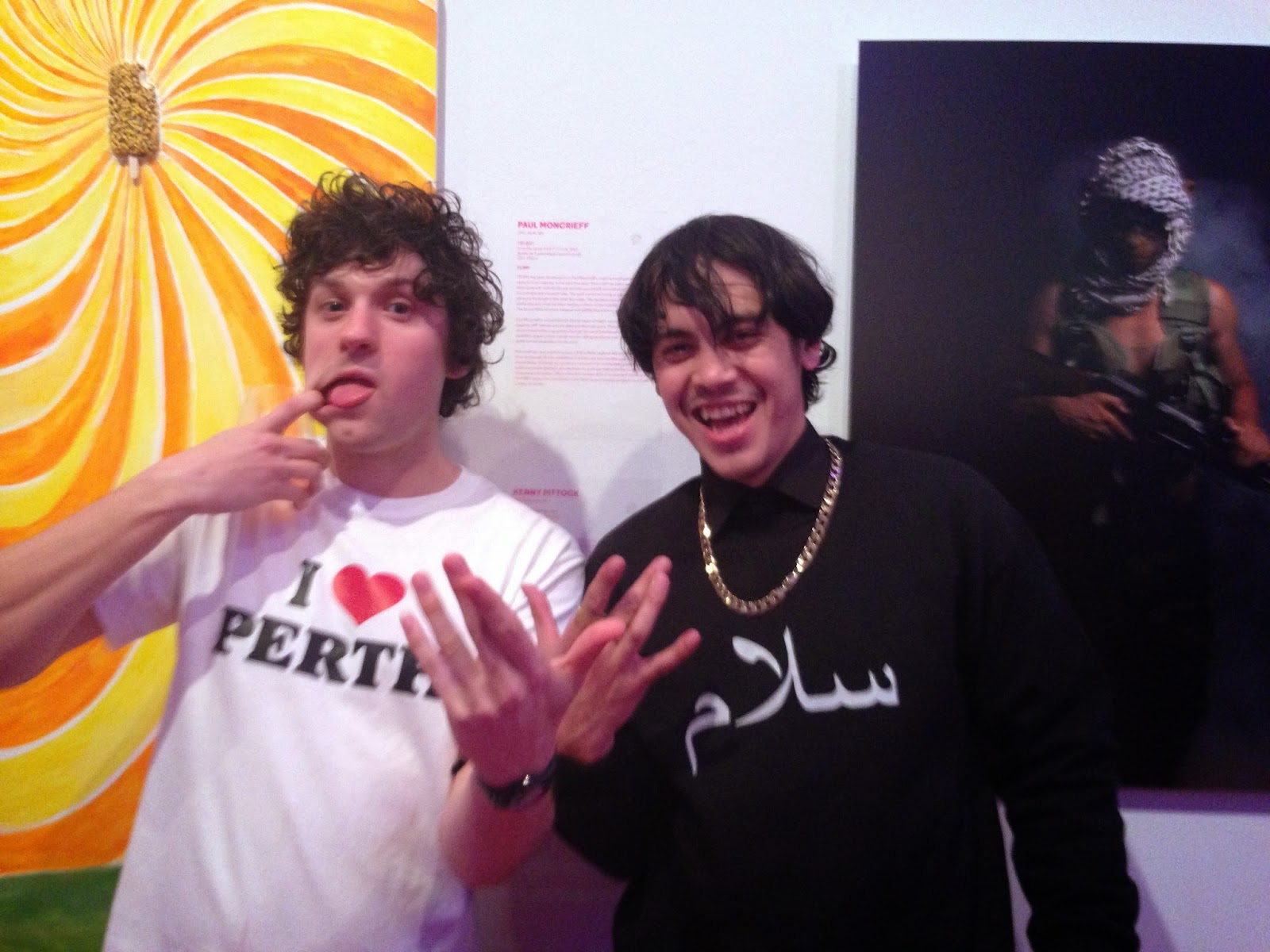 While comparing the differences between our works I said "Abdul, if I'm ever gonna be a big shot important artist like you are then I'm probably gonna have to start making stuff that's more political." and we decided the first step in this direction would be for me to try on his bling. 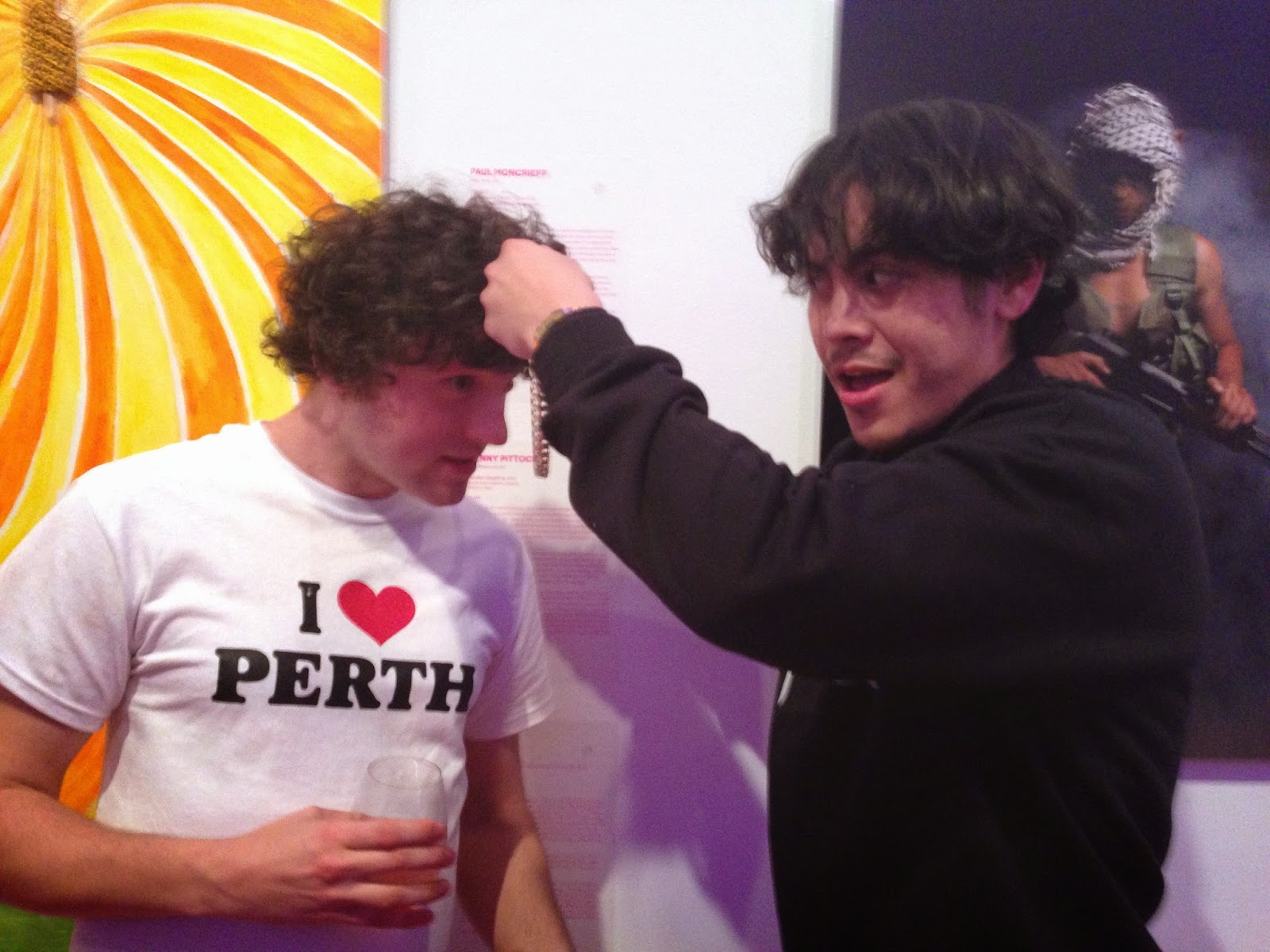 Here's the moment where it got caught on my big nose. 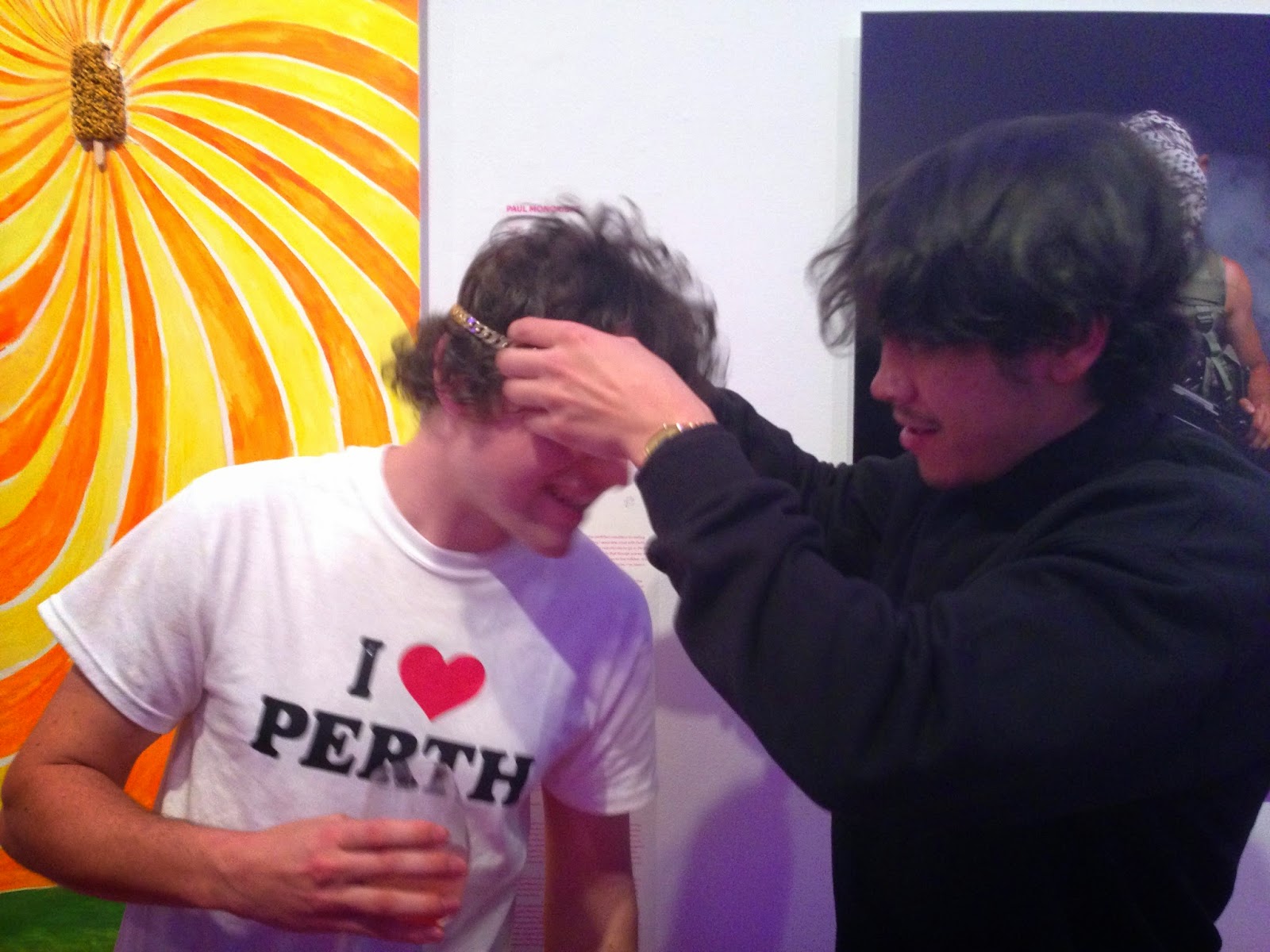 Ha, and here we are looking like a couple of very serious contemporary artists. 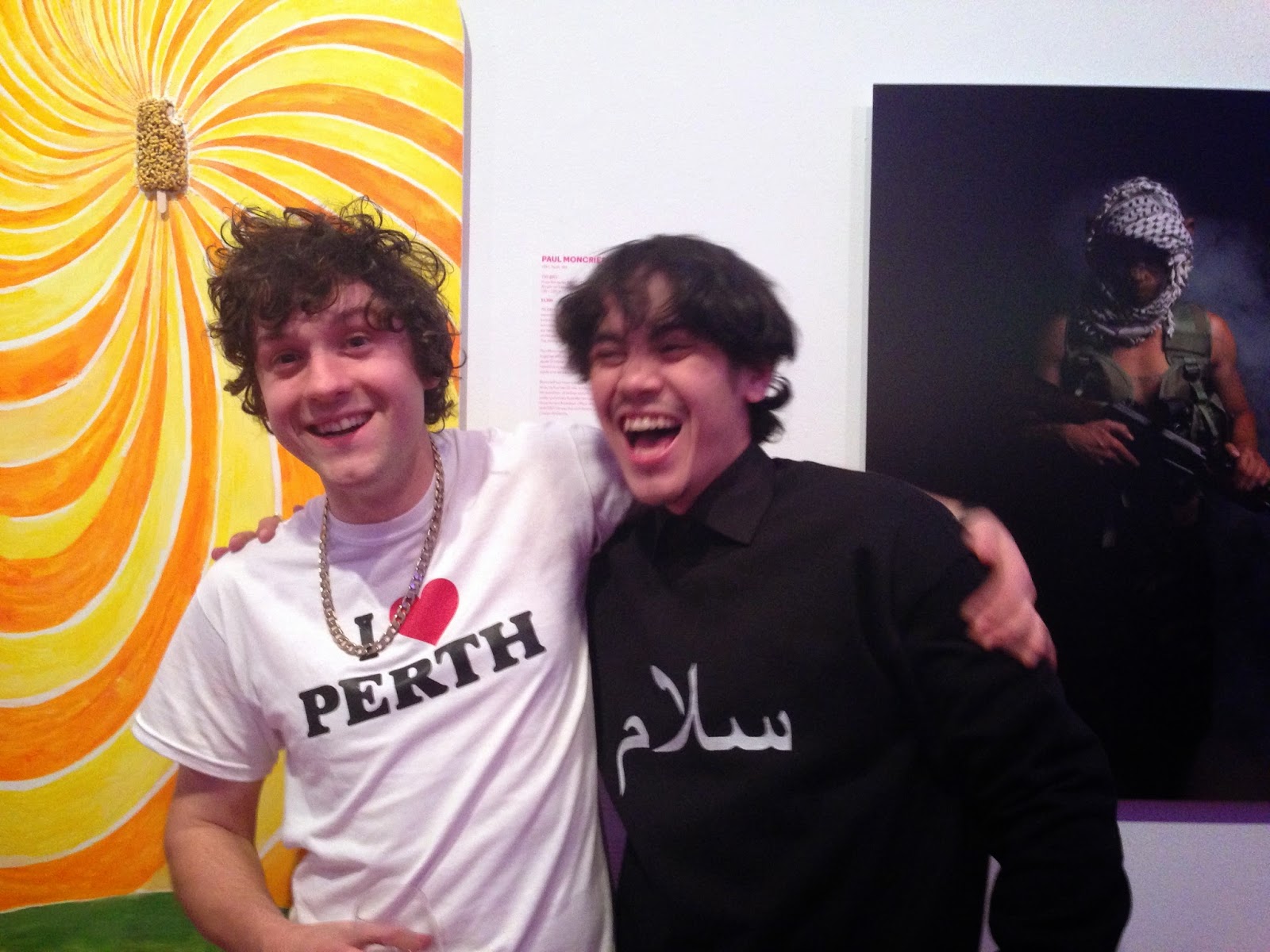 For a bit of extra fun on the opening night the amazing people at PICA also organised, as a companion to my Gaytime painting, a golden body builder to walk around with a golden esky and hand out actual Gaytime ice-creams. 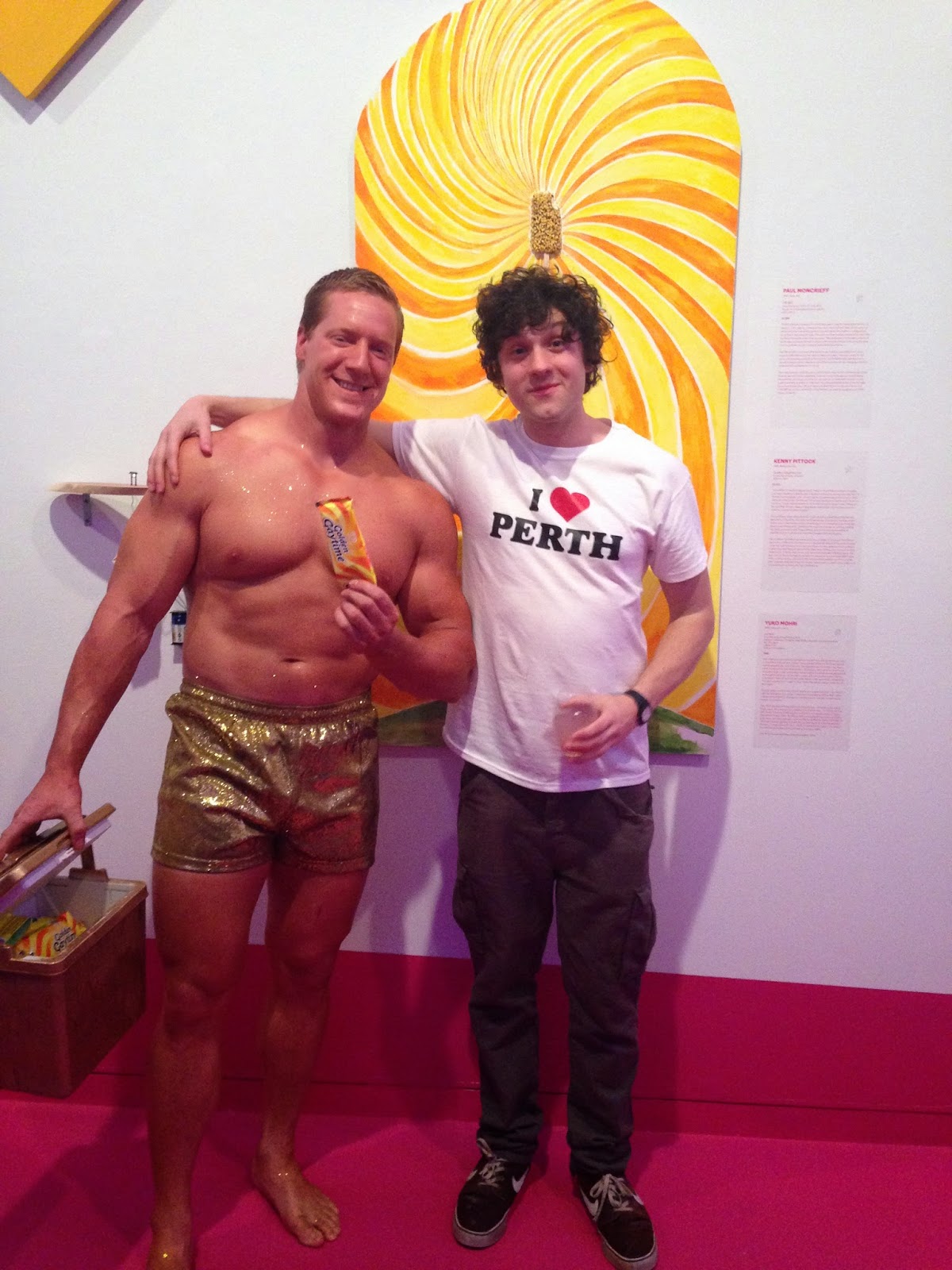 The shoulder of my t-shirt is now permanently golden as a result of that body builder putting his arm around me for a photo, but on the bright side at least now my t-shirt matches my painting. 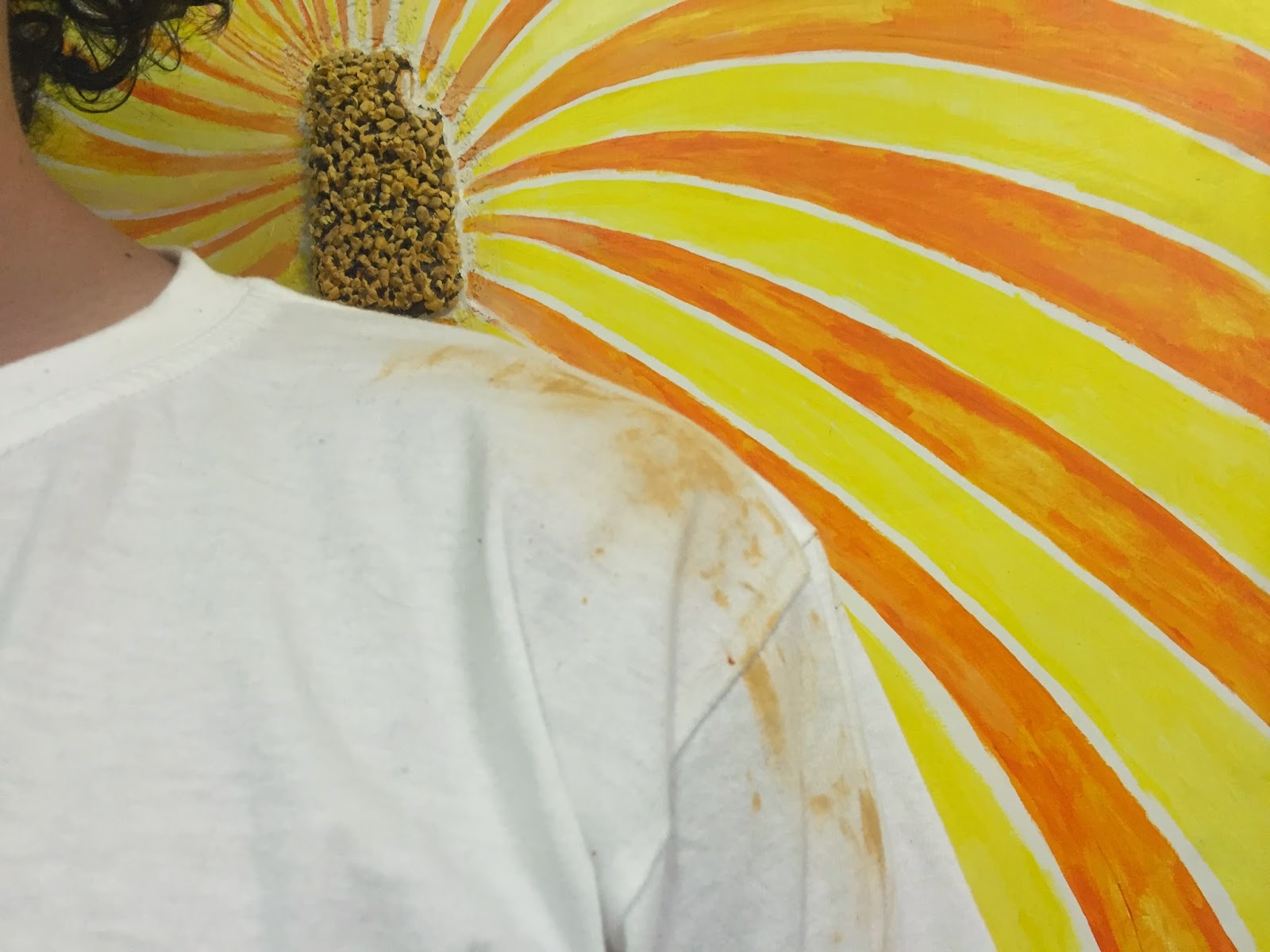 And I know what you're thinking; "Oh no, now that the t-shirt is permanently stained how will you be able to show people that you heart Perth?!" No problemo, I can still wear it, all I gotta do is also wear an open shirt over the top... and sure, now it looks like I heart Erth, not Perth, but that's ok, cause I'm a pretty down to Erth kinda guy. 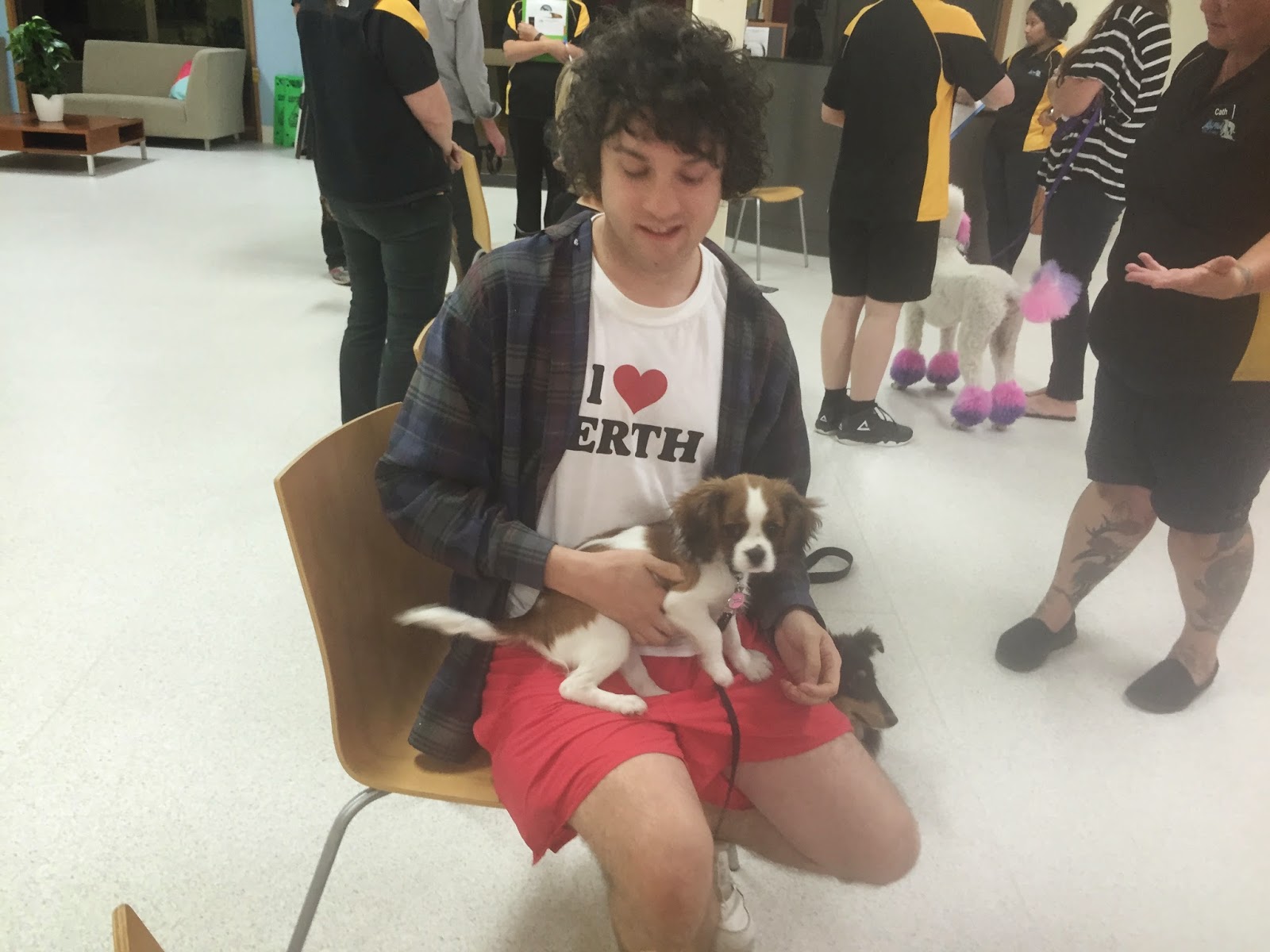 So yeah, here's a piece of insider advice, speaking as someone who once wrote an article for Vogue Living; if you ever rub up against a body builder and need to conceal the stains on the shoulders of your t-shirt, don't freak out, just wear your favourite open shirt over the top and nobody at the puppy pre-school will ever suspect a thing. It'll be our little secret. 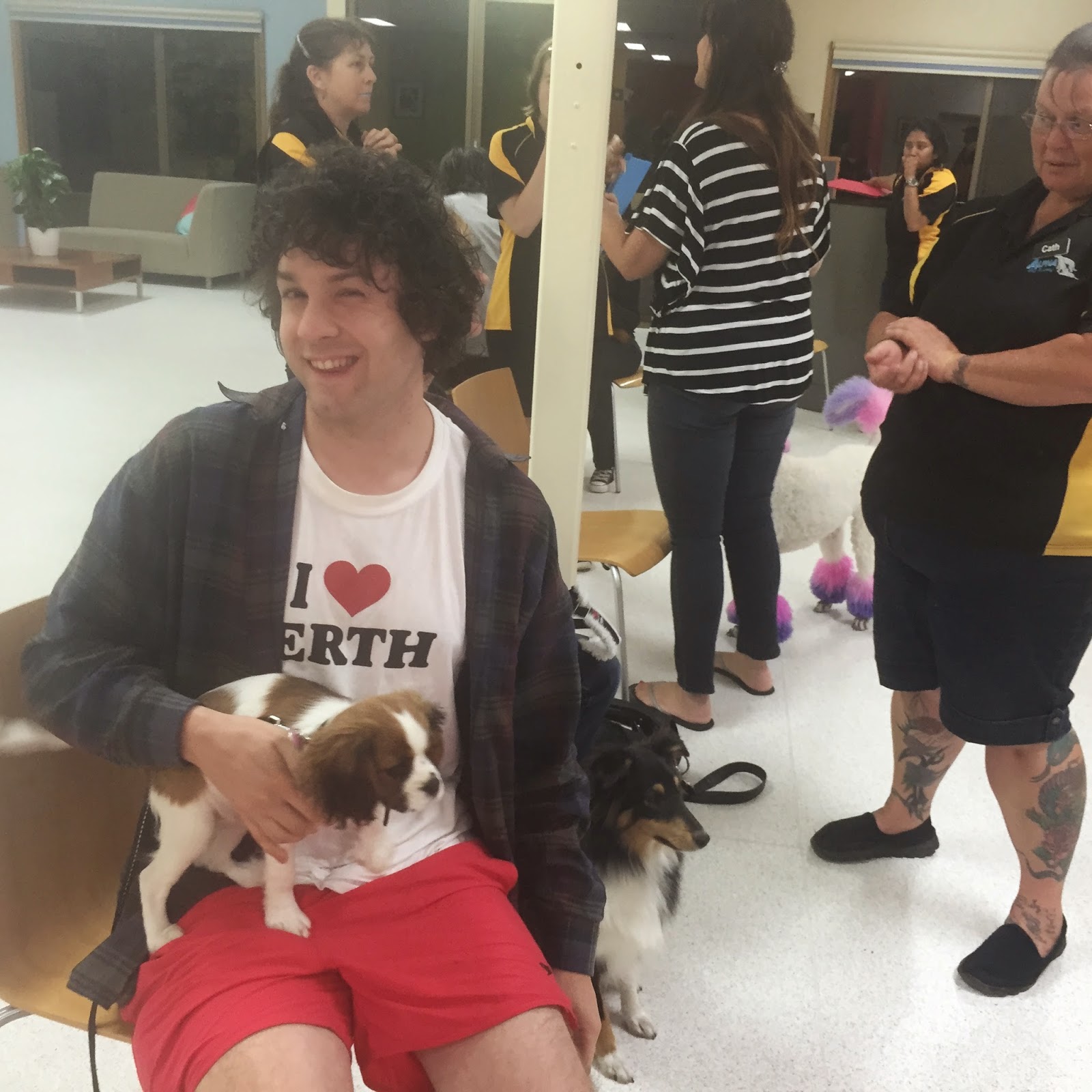 And alright, it's always good to finish a blog post with a hot fashion tip like that so I'd better end this here, besides, we painters have to get up in the morning. But yeah, thanks so much for reading, I hope you have an eggcellent long weekend and to finish this thing off here's a little painting I did that expresses my love for the Perth Institute of Contemporary Art, it's called PICA-langelo's David. 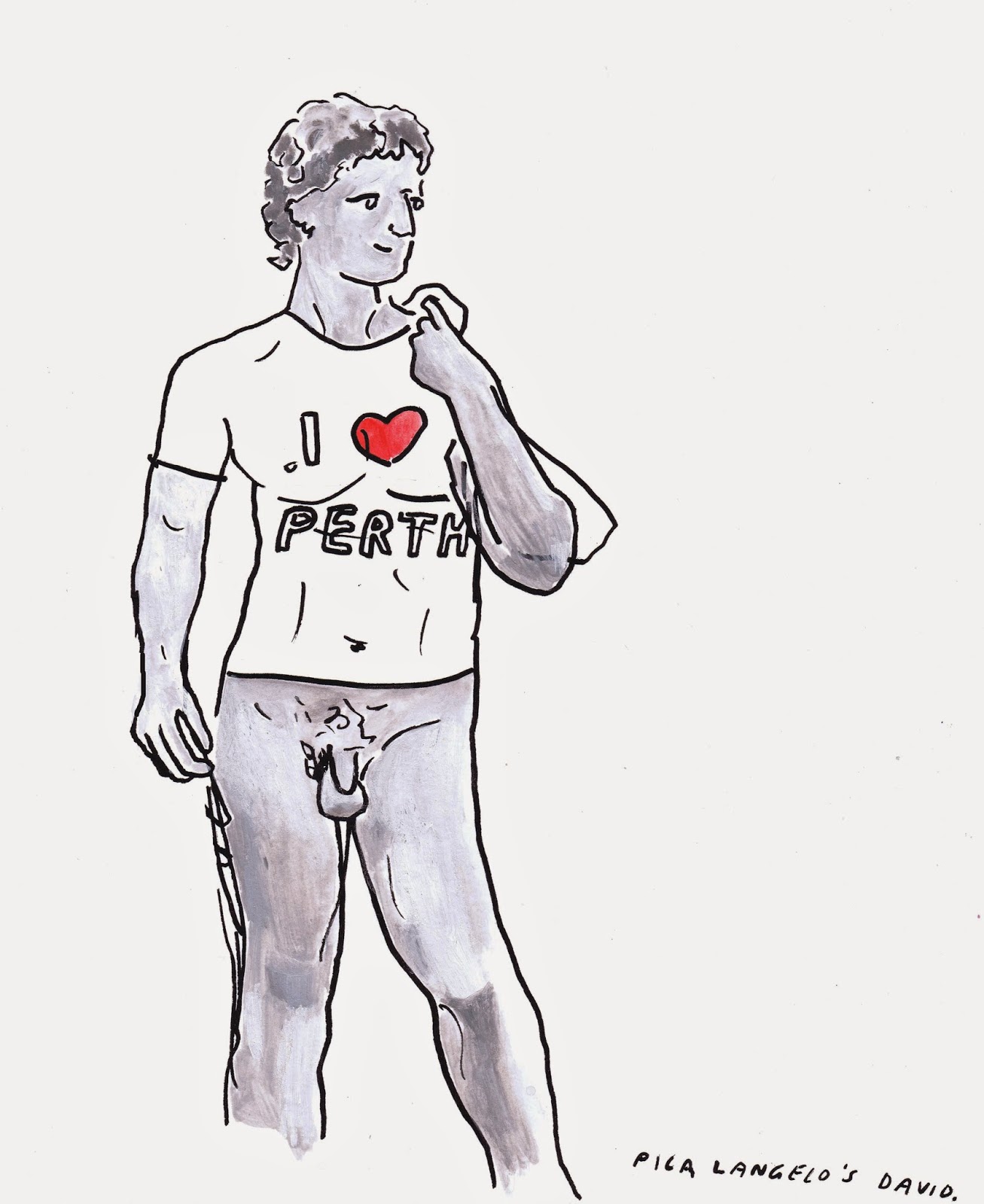