Political Artist (Part Two). Or; Why the long face?

So hey, as of about ten days ago Prime Minister Kevin Rudd introduced a new policy where Australia will now turn away all asylum seekers.

Obviously if you want to know more about the issue then this blog is not the place to start. I don't know anything. Although that isn't to say I haven't been trying to understand, I've been reading a lot.

As well as reading I went along to a massive protest against Rudd's new policy held last Saturday at the Melbourne State Library. 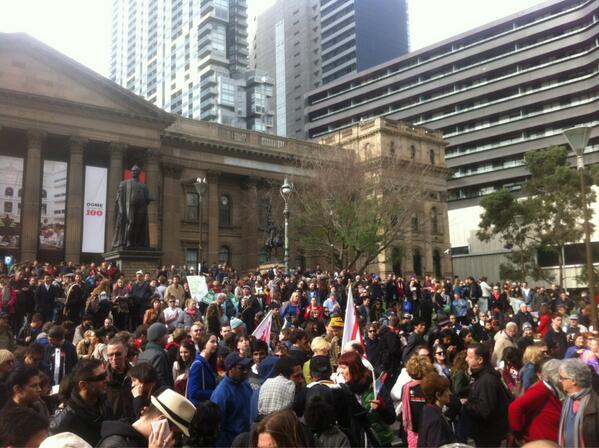 At the protest not only did I support the freedom of asylum seekers, but also I drew a horse. 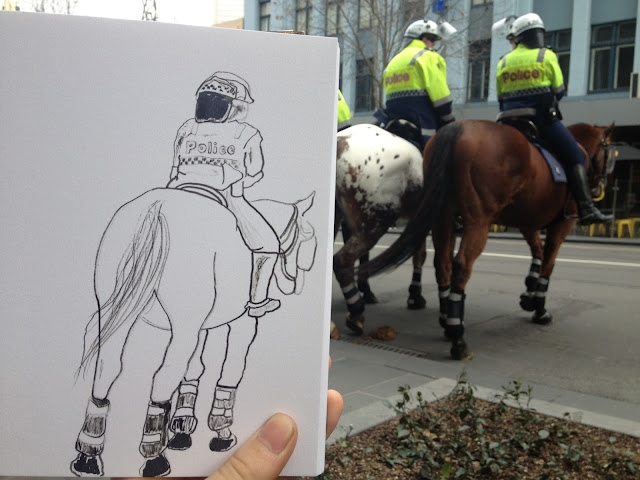 While I was doing the drawing a policewoman came up behind me. "Oh hey" I said, "I'm just doing a little drawing".

"Yeah I know" she said warmly, "I was watching when you started and was just coming back to see how it's going".

She then told me that the horse I'd just drawn is 14 years old.

She then told me that if she wasn't working she might've actually come along to join in the protest. 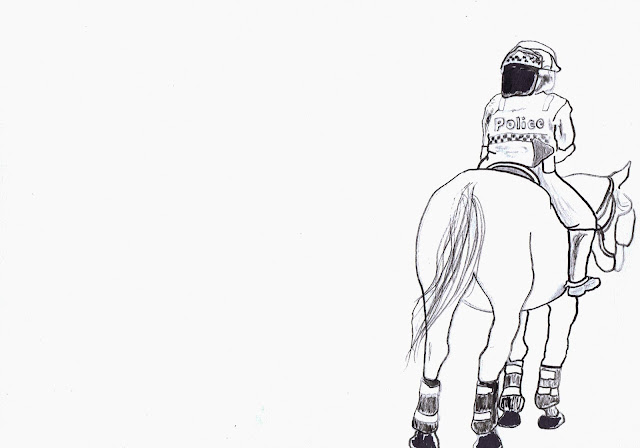 I think what I find most funny, or interesting, or something, is that despite how urgent this seems to be the media still treats it with no less or more importance than they do with any of the other news items.

For example here's the full page government paid ad explaining the new Australian policy, and to the right of it, taking up almost as much space in the newspaper, is an article about how great it is that pop star Pink has just arrived in Australia. 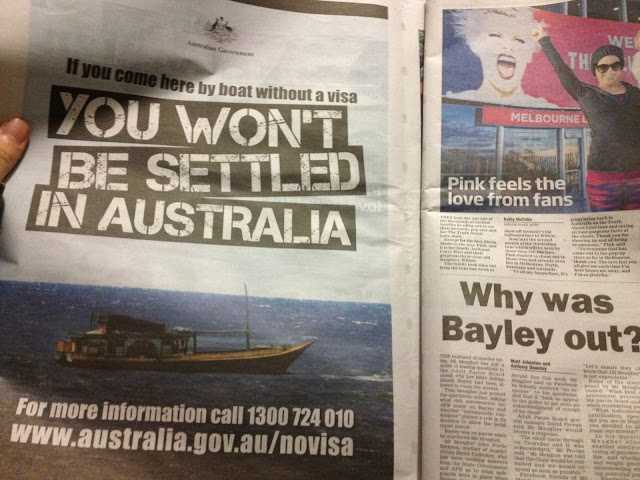 This is pretty much the same idea I was playing with in the poem thing I wrote in 2011; Nightly News.

The seekers of asylum riot,
they set the detention centres on fire,
send in back-up, get more barbed wire,
there's a pretty good sale on at Myer.
Speaking of which, I'm very excited to announce that Nightly News has been selected to be a part of Channels, the Australian Video Art Festival.

I guess I'll write more about it when it gets a bit closer, but so yeah, on Thursday September 19, you'll be able to watch it up on the big screen at ACMI, (the Australian Centre for the Moving Image). Amazing!

Anyway thanks heaps for reading, I have to go cook some dinner now, I'm so hungry I could eat a drawing of a horse.
Posted by Kenny Pittock No comments:

Hey pal, so here's something, guess what, last Sunday, out of no-where, I got a tweet from the Fifi & Jules radio show! Crazy right?! 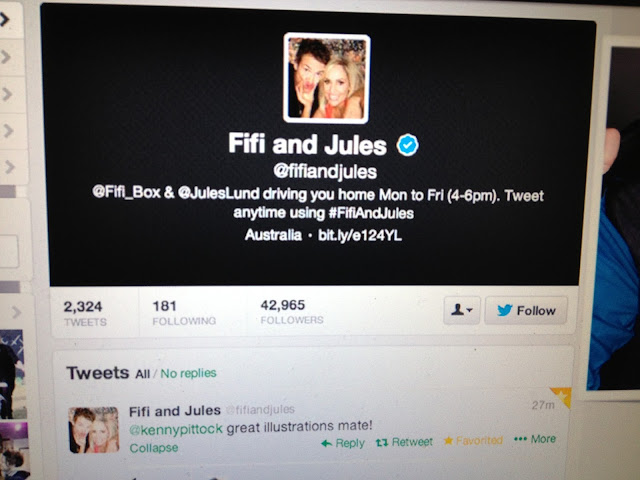 All it said was "Great illustrations mate!", so the message was pretty short and tweet, but I got such a thrill out of it.

I'm a big fan of the Fifi and Jules radio show and have been a listener ever since the start of 2011 when they took over the 4-6pm time slot from my all time favourite radio show, Hamish & Andy.

Anyway so I sent a tweet back saying thanks and not long after that they sent me another tweet with a little request for me to try and draw them.

I happily took on the challenge and said I'd have it done by the next day.

After that I went out for lunch with my best buds Al and Nel.

Al and Nel hadn't pulled up from the night before quite as well as I had which meant they weren't quite as good company as they usually are. 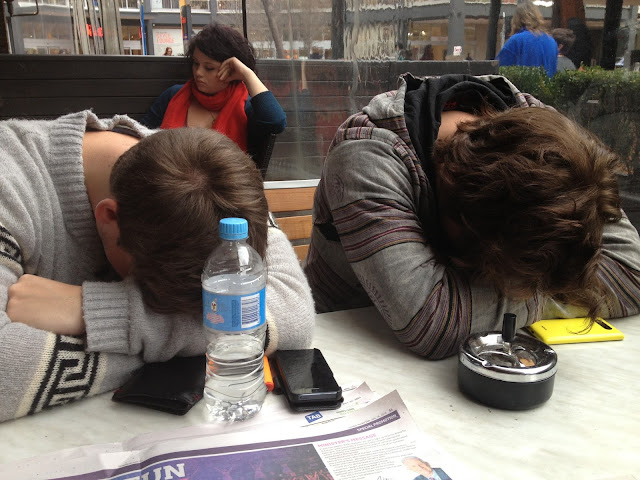 When I finally managed to pull myself away from all that lively conversation I got home and worked away on a bunch of studies for the drawing. By around about the time I was eating my next lunch I'd finished it.

Given that Fifi has just had a baby girl, and that a big part of last weeks shows were jokes around the fact that Fifi keeps breastfeeding her baby in front of Jules and the other crew on the show, I figured I'd work that into the drawing as well.

So yeah, here it is, hope you like it. 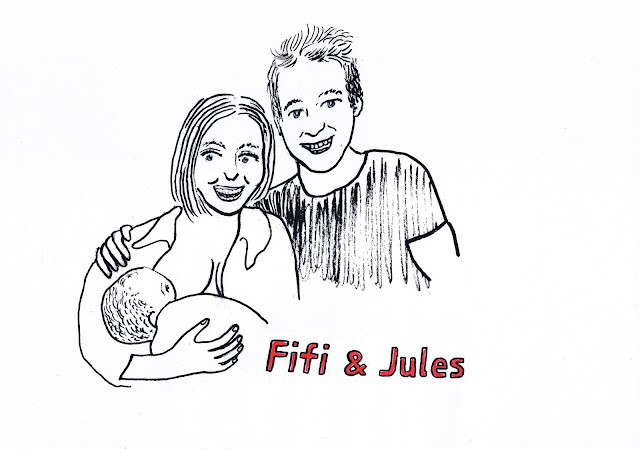 If you'd like to commission me to do a picture of you breastfeeding, (or even a picture unrelated to breastfeeding), then simply look up at the sky and wait for a shooting star to wish upon, or better yet, just send me an email.

Anyway hope you've got a smile on your dial, thanks heaps for tuning in.
Posted by Kenny Pittock 2 comments:

Hey skinny, how've you been? Hope you're feeling as happy as this meal. 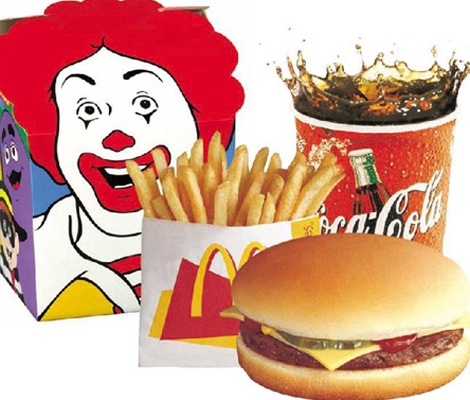 This is just a quick blog post about an exhibition that's come out of the protests to stop a McDonalds being built in Tecoma, (a suburb near my house). 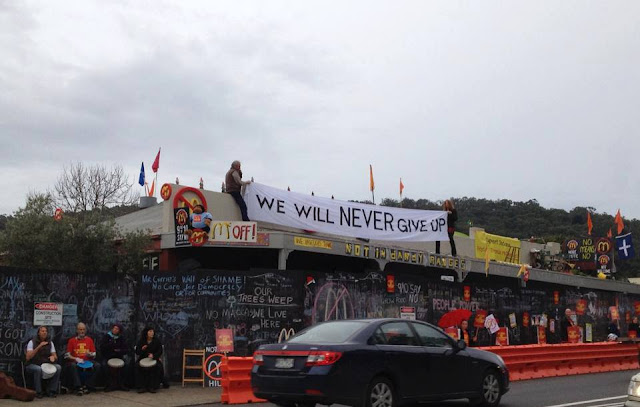 The protesters have been fighting their cause for a long time now, it's been going on for ages. You probably don't remember but I actually wrote a blog post about it all the way back in November, if you'd like to read it just click on the last word of this sentence.

So yeah, a lot of the Tecoma local business' have showed their support to the protesters, one in particular being DVD Destination, who have actually allowed a significant amount of their store to be turned into an art gallery. 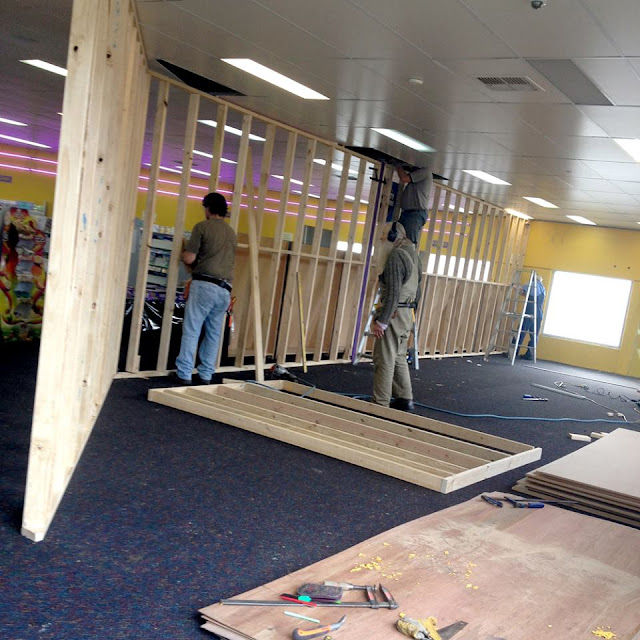 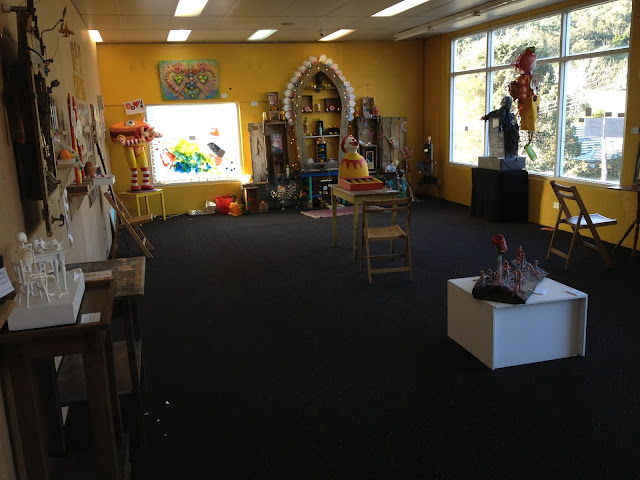 The first exhibition at Fatspace is called Fast, fried and fatal, 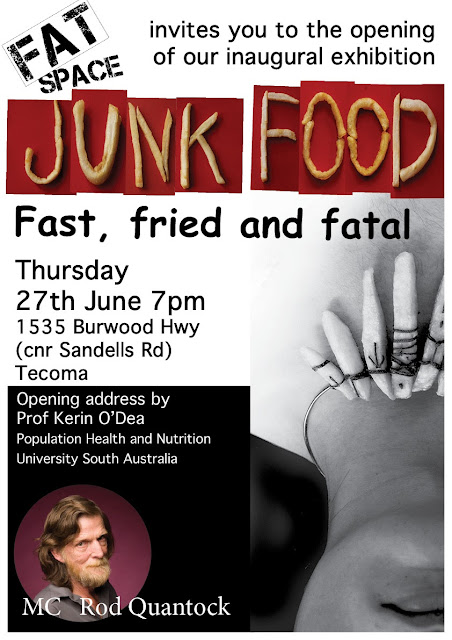 and I'm very McHappy to say that I was invited to include my Large Fries sculpture in the show.

It's acrylic on wood. 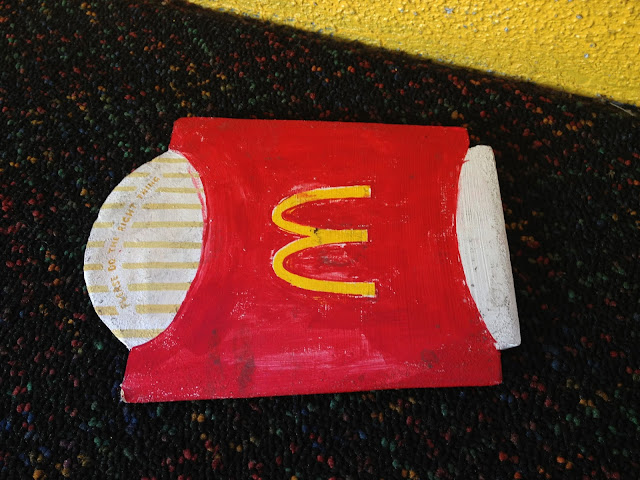 Here's a detail of the work. 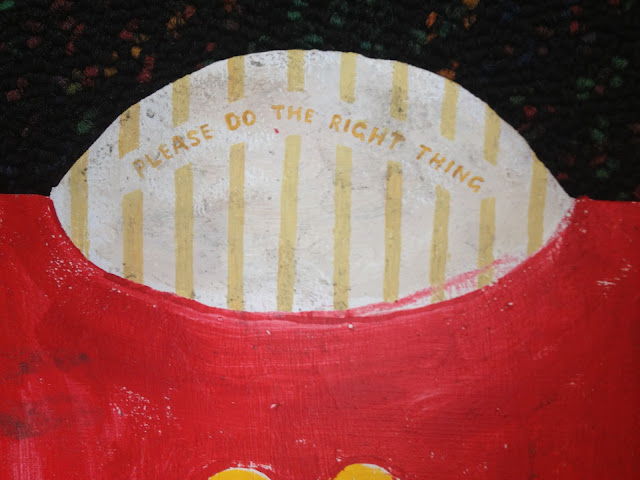 Here's me sitting next to the work. 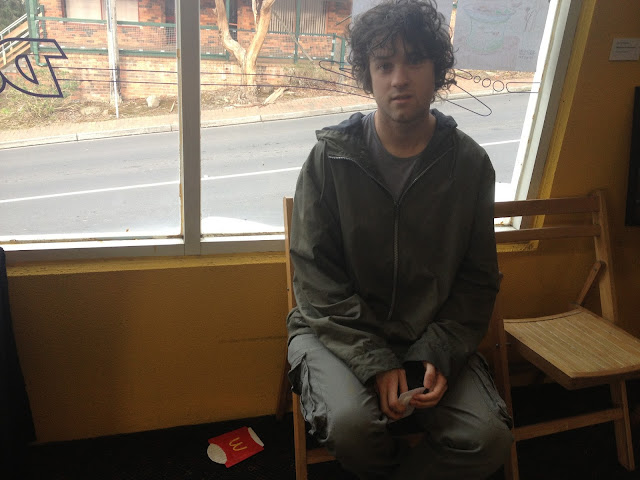 And here's me, right now, writing this blog post in the Ferntree Gully McDonalds, enjoying the free wifi, free newspaper and for only three dollars I got a double cheeseburger, a small fries and a cup of water. 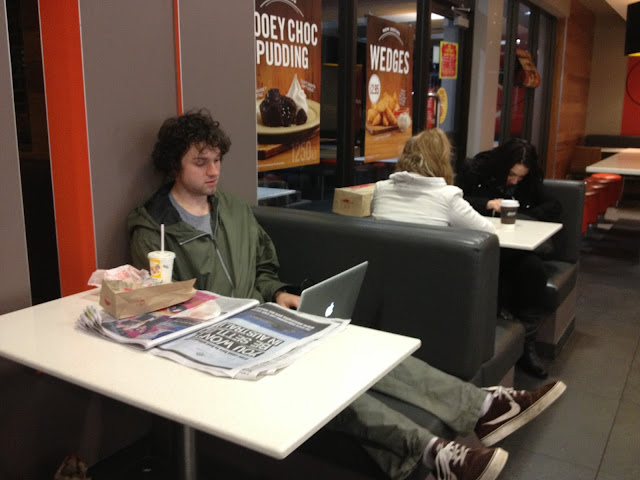 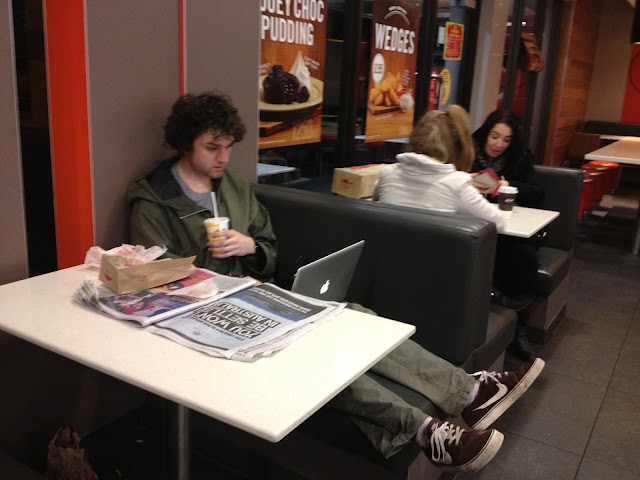 So yeah, if you're hungry for some McDonalds themed art definitely check out Fatspace, I think it's a really, really good show and I'm proud to have my little piece amongst it.

Fast, fried and fatal runs until July 25. Fatspace is open 12-4, Thursday to Sunday.

If you wanna know more about the protest, click here to go to the anti-McDonalds in Tecoma facebook group,

To finish this blog post off, here's some photos I took of a couple of my favourite slogans that are written on the protest wall. 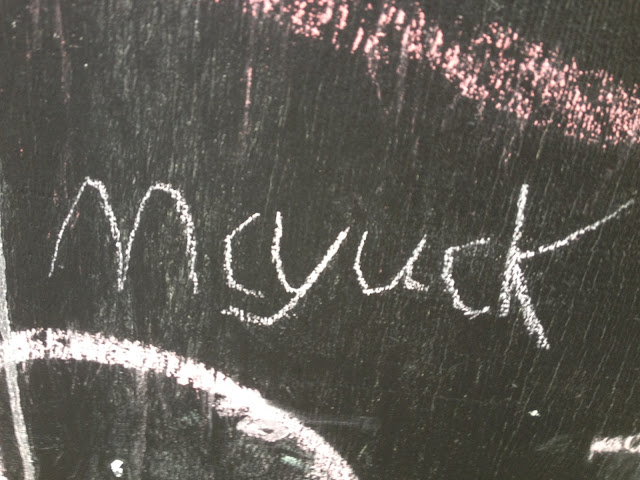 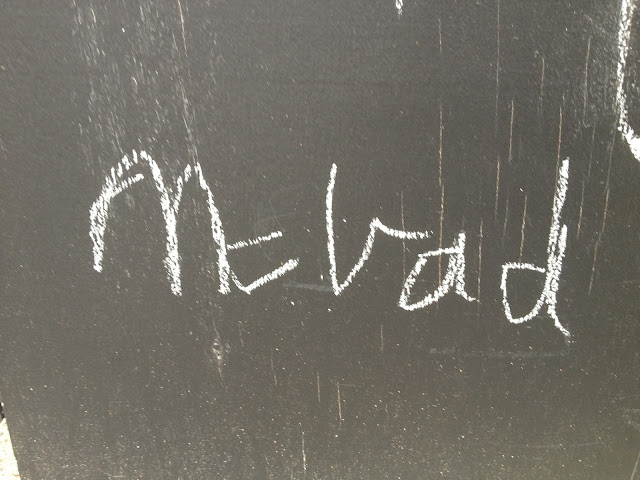 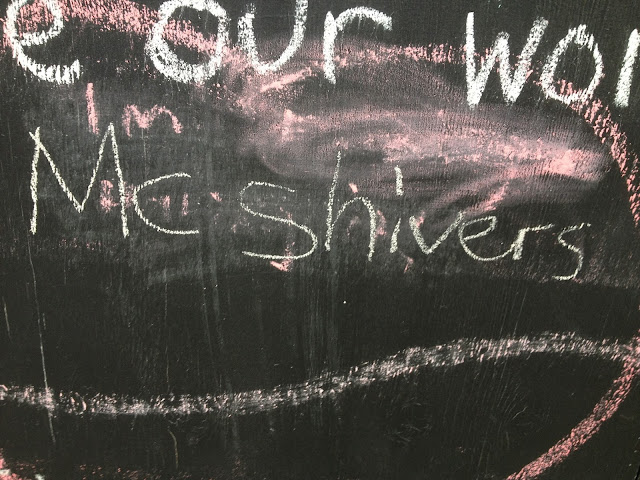 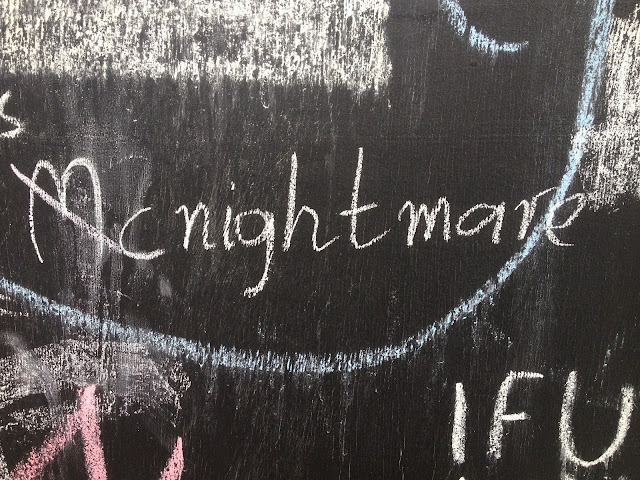 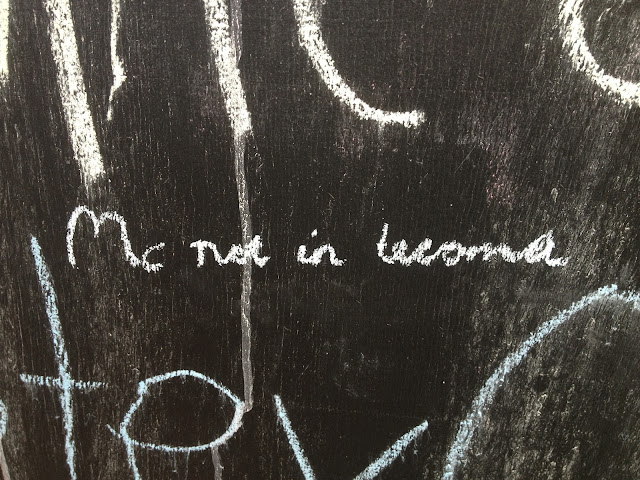 Judging a magazine by it's cover

Hey pal, I've decided that before I eat toast and go to bed tonight I really wanna update this blog and say hi to you.

Today while I was waiting to drive my friend home from the doctors, (#greatguy), I started drawing this woman, (#creepyguy). 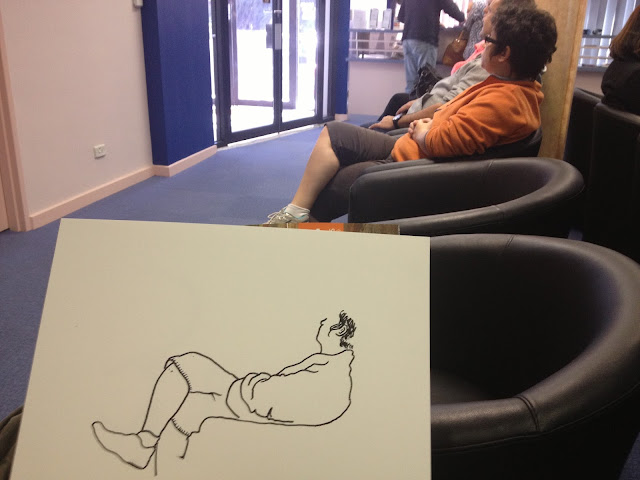 Selfishly, the sick woman went to see the doctor before I could finish drawing her. 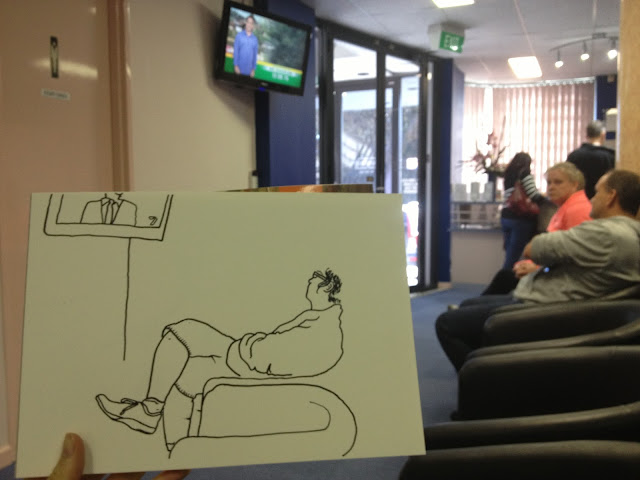 And so this is where the drawing finished. 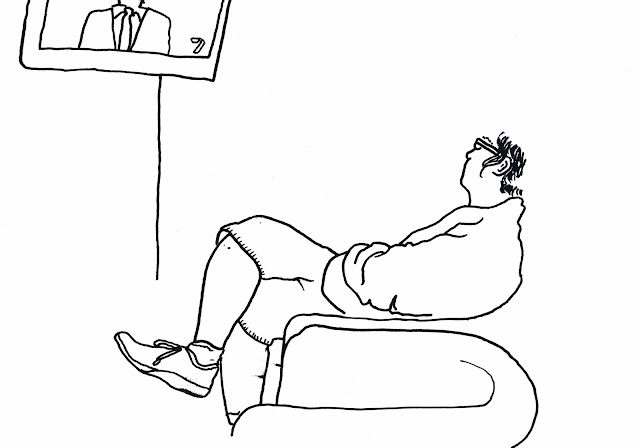 Once I stopped drawing I started watching the Channel Seven news on the TV up against the ceiling.

They were reporting about the thousands of people who are outraged over Rolling Stone magazine putting Dzhokhar Tsarnaev on the cover of their latest issue. 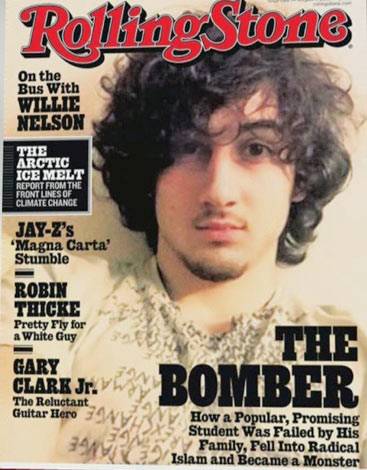 A lot of people are really upset and angry, saying it's disgusting to present this guy as if he's a rockstar.

Here's a drawing I drew of the news headline about Tsarnaev back in April when the Boston Bombings happened. 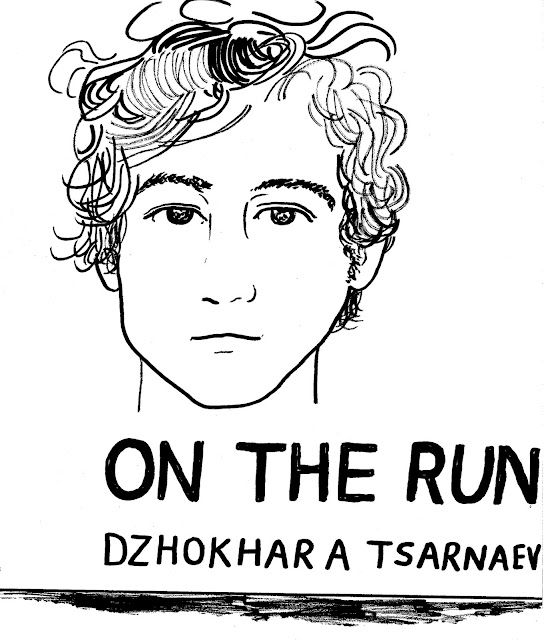 Tonight, using a marker and some pretty basic photoshop skills, I quickly adjusted the image of my scanned drawing to make it current with the latest Tsarnaev headline. 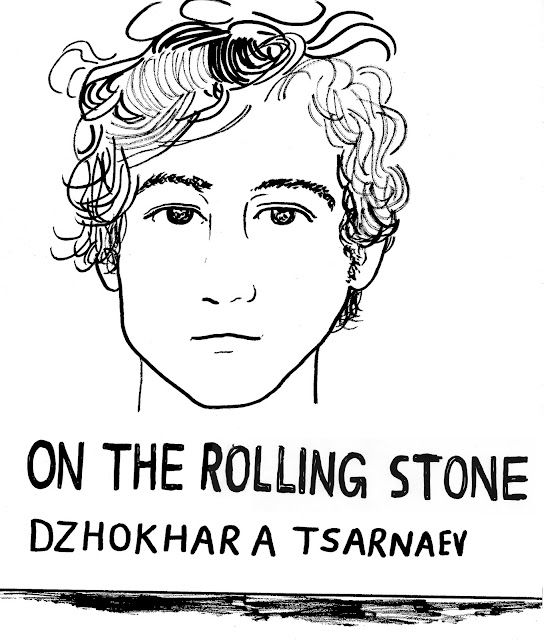 During the week of the Boston Bombings I was by myself in Perth and watched the 24 hour live updates constantly. It was horrific and I found it hard to stop watching. Like a lot of people, it really shook me up. I wrote about the experience a little bit here.

I don't know how I feel about Rolling Stone putting Tsarnaev on their magazine cover. Rolling Stone is a great magazine, everybody who's read it knows that, but it does seem obvious Rolling Stone must've known that by doing it they were going to hurt a lot of people.

I guess Rolling Stone probably felt they had to put Tsarvaev on their cover for the same reason I felt I had to draw him. I'm still not exactly sure what that reason is though.

Anyway after seeing the news I really wanted to read the Rolling Stone article, so I went to get a copy of the magazine, (which I guess is the real reason they put Tsarnaev on their cover).

At the newsagent I found that the new issue isn't out here yet. Here's a photo of the issue we're up to in Australia. 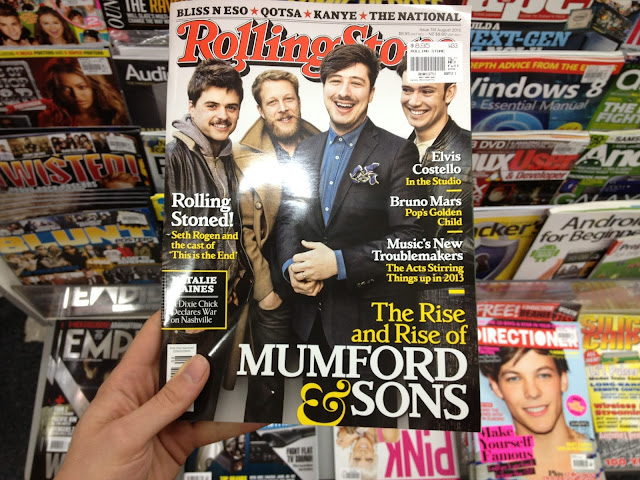 I wonder if anyone was outraged that Rolling Stone put Mumford & Sons on their cover. I doubt it though, those guys are the bomb.

But so ok, I'm rambling, really I just wanted to say hi. Thanks heaps for reading, and now I'm finally going to eat toast and go to bed. Night.
Posted by Kenny Pittock No comments: