Hey so it occurred to me the other day that I can't remember the last time I saw someone naked.

Like any normal person who has that realisation, I figured the obvious easiest way to fix this was to do some life drawing.

So that's what I did, I went to a three day life drawing workshop, and here's a couple of photos from that. 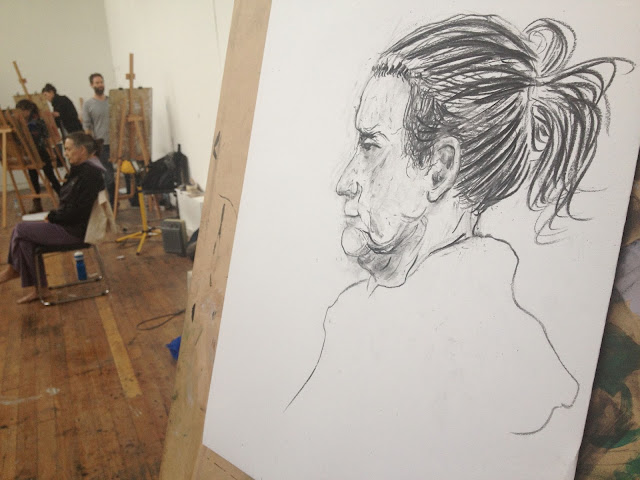 I should probably point out that I had the life models' permission to take the photos. 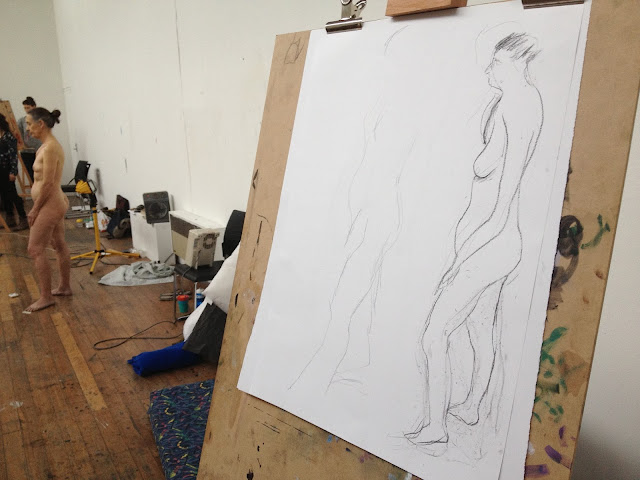 I should also point out that none of the drawings were finished at the time I took these photos. 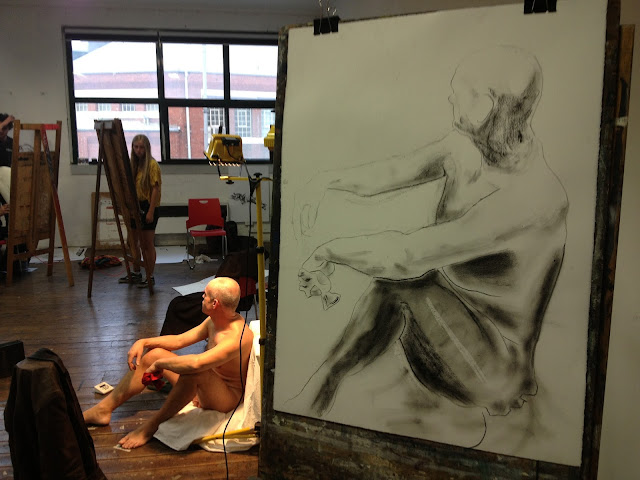 Another thing I just thought of that I also want to point out, unrelated to this, is that three times in the last three days I've seen somebody drinking an Egg Flip flavoured Big M.

It's not like I've been around a lot of people either, mostly I've just been by myself, so three feels like heaps.

Wait, so what was I talking about? Oh right, life drawing, cool. 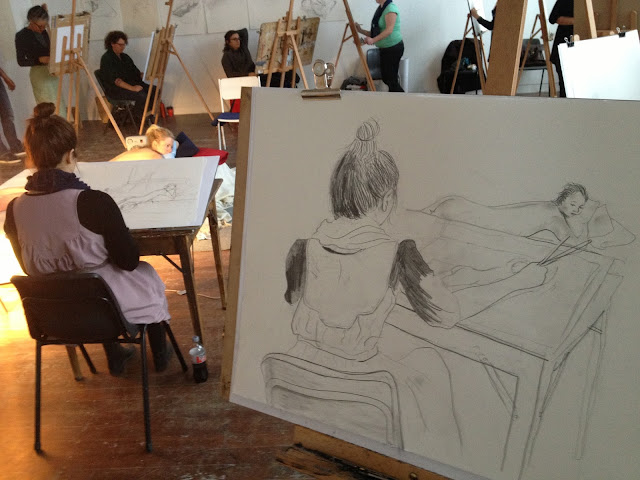 I think the arm in this drawing might actually be the thing I was most happiest with from the entire three days. 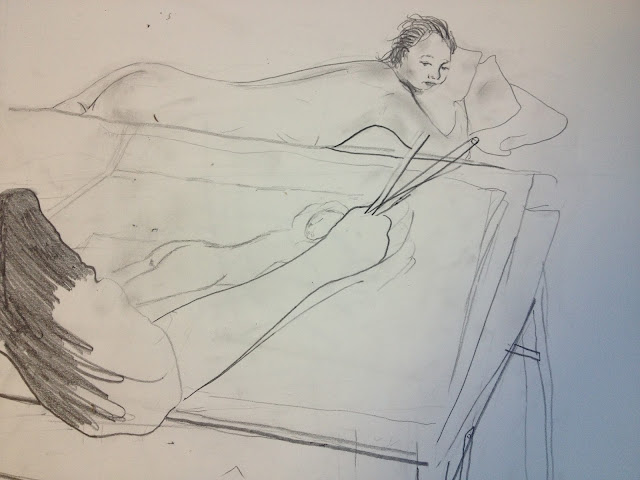 Back when I was in tafe we used to do life drawing every Thursday. I'd kind of forgotten how much fun charcoal is.

Charcoal's a medium that forces you to think in tone, which is something I'm consciously trying to improve because, as you can see from the above images, I'm much stronger working in line.

With this in mind the next day I gave myself a little challenge to use a stick of charcoal to draw whoever was sitting opposite me on the train. 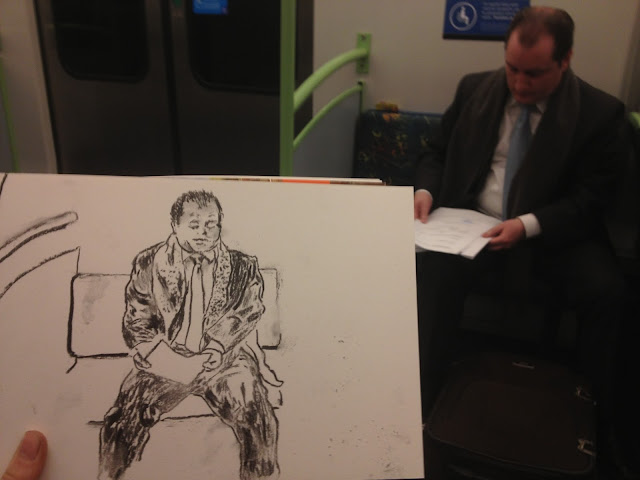 As the man was getting ready to get off the train I showed him the drawing.

The man was friendly. He said "Good on ya mate, I'd shake your hand if it wasn't black... I don't mean it like that. You know, your hand is dirty. Because of the charcoal. Ha, you know what I mean".

Ha, but so yeah, my hand was real grubby.

That's the thing with charcoal, it's stupidly impractical. It makes that loud fingernail-on-chalkboard screech, it leaves you and everything around you filthy, and on top of that every once in a while you'll be halfway through drawing a line, applying no more pressure than you'd been using the last hour, and suddenly the end of your charcoal stick will snap right off and fly away like a little blackbird.

The other thing about charcoal is that it never seems to set. Even after I've carefully gotten the drawing home and sprayed it twice in fixative I'm still worried about it smudging.

Having said all that though, I do love charcoal. 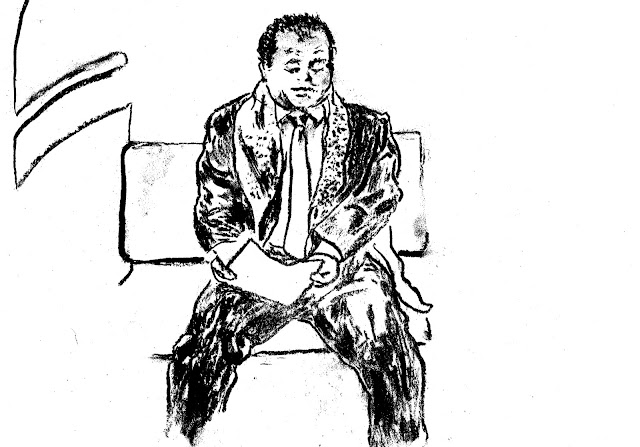 But so alright, now that I'm done talking about having hands people don't want to touch and spending three days looking at naked people, it seems like as good a time as any to move onto telling you that tomorrow I'm going to Perth!

I'm flying over in a Virgin aeroplane to install a piece in a group show at Moana Gallery. Here's the flyer. 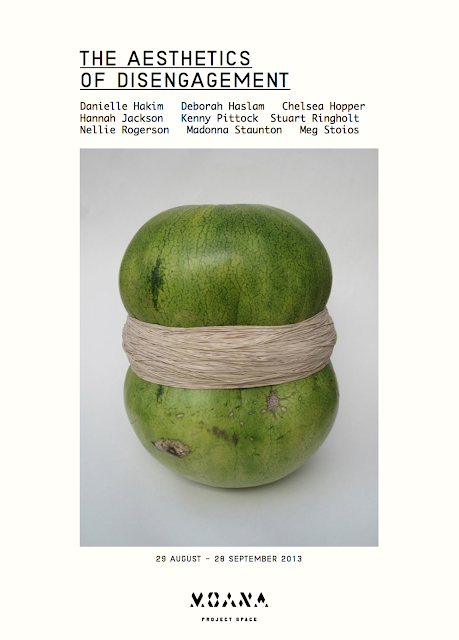 Curated by Perth born Melbourne based Chelsea Hopper, the exhibition's called The Aesthetics of Disengagement, and "explores the way in which contemporary art acts as a powerful yet largely unacknowledged player in the articulation of depression in Western culture."

I'm pretty excited about this show, which is a little funny given that the show's mostly about depression.

I haven't been to Moana yet, (It rhymes with goanna, that's how I've been remembering the name), but the space looks rad and seems to have some pretty intense architecture.

I'm also just excited about getting away and walking around Perth for a bit, I imagine that surely it'll be more relaxing than the last time I was there. (Click here to read a thing I wrote about the only other time I've been to Perth).

But so yeah, if you're in Perth this week send me an email if you wanna get a coffee, or a beer, or I don't know, an Egg Flip flavoured Big M.

At the very least though, please come to the opening at Moana this Thursday night, (August 29), from 6-8pm. It's gonna be a lot of fun.

Moana Gallery is in "The heart of Perth's CBD" at 1F 618 Hay Street, and if you can't make it to the opening the show runs from August 30 to September 28.

Thanks heaps for reading, hope you're going good and hope to see you soon.
Posted by Kenny Pittock 1 comment:

Hey! I feel like I haven't written here in a while. Hi, how've you been?

In theory class today we watched a scary movie and now I'm anxious.

I feel like that should lead up to a joke or something, ha, but no, I just thought I'd let you know that while I'm writing this I'm a bit shaken up. It's kind of embarrassing how much scary movies effect me.

Do scary movies scare you? Is that something you can relate to? I doubt it, you're probably much tougher than me, but anyway scary movies aren't related to this at all, what I really wanted to start this off by mentioning is that I just added an "UPCOMING" section onto my website.

So yeah, I'll keep updating that and so feel free to check in on it from time to time, if you're not yet sick of the site of me.

The first thing I've put into UPCOMING, which is pretty rad, is this group show at The Projects Gallery that opens on Saturday, 4-7pm. If you're free it'd be awesome if you can make it to the opening. 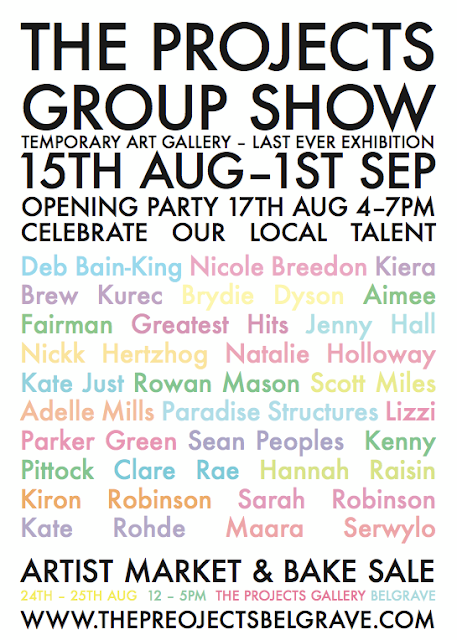 I installed my work there the other day and yeah, the show's looking great, really hope you get a chance to come down to Belgrave and see it.

In other unrelated news, on Monday I decided to draw a picture of AFL footballer Adam Goodes over the length of time I spent watching Eddie McGuire on TV. 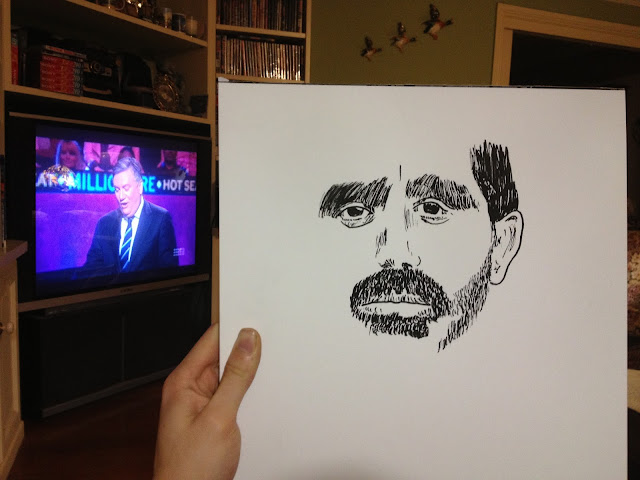 So here's the result of that. 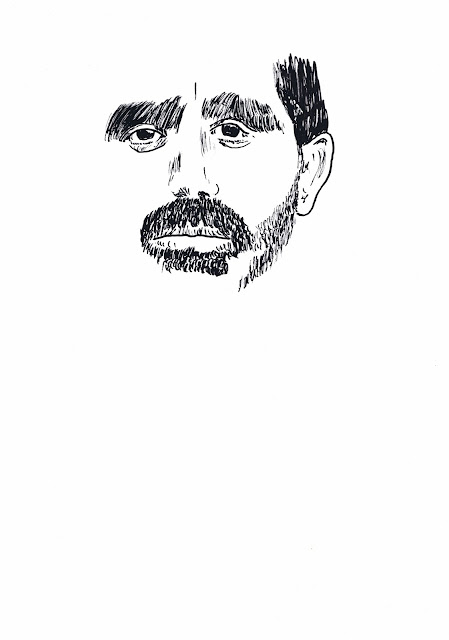 In other unrelated news, I spent last Sunday with just about everyone I'm related to.

It was my Pop's 90th birthday.

Here's a blurry photo I took of his hand cutting the birthday cake. 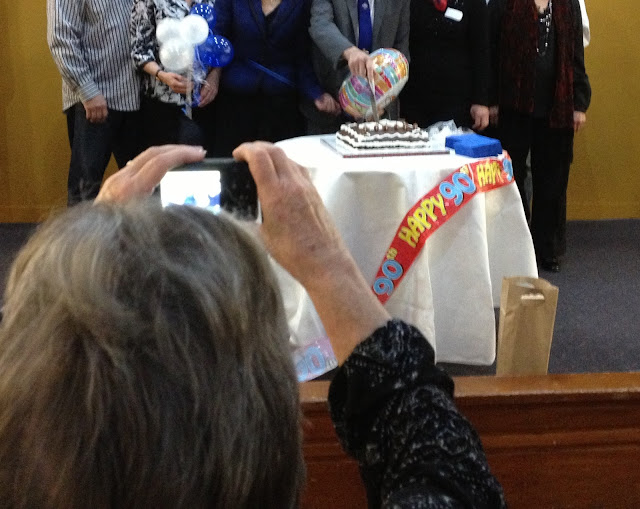 In other unrelated news, here's a photo of my third drawer down. 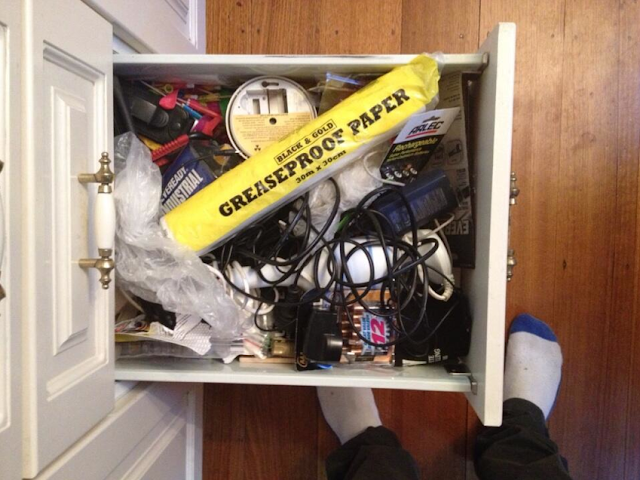 In other unrelated news, a couple of weeks ago I was lucky enough to do a job for the shop Third Drawer Down, where I made 8 drawings that very excitingly are being used as icons on Third Drawer Down's relaunched website.

Pretty awesome, here's a screenshot I took of my drawings in their new home. 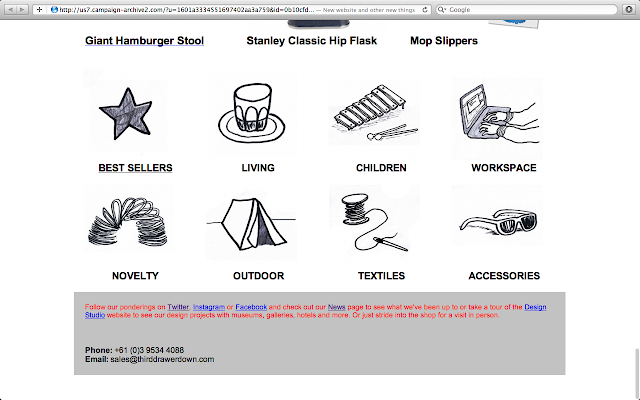 I really love doing this kind of work. The slinky was probably my favourite to draw.

And finally, in other unrelated news, I'm still feeling a bit funny after watching that scary movie and so I think I'd better wrap this up and go watch a cartoon or something.

Thanks heaps for reading, hope you're doing good and hope to see you relatively soon.
Posted by Kenny Pittock 3 comments:

Yawn to be wild

Hey pal, this'll be a pretty quick blog post but basically I'm just very excited to let you know about an article in the current JULY/AUGUST issue of Art Guide Australia.

The article, titled An Artist Walks into a Bar and written by Sydney writer Andrew Frost, talks about the use of humour in art, and amongst some of the really great contemporary Australian artists that are mentioned, there's a paragraph or two that talks about my work. How cool is that?!

(If you happen to have read the article and you're interested in reading my Adam Cullen tribute thing that it mentions, click here).

But so yeah, if you're out and about pick up a copy of Art Guide Australia.

To help you find it in the newsagent, here's the cover. 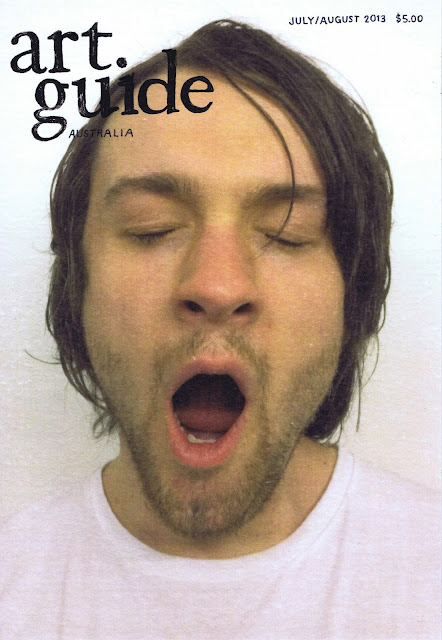 Actually no, that's not the cover, that's just a photo of me that I painted some text onto. 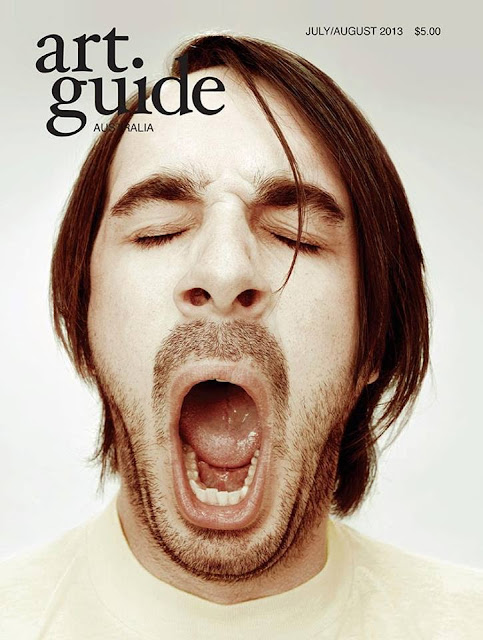 Here's my one and the real one, next to each other in the newsagent. 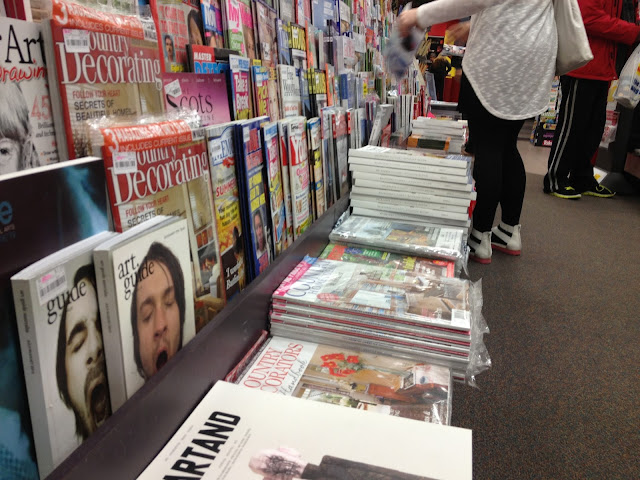 And here they are again in a big stack on the counter at the Degrave Street art store. 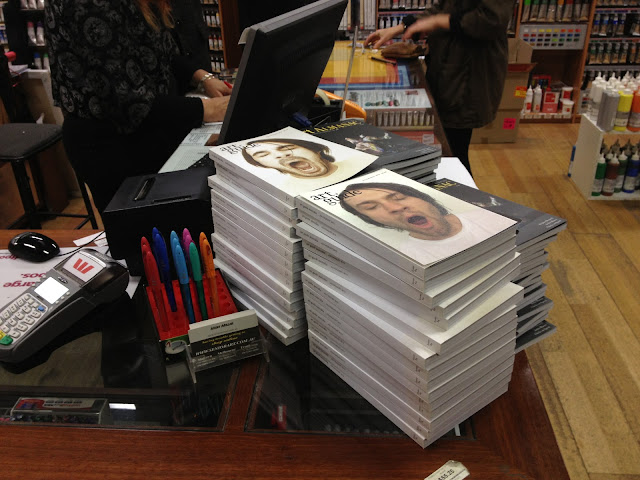 The image on the cover is a 2007 work by Sydney born London based photographer Julien Wolkenstein. It's from his series Yawning is Contagious, and is titled Sebastien.

To specifically try to get myself looking like Sebastien I stopped shaving for a week, (very itchy). 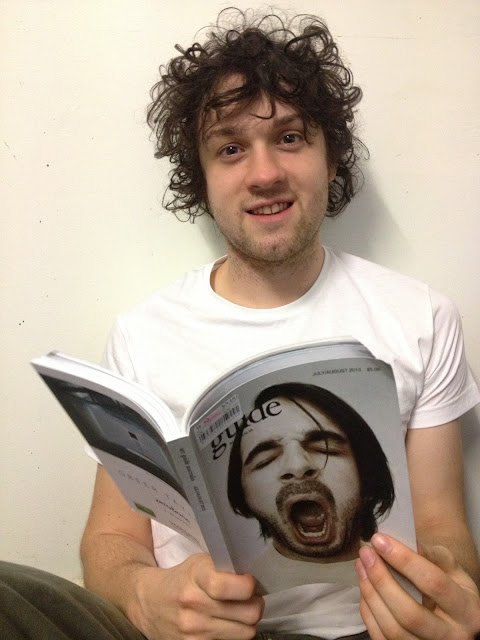 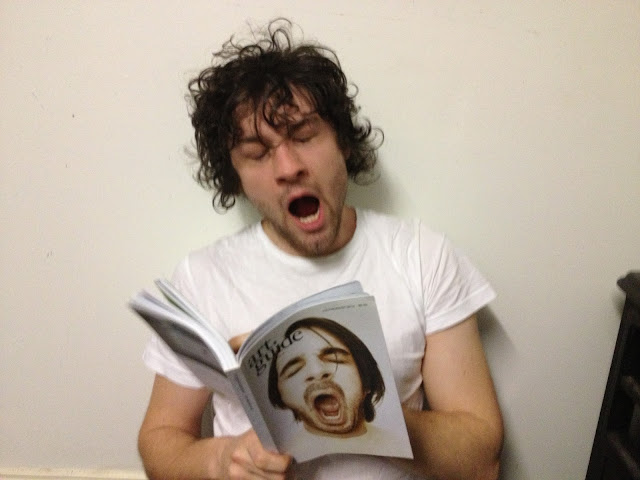 Then I got my hair on the straight and narrow. 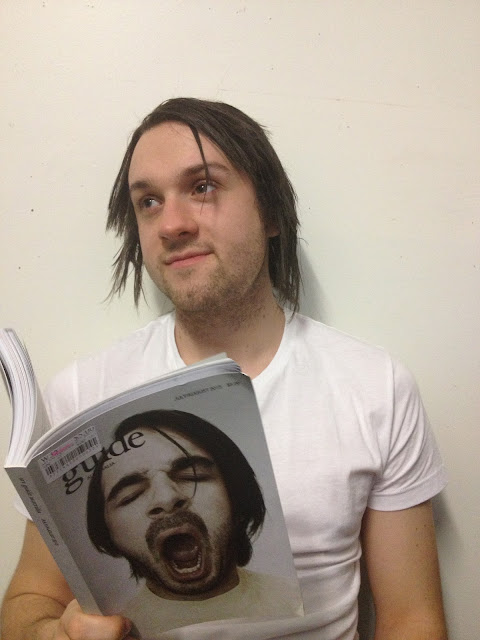 And look at me now; a natural yawn killer. 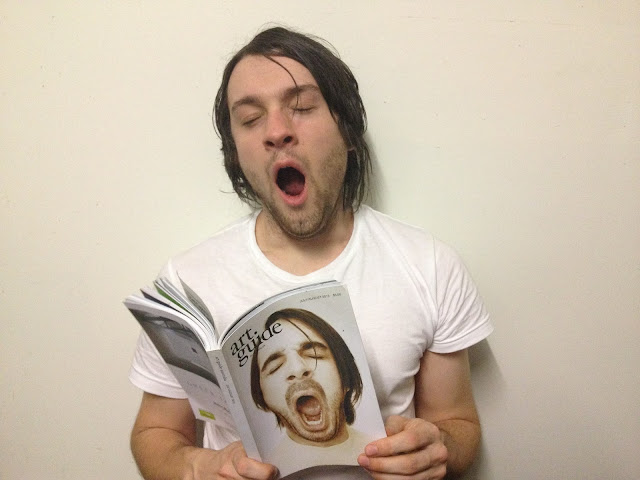 Ha, but so yeah, that's all I wanted to write, thanks heaps for reading. Anyway I'm gonna go shave, and I think maybe after all this yawning I'll take a nap. 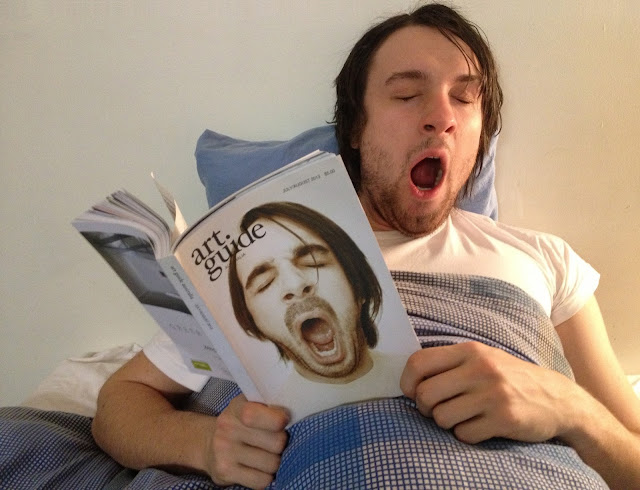 Sure it'd be nice if the world was Cadbury, but wouldn't it be ever nicer to just stay in bed all day reading Art Guide?
Posted by Kenny Pittock 2 comments:

You need to be different if you wanna stand out in this world, that's why I did a painting for my twitter profile pic. 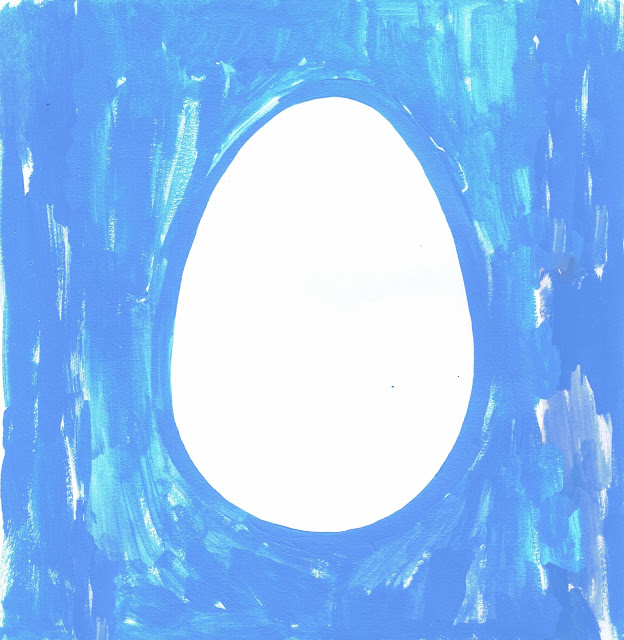 Ha, hey pal, this one's a twitter reference, hopefully you're down with twitter but it's no problem if you're not, I reckon maybe you can enjoy it just as a painting of an egg.

If not, I guess the yolk's on me.
Posted by Kenny Pittock 4 comments: