Home is Cowwarr the heart is

Hey pal, great to see you, how've you... hang on a sec, my phone's ringing. Sorry, I'd better take this. In the past I might've just kept writing the blog post and then rung the person back later, but not anymore; as you can see in the headline to this article in the Gippsland local paper, nowadays, I answer calls. 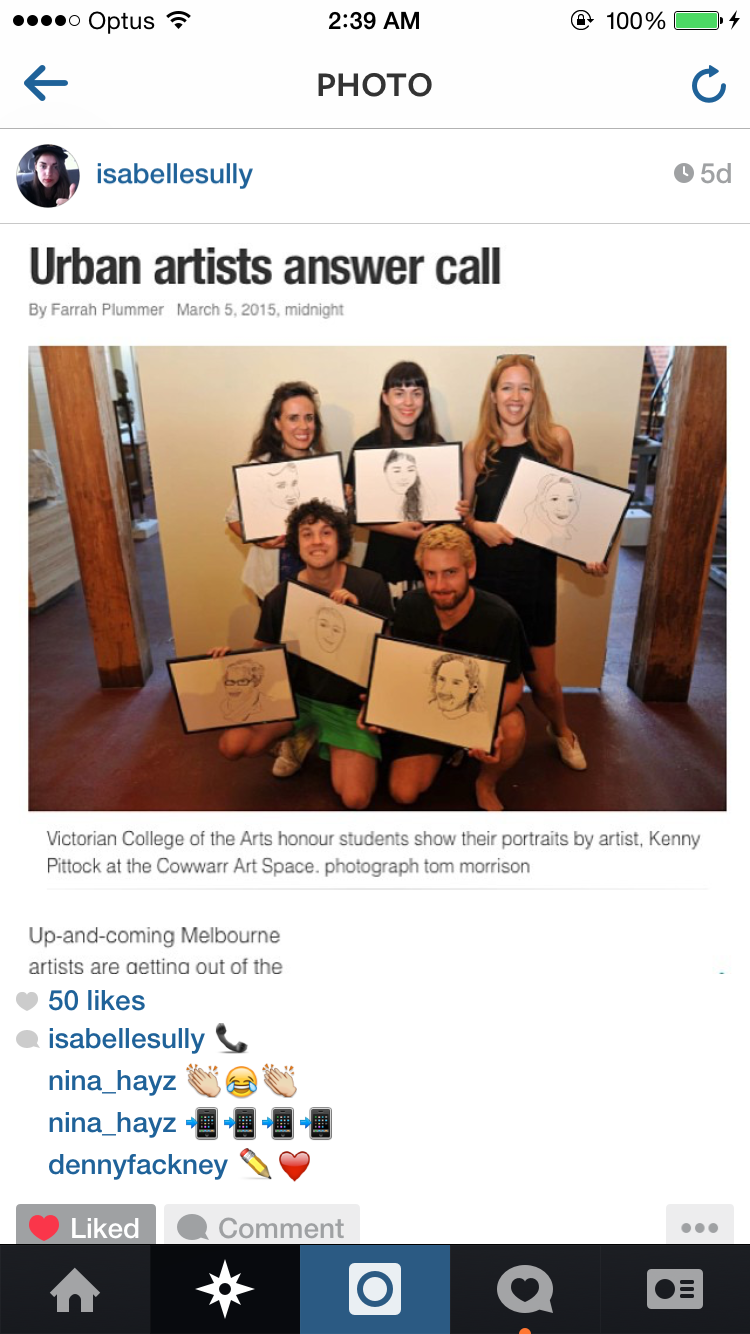 Ha, hi, I just thought I'd write a quick little blog post reminding you that Future Now, the group show I'm in at Cowwarr in Regional Victoria, curated by Rosemary Forde, is still on until April 27. Oh and also yeah, as seen in the above screenshot of my friend and fellow artist Isabelle's instagram, there's an article about the show published in the current LaTrobe Valley Express. Click on this sentence to read the it.

I really like the article, I can't remember the last time I was referred to as 'Mr. Pittock'. Also, having lived my whole life in a forest, I don't think I've ever been called an "urban artist". So thank you to the writer Farah Plummer for providing me with some much needed street cred.

Another fun feature of the article is this photo of the other artists and I holding my portraits of them, and all of us wearing a very natural smile. 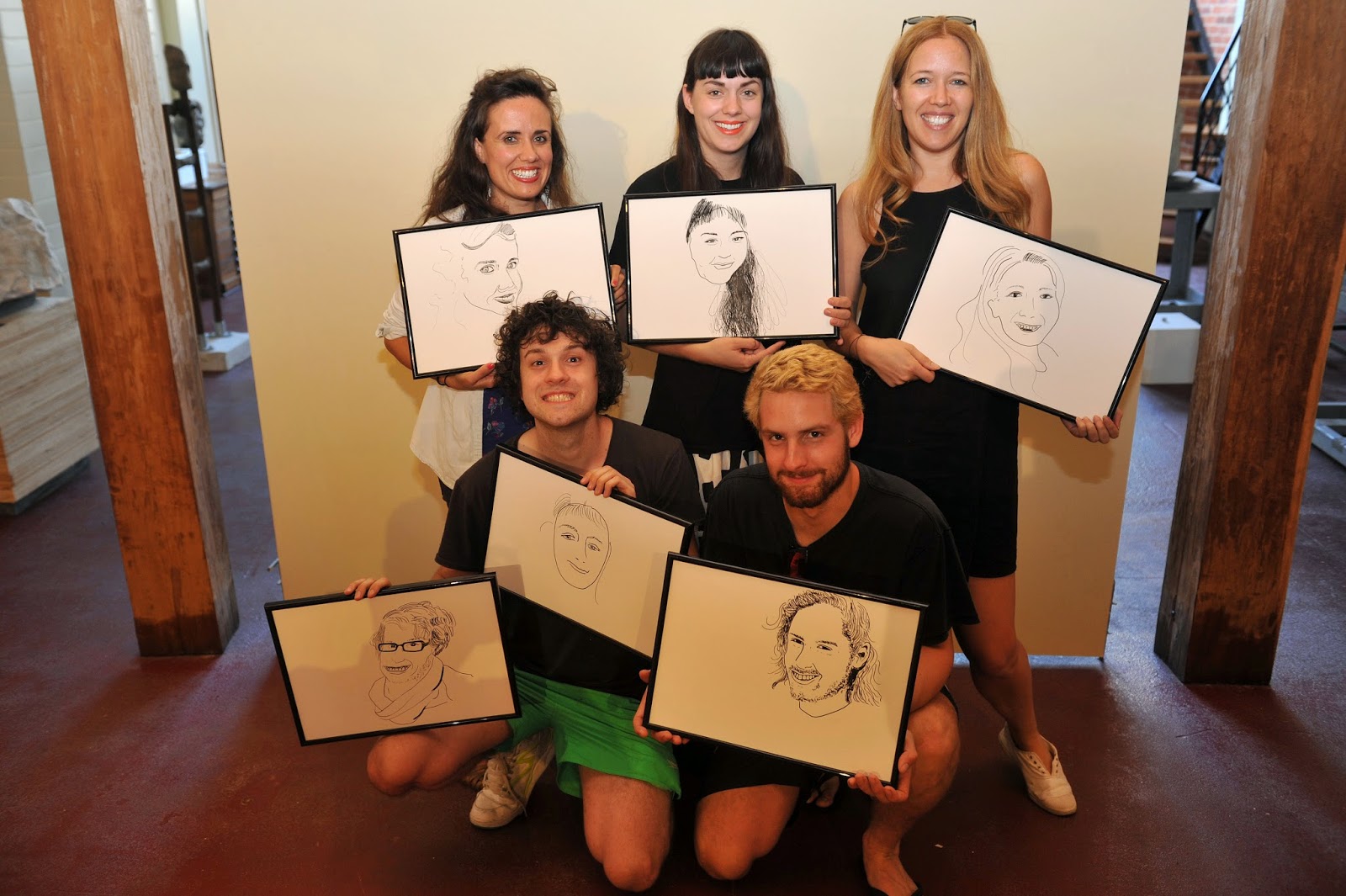 It's a fun upbeat photo, contrasting nicely with this much more moody, serious artist photo that was also taken of Isabelle and I beginning to install our work. 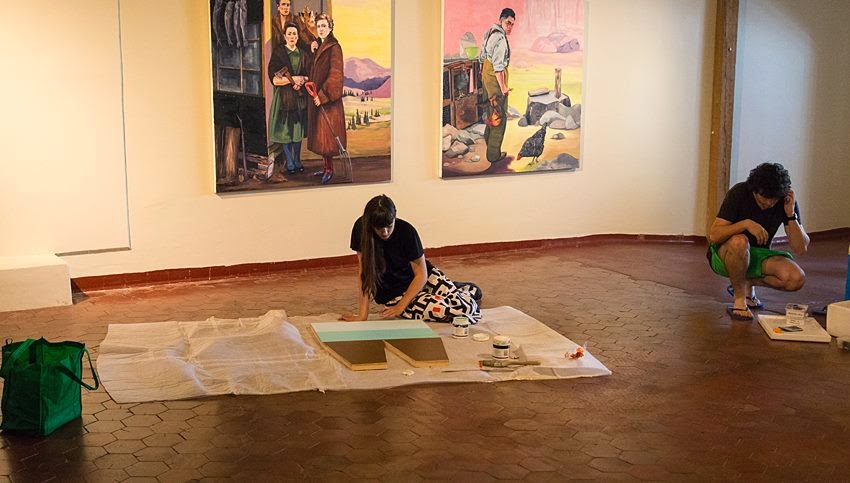 Photos of me are usually a lot cooler if I don't know that they're being taken. For instance, if I'd known that the above photo was being taken it probably would've turned out like this. 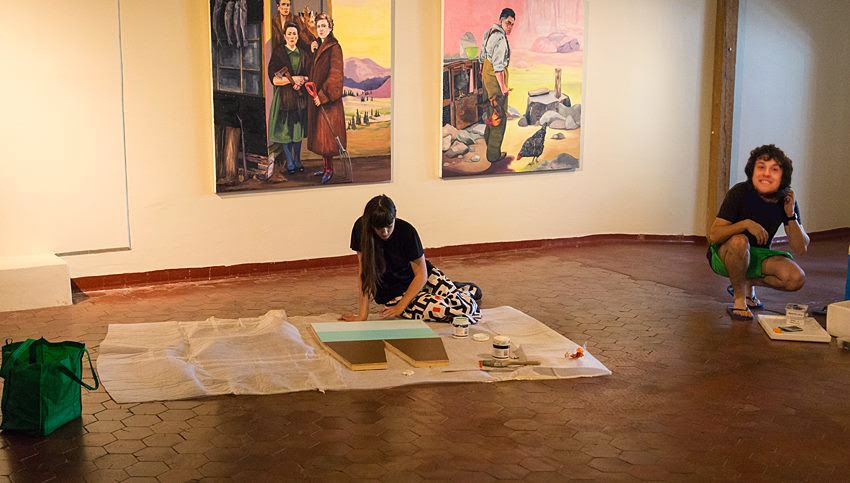 While I'm going through photos from Cowwarr, here's Dan and I tending to the gallery garden. As you can see, Dan is praying that the plants will grow, meanwhile I'm trying to make the plants grow using a watering can. Which one of us has the better gardening technique? That's for you to decide. 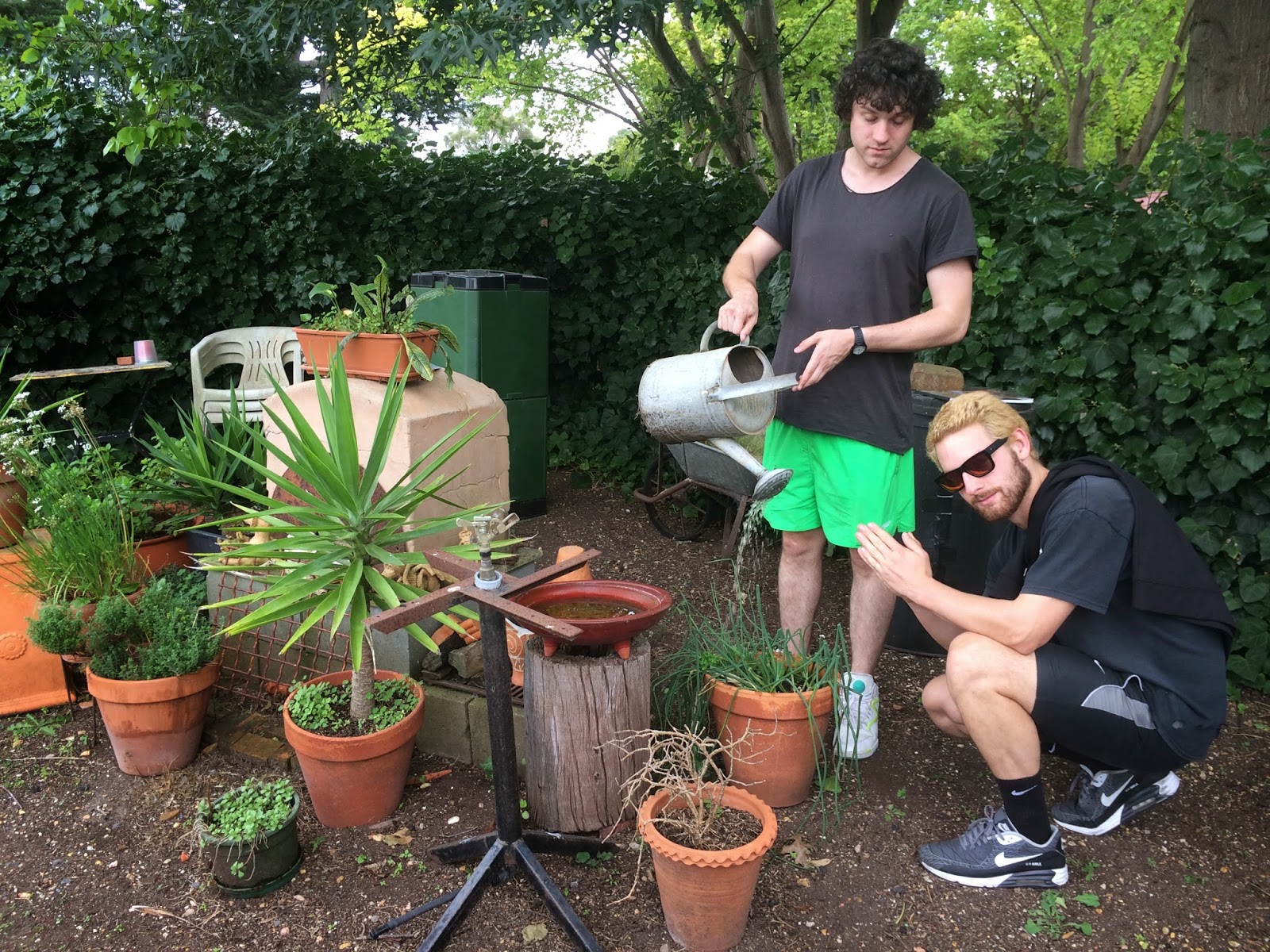 (Given that there wasn't any water in the watering can, my guess is that both techniques are equally as effective.) 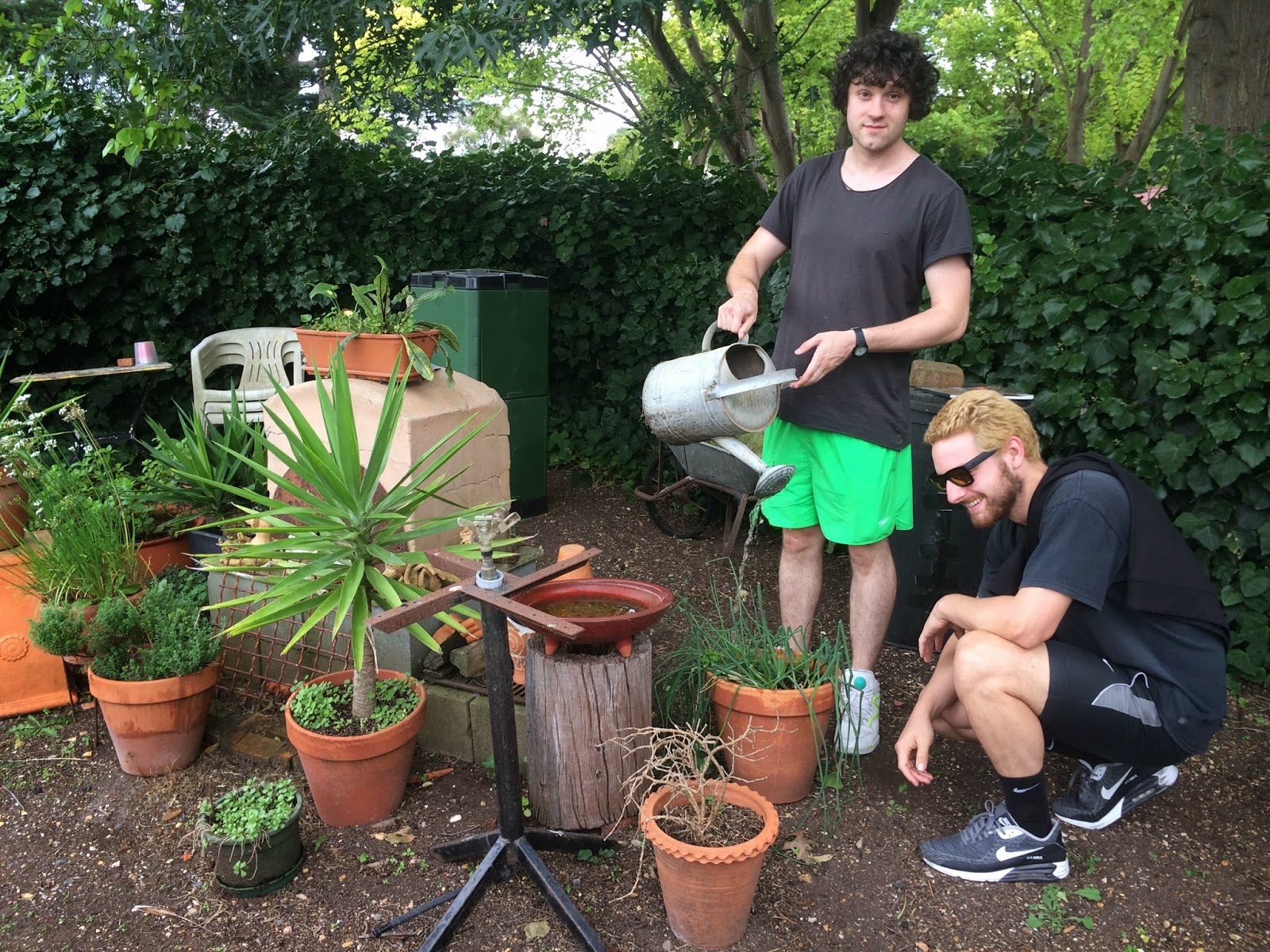 Cowwarr's a pretty funny place, it's about a three and a half hour drive from Melbourne; there's no phone reception or internet and it's a bit like going back in time. The gallery was created by the mayor of Wellington, Carolyn Crossley, that's her on the left. 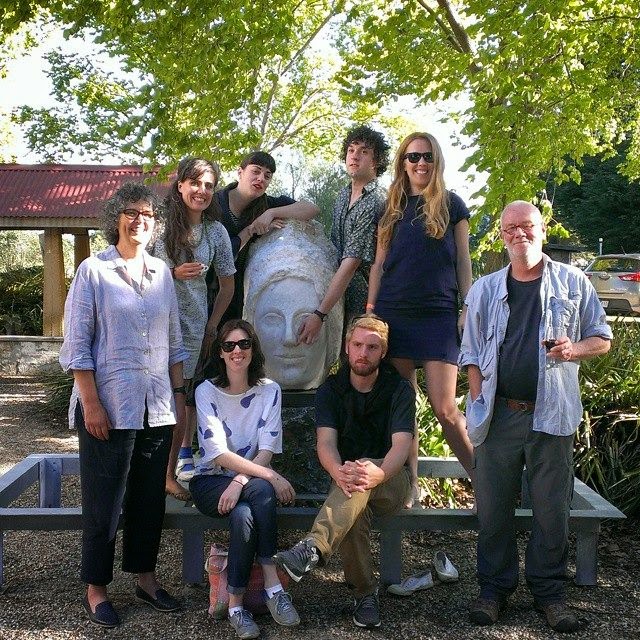 (She now runs the gallery with her wonderful partner Clive. That's his awesome sculpture whose nose I'm picking.)

Carolyn established the gallery back in 1992, before that the building was a butter factory. Don't worry, I made plenty of "I can't believe it's not butter factory" jokes.

Anyway so the four other artists and I all drove down to Cowwarr in my car, we were kind of like the Scooby Doo gang, except that the only mystery we had to solve is "What the heck are we doing with our lives?!" Which is a tough one to figure out in a weekend.

I guess if we were looking for enlightenment though then this was the place to find it. We stayed in an old Church convent stuffed full of huge Jeff Koonsy sculptures like this. 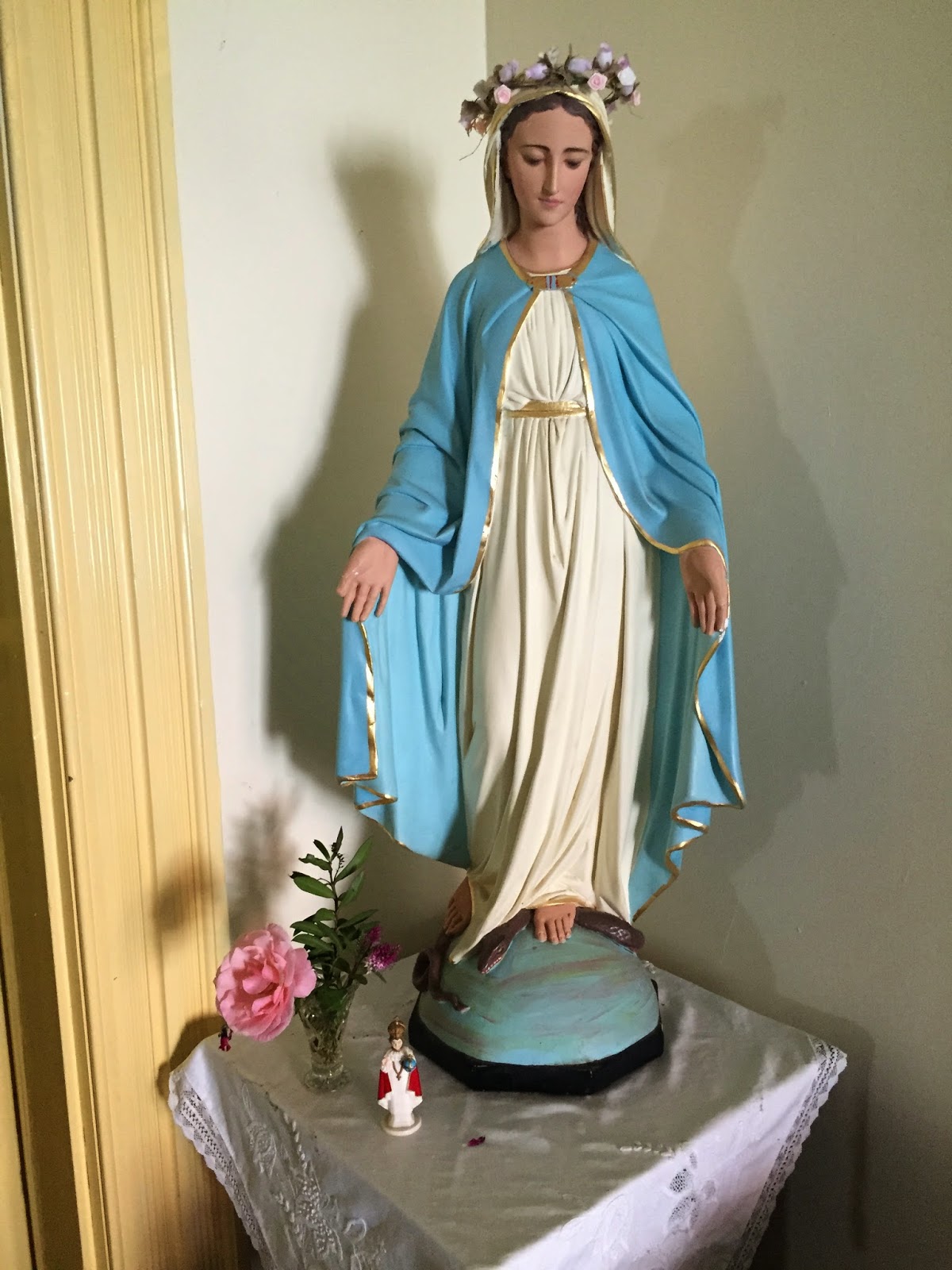 Given that the view from my studio looks out onto a Church, and is around the corner from a bottle shop, I'm used to working near spirits. On Saturday morning I woke up early and began sculpting a Frosty Fruit, while drinking coffee with weird milk and reading Jesus. 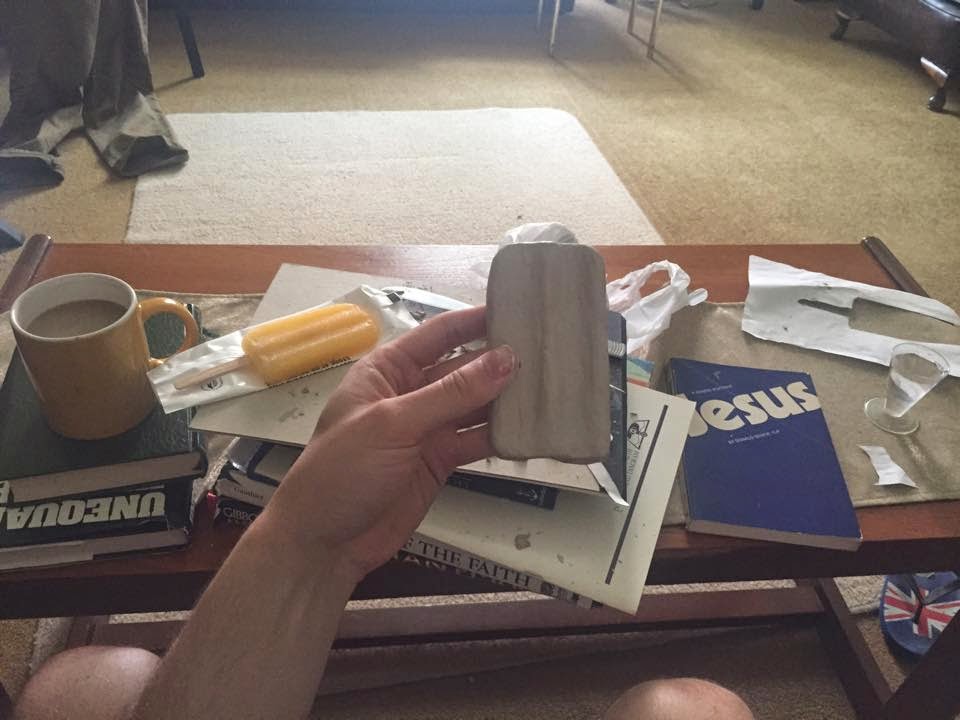 Later in the morning I continued sculpting a Frosty Fruit I was joined by the others, who all did what you're supposed to do with Frosty Fruits, which is eat them. As seen here in the worlds blurriest photo. 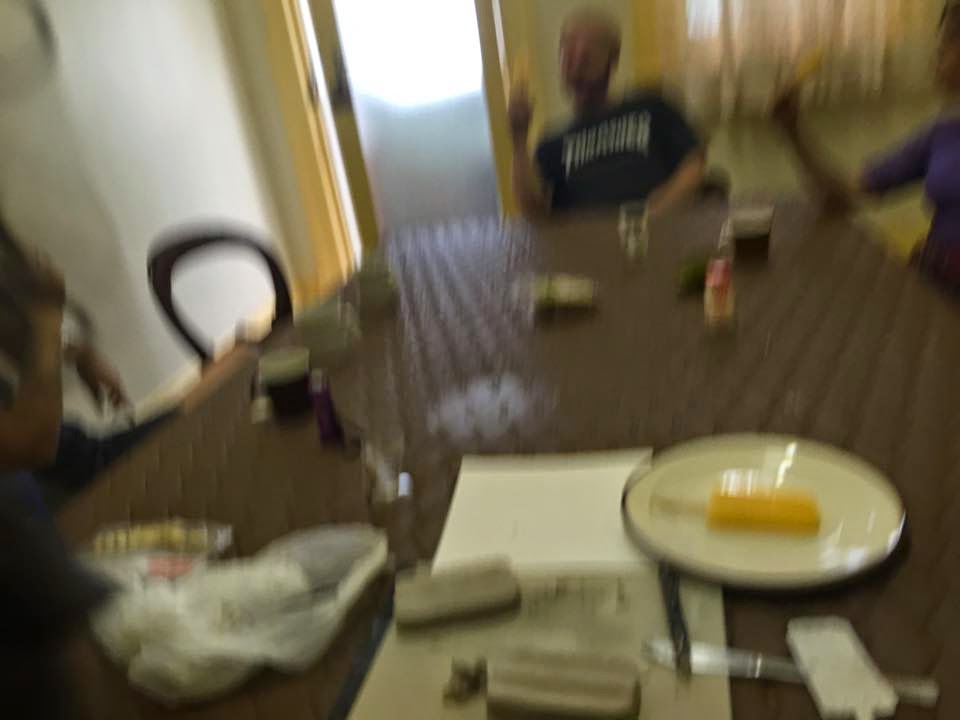 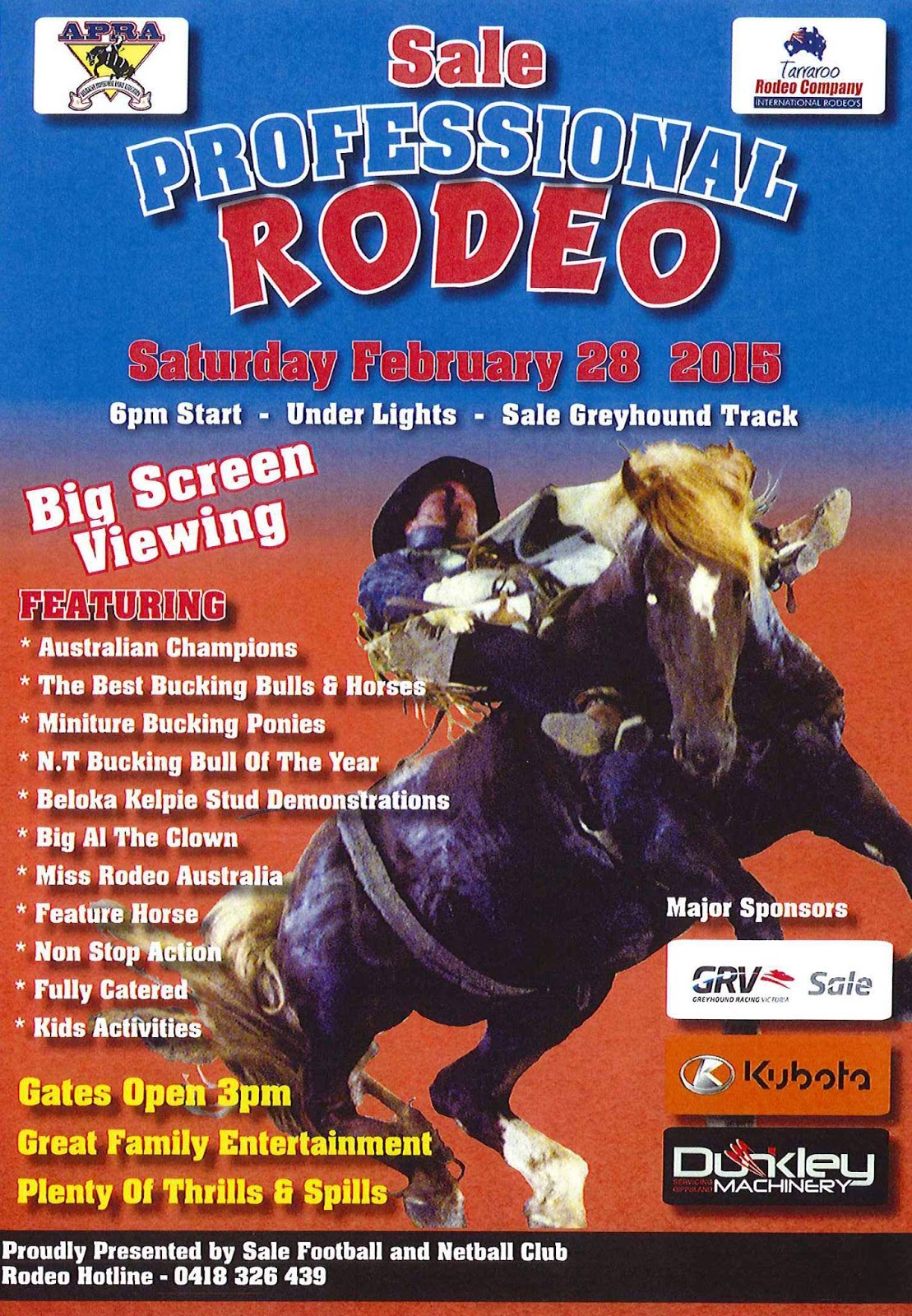 The rodeo crowd was pretty amazing. You know how when someone takes a baby to one of those professional photography places and they dress the baby up as a cowboy? Well everybody looked just like that, except they actually were cowboys. And cowgirls. Cow people. Cowwarr people. Not just people though, at one point we saw a dog riding a horse. That was a real highlight. I wasn't quick enough to get a photo of that but I did take a photo of this lady who rode a horse whilst singing. I wrote down the lyrics to one of her songs; "His fists are big but my guns are bigger, he'll find out when I pull the trigger..." 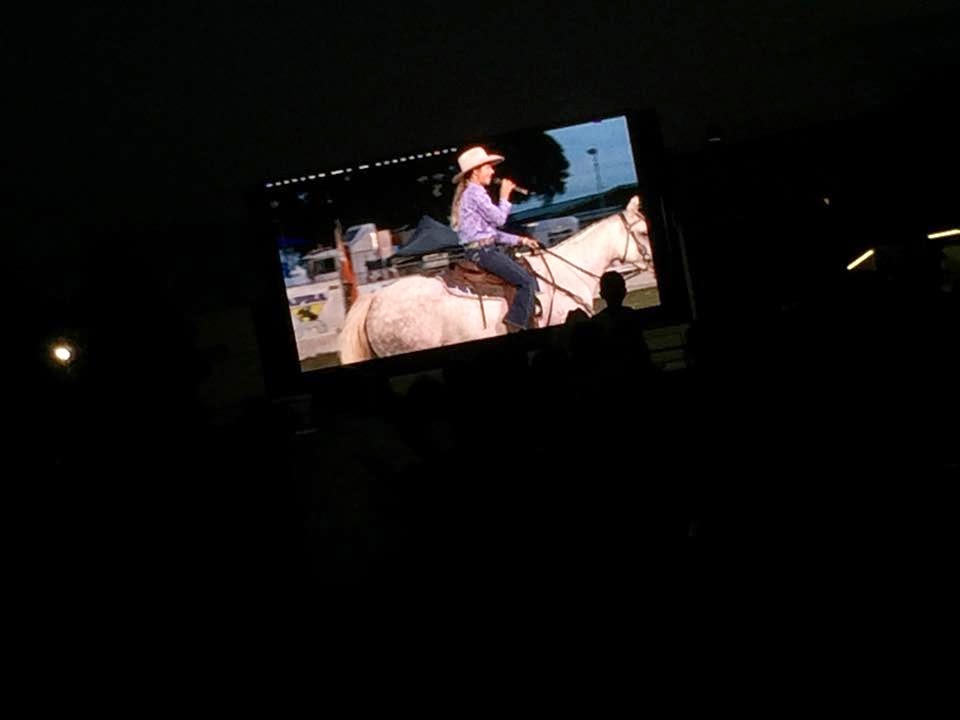 The rodeo wrapped up when we saw a nine year old cowboy get bucked really hard in the face then stomped into the ground. He didn't get up and was carried off on a stretcher while the man on the megaphone told us what a true blue champion the kid is. 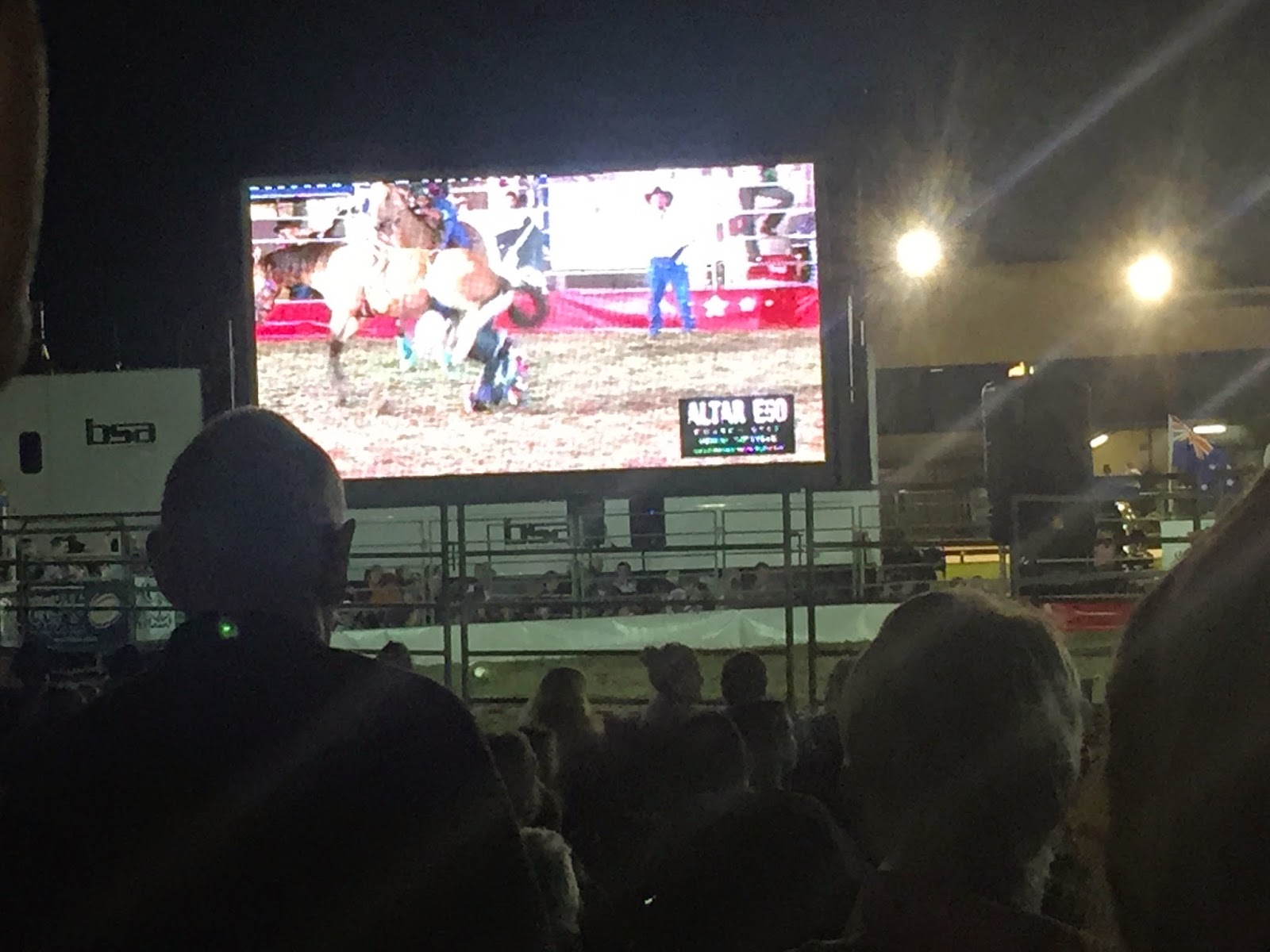 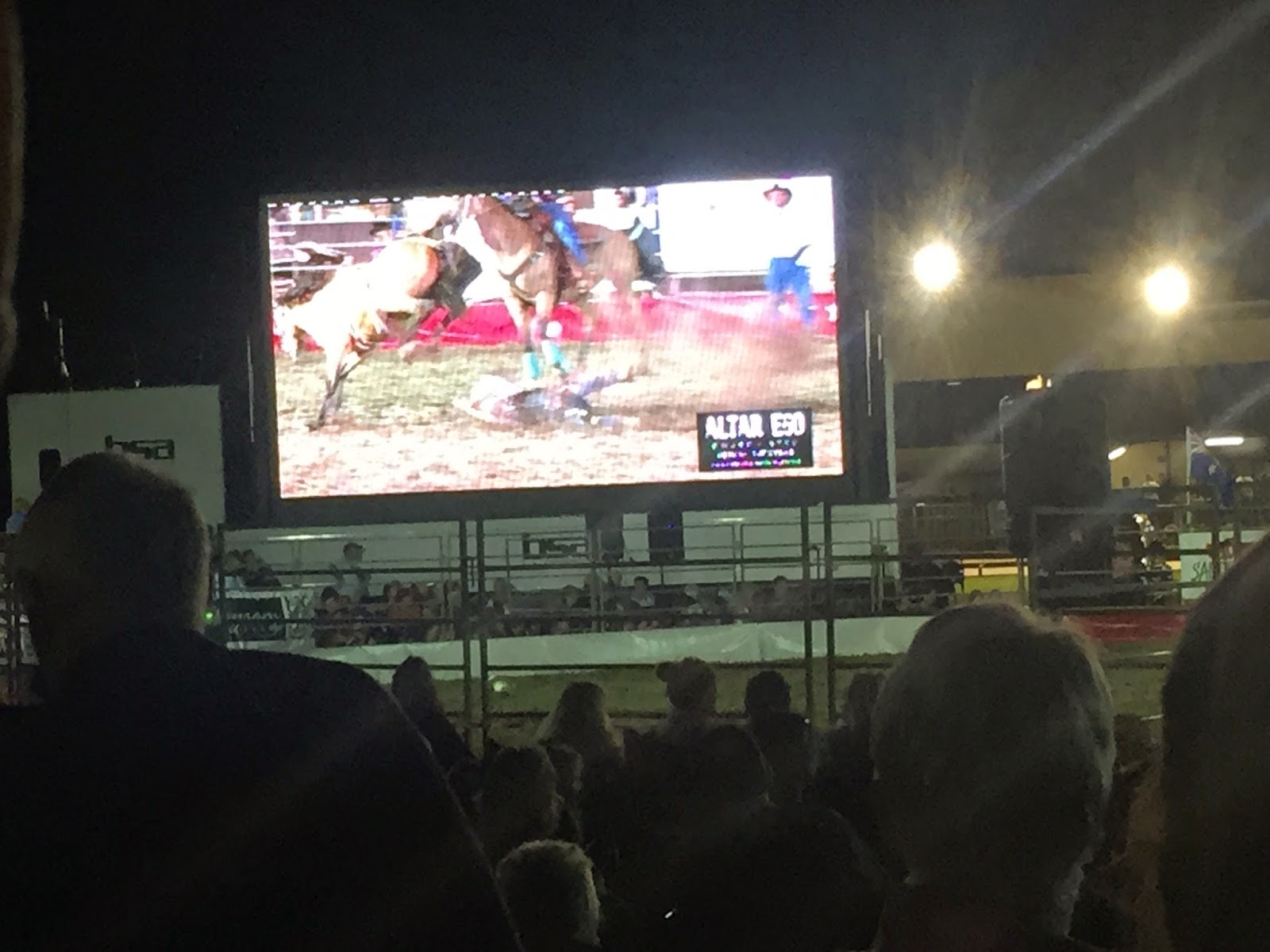 I've just realised I should probably be talking about the actual exhibition, but I might do that another time, for now I'm just trying to give you an idea of the exciting place that the show's in. Also, I'll be driving back down to Cowwarr by myself next month and doing a two week residency at the Cowwarr Art Space, so I'll be sure to take some good documentation and say more about the show then.

And so yeah, Future Now, Cowwarr Art Space until April 27, I know you probably won't be able to drive out that far and see it but I figure you might be interested in hearing about it anyway. Thanks heaps for reading, I hope you're going really good, and if anyone is giving you any grief with their big fists then try not to put yourself in a position where you might find yourself on the receiving end of a cowwarrds punch, instead my advice is to climb on your horse and go buy the biggest guns you can afford. That's what I would do, but I am after all, an urban artist.