How Michelangelow can you go?

Last week it was in the news that Michelangelo's David could be in danger of collapsing due to some micro-fractures in his ankles, it seems that the Goliath known as gravity might finally slay him down.

Some people are saying it'd be a good idea to move the 500 year old teenager out of Florence and into an area less prone to earthquakes, and sure, we could move him somewhere less groundbreaking, but I can't help feeling like no-one's yet suggested the most practical solution to supporting the Achilles heel.

David's got bad ankles right? All we gotta do is call up Michel-ankle-o and ask him to bust out the chisel and make another sculpture, this time of a walking frame. Problemo solved. Here's my artists impression of the improvement. 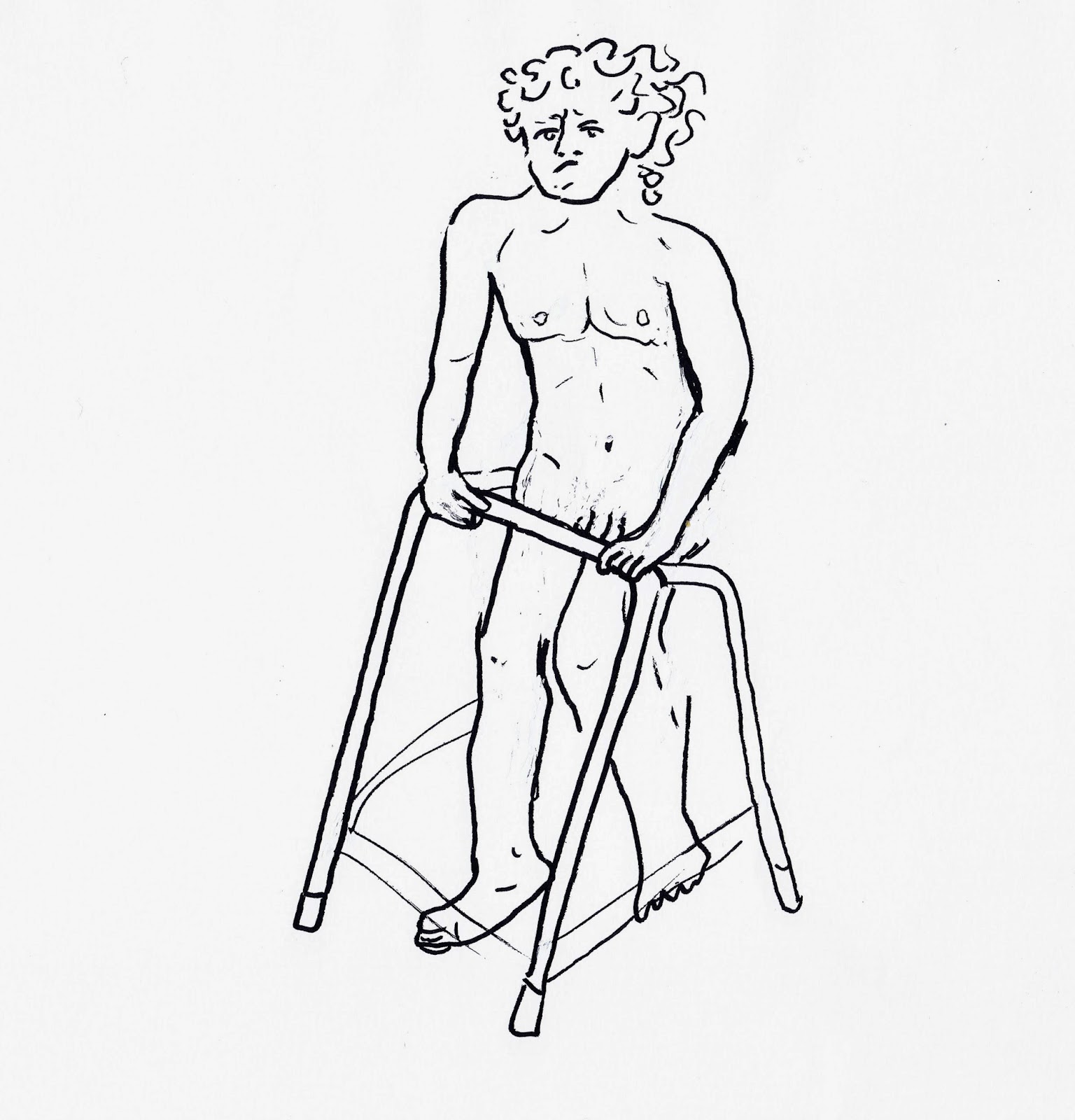 Anyway the reason this David story really stuck out to me is because at the time I read it I was having similar troubles of my own. About ten days ago I sprained my foot while training for the 33rd Puffing Billy Great Train Race.

The Puffing Billy Great Train Race is an annual event where you run 13.5km along the train line of Puffing Billy, from Belgrave to Emerald, and try and get there faster than the steam engine. I've never done any running before, but this year, as part of my "Trying new things because I'm in NEW14", I decided I would compete in the race.

The train does the 13.5km's in about 56 minutes, which is pretty darn fast, but I'm young and fit, I figured I could beat it. Just think of all the times you've been on a train that's barely moving and you think to yourself "I could run faster than this", well now was my chance to prove it.

But alas, a week out from the day I trained too hard and while running 11km on treadmill I somehow managed to hurt a ligament. I went from preparing for the biggest run I've ever done to suddenly not being able to walk from the couch to the kitchen. I was hoping it'd go away overnight, here's a shot of me in the studio, trying to get a little peas. 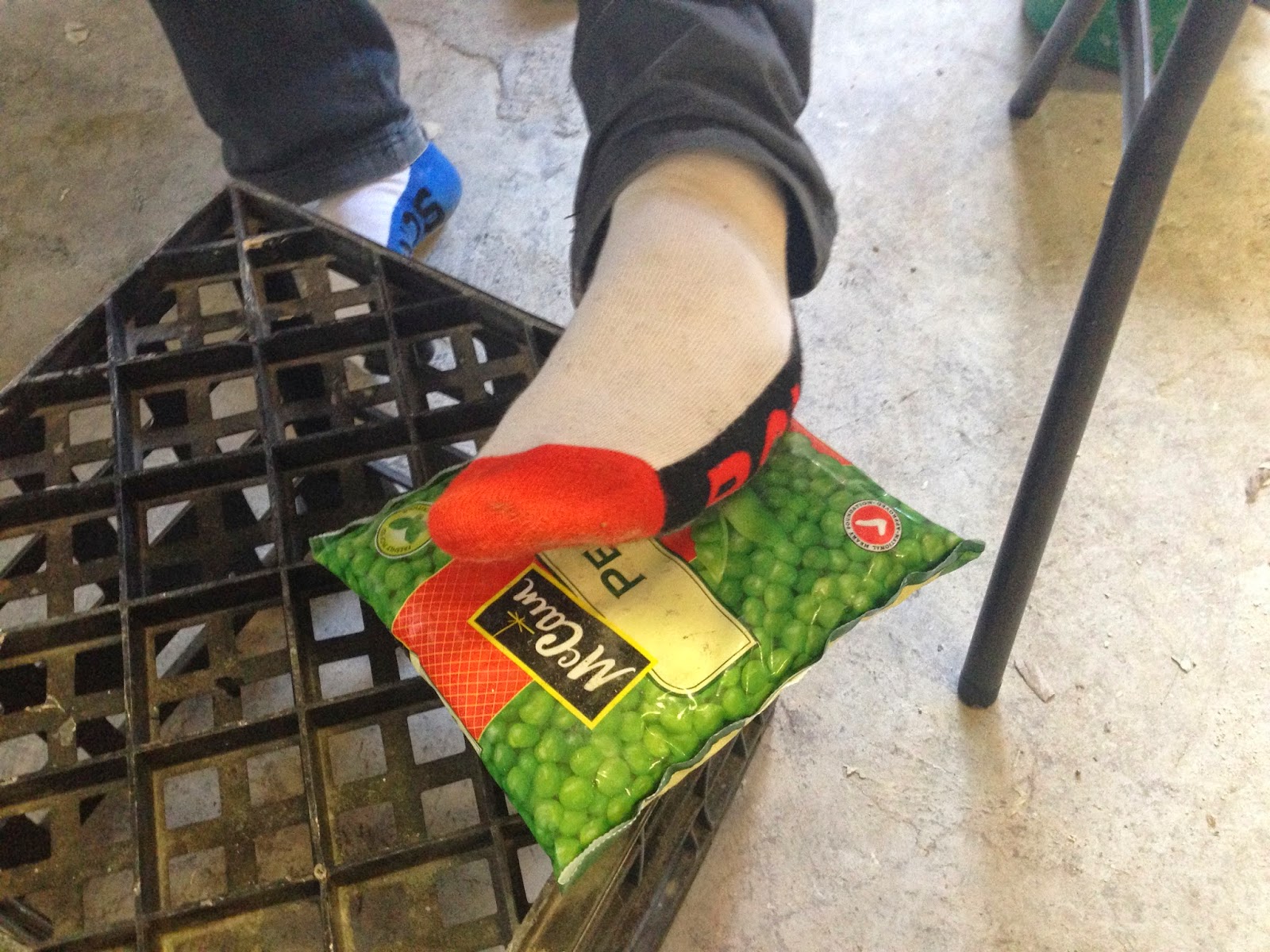 A few days passed and I still couldn't walk on it. Here's a drawing I did in the emergency room that slightly exaggerates how swollen my ankle became. 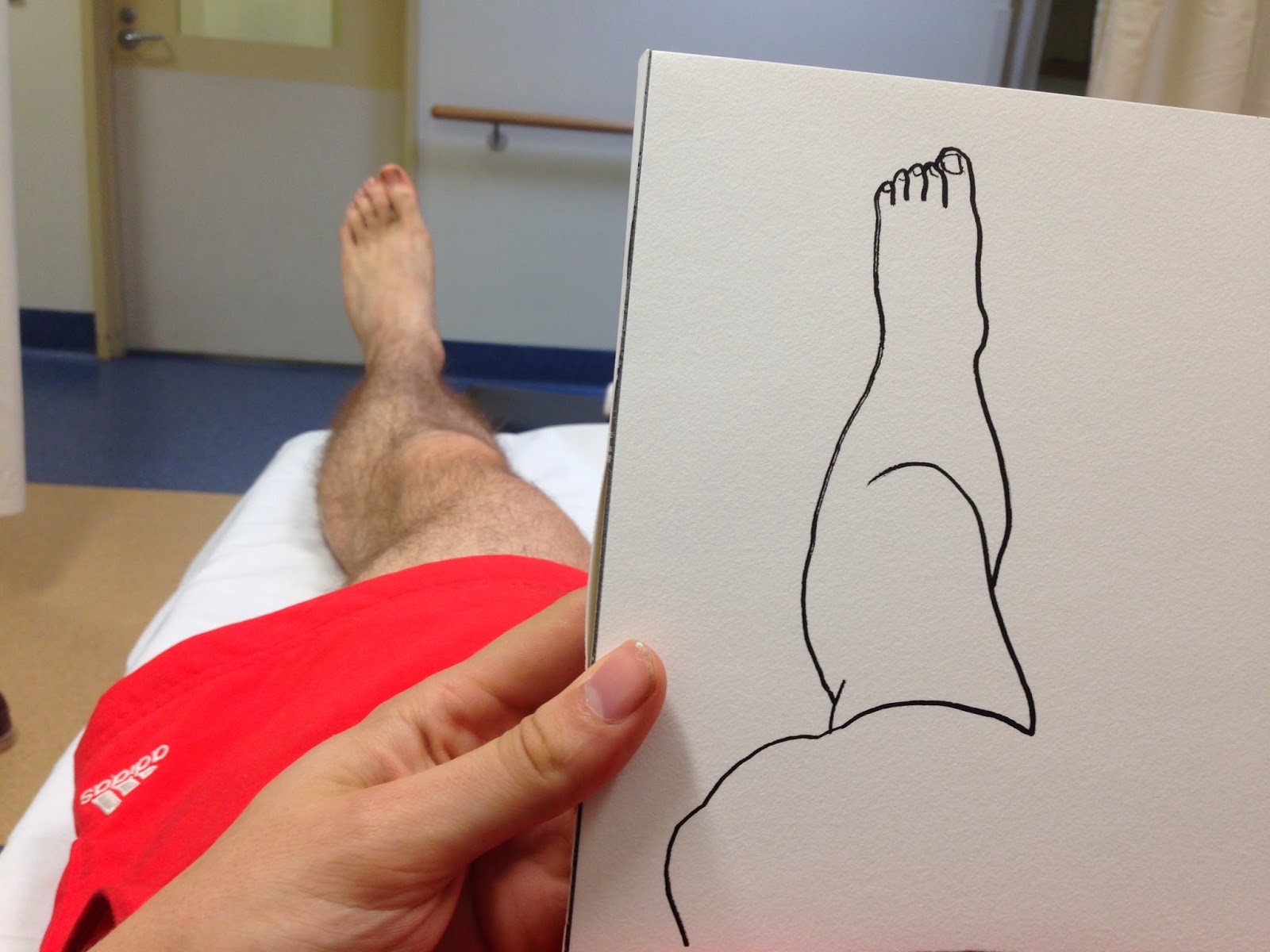 Four days out from the race I called up the Puffing Billy people and asked them if I'd be able to do the race on crutches. They said no and that the track would be too steep, wet and muddy and it wouldn't be safe, plus the maximum time limit is two hours. They offered me a full refund, but I didn't care about that, I wanted to race.

I did a bunch of googling on people who have run marathons on crutches, and people have done it, but once I actually got my crutches I realised how difficult it would be. 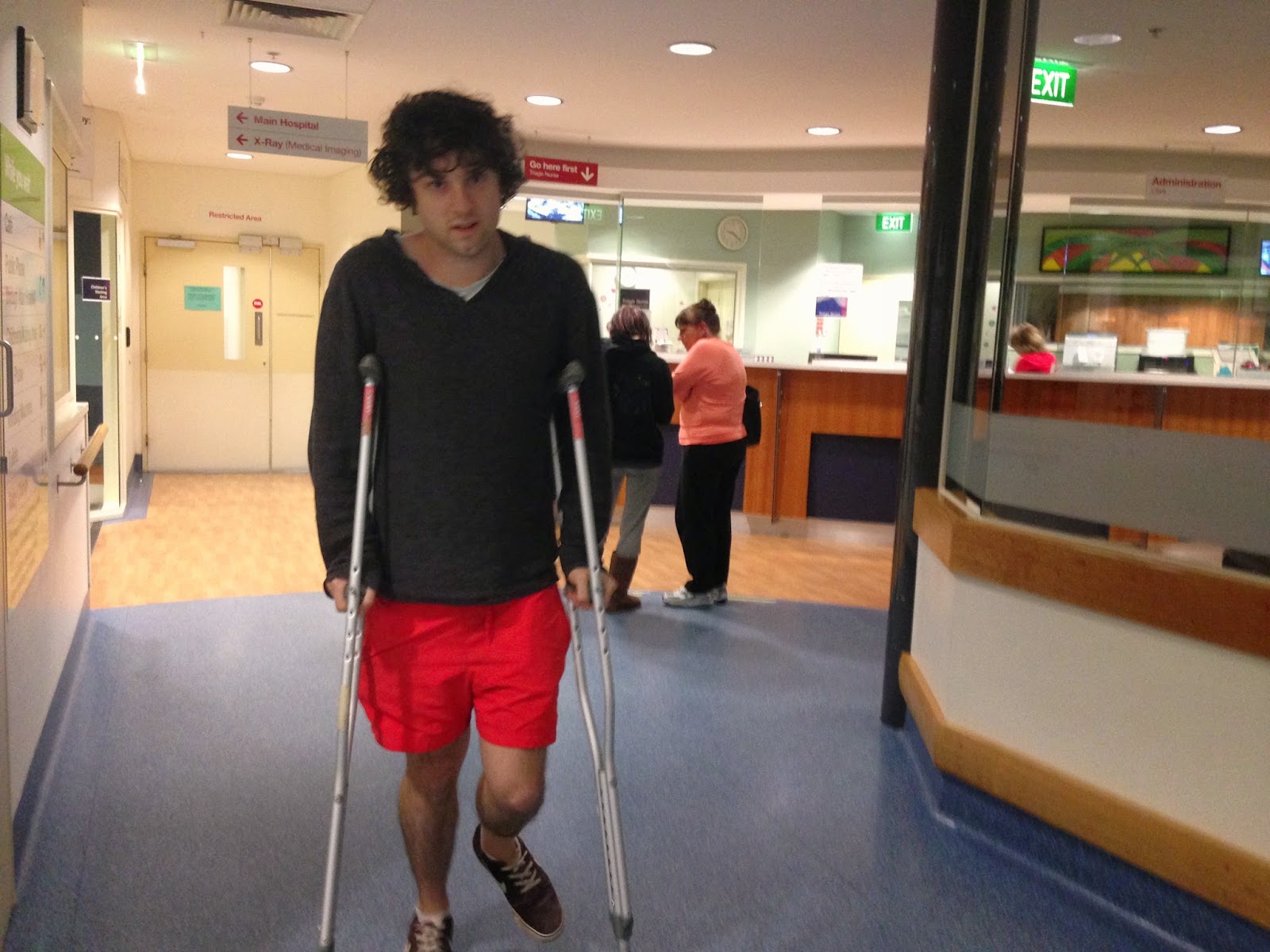 Who'd have thought that instead of the race being the next new thing I'd do, it turned out instead to be using crutches.

Getting crutches is kind of funny, I thought there'd be like a little lesson or something where the doctor shows you how they work via a little puppet show, or maybe they make you watch an old induction video, but really they just give you the crutches and say "off you go".

After three days on crutches it was race day, and despite Dad telling me how stupid I'd be to do it, I strapped up my foot and drank my Up'N'Go. The main reason I decided to go through with it is because in preparation for the race I'd started following this cheeseball running guy on twitter who posts cheeseball inspirational running quotes, and the afternoon before the race he tweeted this; 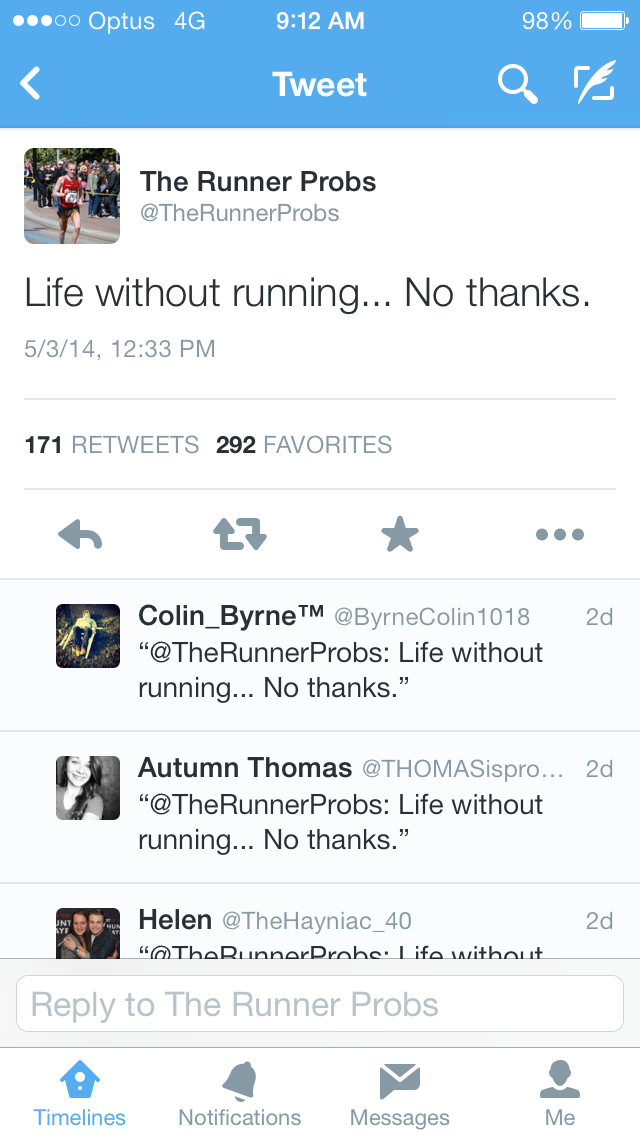 And I thought yeah, you're right Mr. weird marathon running guy, I don't want life without running either, so I decided I ought to be the greatest hero in the world and run on the sore foot. I wasn't trying to beat the train anymore, I just wanted to make it the whole distance and if possible, not come last.

So here's a shot of the 3300 other people at the starting line. 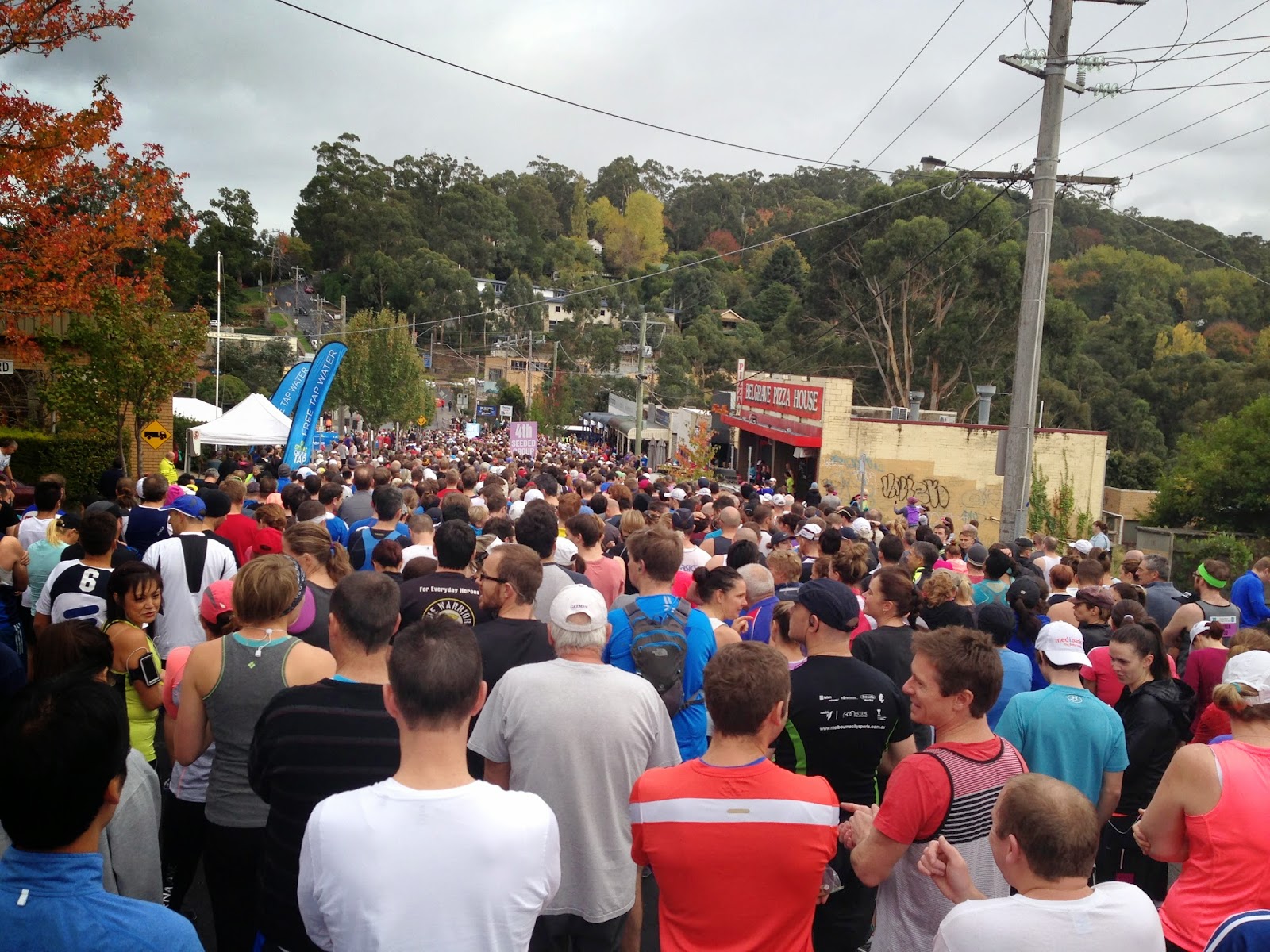 And here's me and my pal Alex, looking cool. 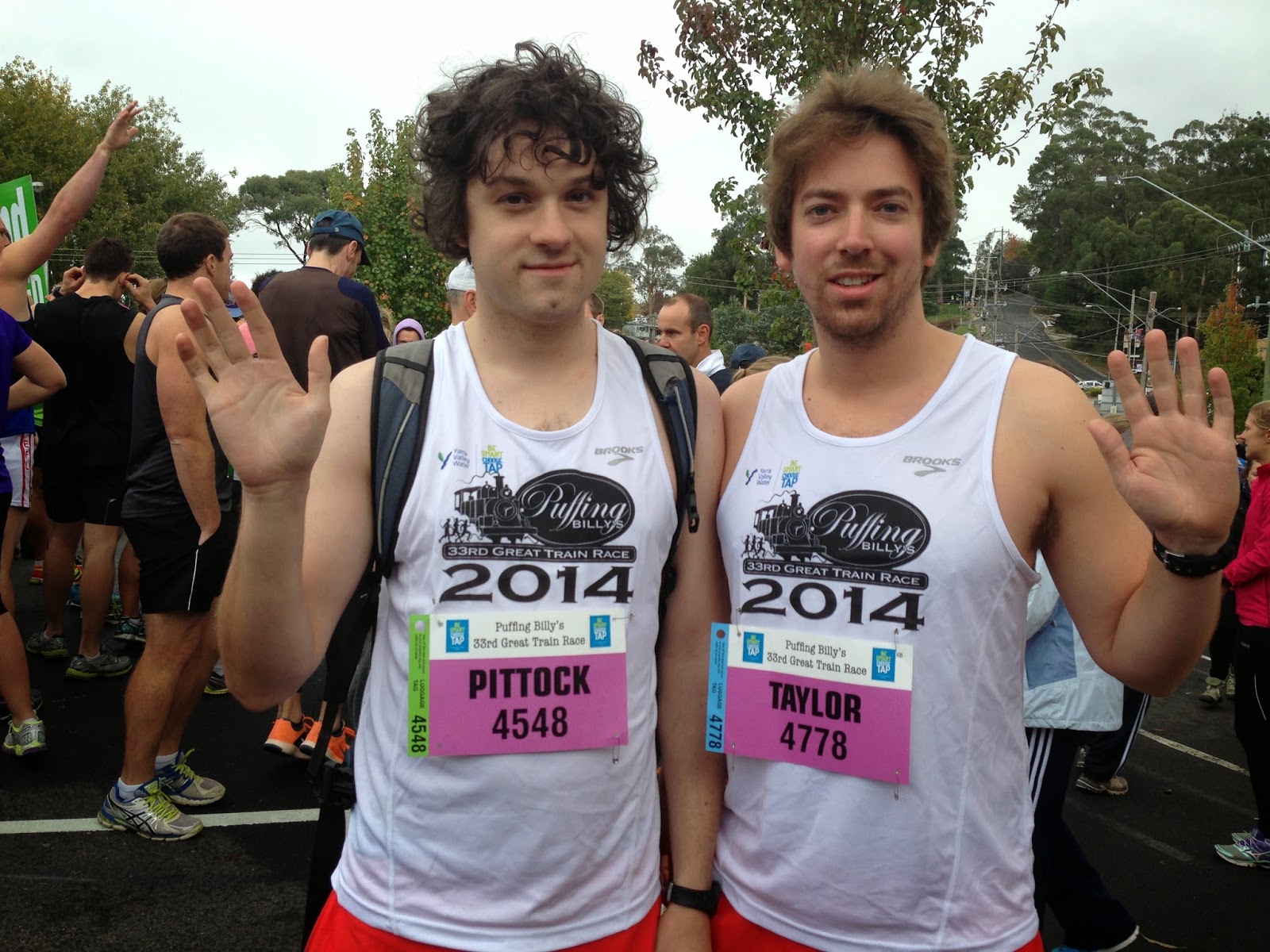 And here we again, looking slightly less cool, as I do some stretches. 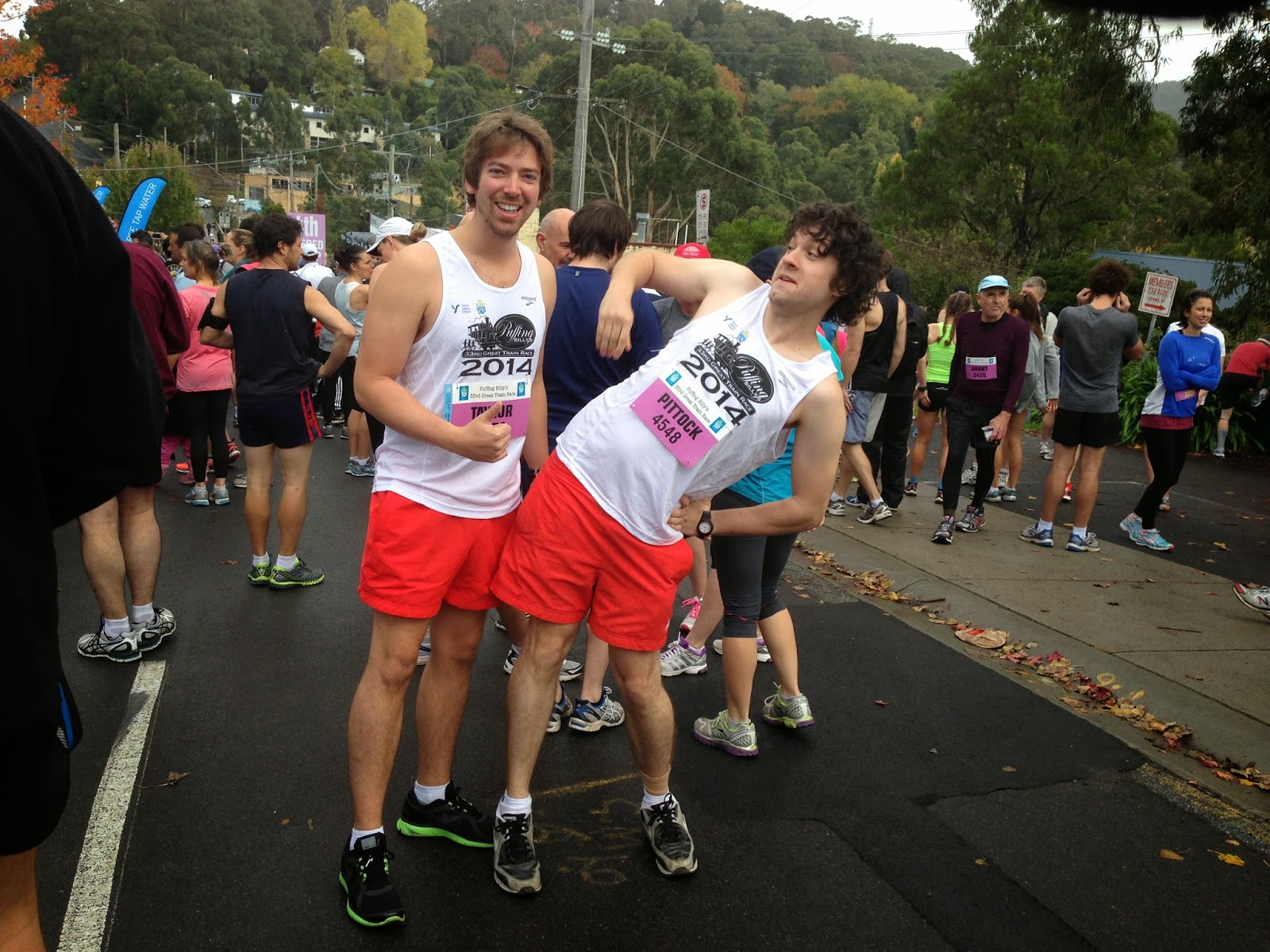 But cool or uncool, sprained or unsprained, here I am feeling like David as I race that Goliath train. 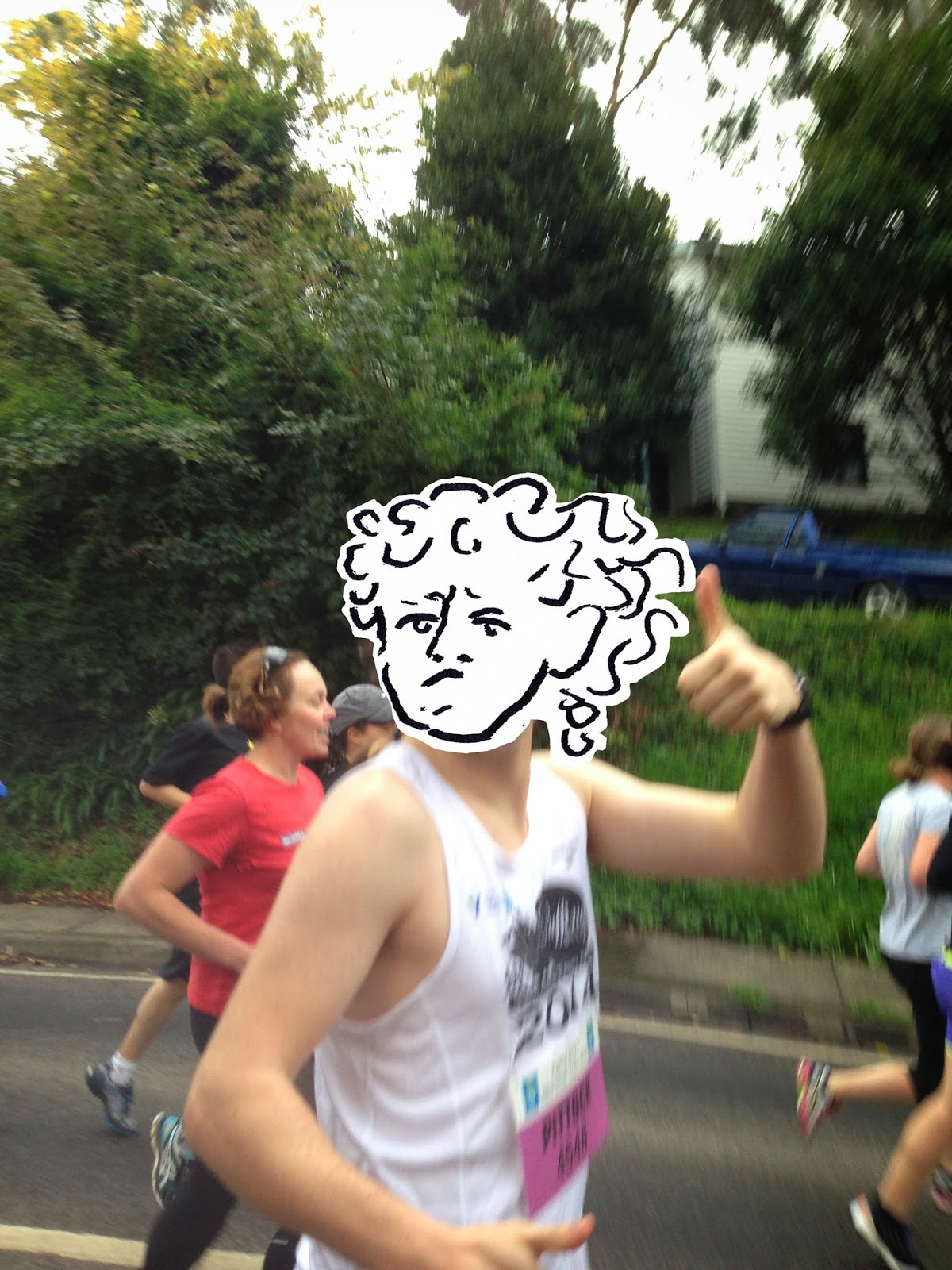 Here's some anti-McDonalds protestors we passed on the way. 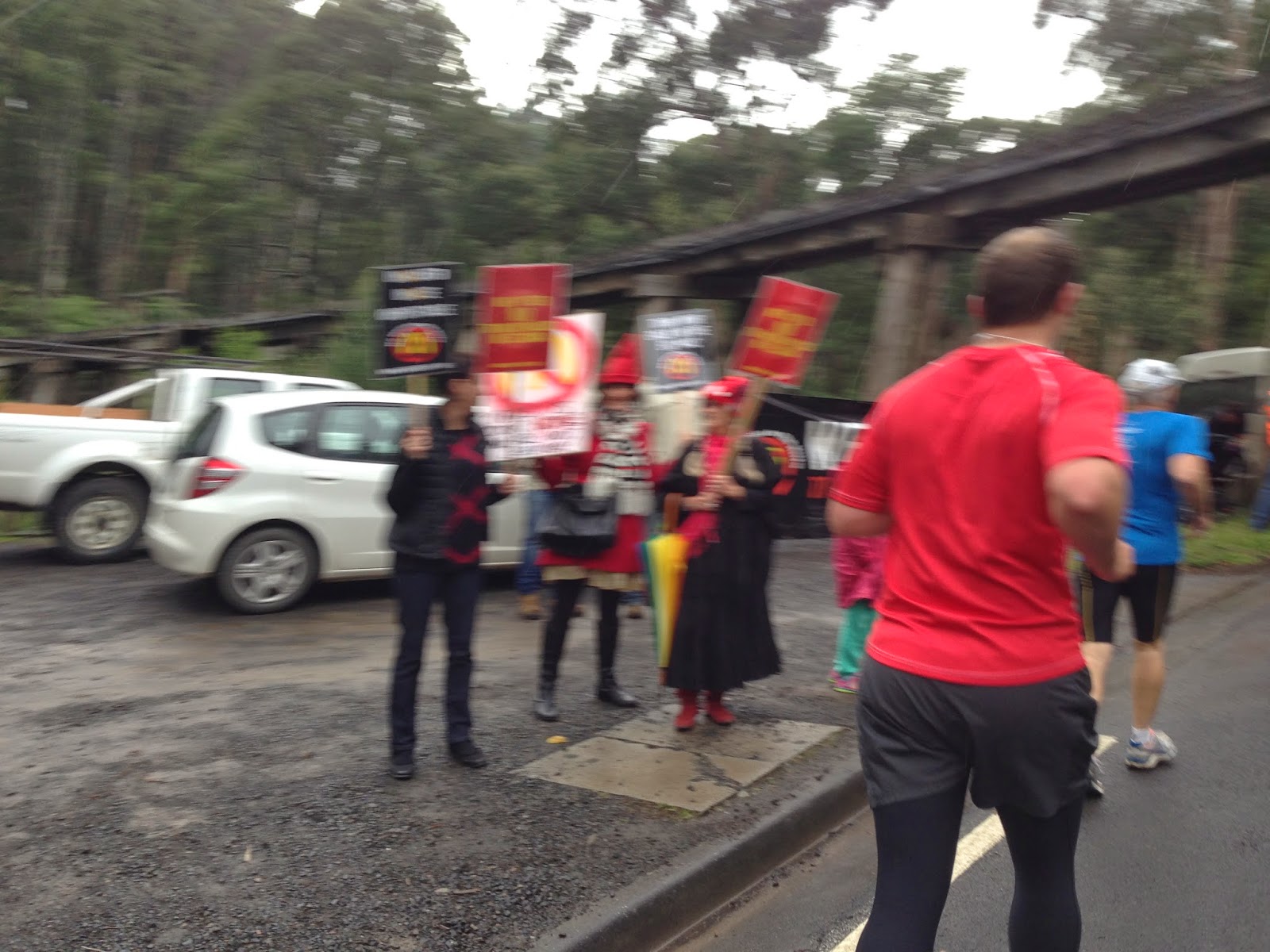 Here's some firemen with cups of water. 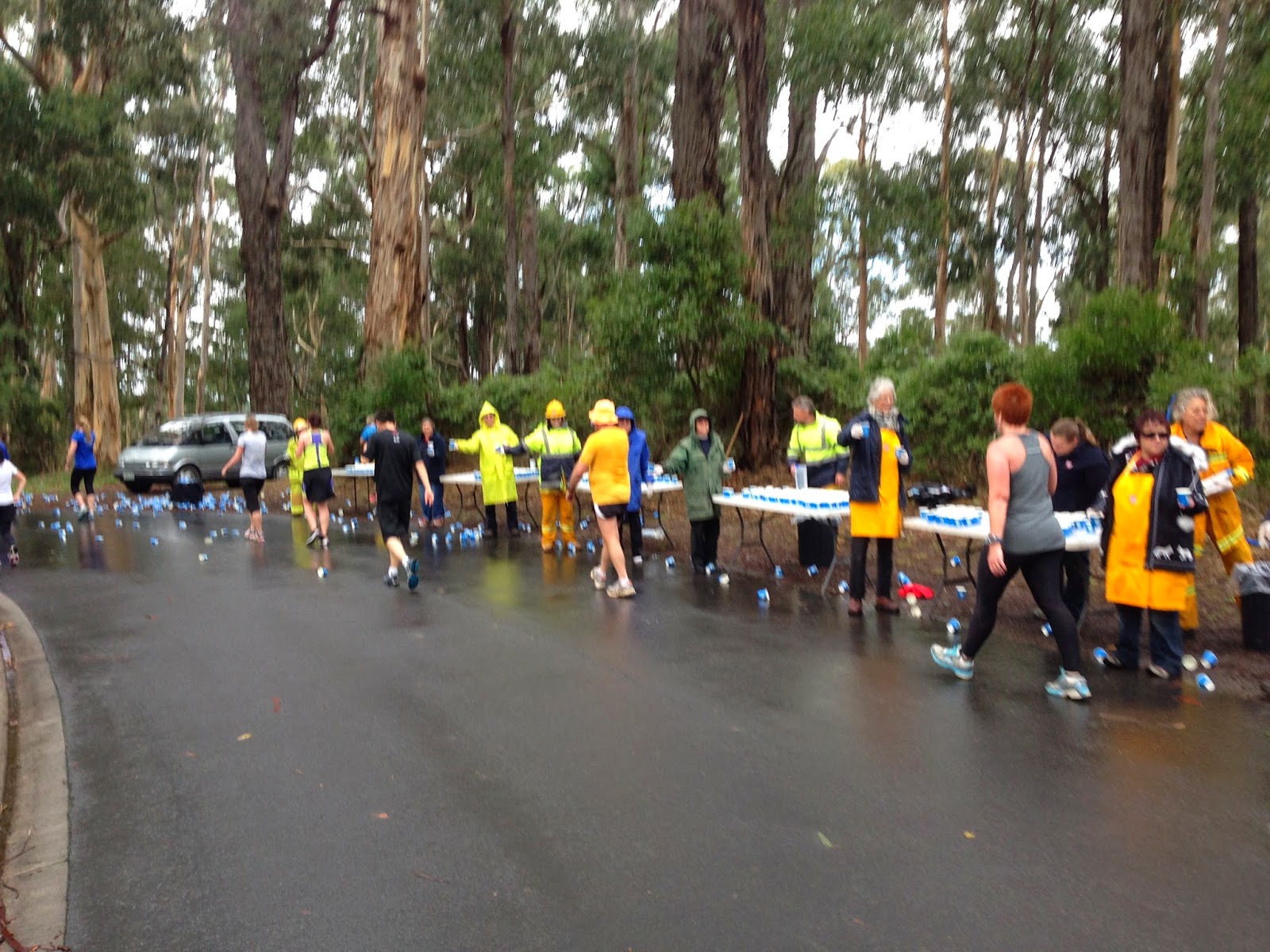 Here's a nice house that looks a bit like a Barbie dream home. 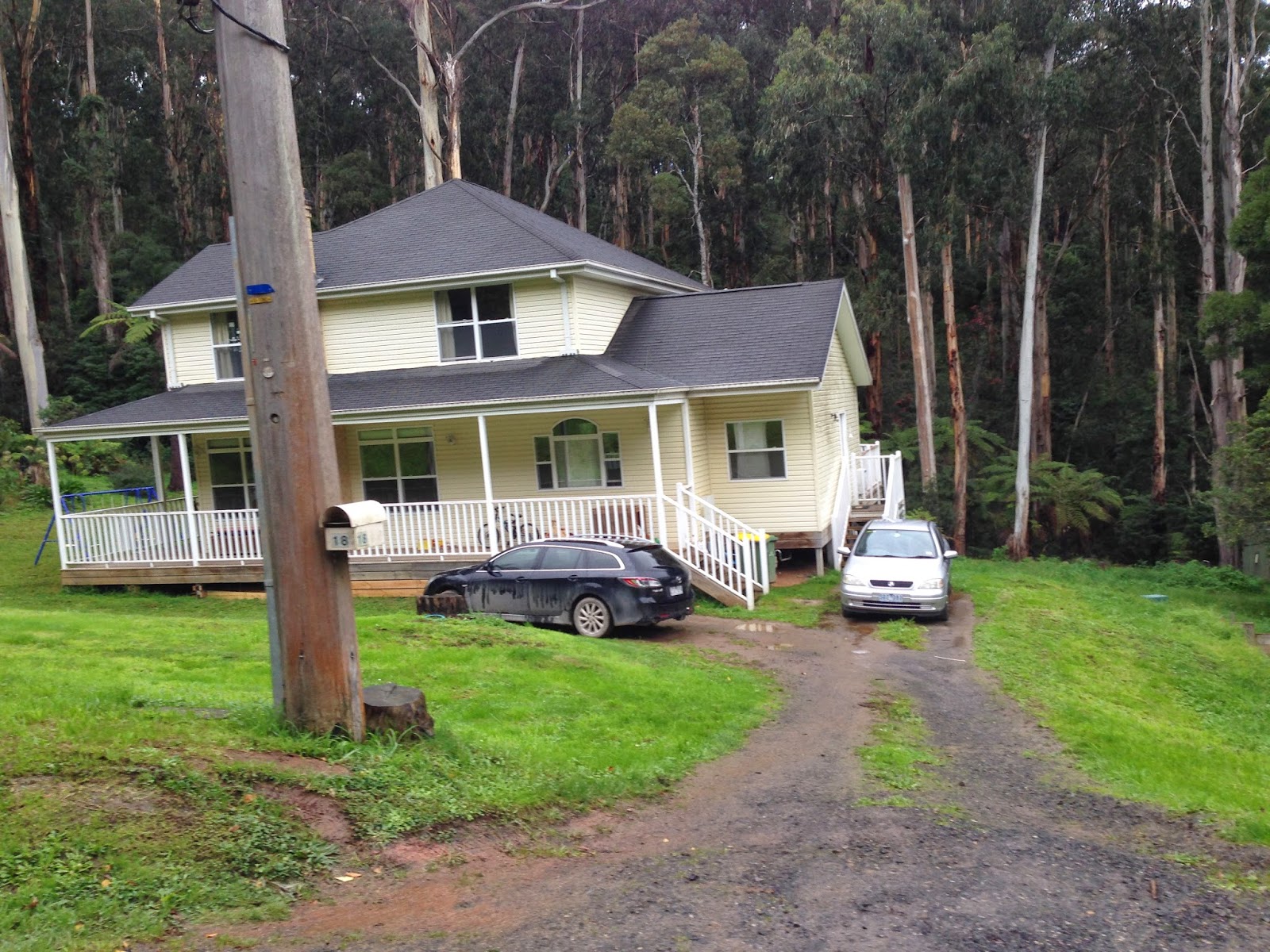 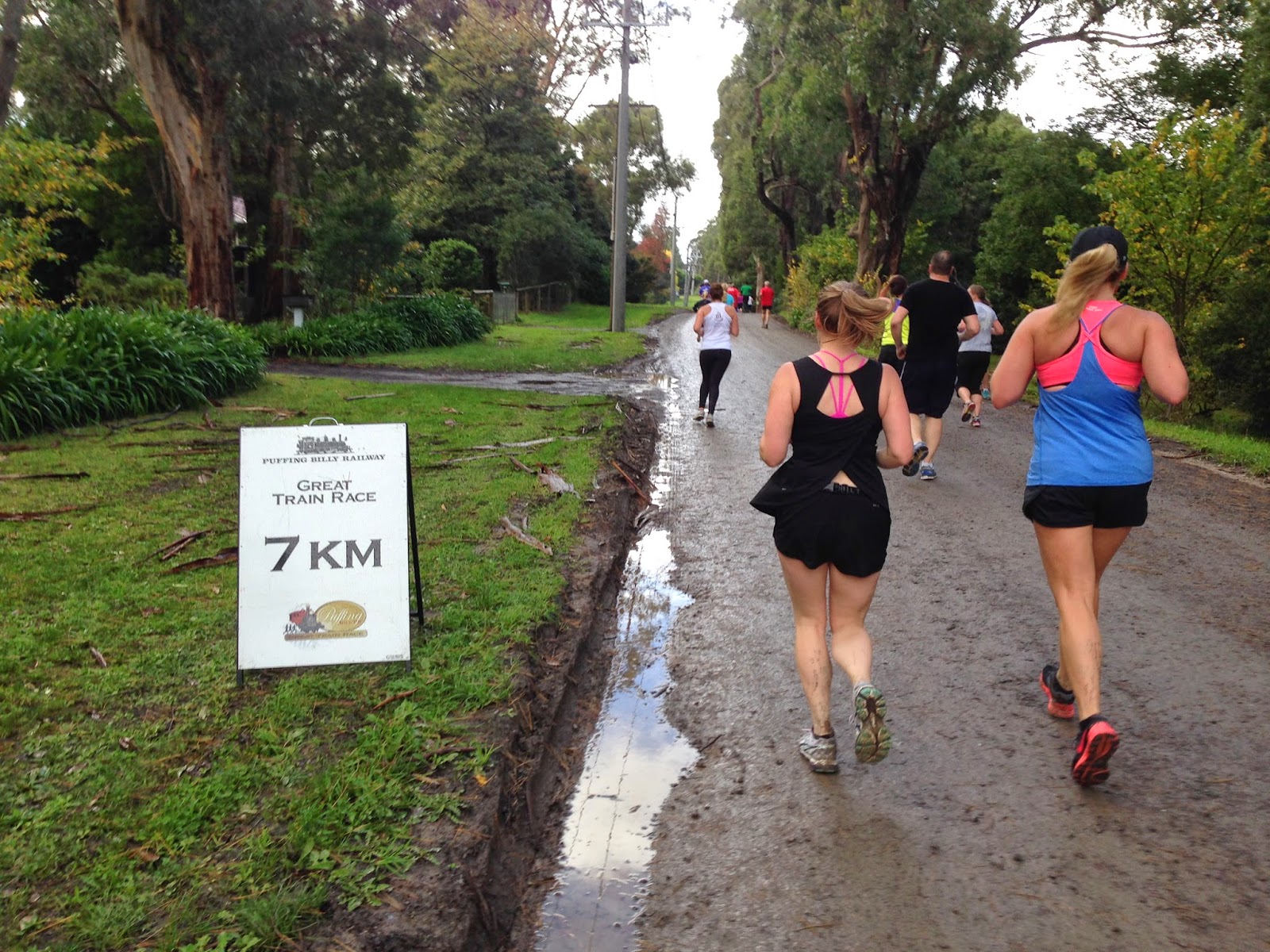 Here's Alex a second before he ducked into the bushes to relieve himself. 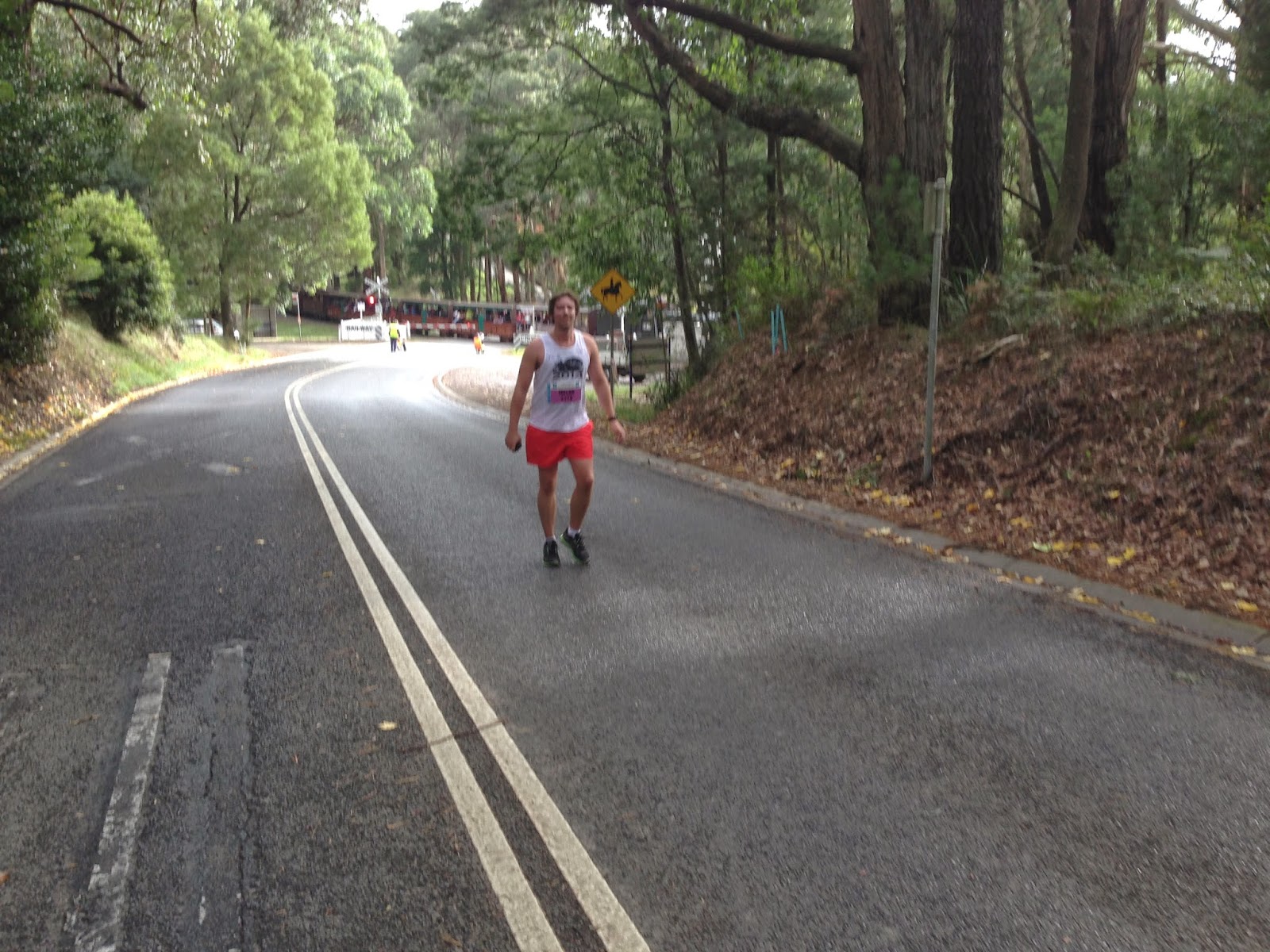 Here's Alex tying his shoe, with a person in the background gaining on him. 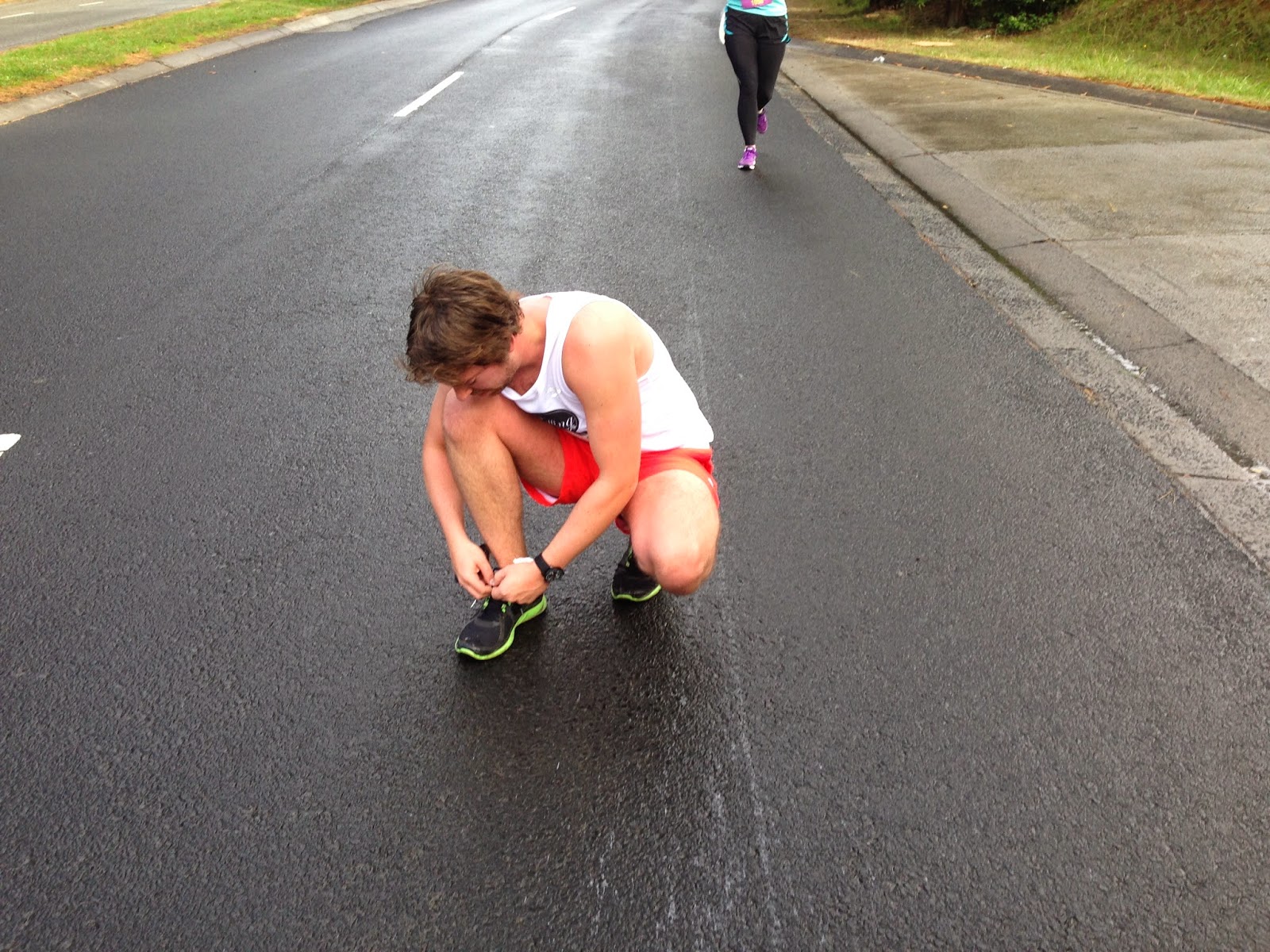 Here's Alex still tying his shoe, with the person getting closer. 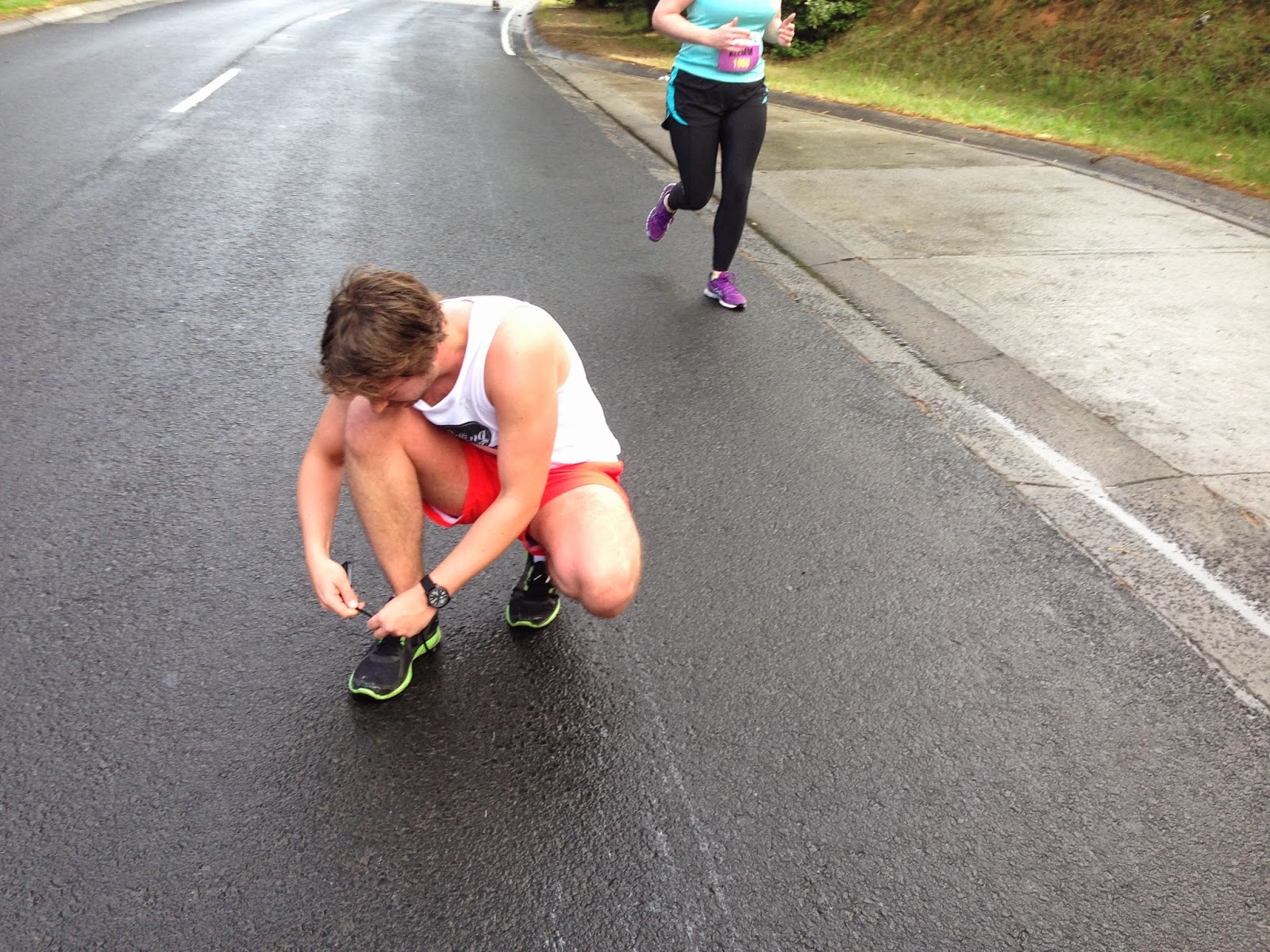 And here we are with just a km and a half to go. And finally, here we are triumphantly crossing the finish line. 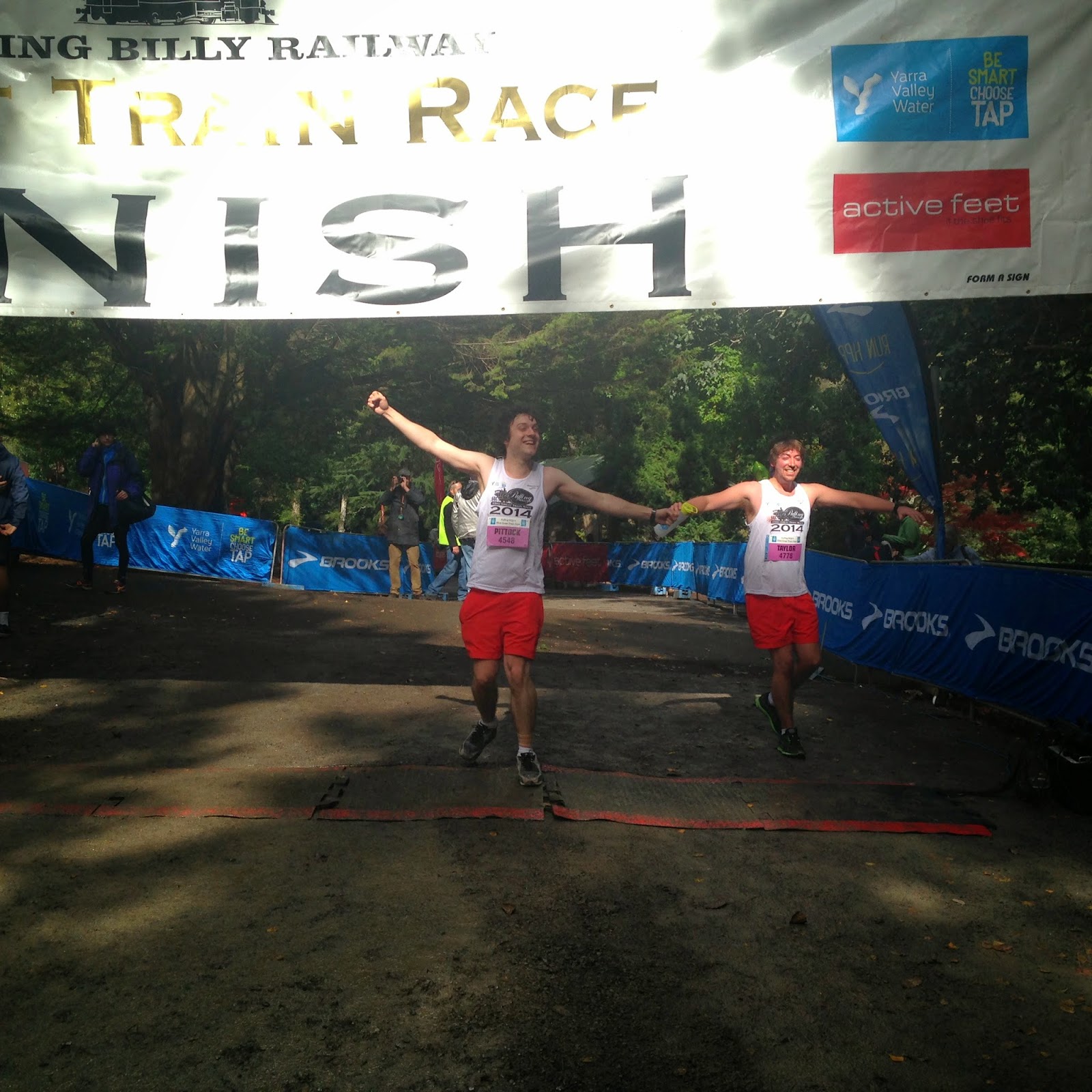 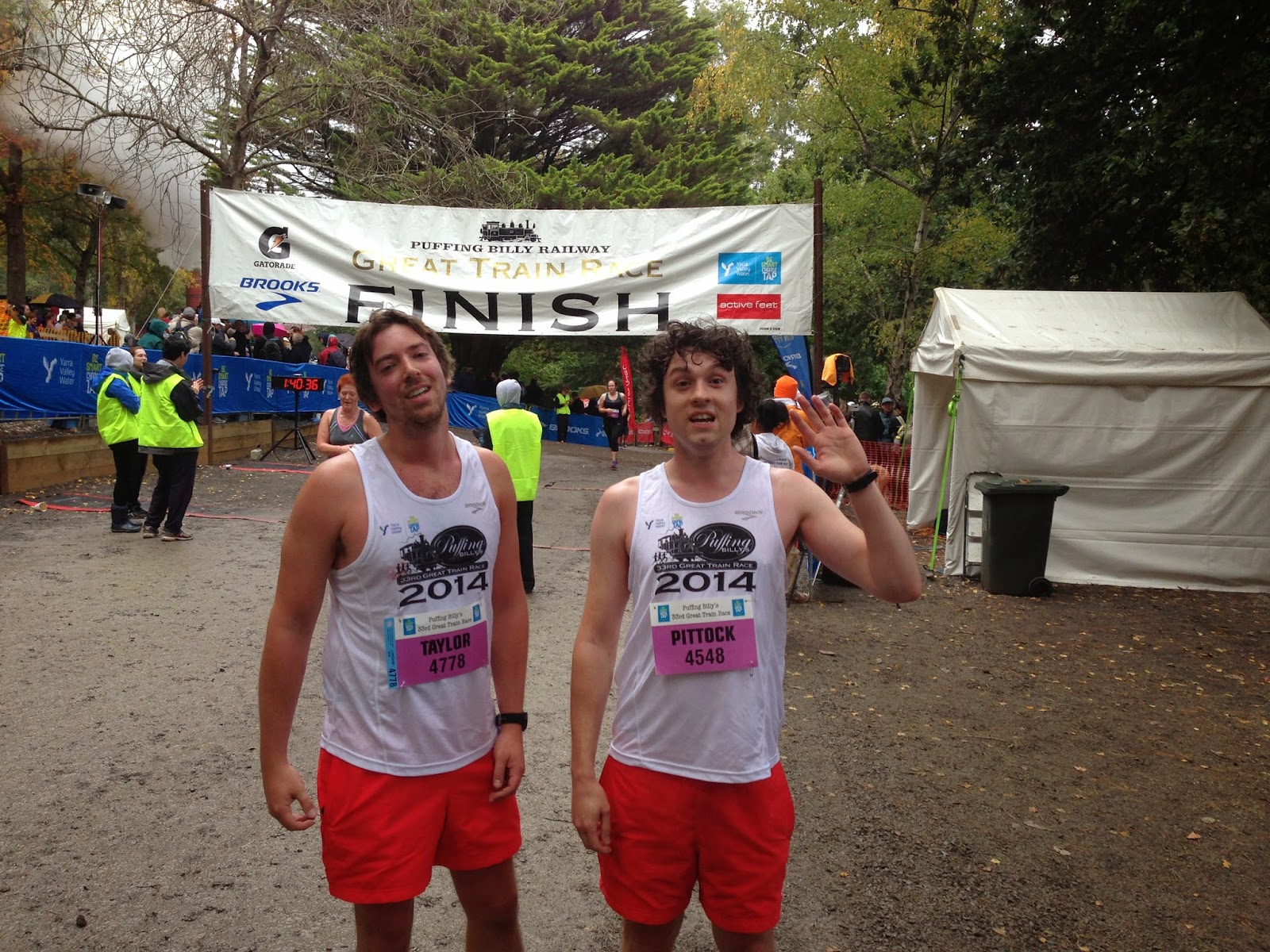 After the race you get a free leg massage. I'd never had a massage before so this was another first for me. They oil you right up and dig pretty deep. It kind of hurt, I guess it's meant to, I don't get why people like it so much, you weirdo's. 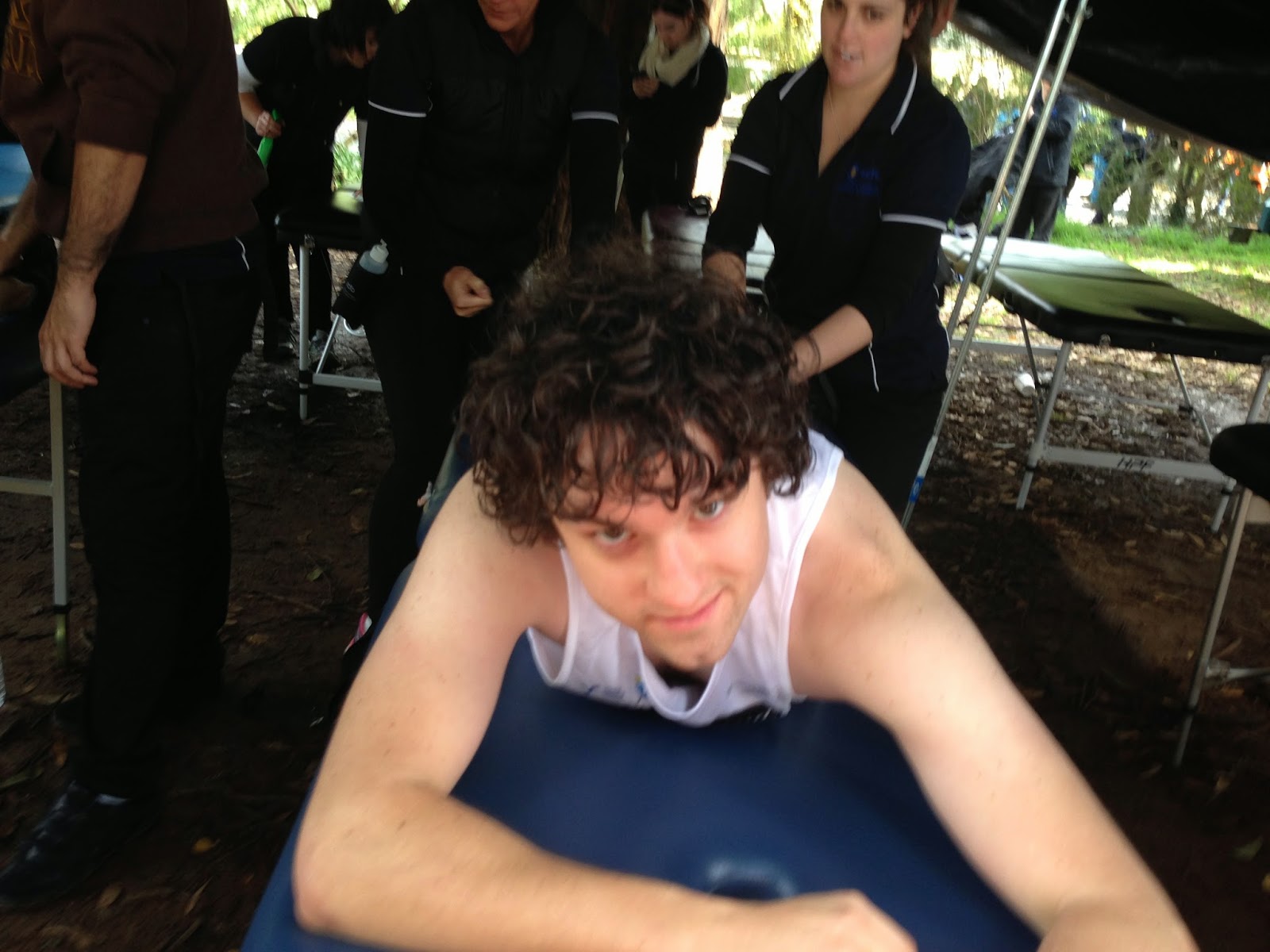 Anyway since the race I've been going easy on the foot and it's almost fully recovered, I won't be crumbling anytime soon, and neither will David once the new walking frame sculpture is built. In fact the only David that's gonna fall down ever again will be this print of him that I found earlier today on the floor of Arthur Dailey's Clearance Warehouse. 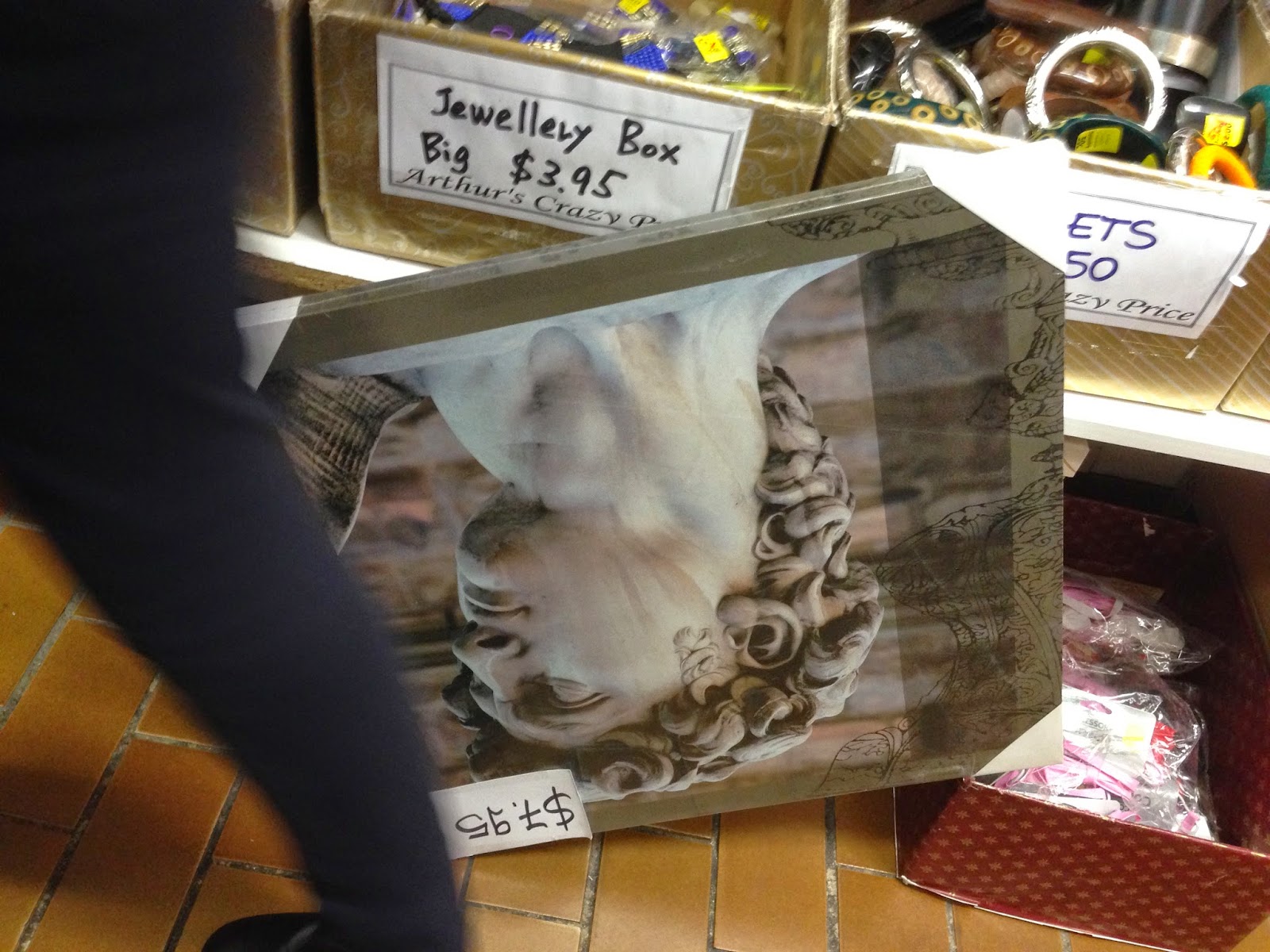 But yeah, I guess all I'm saying is try to stay grounded and not take your feet for granted, and mark my words, next year I'll race that train again and I will be writing here about how good it feels to beat it.

Oh actually before I wrap this up, one last running related thing I want to mention is that tomorrow night I'll be running a drawing class at ACCA. I ran one a few weeks ago that was just for primary and secondary school teachers and it was so much fun, here's a picture of me with Melissa Bedford from Monash University and a drawing she did of me. 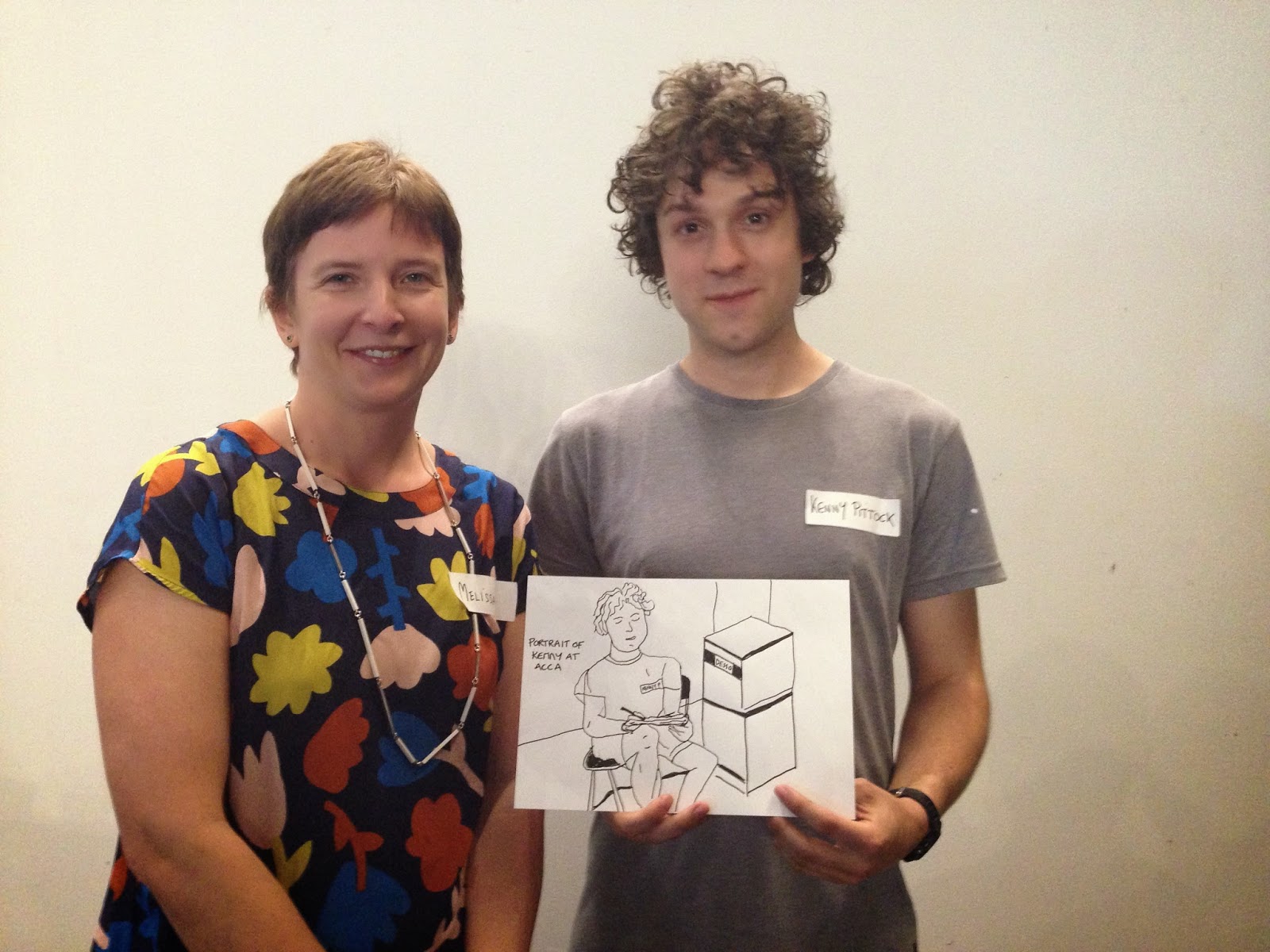 There were so many really great drawings that came out of the day, and yeah maybe in the next post I'll share some of them with you, but in the meantime this class is open to the public, tomorrow night, (Wednesday May 13), from 6-8pm. It costs $40, which includes all the art materials you can stuff into your hands and all the fancy wine you can stuff into your stomach. Or click on this sentence for the full run down of all the info about tomorrow night.

So yeah, I love doing this kind of thing. I'll try and teach you everything I know about drawing, (which admittedly might not be a lot), and even if you don't learn anything I can still promise it'll be a lot of fun. Anyway, thanks heaps for reading and hopefully we'll run into each other sometime soon!
Posted by Kenny Pittock