I bought a t-shirt and I regret it

Two days ago I went to the Synchrotron open day. A synchrotron is a massive particle accelerator that uses magnets to propel high-energy electrons around and around a huge circular tunnel. Apparently the electrons move at a speed "equivalent to something going around the Earth seven times in a second", and when the electrons travel in an orbit that fast it releases intense radiation and creates a light "about a million times brighter than our sun". Much of the light the synchrotron makes is outside a humans visible spectrum, like infrared and X-rays.

The synchrotron is basically just a huge scientific tool the size of the MCG that scientists and researchers can pay to use. Once at full power the synchrotron light is then bent and transferred into individual beam line stations, where it is used for conducting experiments. The Synchrotron in Clayton, the only one in Australia, has nine beam line stations, each differently designed and used for different purposes. When a sample material has the synchrotrons intensity of light directed at it its innermost structures become revealed. They use this technology for all sorts of things including making plants more productive, improving the success rate of IVF procedures and making metals more resilient. What it's most known though for is it's research into tackling diseases. The big one everyone kept saying at the open day is cancer research.

I don't understand a lot of what goes on at the synchrotron but the little i do understand is amazing. Despite all the ridiculous science going on though, most of it going on over my head, one thing that really caught my attention was a pair of live 3d TVs they had set up on demonstration streaming to each other on either sides of the building. They use these 3d cameras because many of the research facilities at the synchrotron have harmful chemicals and radiation and so the work must be conducted using robots, and the people outside of the room controlling the robots need to have a good understanding of where the robots are spatially. I think that's right.

I'd never seen live 3d cameras before and they're really cool. "Oh yeah, they used to be a lot bigger and much more expensive too" a guy who worked there told me. "They're actually pretty cheap now; this one was only $30,000... You know, cheap is a relative word".
I'd love to see what I could make with one, maybe one day. It seems inevitable that it really won't be very long at all before we're seeing in 3d on things like Skype and video calls. Hopefully we won't still need to wear the glasses for much longer… or maybe the 3d glasses will become like an 'in' thing, like how people with good vision sometimes get around wearing frames with regular glass lenses because they feel more attractive in them. Maybe they'll release 3d glasses in a whole range of different colors and styles, and Oakley and Ray Ban will swamp the media with competing advertisements trying to capture the 3d glasses market. Maybe.

Anyway, I had a very good time at the Synchrotron open day, but that's not the point of this at all; the only thing I really wanted to talk about here is my new blue (medium) t-shirt that I bought for $10 on the way out of the open day. It was an impulse thing I grabbed because it seemed cheap enough and I was really excited about science. I thought the t-shirt said "Electron" on it, which I thought was great, but now I’m home looking at it it clearly says "Elect ron", with a gap between the t and the r. I suspose it's a pun on the Napoleon Dynamite "vote for Pedro" tshirts, which is ok I guess, but I’d have rather it just said "electron".

The worst part though is it's way too tight around the neck. I’m used to a much looser fit. There was no “trying on” opportunity, and I guess that’s what you get for ten dollars. I could sort of stretch it I suppose, pull at the collar, break it in a bit. Maybe if I put it through the wash. But it's new, I shouldn't have to do that. Maybe it could be a gift, no, who would want it? I’m stuck with it.  I guess I could think of it as a $10 donation to the Synchrotron, after all I did get a couple of free Synchrotron frisbees. But they're not really very good frisbees either.

Maybe I should just write the whole thing off. Forget about the ten dollars and give the shirt to an op shop? That's what I’d usually do. No, not this time.
It's too uncomfortable to use as a painting shirt, but I guess it's ok to be uncomfortable at the supermarket or going to the library.
I guess what it comes down to is how many times do I have to wear this thing before I can feel like I’ve gotten my ten dollars worth?
Two or three times? I don't even want to wear it once though. five? Ten times? That would make it a dollar a wear. Even that seems expensive compared to a couple of my tshirts that probably cost a couple of cents a wear.
No, a dollar a wear is good enough. So ok, maybe I’ll try and wear the awful thing ten times in the next month, before the end of 2011.
That'll be the goal, it's settled.
So I guess I’ll let you know when I do. Ha, something to look forward to.

Uh, this is really really dull isn't it? And I’ve written way too much.
You probably don't care about the Synchrotron, and you definitely don't care about this tshirt that I shouldn’t have bought. But I don’t know, I mean sure I guess I could talk about art, but I’d much rather talk about this.
Ha, maybe I’m just not cut out for blogging. Maybe I should’ve used the time I spent writing this developing my own 3d glasses company. Or maybe I should’ve used the time legally changing my name to Ron and looking into how to run for Prime Minister, since I’ve now got just the t-shirt to wear while campaigning. 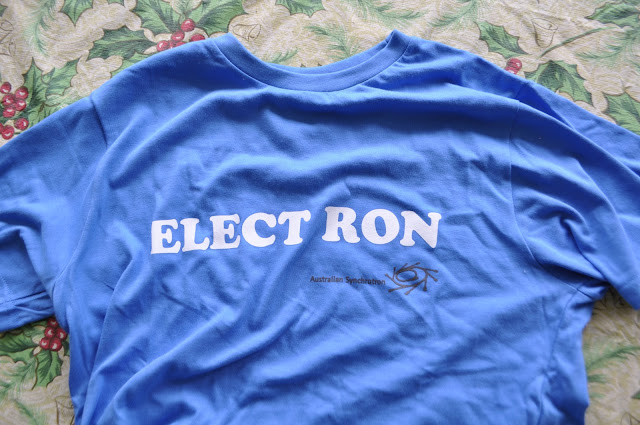 You've probably read that twice now as I already wrote it in the bit up the top.

I'd say "nice to meet you", maybe even talk a little about myself, but that's probably not necessary as I'm sure I've already met the few people who might read this.

I can't decide if I want to blog. Be another dumb blogger. I don't think I do. I was always against it. I get paranoid about putting things on the internet.

Lately though I've been thinking maybe I should try and get over it, and you know, try and have just a little taste of that yummy internet presence everybody seems to be licking.

So I'll just see how this goes. I like to think I'm a scientist so I'll treat this as an experiment. I'll see if it feels right or not. I don't know yet, but thank you for reading anyway.

I guess that's enough for now. I hope this "post" wasn't too much of a snoozeville, but at least now this blog has some words on it.

Should I include an image on this first blog post? No, not yet, I don't want to peak too soon.

So here I am, on the internet. Hi.
Posted by kennypittock No comments: