A simple Twistie of fate 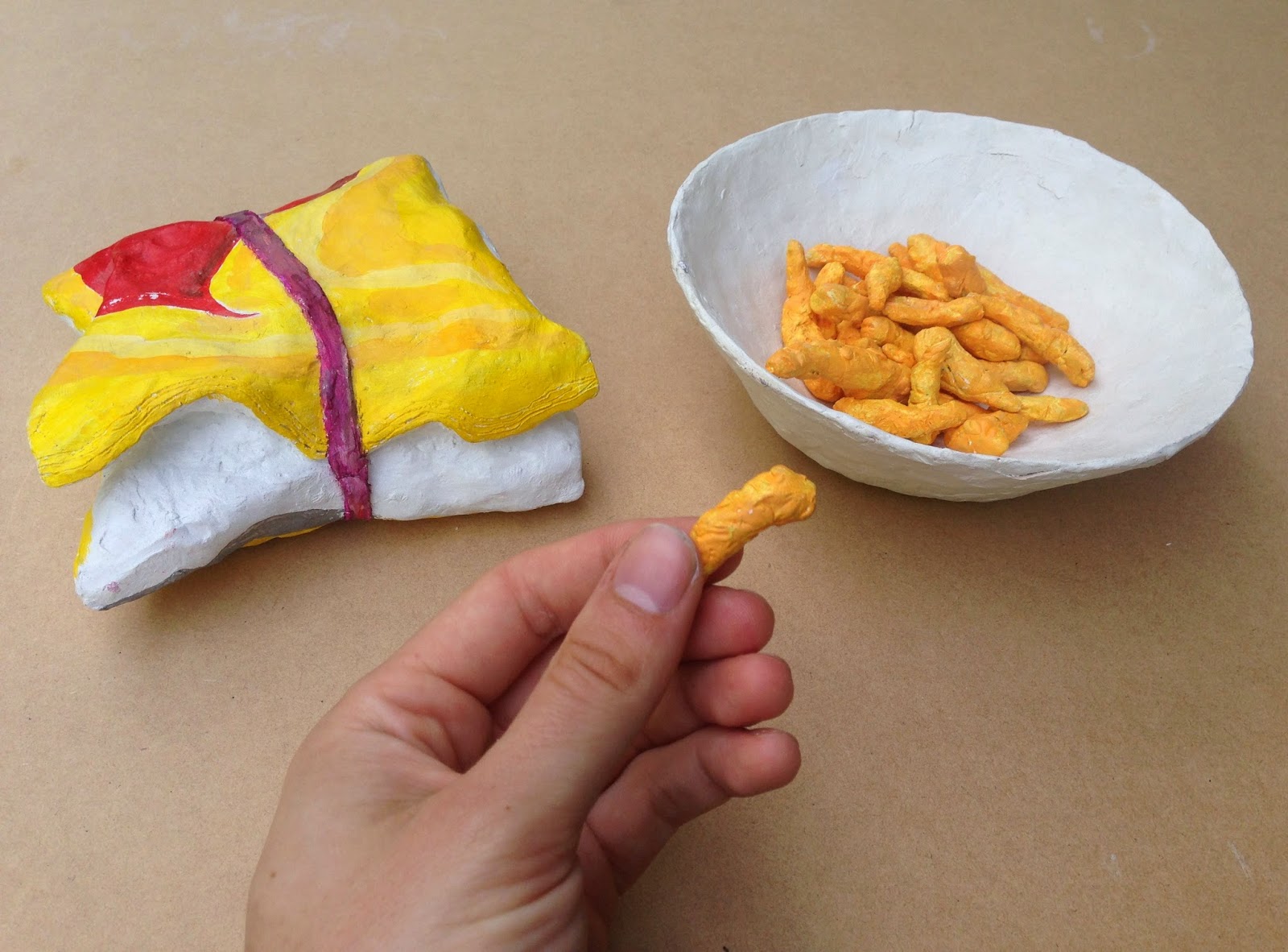 Here's the same set of sculptures but this time I've twisted it around and taken the photo from the opposite side. 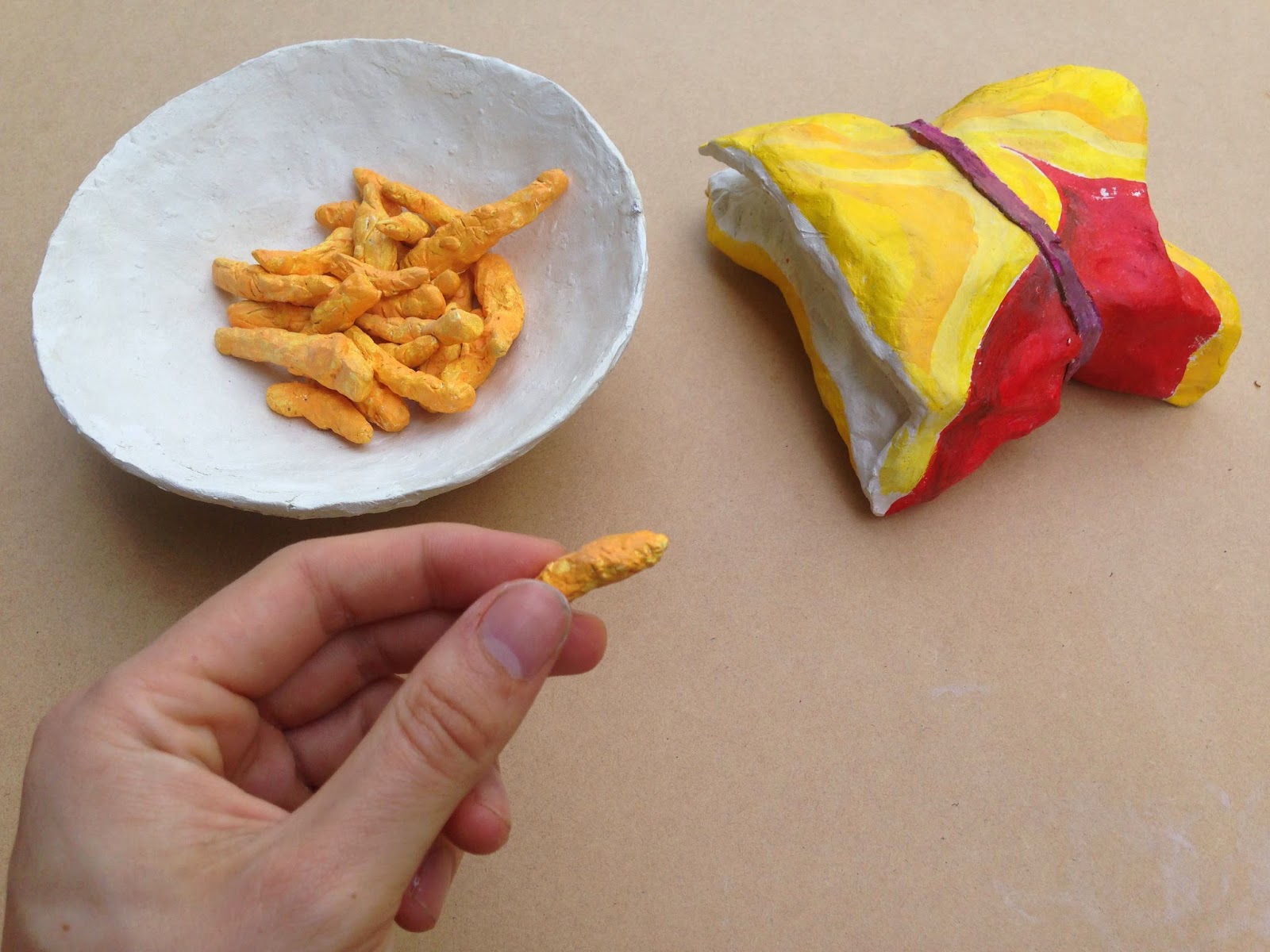 And here's the same photo again, but this time I twisted it around just a little bit more. 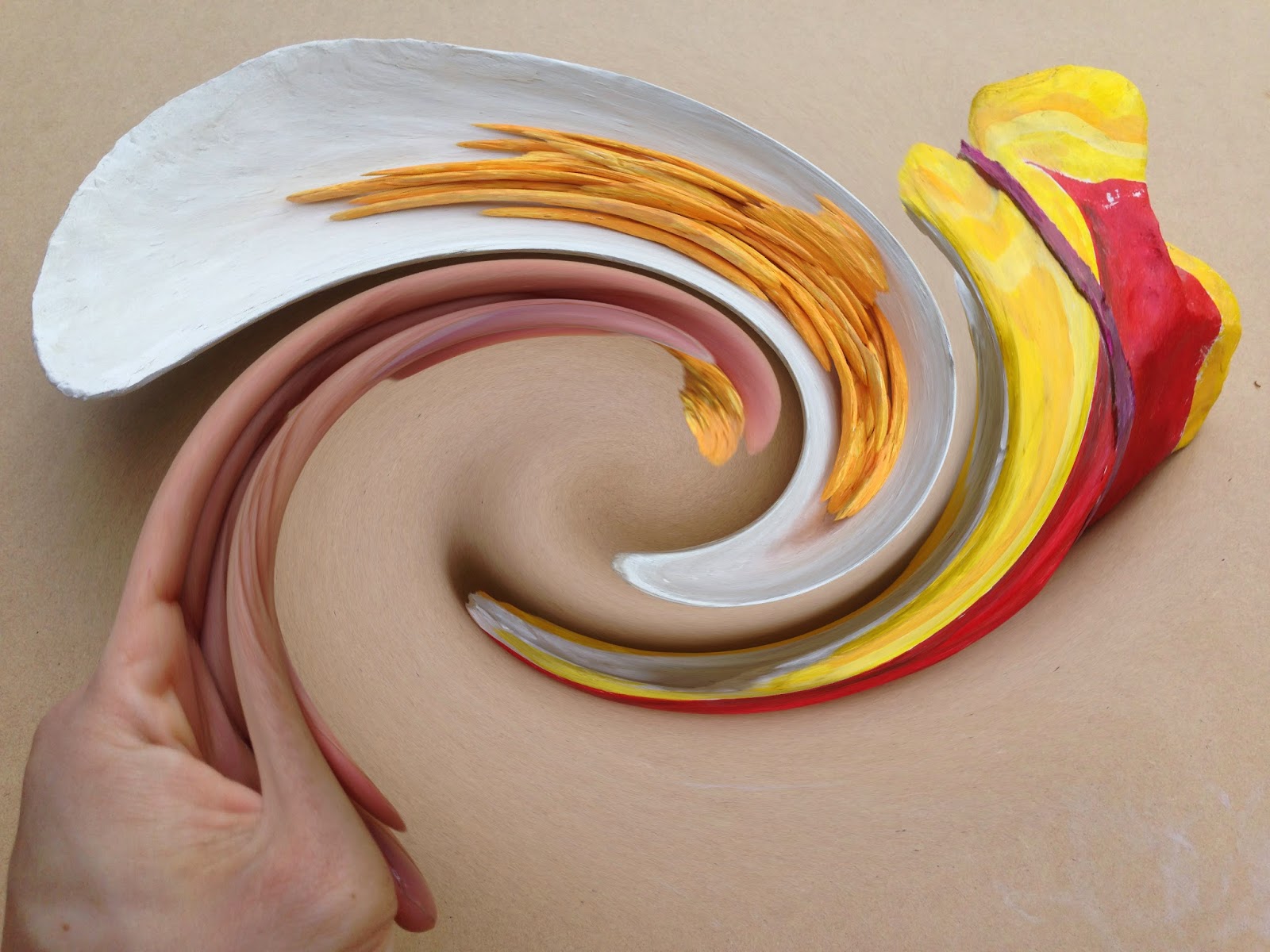 And so alright, that was the introduction, now it's time for a little story with a little twist, and it goes a little something, like this; recently my friend Tracey purchased six of my Twisties' sculptures. (Thanks heaps Tracey, very much appreciated!) At the time Tracey was doing a residency in Berlin but we decided I should send them now anyway and that way they'd be waiting for her when she got back.

I figured the best way to package the Twisties was to put them into an actual Twisties packet. I then wrote a little note and sent it all off in an envelope. 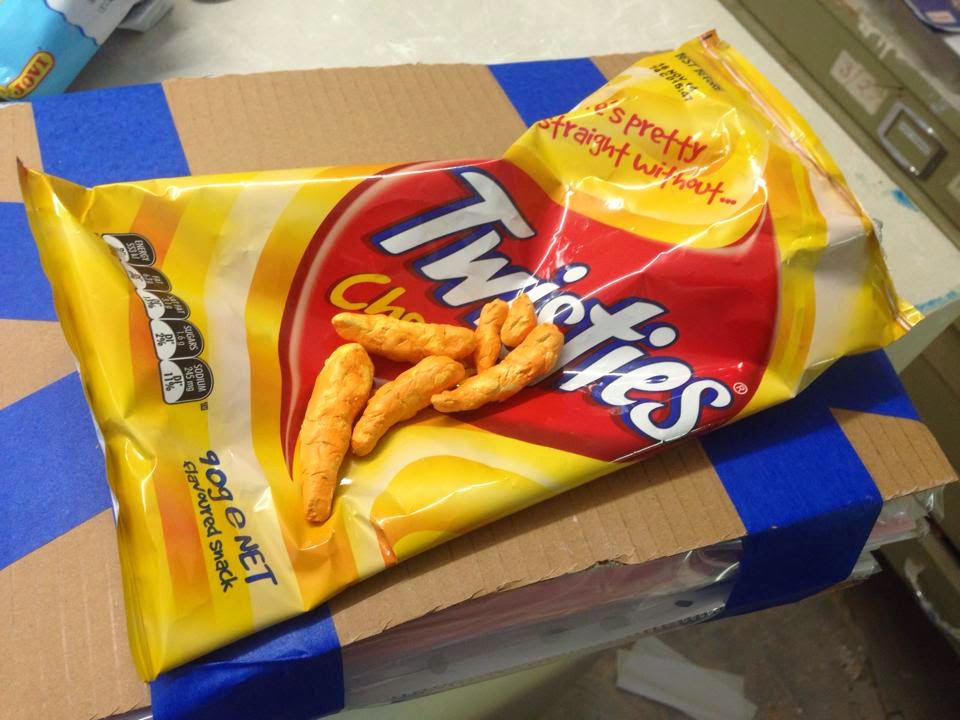 About a week later I received a very nice email from Tracey's husband saying that he'd received the letter and he'd kept the note but that he'd accidentally thrown away the packet of Twisties thinking it was rubbish and so could he please have some more.

On the one hand it was a little sad because I had picked out my very favourite sculptures to send and now they've completely vanished without a Tracey, but on the other hand, the much bigger hand with orange cheesy fingertips, it's not that sad at all, I think it's pretty darn funny.

What I like about it is it puts this image in my head of me eating Twisties while in line at the post office. I can picture it now, I'm there waiting to send Tracey a letter and by the time I get to the front of the line I've finished with the Twisties, so rather than bother trying to find a bin to put them in instead I just scrunch them into the envelope up against the letter. I figure Tracey'll probably be near a bin, she can just throw it out for me.

That's actually a pretty great idea, I should mail all my rubbish out to people. Imagine how much easier it would be to take the bins out on bin night if the bin was completely empty. And sure, if the bin was empty I wouldn't even need to take the bin out on bin night, but I still would anyway just to see the smile on the garbage mans face. And so you know what, yes, I now have a new business venture; Kenny Bintock's Junk Mail.

And so in edition to a handwritten note you might also receive a banana peel, a bad drawing I scrunched up, a parking ticket, the lid to a yogurt... who knows what junk you'll get, that's the fun!

Ha, wait, this is terrible idea actually, I'm having second thoughts, it's possible that no-one is going to want my rubbish and by suggesting that you might it's probably only going to encourage you to send me yours. It's so rare that I receive mail, ha, so imagine how disappointing it would be if one of the few exciting times I did it was a lid to someones yogurt.

What's the opposite to junk? Whatever that is, let's send that to each other.

Anyway so the end of the story is that of course I sent Tracey some more Twisties, they came out of the kiln earlier in the week and I glazed them up good and first thing tomorrow morning I'll post them.

This time though rather than put the Twistie sculptures into a real Twisties packet I decided to make my own painting/sculpture of a Twisties packet specifically for Tracey's husband, I changed the words in a few places though, and so where the real packet normally says Twisties Cheese on my packet it says Tracey's squeeze. 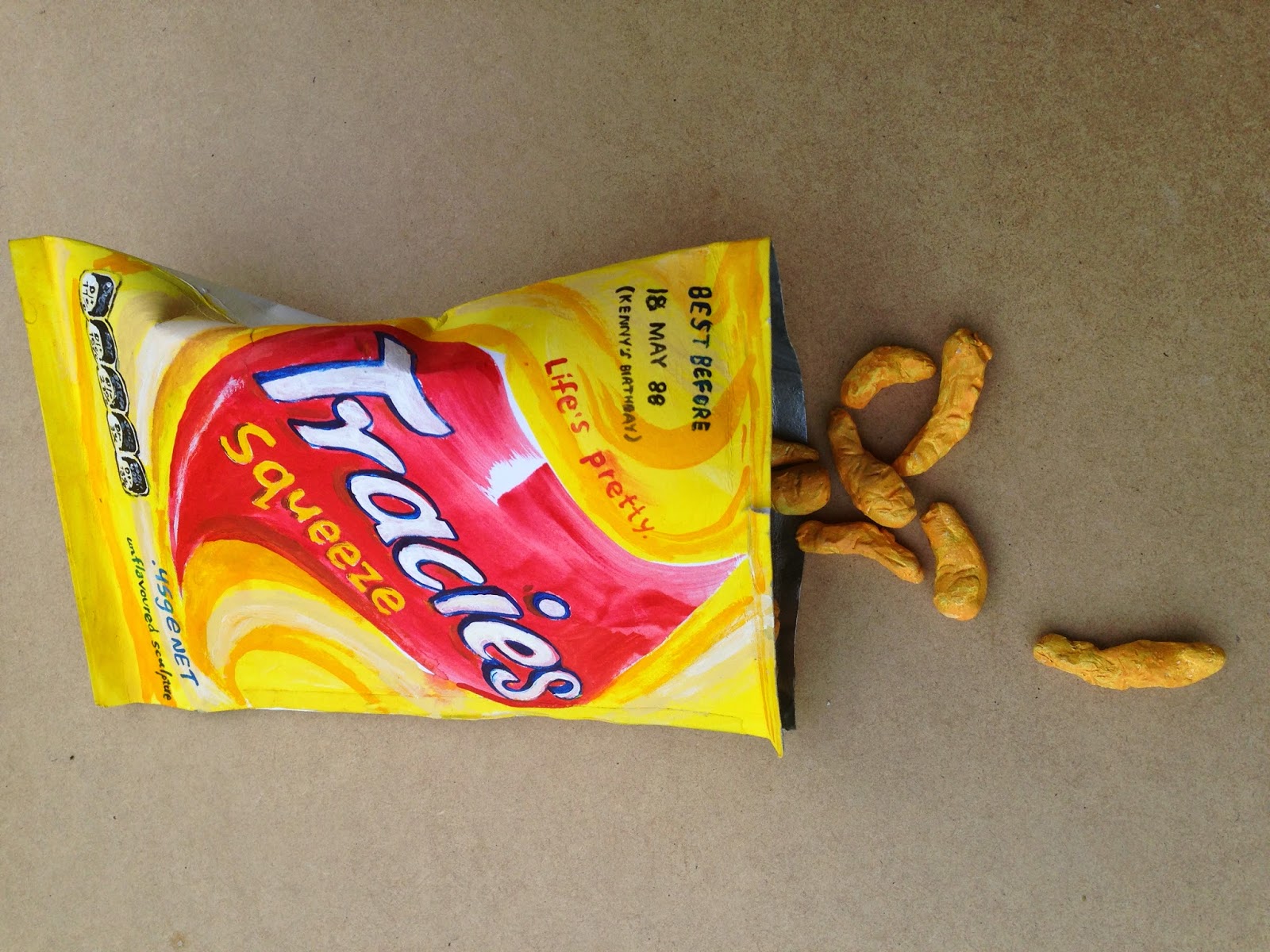 Here's a shot of it twisting about in a little alley falling in with a bad crowd and making friends with an empty packet of smokes and a crushed bottle of iced tea. 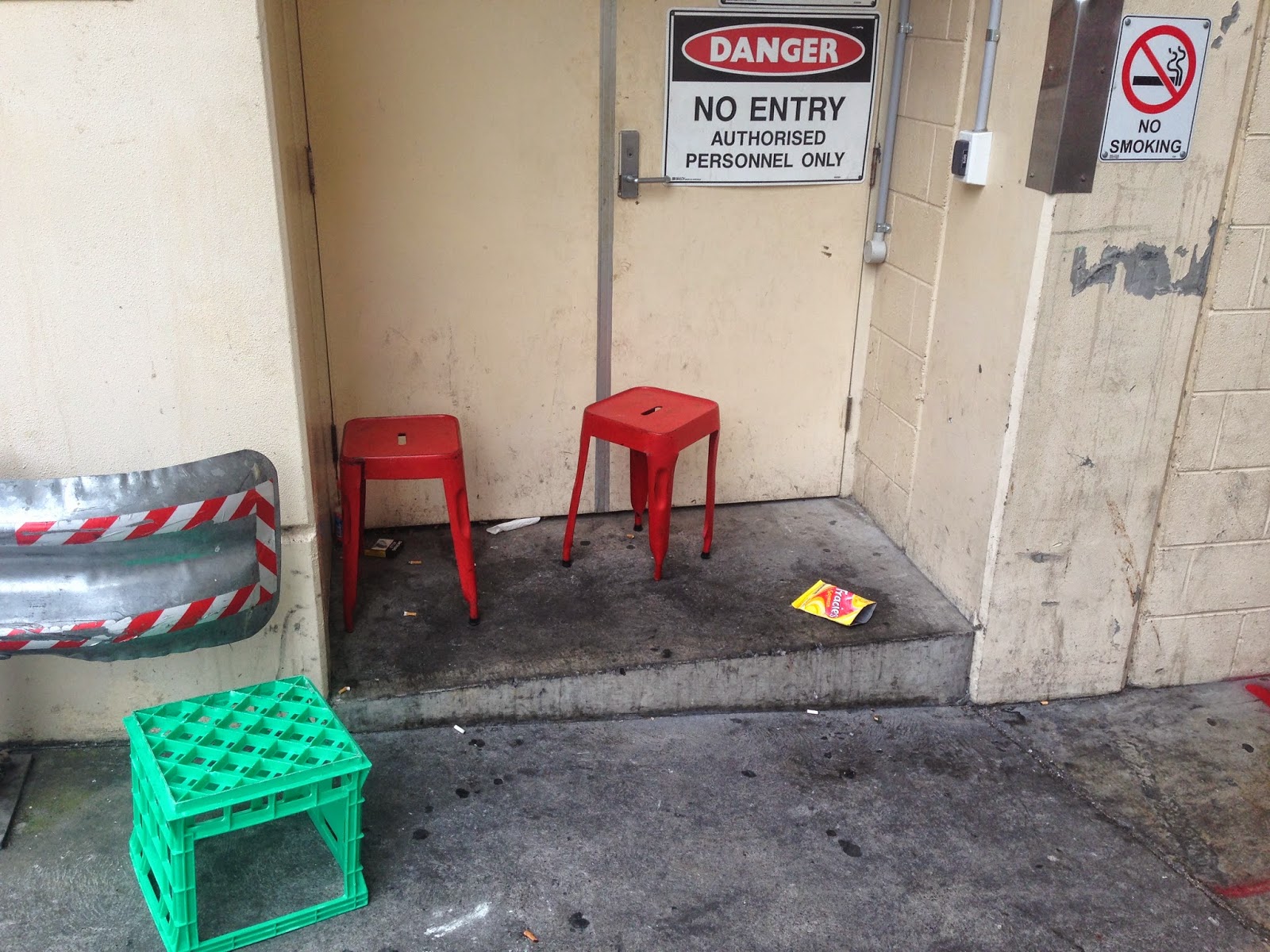 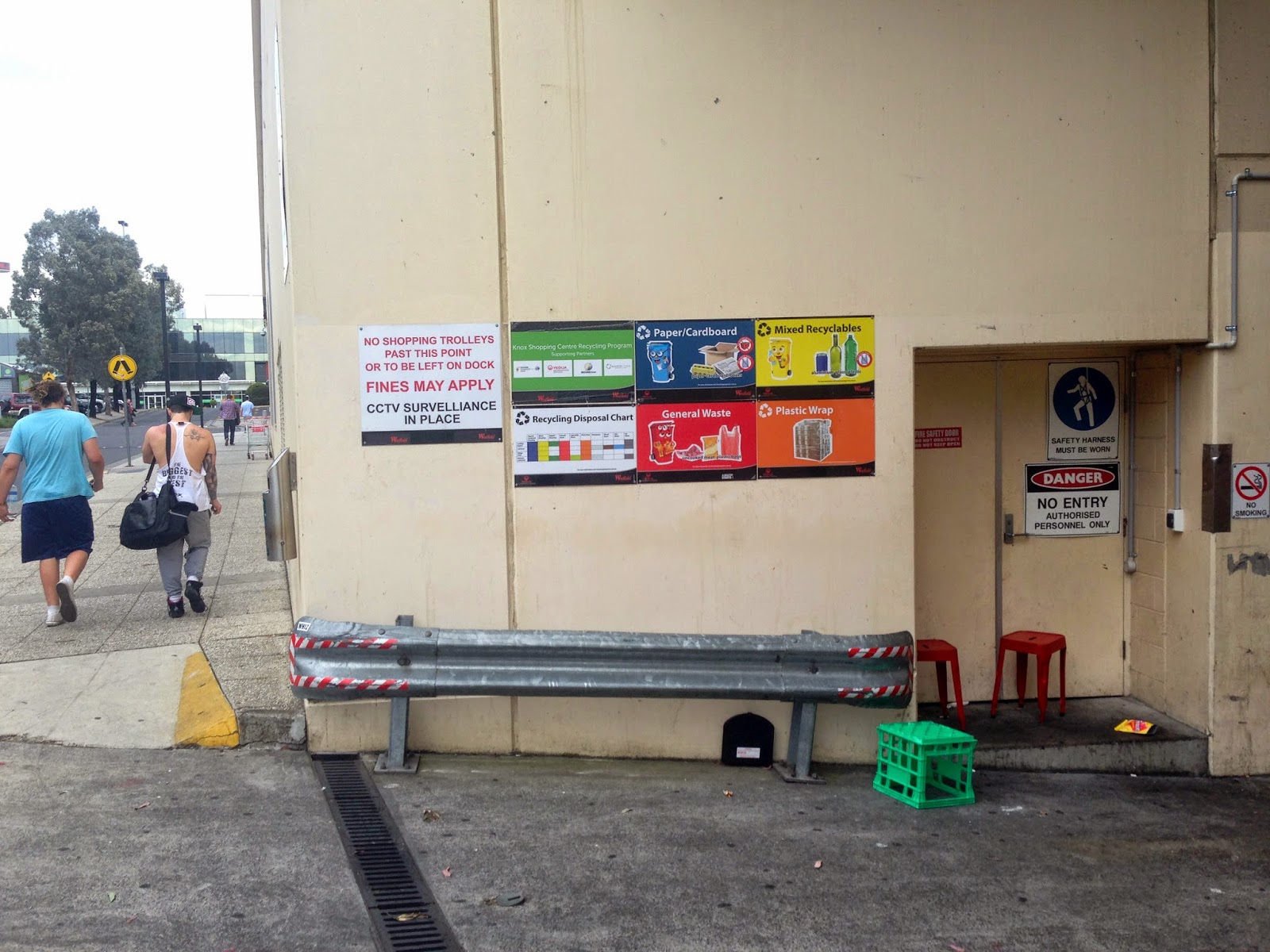 And here it is again, this time in my favourite supermarket, amongst much more suitable companions; 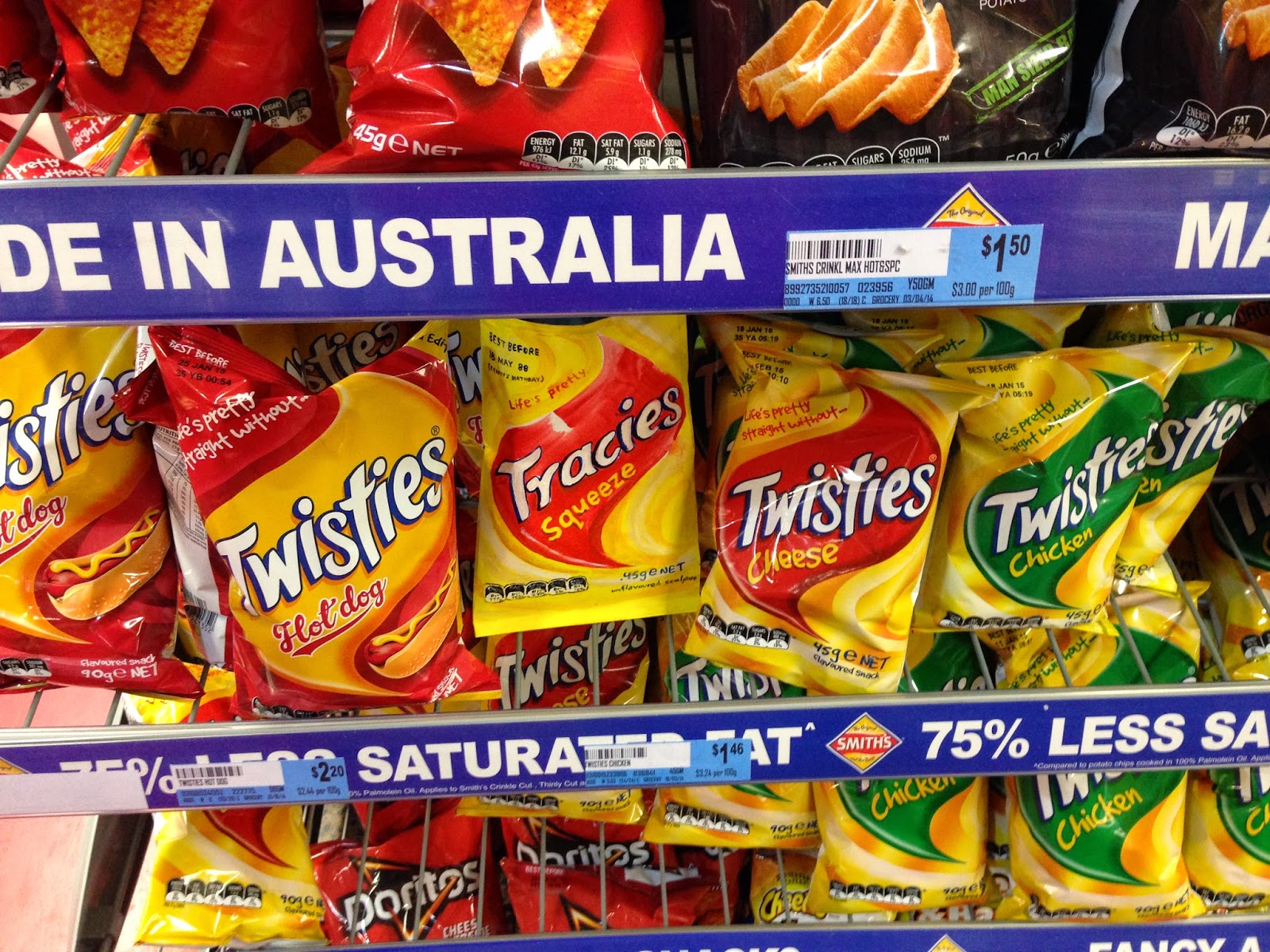 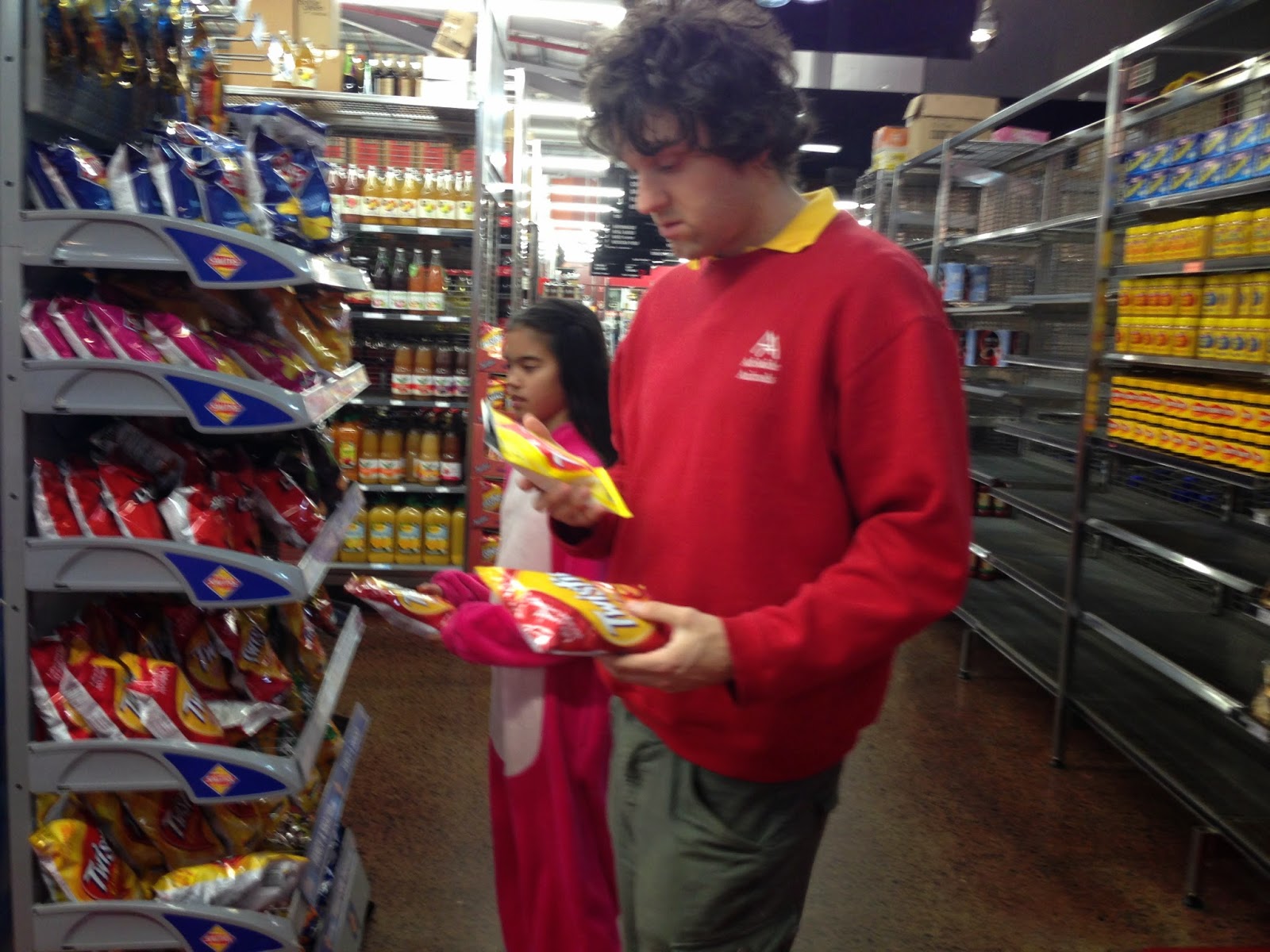 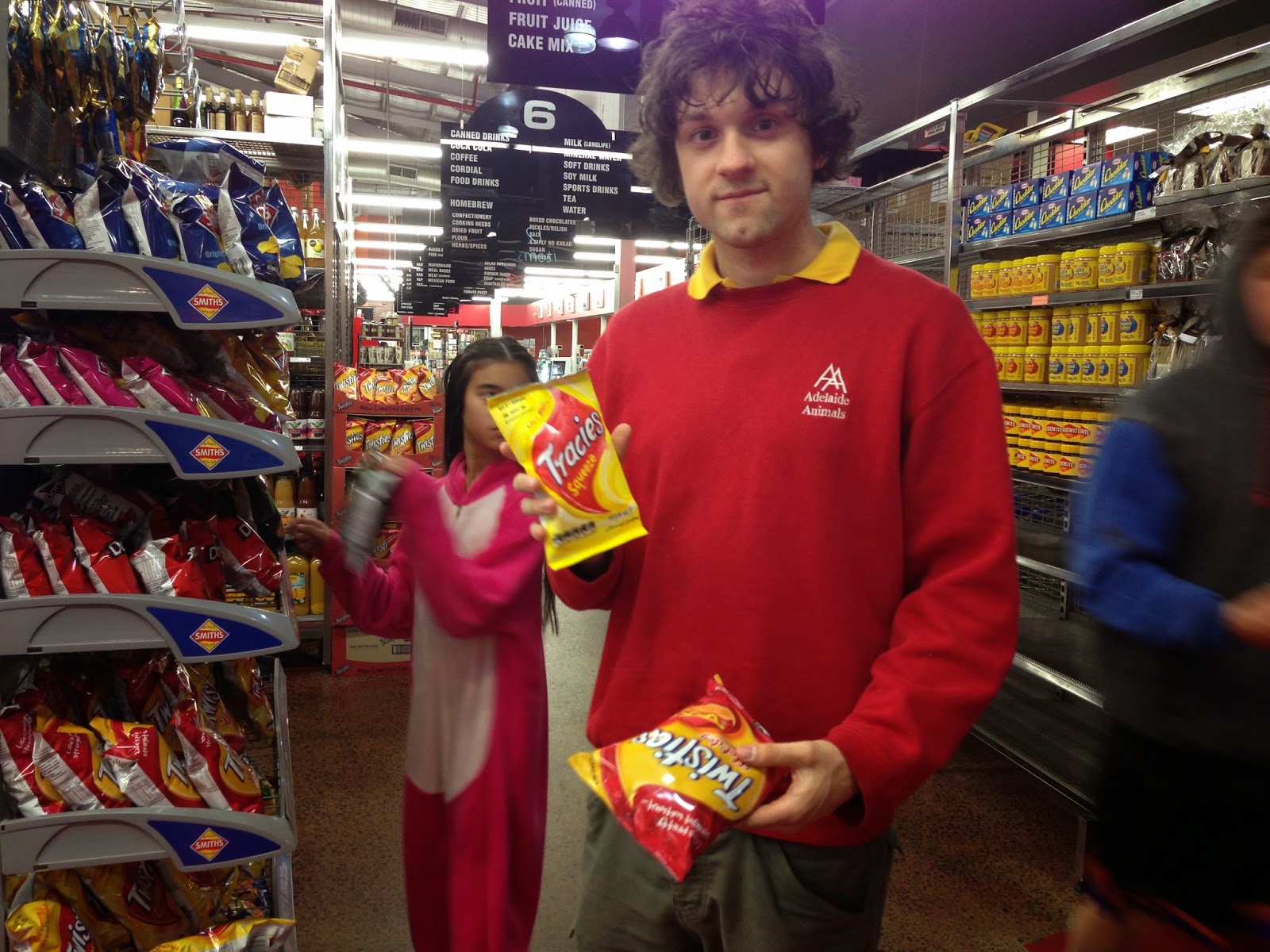 While I was at the supermarket I couldn't help noticing that for a limited time only they're now selling Hot Dog flavoured Twisties. Did you know about this? Then why didn't you tell me?!

I know they always say that ignorance is twist but I just had to know whether these Hotdog twisties really tasted like hot dogs, so I bought a pack.

Today is exactly 25 days from the City2Sea race that my buddy Alex and I are running in, and so in a last minute attempt at training for that on Sunday night Al and I went on a 4km hike up a mountain. When we finally reached the peak it was hotdog time.

And so here they are, hot dog flavoured Twisties in hotdog buns with mustard. 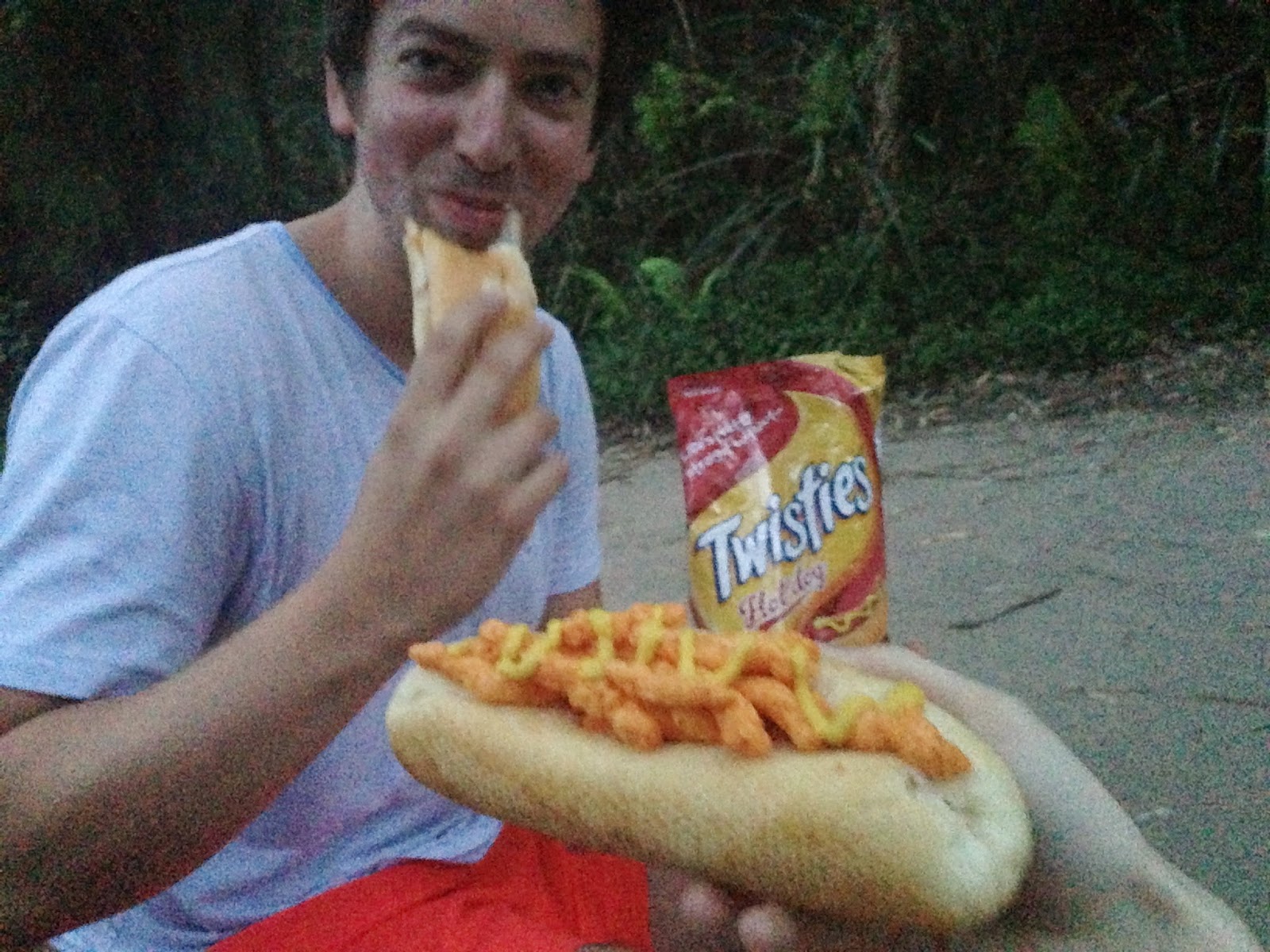 At this point a big boxing kangaroo hopped out from behind a tree so we asked her to please take a photo for us. 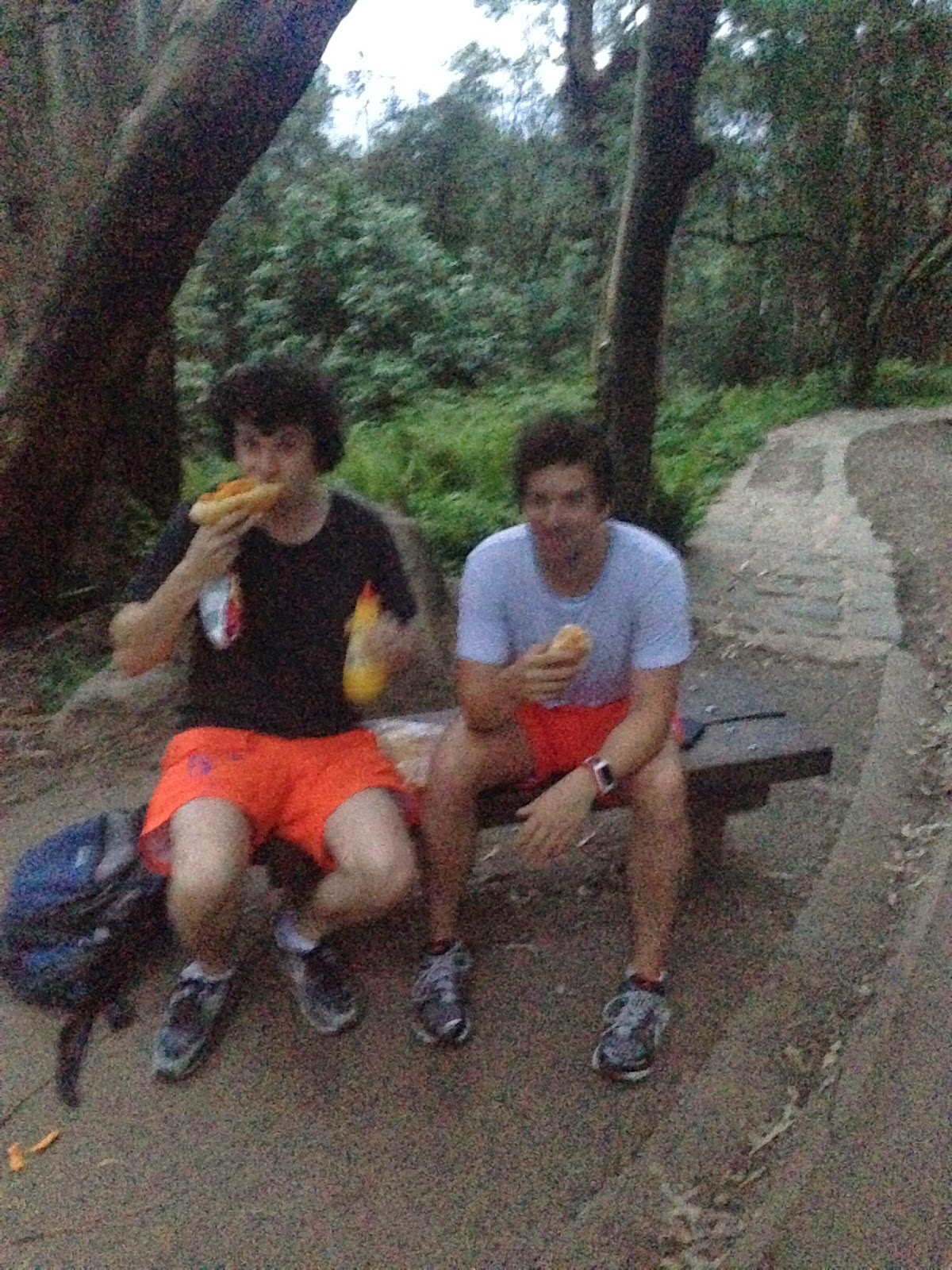 And here's another photo taken by her joey. 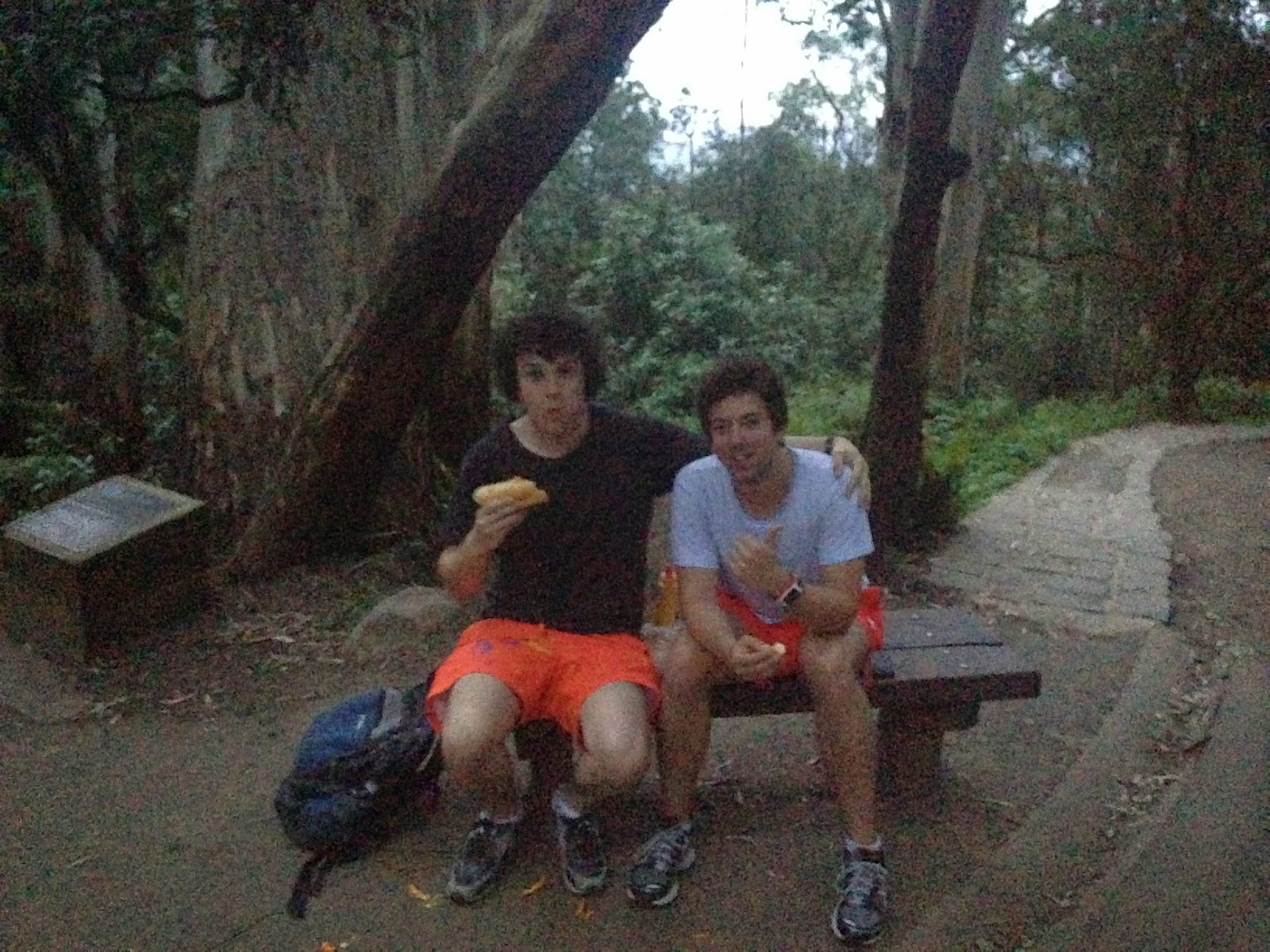 It kind of looks like we're about to be crushed by that falling tree behind us, but tree or no tree the hotdog flavoured Twisties were great. I think they actually do taste like hotdogs, ha, but maybe it's just all my head. They're very reddish in colour, at the very least I know that much isn't in my head. 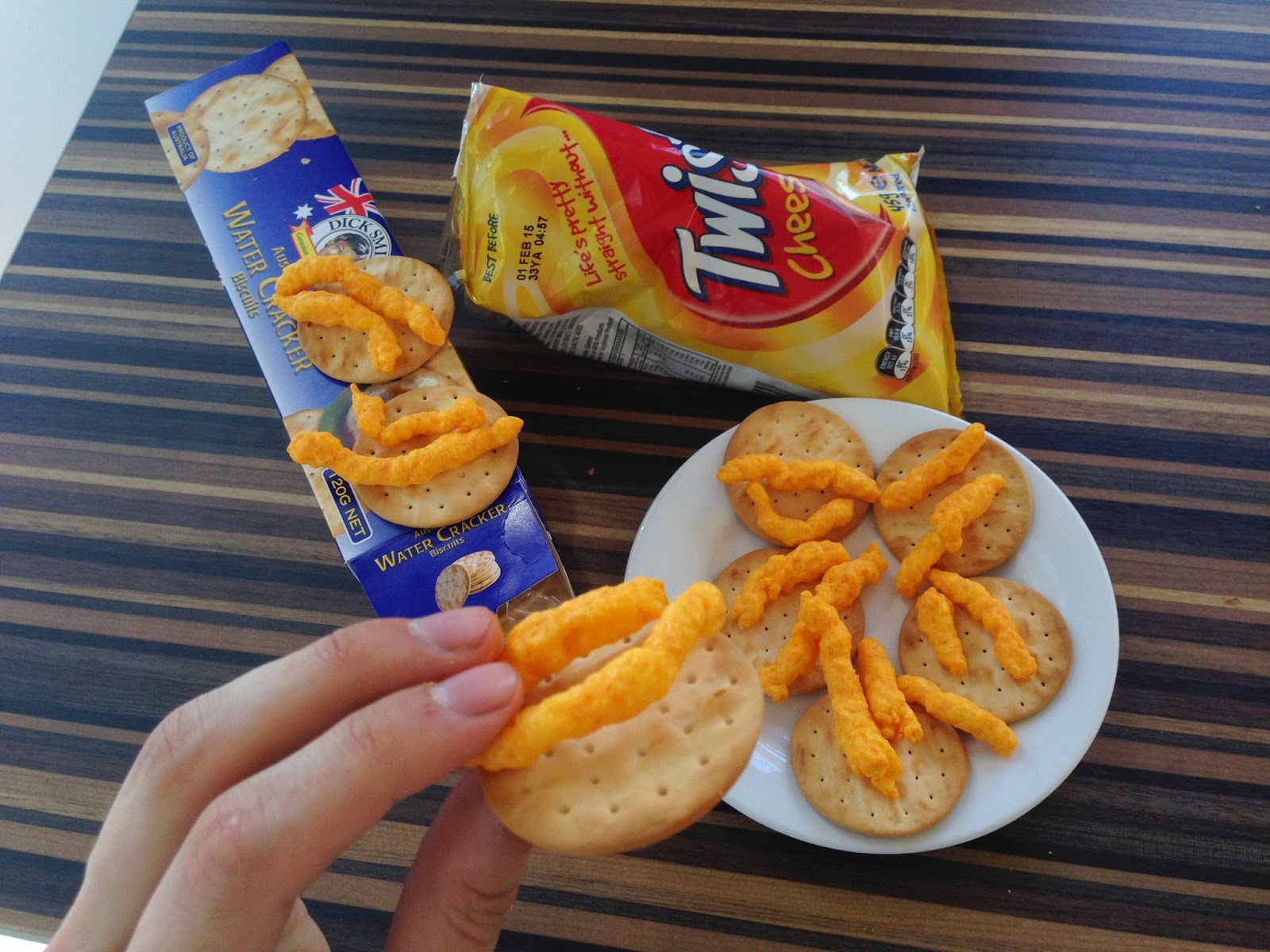 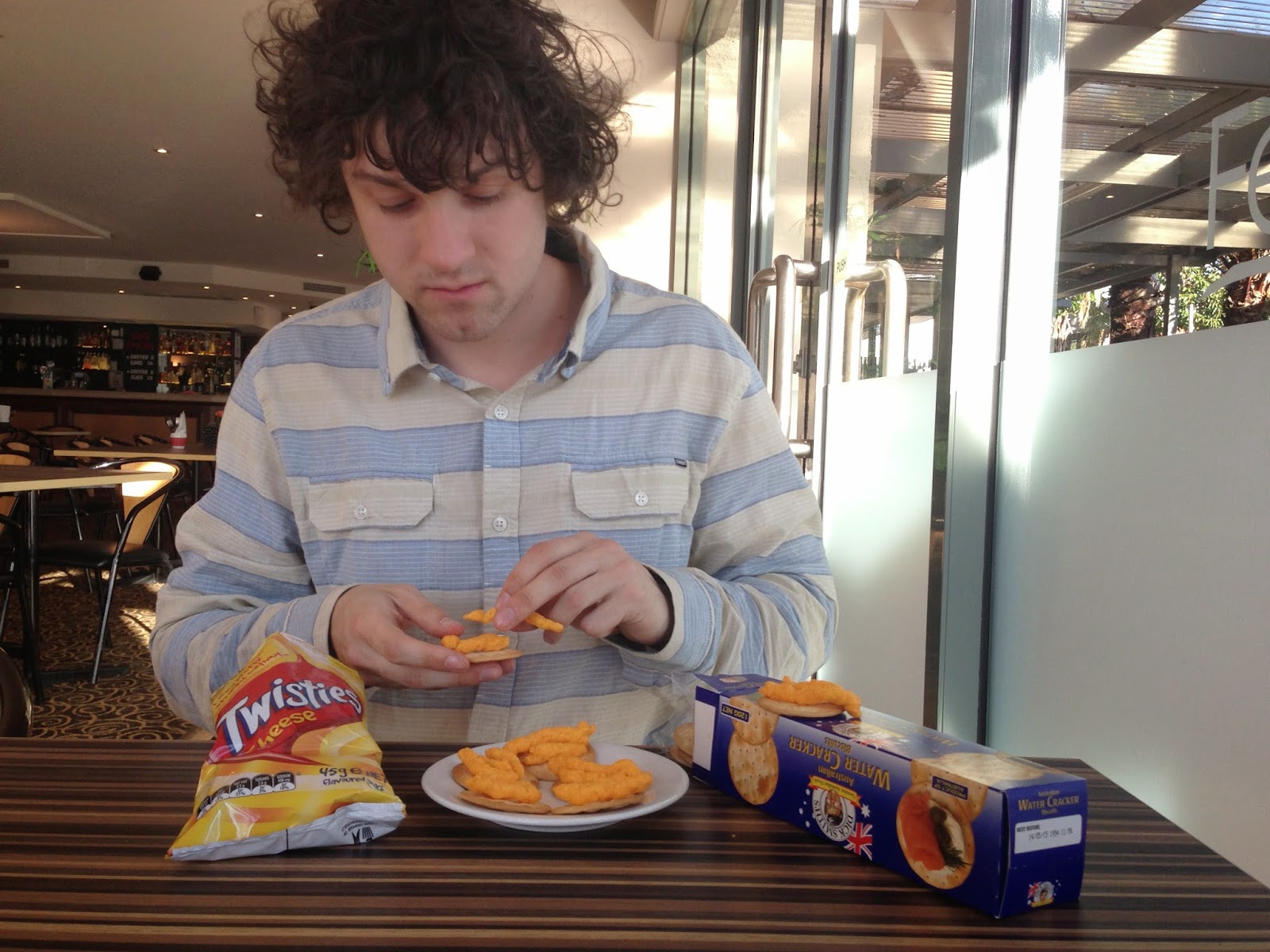 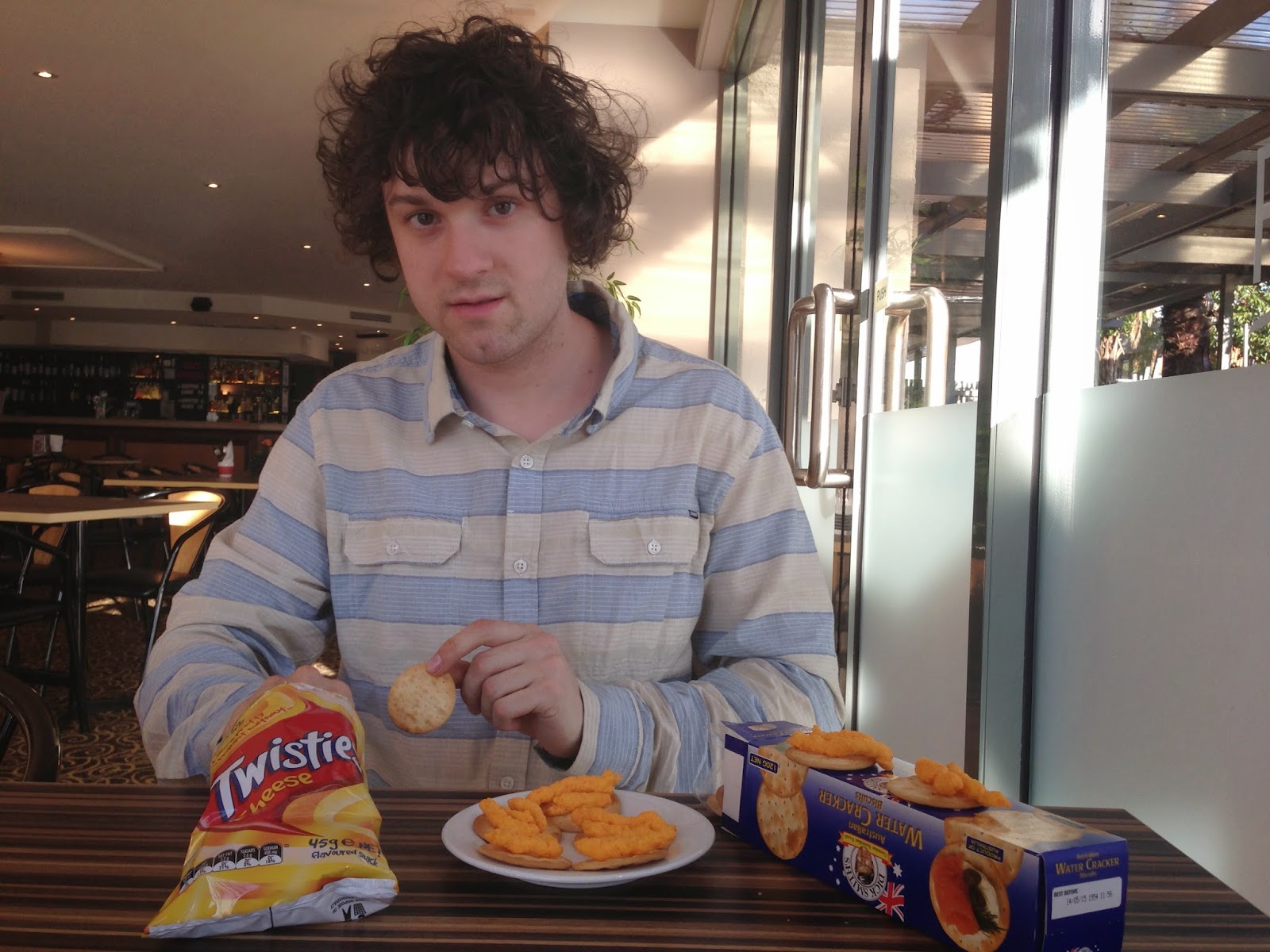 And finally, the inevitable next step, a Chicken Twisties parmagiana. 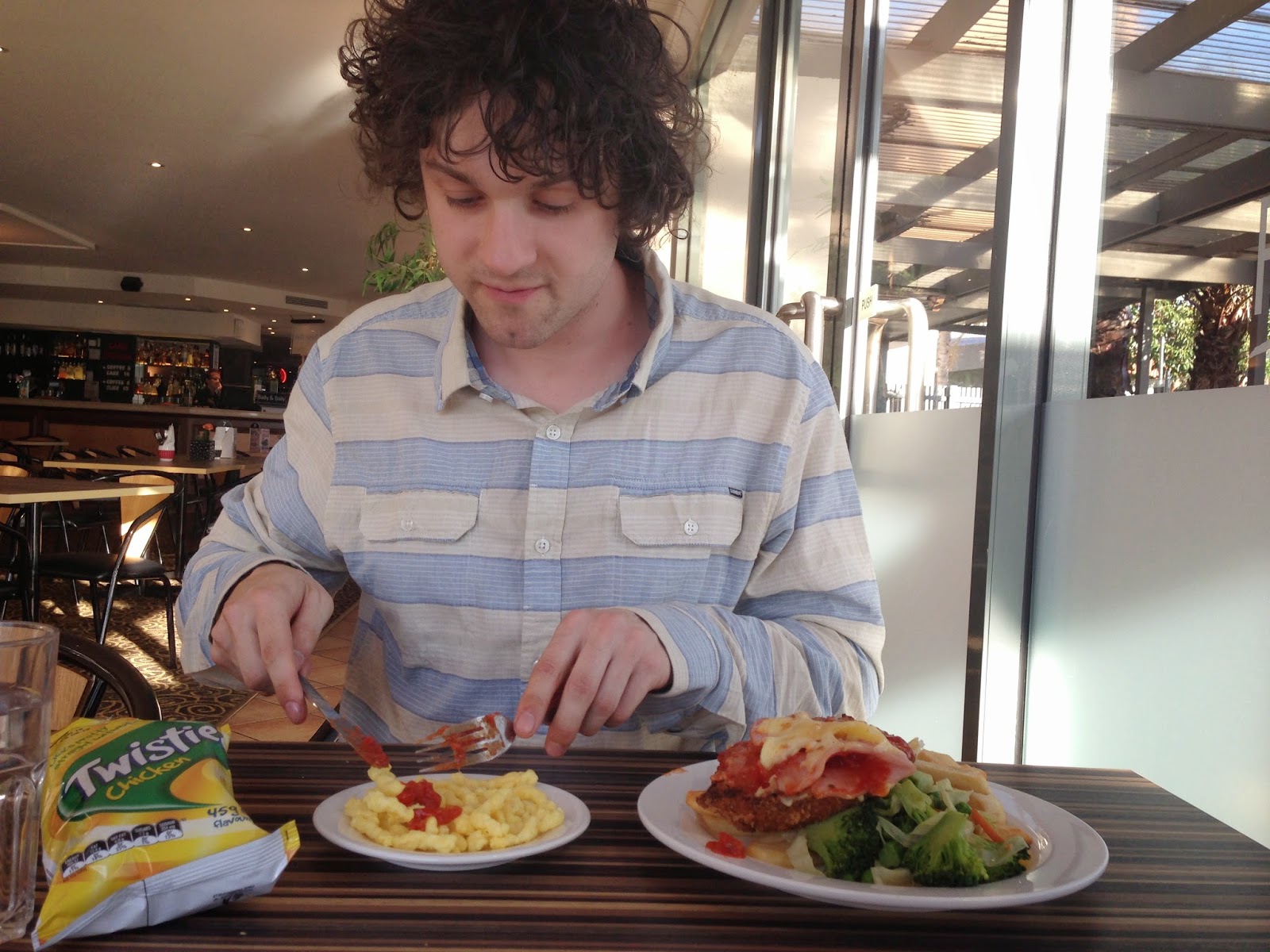 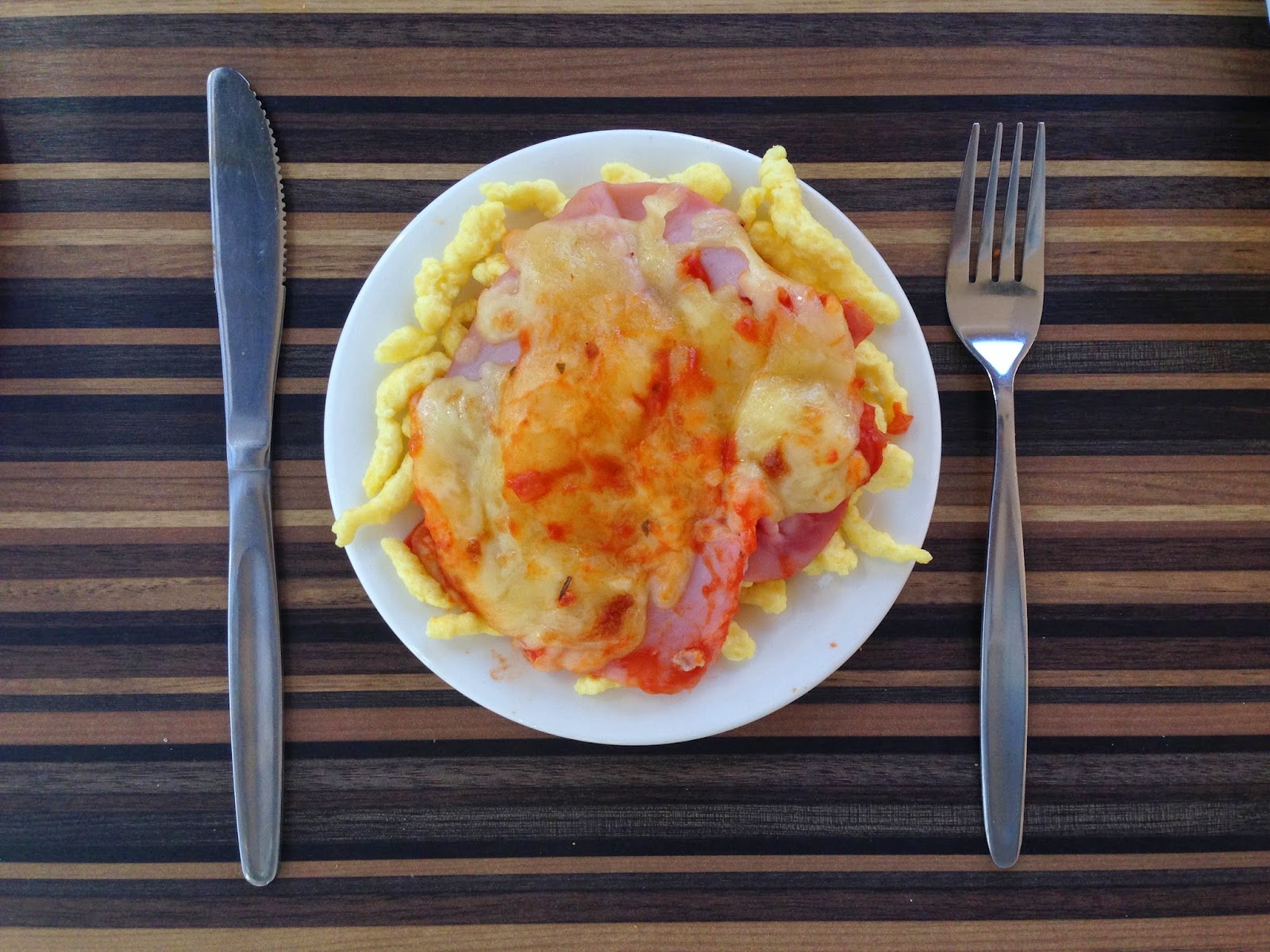 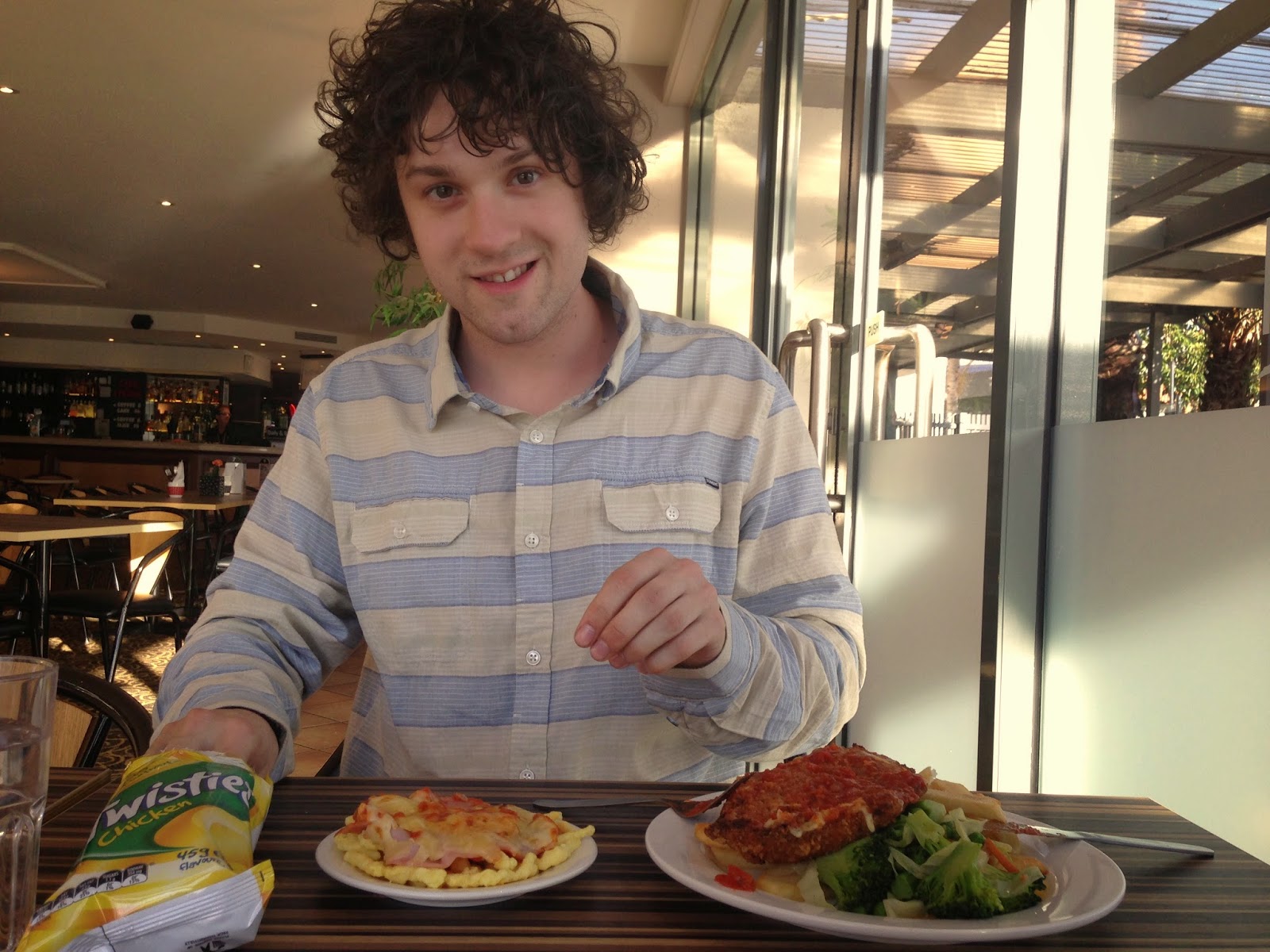 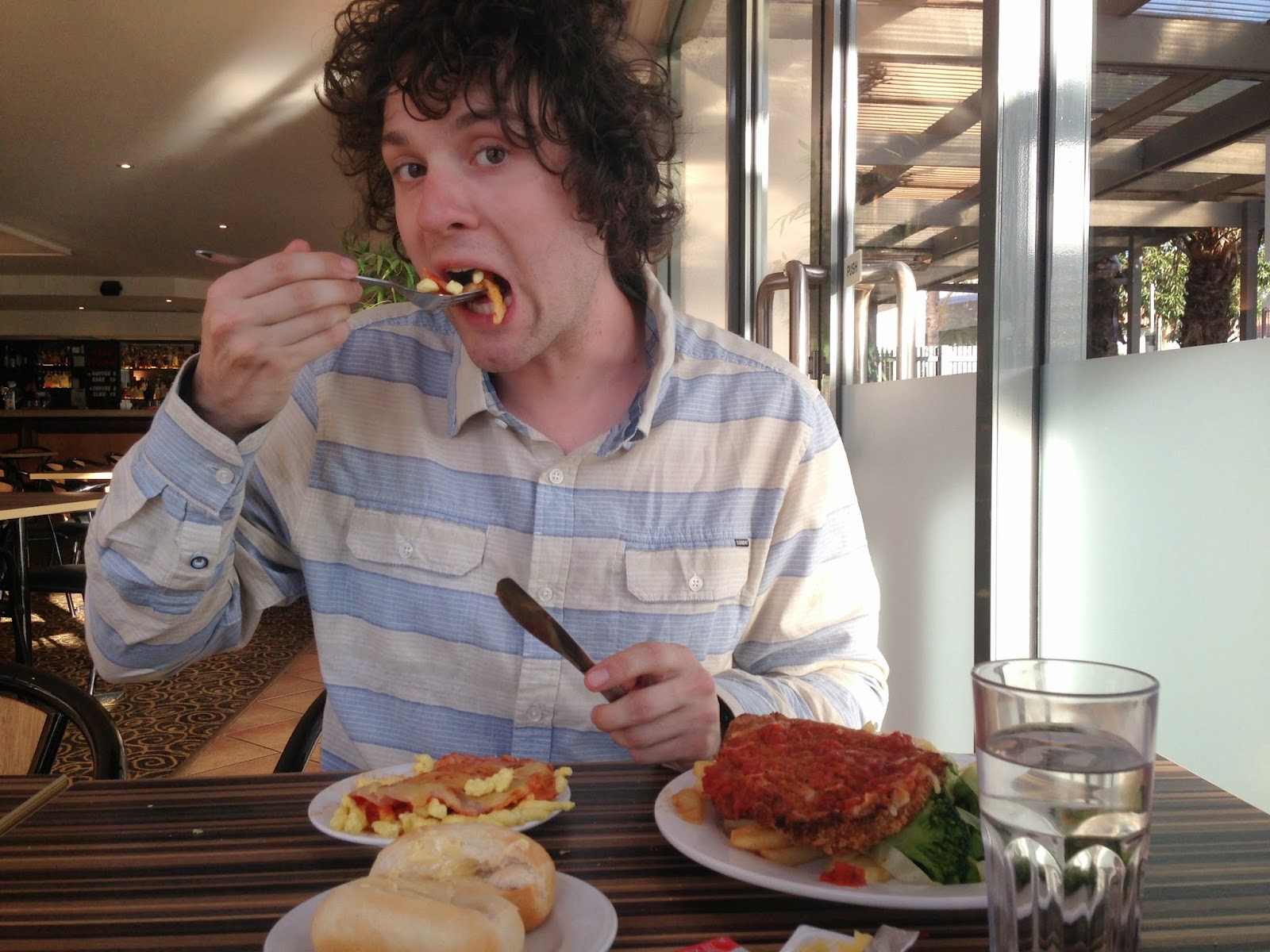 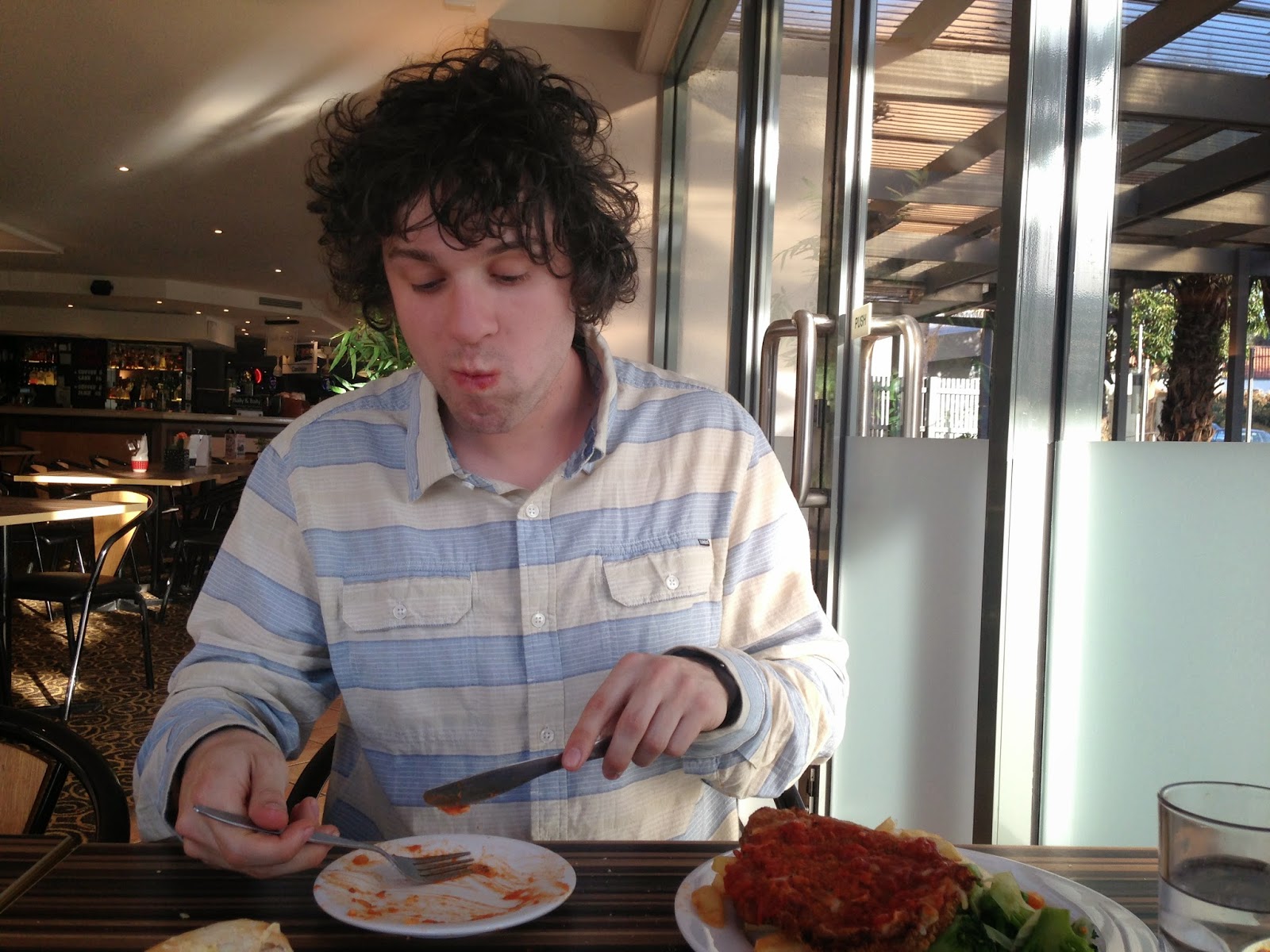 One final note note about Twisties, because I am currently learning Italian, did you know that in Italy Twisties are called Fonzies?

(I would amore to try them, so salve to any italiano readers out there, and if possible, per favore?)

Here's a photo that I found online of some guy holding a packet of Fonzies. 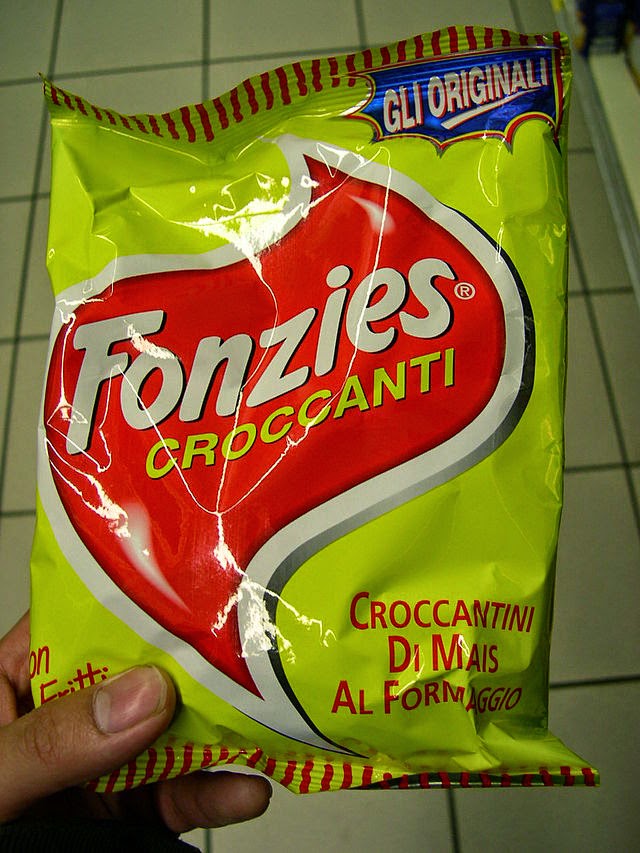 And to finish it off, eeeeeeeeeeeeeey presto, here's a drawing I just did of Fonzie eating Fonzies. 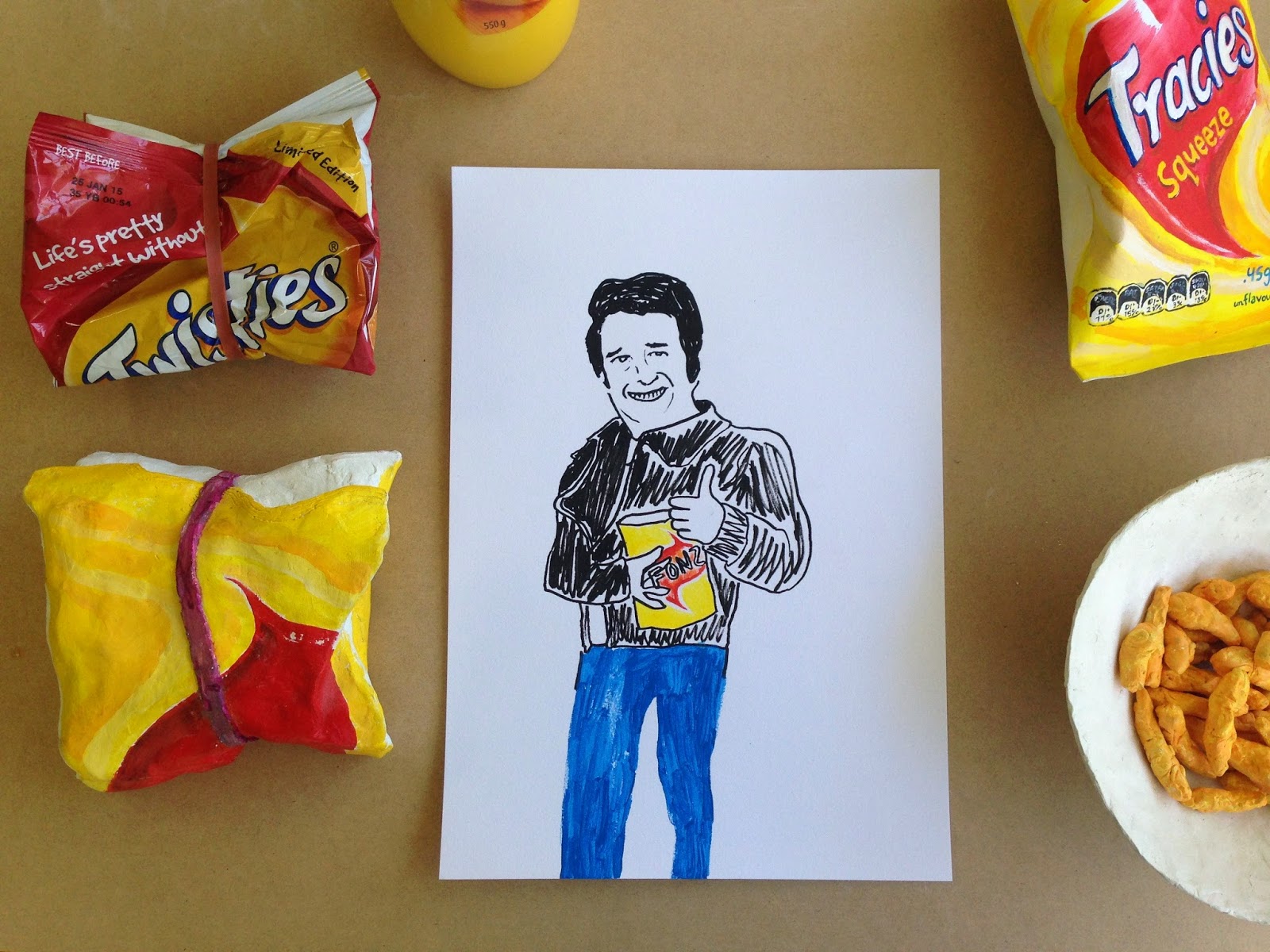 PS. For a second there I was considering throwing out my drawing of Fonzie eating Fonzies but I don't think I will, I think instead I'll keep it around just on the off chance that maybe you feel like signing up to Kenny Bintock's Junk Mail. 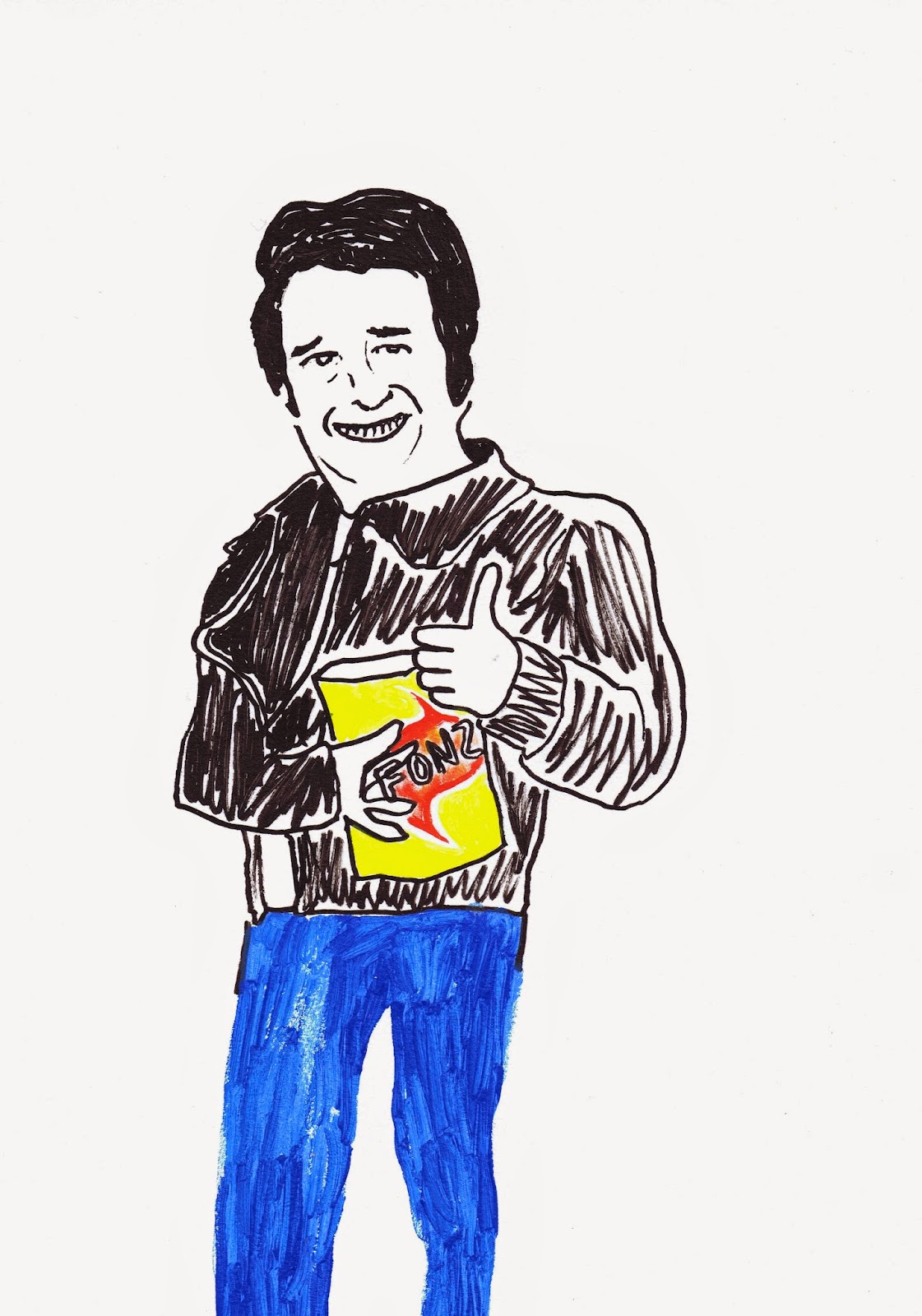