And it was all yellow (Part two)

Hey pal, so in keeping with the spirit of vandalism and yellowism from my last post, you may or may not have heard that at the start of this month both Melbourne Town Hall and the Victorian Parliament House, pictured below, were spraypainted with swastikas. 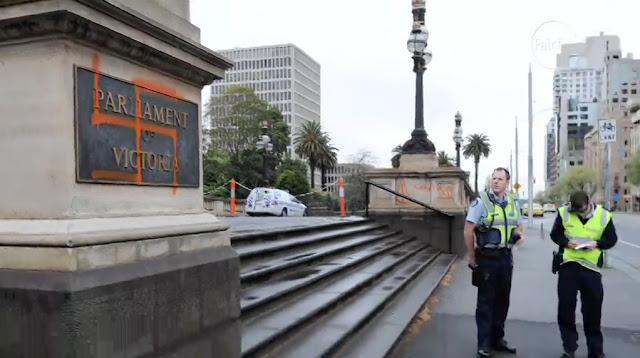 Much like yesterday's defaced Rothko painting, nobody has been charged for these acts of vandalism.

Police say the CCTV footage shows that the culprit appears to be a medium built man in his late thirties wearing a dark hooded top, so that narrows it down. He's about 180cm tall, and depending on what article you read, he may or may not have a beard.

Senior Sergeant Ian Lindsay said the suspect could face a possible jail term. "These types of incidents we’ve seen today are isolated, it's obviously someone trying to get a message out. How silly that message is is reflective on the type of slogans that were placed," he said.

Senior Sergeant Lindsay described the attack as "senseless and demeaning".

Premier Ted Baillieu described the graffiti on the two buildings, showing swastikas and words including United Nations and NATO, as ignorant, stupid and offensive.

So far as I can tell though, what Ballieu and Lindsay and everyone else on the internet isn't aware of is that the swastika was also painted onto a third Melbourne icon.

Somebody painted a swastika onto the Yellow Peril! It's ok though everybody, I took care of it.

All the quotes I used in this blog post are from the Age and Herald Sun websites, as well as 3aw.com.au and news.com.au. The two images at the top are from Fairfax Media, and the video was filmed by my buddy Dan Petersen.

As an afterthought, my other buddy Amy informed me that the swastika doesn't necesarilly represent Nazism, and that it's also the Buddhist symbol for eternity. I did a quick google image search and found this. 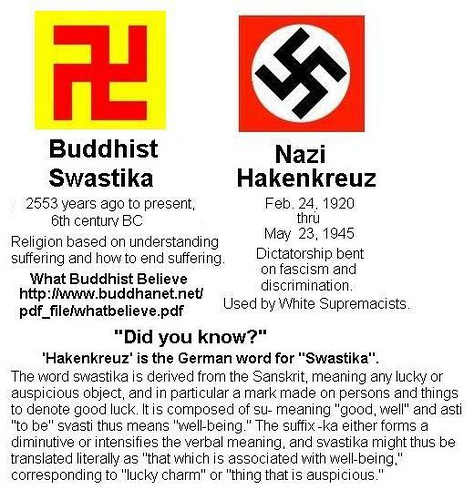 And so there you go, according to the image above the Buddhist symbol sits straight and the Nazi one is on an angle.

If you go back over the images you'll see that all of the symbols spraypainted around Melbourne appear to be straight, and so if I'm as good a detective as I think I am, then it's clear to me that technically the spraypainted swastikas appear to done by Buddists.  Maybe. I'll keep you posted.
Posted by Kenny Pittock